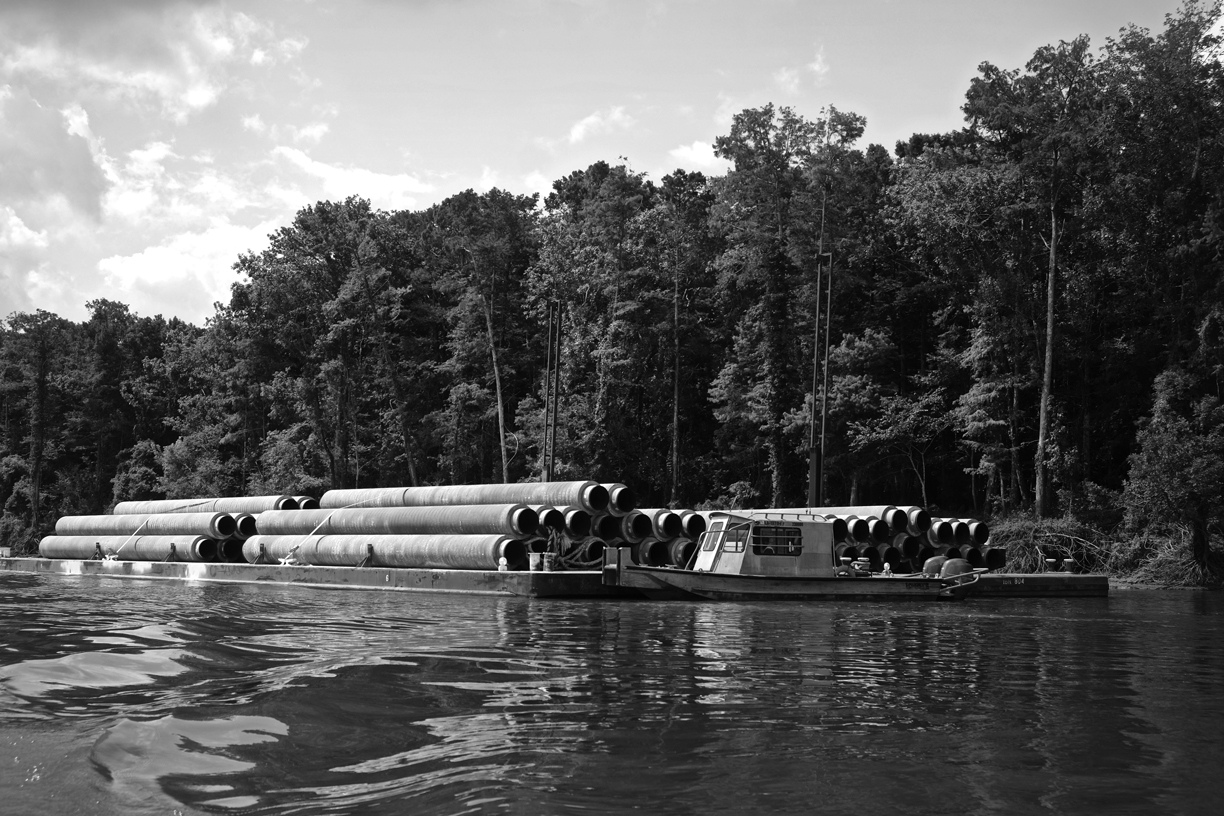 It’s August and the sugarcane has grown up to the eaves of the ranch-style houses spread across St. Martin Parish. As an elderly woman makes the long walk down a driveway to the mailbox, the area feels quiet, hot, and remote. Numerous Virgin Mary statues adorn the front yards of the parish. At its eastern edge, every road except for the I-10 dead-ends into a giant levee towering over everything.

Early in July, pipeline protesters took their fight against the Bayou Bridge Pipeline across that levee and into the Atchafalaya Basin. They’re called the L’eau Est La Vie Camp (“Water is Life”): a relatively fluid group of people from Louisiana and elsewhere in the U.S. who have flocked to the largest river swamp in the United States as Energy Transfer Partners lays its pipe into the swampy ground there. It’s an apt but difficult place for the water protectors, as they prefer to be called. The swamp encampments are a half-hour boat ride or more from the nearest road. They’re surrounded by spiders, gators, forest, and water, as well as pipeline workers and the armed guards hired to protect those workers. Asked what it’s like to be out there overnight, one protester talked about the clear skies and the Perseid meteor showers visible earlier in August. Another protester described overhearing a local airboat driver tell his passengers, who worked for the pipeline, that the Atchafalaya is a place where “anything goes.” Later, the water protector said, the same boat driver showed up at the encampment with multiple firearms. He scattered hog feed around the tents and told water protectors, “I’m going hog hunting.”

On August 14, the camp posted a Facebook update stating, “Over the past several months we have deployed over 50 worksite actions to disrupt and stop construction of the Bayou Bridge Pipeline. We are also on day 35 of continuous blockades in the Atchafalaya Basin.” They had done so using tactics that ranged from tree-sits in the cypress canopy to kayak protests in various waterways. But it’s come at a certain cost. On August 9, water protectors in kayaks were reportedly blown into the pipeline easement by the power of a fan boat’s air column. The paddlers were then forcibly removed from the water by security officers operating the fan boats. Cindy Spoon, one of those arrested, said later in a recording posted online that the airboat security detail was made up of officers who were hired by the pipeline company. She said in the video, “I was asking over and over again… what department do you work for, what jail are you taking me to, what am I being arrested for?” The security personnel did not answer. She said they placed her in “string cuffs, like rope,” and detained her on the pipeline easement until St. Martin Parish Sheriff’s deputies later arrived to arrest her and two others. “ETP security was allowed to assault us, restrain us, detain us, and then hand us over to the police, and the police just arrested us without question,” she said.

“I don’t understand how this out-of-state pipeline company can come in and take control of our municipalities and our law enforcement agencies and then use them like a puppet to attack the people who are from here, live here, or are guests of those people.”

Spoon said in the recording that the security personnel wore badges that said “probation and parole.” And in a recent interview with The Intercept regarding the arrests, Ken Pastorick, the communications director for Louisiana Department of Public Safety and Corrections, said that the director of his agency had in fact authorized 50 of its officers to work as security agents for HUB Security, a private security firm that is contracted by the the pipeline company. Pastorick said that these officers “have the ability to enforce the law in Louisiana even when off-duty and working extra-duty security details.” But by August 14, five days after the kayak arrests, he said, none of the agency’s officers were employed with the pipeline company’s security contractors.

Bill Quigley is an attorney providing legal aid to the water protectors and spoke to me about the arrests. Those arrested were paddling in navigable waterways, which, he said, “are defined in Louisiana as public right-of-ways.” The issues with the private security contractors are legally murkier, he said, but no less troubling. “I think it creates a real potential for abuse of power when state employees in state uniforms with state weapons and state gear are available to anybody who pays for them to show up. I think we’re going to have a lot of disputes about that in this case,” he said.

Ten days later, freelance journalist Karen Savage was reporting on a Saturday morning from a forested area near the center of the Atchafalaya Basin. That piece of land is the subject of a lawsuit filed in July by Peter Aaslestad, one of the owners of the land, against the Bayou Bridge Pipeline. The lawsuit alleges that Bayou Bridge had begun digging and operating on the property without the legal permission of Aaslestad or his siblings. Savage said in an interview that another land owner, Theda Larson Wright, had given written permission to the water protectors to protest on the property. They had erected a “skypod,” an aerial platform designed to stop work, in a tall cypress at the edge of the property near the pipeline easement.

Despite identifying herself as a journalist and having Wright’s written permission to be on the land, Savage said, two St. Martin Parish Sheriff’s deputies approached and arrested her for trespassing on the property. Law enforcement reportedly received complaints about the protesters from other people with ownership claims on the property. Three other water protectors were also arrested that day. The following day, another water protector and a treesitter were arrested after numerous sheriff’s deputies raided the land in question and forced the skypod-sitter from the platform in the cypress.

The St. Martin Parish Sheriff’s Office declined multiple requests for comment on the arrests. Savage said, “I was shocked that they are arresting people on private property when people arrested had permission of the landowner to be there.” She added, “As a reporter, if law enforcement or a policeman can suddenly tell reporters, ‘Hey this is private property, you can’t be there,’ that’s got huge implications for all kinds of reporters. You know, those first amendment rights that we enjoy—freedom of the press—that’s already being eroded.”

The issue that is alarming protesters and civil liberties organizations about these cases is that all eight of those arrested were charged with violations of a newly-passed law that makes trespassing on pipeline construction sites a felony offense. The law, HB727, is similar to legislation pushed in state houses across the country, in the wake of Standing Rock, to curb pipeline protests. HB727 is part of a larger wave of antiprotest laws proposed nationally in the last two years. According to The International Center for Not-for-Profit Law, since 2016, 31 states have considered 64 bills that restrict the right to protest in some form.

Quigley is amazed at the way the new law has been used. “I don’t think the legislators who passed this law thought people would be arrested for being on private property with permission or being on public waterways,” he said. “It’s like being on the public sidewalk. You shouldn’t be arrested for that.”

He thinks the law is vulnerable to legal challenges and that the cases of those arrested will be the first to test it. “When laws infringe on the ability of people to speak and act and protest, they have to be looked at extra carefully. And clearly, the whole goal of this law was aimed at protesters, and the way that it’s been enforced has been all over the place,” he said.

Meanwhile, the L’eau Est La Vie camp appears to be staying its course. The recent actions of law enforcement seemed to both rattle and energize the camp. A couple of days before we spoke, Cherri Foytlin, an organizer of the group, had been awake for 27 hours, pursued by police during the raid on the camp and the skypod. “That swamp is a living, breathing, moving thing,” she said. The private security arrests and the raids on private property, she added, were more evidence of what she wants to change by resisting in Atchafalaya Basin. “You know what I don’t understand?” she said, “I don’t understand how this out-of-state pipeline company can come in and take control of our municipalities and our law enforcement agencies and then use them like a puppet to attack the people who are from here, live here, or are guests of those people.”

Back near her home in Acadia Parish, she pointed towards some shorter grass growing over the place where the pipeline had recently been installed along a twolane highway. In June, attorneys for the pipeline company reported that 100% of construction would be complete by October of this year. The injunction hearing for Peter Aaslestad’s lawsuit against the company is September 10.

For more info on the protests and actions against the Bayou Bridge Pipeline and the status of the L’eau Est La Vie camp, check out nobbp.org, @LeauEstLaVie (Facebook), and @NoBayouBridge (Twitter).