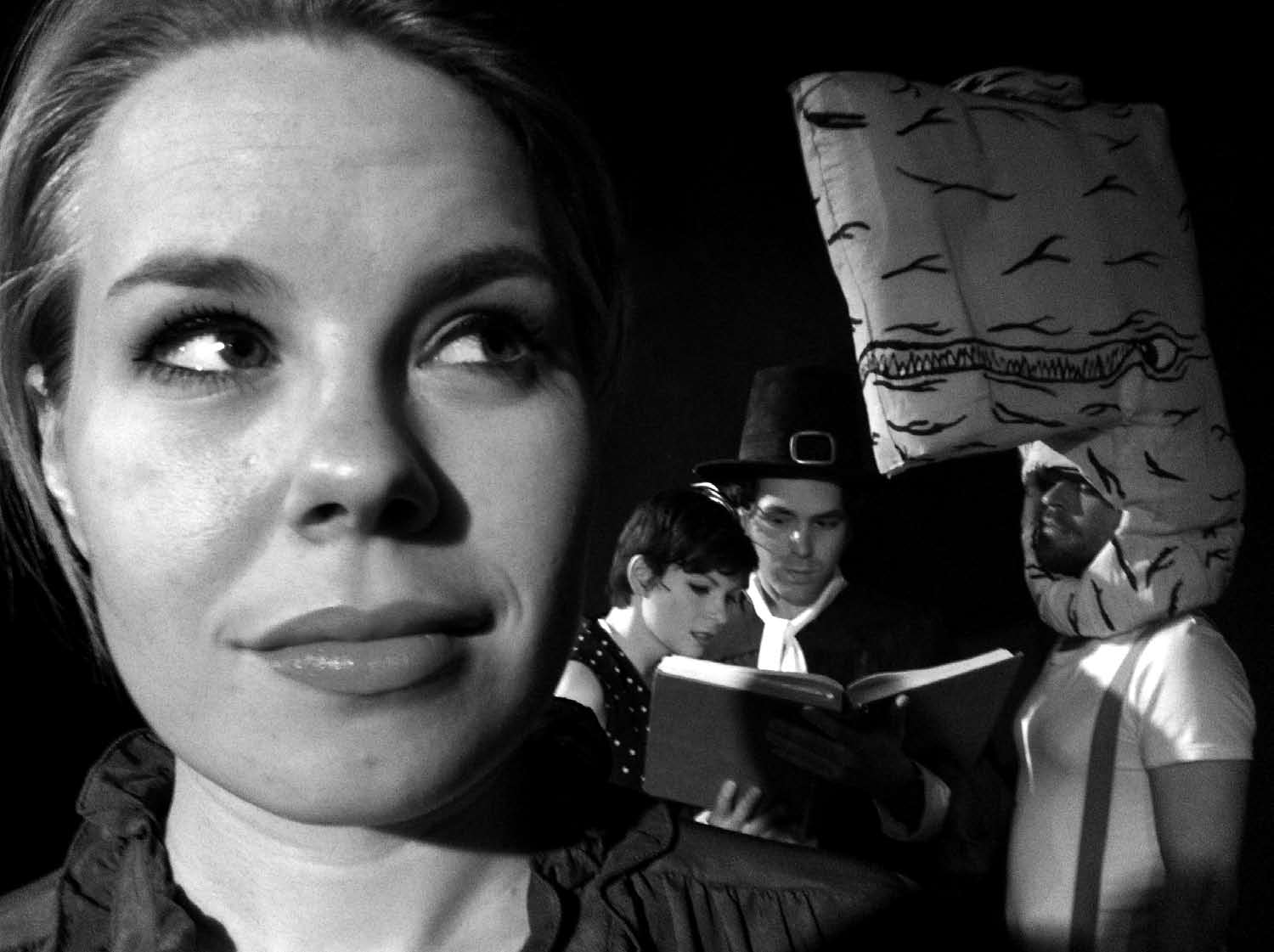 What do a pigeon fighting extinction, a panhandling sperm whale and Puritan
minister Cotton Mather have in common? They all have a lot of sex with each other
in the crazy surrealist world that is An Outopia for Pigeons. I sat down with author
Justin Maxwell and director Bonnie Gabel to talk about, among other things, poetics
in playwriting and plastic sexualities. 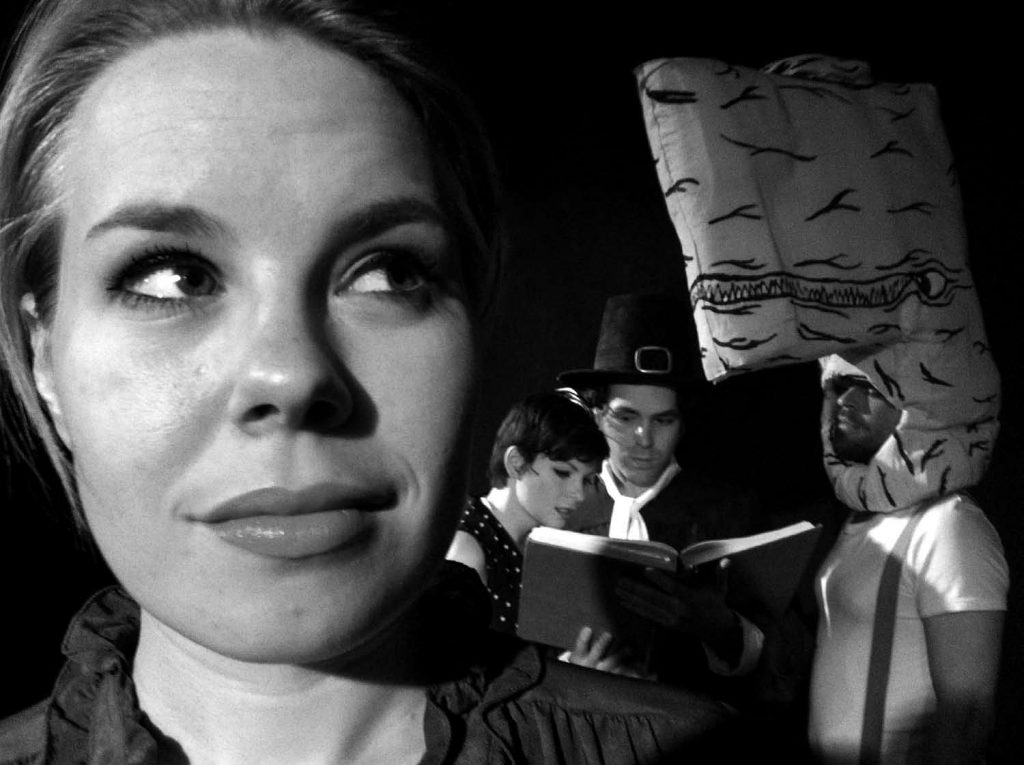 Justin Maxwell: The play is set in Outopia, which is a non-place. It is hard to nail down the definition of what this thing [Outopia] is. It is described as a 19th century curio cabinet of historical wonders, but ahistorical. It isn’t [in announcer’s voice], “Apartment. 19th century Manhattan.” It is this weird transcendental bizarre place. So now Bonnie gets to try to figure out what this place is.

Justin, is creating spaces like this  a specific interest of yours? Are you a weird and quirky guy? Or are you not and so this is a way of expressing that?

JM: I’m surprisingly not weird and quirky in real life. I think it all comes from being a wannabe philosophy major. My entry to theatre actually comes through [Eugène] Ionesco. I started out as a poet and I did a bit of fiction writing. I wasn’t terribly interested in theatre because I saw all these other artists getting involved in it and I could never suspend my disbelief. It was always a guy in a whale costume and I never lost that distance. And so then I encountered The Bald Soprano [by Ionesco] and thought, “Oh! I don’t have to lose that distance.” And then I realized all these other artists involved made the work better. And then all of my other writing turned into theatre. The poems became persona poems; the fiction became very dialogue-driven with stage direction-like narrative. I was never interested in work driven by plot and character. I am on the far side of post-modernism, so plot and character for me have come back in as tools to make a piece of art; but I definitely don’t make work that is driven by that.

BG: Which to me is so exciting as a director and to the performers to dive into work where there is a lot of agency, there are a lot of decisions to be made and space to interpret. I think  one of the things that I like about this work, which is something I like about  some of the other surreal plays, is it seems to me that the understanding is by juxtaposition. There are things  that shouldn’t be in a room together but when you put them together, you discover something meaningful about  them because they are next to each other. So, when you are dealing with that you have to figure out why, as performers and as a director, they got into a room together even though there might not be a logical explanation. We just had a big discussion about how Cotton Mather got to the Outopia and what he was doing right before he got there. And there is any number of possibilities that may not actually be important to the plot, but it becomes  important to the actor and gives this amazing color to his performance.

JM: I try to give a lot of room for actors  to go in and play. I had an epiphany a few years ago. I had a scene between a serial killer and his wife and it was a sex scene. I wrote some stage directions for it that were appropriately awkward and terrifying. And in the act of revision  they weren’t going to work well without the absolute perfect right actors. It’s that sort of fantasy all writers live in. And then I realized that if I just changed the stage directions to, “She does the raunchiest thing possible but still funny.” [laughter] We did it in New York and we did it in Minneapolis and it looked completely different with the two different casts, but it was much better than if the actors had just done whatever gross-o things I came up with.

Since you started out as a poet and a fiction writer, do you think that  informs your work now?

JM: I am definitely using poetic devices and some of them you can’t see. The dialogue is often written with line breaks, which Bonnie and the cast get to deal with. For me, it lets me shape  the flow and the rhythm and the pace of language and essentially gives me a larger grammar to work with. And also, poetry gets a lot from white space and it gets a lot from juxtaposition of image and language and a lot of that  comes in to build [tension]. Because I don’t have tension driven by characters, but I still have an audience that has its butts in seats for an hour. I still need to keep them engaged, and juxtaposition lets a lot of that happen. One of the fun things about theatre is audiences are willing to go there in a way they aren’t in other genres, because once you see Cotton Mather and a sperm  whale standing there together, you believe it because they are right there,  you can see them. When I do that in fiction, you really have to justify that  as an author, but seeing is believing even when you show people crazy stuff. There is a sperm whale in this play that has been hitchhiking across the country and has run out of money and is now panhandling—and they will buy it. Perfectly reasonable because we can see it.

BG: Yeah, and it becomes the actor’s job to sell that. They have suggested  animal costumes but how do you play a pigeon? [The actor] talks about not having thumbs. Well, she obviously has thumbs, but how do you play this character that has these inherent contradictions? It is very exciting.

Do you feel any of these poetic aspects as the director?

BG: I think any way that the author arranges things on a page, the actor deals with subconsciously. Even if they are not consciously dealing with it. I think that some of the sermons that  Cotton speaks are written in post-  modern fragments; and in those we have to figure out how to gel over those  line breaks, because you are trying to make something flow together that  doesn’t necessarily.

JM: On the surface it is a series of non sequiturs.

BG: But when you put them together back-to-back as if they are continual sentences, you find discoveries in them.

How did you come to decide  to work together on this?

JM: The play’s life in New Orleans came together when Southern Rep gave it a staged reading as part of their Pints  and Plays series. Richard [Mayer] from the Shadowbox came up to me after the reading and he loved it and asked to produce it. So he and I met and talked  about that and bounced around a list of directors. Bonnie was at the top of that  list and is generally awesome.

BG: I had heard good things about the script. I read it and loved it, I think  because of that understanding by juxtaposition. I am really excited to work at the Shadowbox, too. I’ve never  directed there and it is a super nice theatre. Richard has been amazing at driving and pushing things forward. He’s been an amazing producer. 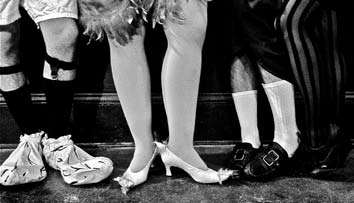 Is there something the audience should know coming in to the show?
JM: The universal consensus in Minneapolis was “Oh my God, I have to come back and see this again, because  there is a lot in it.”

BG: I think for an audience it is okay to not get everything in this place. It is important to walk into the play knowing that you could know who Foucault is, or you could not know who Foucault is. You could know about Cotton Mather and Martha Washington, or you could not; but to be willing to let things wash over you and to get what you can get from it is when you are going to have the most enjoyable experience.

JM: I think letting it wash over you is good. At one point I might have used the roller coaster metaphor: I don’t need to know the physics of how a rollercoaster works to really enjoy it. And frankly, if I am on the rollercoaster trying to figure out the trigonometry of it, I am not going to have very much fun.

BG: Also, there’s a lot of fun sex scenes in this play.

JM: That’s true. If you are easily offended by anything, it is probably in here somewhere.

BG: It is a really good play for Carnival.

Tell me more about all this sex!

JM: It’s very weird. And it’s very plastic  in some ways. I think sexuality and sexual attraction and sexual orientation in the text is very open and very plastic. I didn’t realize how much sex there was until I actually saw it on stage and was like, “Oh, right; we are at sex scene #4.” Four is a lot of sex scenes in a show that runs 75 minutes! Everybody is involved in at least two sex scenes, pre- or post-coital.

BG: It seems in the play everybody wants to have a lot of sex for a variety of reasons, and it doesn’t seem to matter much who they have it with. Or, it matters in the moment who they are having it with, but gender just is pretty plastic. We are also talking about sperm  whales and pigeons here.

JM: And a 300 year-old guy and someone who is sort of not a person.

BG: Right, who is sort of a figment of your imagination. By the nature of the characters, they have to have weird sexualities because they are not exactly the genders that they are.

JM: It is definitely not heteronormative.

BG: Right, it’s in a world where things  don’t function with their normal rules of sex and sexuality. Or any rules at all.

An Outopia for Pigeons runs February 6th through 23rd on Thursdays, Fridays and Saturdays at 8 pm and Sundays at 3 pm at the Shadowbox Theatre, 2400 St. Claude Avenue. For more info, check out shadowboxtheatre.com.