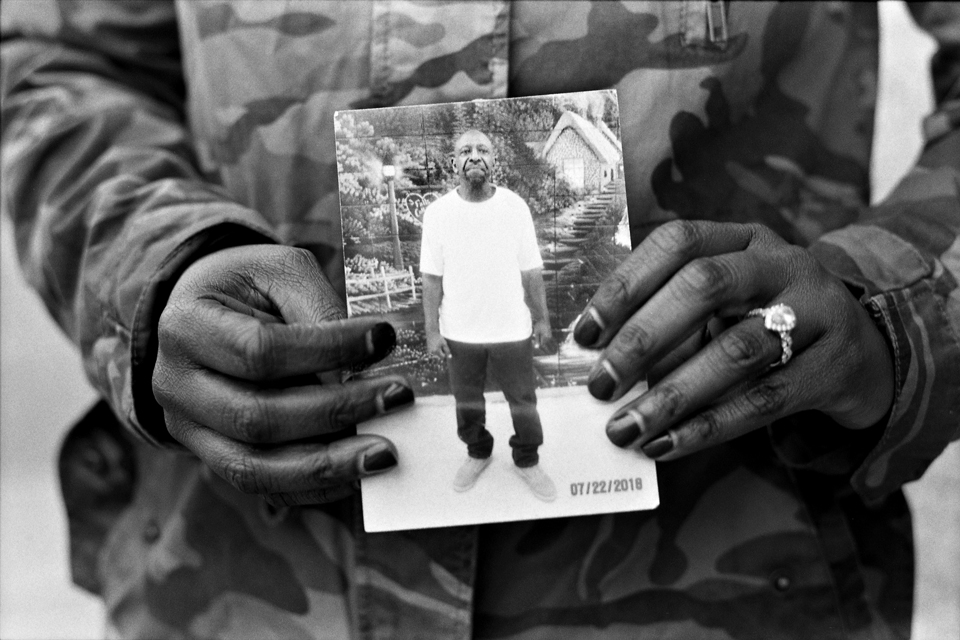 Daughters Beyond Incarceration (DBI) was founded by Dominque Jones and her incarcerated father, Charles Brown, Jr. (pictured above), in May of 2018. Charles was sentenced to life in 1982. To date, Dominque’s father has been behind bars her entire life. Robresha “Bree” Anderson, co-director of DBI, had a father in prison for the first 23 years of her life. Her father, Robert Jones, was sentenced to life without parole but exonerated in 2015 with the help of the Innocence Project.  With their collective experience, the organization is dedicated to maintaining emotional bonds between daughters and their imprisoned fathers.

Why is it so important to reconnect daughters with fathers who are incarcerated?
Dominque Jones: Growing up without a biological father is hard. Every child goes through phases at different points and the experience is different for us all. I used to imagine my father waiting for me after competing in my track meets. There were times that my imagination would take me so far, I’d have to remind myself that I couldn’t pick up the phone to call him. The fact that daughters grow up without knowing how to communicate our feelings to the one person that is meant to build our self-esteem puts us in a position to fail. For this reason alone, a stable father-daughter relationship is imperative. While a father is serving out his sentence, he needs to have the support of his loved ones, especially his daughter. The biggest issue that most fathers face is telling their daughters the truth.
Bree Anderson: Growing up in a household with a single mother was very difficult. My father went to prison while my mom was pregnant with me; and one of the challenges I silently faced my whole life was thinking one day I would get a call saying my father died in prison. Every time I got off the phone with my dad I think it traumatized me more because I always felt like it was going to be the last call I get from him. Daughters of fathers that are incarcerated face all their emotional challenges alone or seek the attention from other father-like figures. There was no mentor to support me while my father served his sentence, so most of the traumatic events that occurred in my life went unsaid, because I was too afraid to share my issues with family members. The more I aged, I grew closer with my father and he guided me through my teenage years through the phone and through letters. Every time I thought about making a decision that could have badly impacted me, I thought about what would my father say if he knew about it? So I made sure I didn’t take away his parental rights by doing something I know he wouldn’t approve of just because he’s not physically in my presence. It’s very important that daughters reconnect with their fathers because it makes a difference when she can open up to her father and not have to look for that love in other men. Many daughters who have incarcerated fathers are not aware that their fathers still have the ability to parent from behind bars.

Why does Daughters Beyond incarceration exist?
DJ: No one ever thinks about the child once the parent becomes incarcerated. No one ever thinks about the child once the father’s face is flashed across the TV. No one ever stops to think that this father still has a right to be a parent beyond bars. Every time there’s a conversation about prison, incarceration, or formerly incarcerated persons, there should be a representative of the children. Our juvenile justice center is filled with young boys who are children of prisoners and drug addicts. I know this because I grew up with them. If we tackle the parental incarceration issue upfront, we may possibly reduce the rate of incarceration. Children with incarcerated fathers need to see other children in their position overcoming the same barriers as they face. Otherwise, we feel defeated. While serving out his sentence, a father should still receive updates from school. A father should still be able to schedule parent-teacher conferences to be there for his daughter. More importantly, a father should receive a copy of his daughter’s report card. We exist to speak for those children who are often forgotten.
BA: Growing up in the project where I am from, it was normal for a child to forget about their father once they go to prison, because our minds was trained to know that no one can afford a lawyer and there was no belief that convictions could or would be overturned. I can remember many times my mother and father both told me for years he would one day come home, but people outside my home always convinced me that it would never happen. Those doubts made me support him even more, because after going to every court date and researching his case, it was obvious that my father was wrongfully convicted.

What are some barriers that children with incarcerated parents face?
DJ: For me, the biggest barrier I faced was neglect. The feeling as if he didn’t care. Because if he did, then he wouldn’t have committed a crime to take him away from me. Following that up with being constantly told by your father “I’m coming home soon” without an explanation of why can be gut-wrenching for a young girl. To have the one man that tells you how strong and how beautiful and how smart you are not be there for you physically. The father generally implants the foundation of self-love in his child. If the father is absent, you leave that up to the caregiver, who most likely is mentally drained from raising a child alone.
BA: Some of the barriers I faced growing up was trying to move forward in life knowing that my father’s parental rights was limited. Parental rights should not be taken away from a father because he is incarcerated. The father is the head and foundation of the household and when the father is absent the foundation is shaken, which causes the child to feel stranded in a mental and emotional development without having [the] initiative… to share their emotions with others who feel the same.

How did you overcome the obstacles that a child with an incarcerated parent may face?
DJ: Those of us that successfully survive the trauma we faced due to incarceration are backed by a strong village. From teachers to coaches or often times loved ones, we find the strength deep within, and soar based on the love that our village has for us. For me, it was my love for track and field and strict guardians. My mom and stepdad supported me in all of my endeavors. Please understand that incarceration affects us differently. It is a dynamic process that unfolds different developmental layers over time. Some of us fall deep into our family’s cycle while others break that cycle.
BA: In most cases young women never recover from those missed relationships. They never had a chance to build with their fathers and go on with their lives to have issues with trust, rejections, and an unfulfillment of life purposes. I overcame my obstacles of being directly impacted by incarceration because I had a strong mother who I watched struggle my entire life paying bills with only one source of income. My mother’s sacrifices caused me to take the initiative to begin working at the age of 14 to help provide for my younger siblings, so I dealt with my trauma by writing all my problems in journals for years and shared them once I felt like I was past the stages where I had trust issues, embarrassment, and felt neglected. The world will never be able to bridge the gap of father-daughter relationships if there’s no one to mentor or guide the daughter through life.

What traumas have you both had to endure?
DJ: I think the most traumatizing event for me was seeing my father for the first time outside of Angola. He was escorted by two deputies and he was shackled and chained. That scene is embedded into my brain forever. It was the first time I felt like the daughter of a killer. The next traumatizing event was finally researching his case and learning that there was no eye witnesses, no DNA, but only the testimony of an untrustworthy informant. That was traumatizing to find out that the state ripped my father away from me because he was an addict that robbed people to feed his addiction.
BA: For me, it was having to play the role of the parent when my father was released. After being incarcerated for 23 years, upon release, my father lacked the basic knowledge necessary to live and operate on his own. I had to let go of my needs as a daughter and allow myself to teach him how to operate as an adult in today’s society. It was truly difficult.

How do young women get into contact with the organization?
DJ: DBI will accept referrals from guardians, churches, organizations, foster care centers, schools, and community centers. Our users are Black fathers incarcerated in a Louisiana institution with daughters between the ages of eight and 18 that are currently residing in low income communities in New Orleans.

Once in contact, what is the process to begin to reunite daughters and fathers?
DJ: Our program works to assist fathers and daughters to enhance their parent-to-child relationship. We match mentees with mentors that are directly impacted by incarceration or has a strong interest in social justice. Once we receive permission from the caregiver to contact the father, we sit down with the mentee and have her write a letter telling her father about DBI and send him a brochure. Since each one of our girls develop differently throughout their father’s incarceration, we teach them differently. At some point  during their father’s sentence, a daughter will experience neglect, embarrassment, shame, and aggressive behavior. Each of these developmental phases can negatively impact them if not controlled early on. The actual visits will not happen until the daughter is ready to reconnect with their father and the father is ready to bridge that communication gap.

For more info on Daughters Beyond Incarceration, check out dbinola.org.

All photos by JASON KERZINSKI