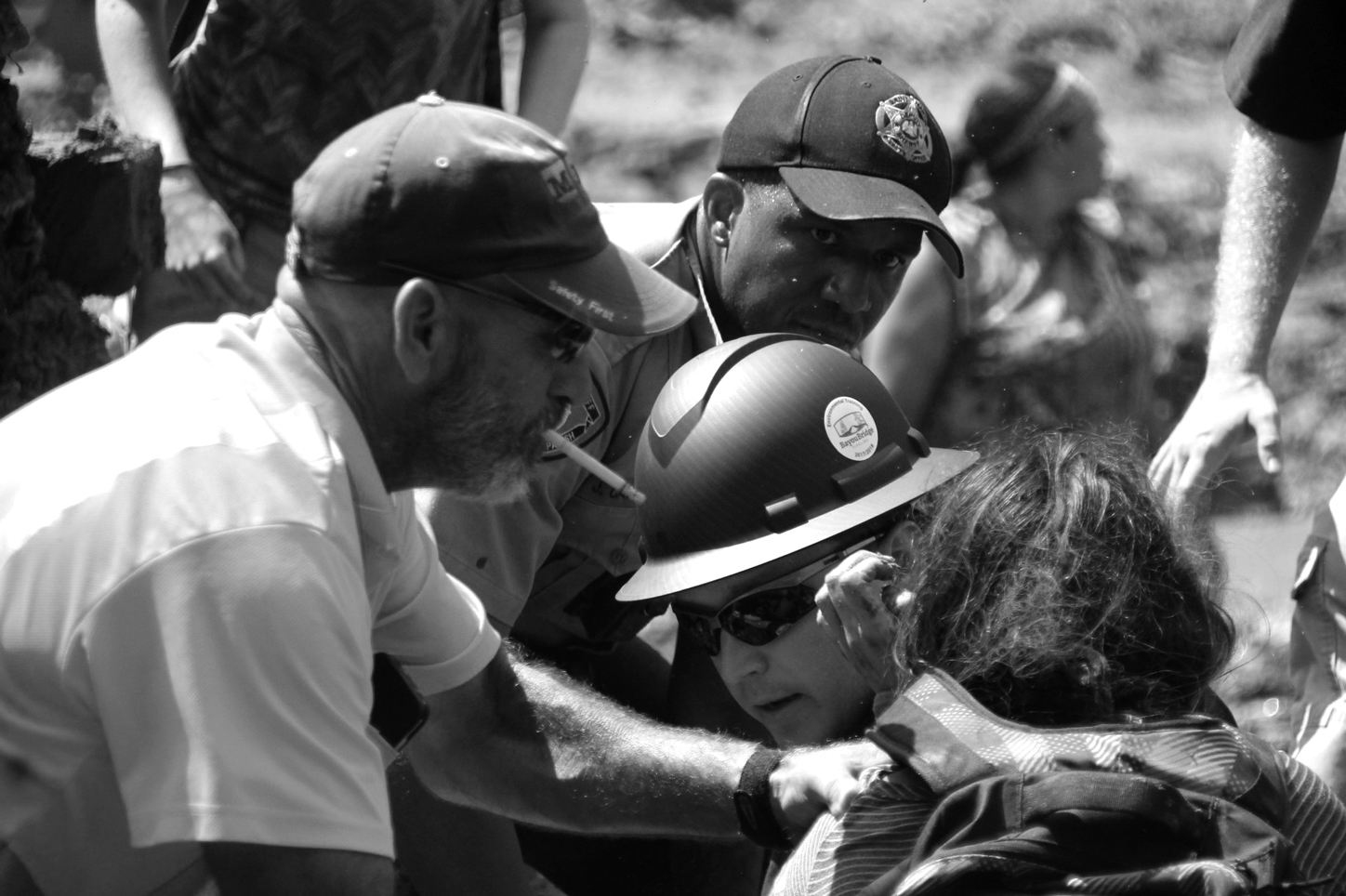 On October 15, a wave crashed over the bow of a boat, flooding and sinking it in the Atchafalaya Basin. It was one of two small jon boats carrying activists and filmmakers who had set out to monitor construction of the Bayou Bridge crude oil pipeline. Cherri Foytlin, a longtime leader of the L’eau Est La Vie anti-pipeline camp, was there with about 15 others. In a video posted to Facebook, she said, “I just remember the first wave going over the bow,” and after a few pulses of water, the boat was swamped.

Foytlin said that a large vessel carrying security personnel for the pipeline company had begun pursuing the activists near Bayou Chene, deep in the Basin, when suddenly it spun around, revved its two outboard motors and created the swells of water responsible for the sinking. “They didn’t even look back from their boat to make sure everything was OK, let alone swing back and just make sure,” Foytlin said. “They were trying to flood us.”

The camp has persisted in monitoring the pipeline and protesting the presence of its owner, Energy Transfer Partners, in the Atchafalaya Basin. Water protectors there are enraged at the company’s hostility towards indigenous communities in North Dakota, where the same company built the Dakota Access Pipeline. They also cite a private landowner’s lawsuit, which says the company is operating illegally on his private property in the Basin.

The L’eau Est La Vie water protectors have continued their fight, despite the boat incident and increased pressure from law enforcement. According to statements from the camp, in the past two months St. Martin Parish Sheriff’s officers have arrested a journalist, a Native American leader of the camp, and another water protector on warrants that claim surveillance footage documents their trespass on the pipeline easement.

One week before the sinking of the jon boat, an alarming UN climate report (“Global Warming of 1.5°C”) added another degree of urgency to the struggle. The report warned that the planet is on a much faster track towards major disruptions than previously predicted. The group of over 90 scientists from the Intergovernmental Panel on Climate Change (IPCC) who wrote the report warned that the planet will face a drastic increase in heat waves, forced migrations, wildfires, freshwater shortages, coastal flooding, and hurricane activity if carbon emissions aren’t cut by 40 to 50% in the next twelve years.

A lot has been said about how dire the report is, but Debra Roberts, a co-chair of the IPCC, brought a different kind of gravitas when she told the Agence France-Presse, “The next few years are probably the most important in human history.”

Activists fighting the oil pipeline in the Atchafalaya Basin have avoided the paralysis that often accompanies this kind of news and run directly towards the source of the issue. Rarely are the terms of the climate change fight as straightforward, immediate, or antagonistic as they are now in the Atchafalaya: there are those who are fighting against the forces that cause carbon extraction and there are those who are making their living expanding it.

The IPCC report calls for “rapid and far-reaching transitions in energy, land… and industrial systems” in order to to keep temperatures from rising above the dangerous threshold of 1.5 degrees Celsius. Its authors say that the necessary transitions would be unprecedented.

For its part, most of Louisiana’s governmental bodies are working to ensure the opposite. One report last year (“Maps of the Largest Industrial Projects Driving Growth in South Louisiana” by Greater Baton Rouge Business Report) showed that the Bayou Bridge pipeline is one of 99 new industrial projects planned for the state, which total more than $187 billion in new investments, primarily in fossil fuel-related industries. When Sen. John Kennedy (R-La.) was asked by Huffington Post reporters about the IPCC’s climate report, he said, “They must have parachuted in from another planet.”

In the lowlands of the Atchafalaya Basin, parish law enforcement is vigorously defending the Bayou Bridge project. One water protector, who asked to remain anonymous, said that after the boat was sunk in the Atchafalaya Basin and everyone made it to shore, the group had to hide in the woods to avoid being cited for trespassing. “Out there in the swamp,” the water protector said, “we’ve been on state land, or we’ve been in a navigable waterway, or we’ve been on private property where we’ve had written permission to be on that private property, and the police have still tackled people onto the cypress knees and injured us and arrested us and given us felonies… It’s just best to not be seen out there.” 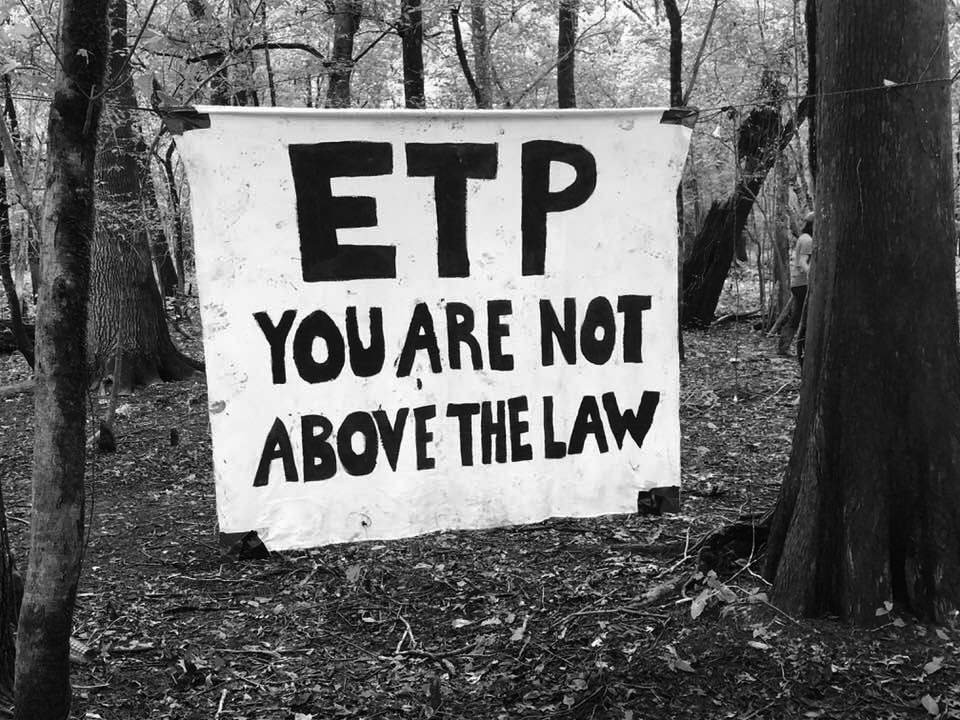 The lines between government law enforcement and the pipeline’s security forces have become blurred or in some cases erased. Water protectors have reported that St. Martin Parish Sheriff’s officers are working private security shifts for the pipeline company. In August, it was revealed that off-duty parole officers from the state Department of Corrections had been hired to work private security for the pipeline and used their authority to detain protesters, who were then charged with felonies. Those ramped-up charges are the result of recently-passed legislation which makes trespassing onto pipeline property punishable by up to five years in prison. One water protector remembers seeing sheriff’s officers carrying copies of the new legislation, HB727, printed on the letterhead of of the private security firm, Hub Enterprises, Inc. The St. Martin Parish Sheriff’s office did not respond to requests for comments for this story.

New Orleans-based attorney Bill Quigley, who represents those arrested, said in an email:

All arrests have been carried out by private security for the pipeline. All the private security have been public law enforcement who have been working in uniform, armed and being paid by the hour by the corporation. The district attorney has not made any decisions yet on whether the protestors will be prosecuted. All are out on bail amounts up to $10,000 each right now.

Meg Logue is an activist with the climate justice nonprofit 350 New Orleans. She called HB727  “a bill designed to suppress dissent against pipeline infrastructure,” which, she said, “unfortunately has been successful. [The penalties are] an absurd risk to take for peaceful actions.” She had appeared before the legislature to oppose the bill and recalled seeing lawyers for the industry “calling the shots,” while legislators “waited for the nod.”

Senator Fred Mills, whose district includes areas of St. Martin Parish where the pipeline crosses and where protesters have been arrested, was one of a small handful of representatives who opposed HB727. He cited a long and historic battle between crawfishers and the pipeline industry. To weaken the grip of the bill, he proposed amendments which he said were “fought by the pipeline companies,” whose lobbyists were advising the legislation.

This month, after a committee of state legislators met to discuss rusting bridges, flooded roads, and other transportation needs across the state, I spoke to several lawmakers about HB727, which created the new felony faced by protesters. Most said that it was passed to promote safety of protesters and workers. Plaquemines Parish Representative Chris Leopold said that he couldn’t comment on the use of the law by the St. Martin Parish justice system, but that he stood by the bill as it was passed. “We’ve already done our job,” he said.

It’s all a far cry from the emergency actions that climate scientists say are necessary to avert a climate crisis—solutions which include “strengthening the capacities for climate action of… indigenous peoples and local communities,” as opposed to arresting them. It certainly fuels the mission of the camp and Foytlin especially, who is Diné (Navajo) and Cherokee. She said that she is enraged that the state government is attacking environmental protesters on behalf of an industry that is sinking the state. “The system is NOT broken,” she wrote recently, “the system NEEDS to be broken.”

In a statement to ANTIGRAVITY, Alexis Daniel, a spokesperson for Energy Transfer Partners, denied that the company or its contractors had boats on the water at the time of the boat’s sinking and said, “I would like to stress that we do not wish harm on anyone regardless of their opinion on the project and would never do anything to put someone in harm’s way as they are alleging.”

One water protector present during the sinking said they had no doubts of the security boat’s affiliation with the pipeline company. “We know what company owns the boat. We know what company they bought the boat from. We know the name of the driver… There’s only one boat out at night, and we know it’s that boat.”

The pipeline’s targeted completion date was recently pushed back by two months, according to reports by The Advocate. “Environmental groups took the news to mean their tactics are working,” the story says. “The company says the timeline shift has more to do with weather.”

Top photo: As deputies look on, a worker grabs a water protector
photos by Karen Savage