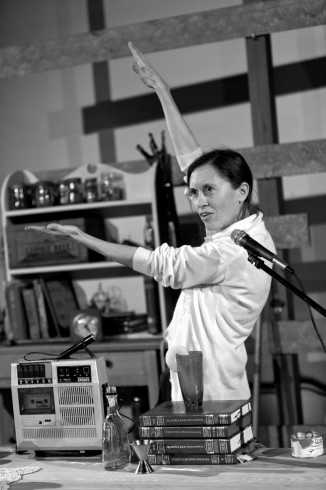 One sweaty evening in July members of the New Orleans theater community gather to perform, share feedback and eat watermelon together. Hosted by the ensemble theater company NEW NOISE, Sound Off! is an annual evening of works in progress that takes place at the height of summer. I sat down with NEW NOISE company members Phil Cramer and Joanna Russo to discuss the history of the event, the ethos of ensemble theater and what to expect at Sound Off! this year.

The mood at Sound Off! is always celebratory and a little bit silly. Cramer recalls one year when he came out and played on a toy piano to get the audience’s attention. Russo explains that there’s a palpable excitement at Sound Off! not only because of the vibrant new work being shared but because it’s a chance for folks to “come out of hibernation” during the long, slow months of summer when many leave town. “As artists we just get so bogged down in the logistics of the next project,” says Cramer, “Sound Off! is an opportunity to celebrate and get excited about what’s coming up in the next season.”

The format of the event is simple: three to four local theater artists or companies share 15 minute excerpts of new pieces they are developing. After each performance, a member of NEW NOISE facilitates a short dialogue with the audience using questions that were submitted in advance by the artists. “That’s something that we did inadvertently the first time but discovered over time that it actually created a more open environment for the audience,” Cramer explains. “I think artists really appreciated being a fly on the wall in their own feedback process.” At the end of the evening the crowd mingles, continuing the conversation. “We always have a watermelon there that we get off the side of the road,” Russo says. “Whoah!” Cramer interjects, before Russo continues, laughing, “I mean we buy it off a truck! We don’t just find it!”

The first Sound Off! took place in 2009 at the Convergence Center for the Arts in Lakeview when NEW NOISE needed feedback on a piece they were developing for the Fringe Festival. They only had 15 minutes of material to share so they invited friends and colleagues to present their own works in progress to round out the evening. It was an eclectic program, ranging from a physical theater meditation on cultural memory to a medieval style morality play. Since then Sound Off! has become a beloved tradition for theater artists and audiences. According to Cramer, “every time we do Sound Off! someone says: I can’t believe this only happens once a year.”

For audience members, Sound Off! is an opportunity to feel like they are a part of the work. “The play is only a play when it’s in front of an audience,” Cramer says, “it’s a two way street, it’s a dialogue.” Viewers become attached to the pieces as they develop and often follow them for many years. When NEW NOISE recently presented Runnin’ Down the Mountain, an original play with music, there were people in the crowd who had seen it develop over the course of multiple Sound Off! showings from a solo performance by Cramer into a fully realized play.  “Many people start to feel really invested in the process,” Russo explains. “[they] want to talk about the different stages of the work and what’s stayed and what’s changed and what’s surprised them.”

I think artists really appreciated being a fly on the wall in their own feedback process.”

For participating artists, Sound Off! is a low pressure opportunity to try something new and deepen the impact of their work by discovering what connects (and doesn’t connect) with audiences. When NEW NOISE first presented an excerpt from Runnin’ Down the Mountain at Sound Off! in 2011 it took the form of a solo performance. Cramer and Russo found that this format didn’t resonate in the ways they wanted with the audience and so the following year they presented a radically different piece on the same themes with multiple performers, original music and a striking scene involving an unspooled cassette tape. This moment captivated audiences and became a central image in a full length version that was eventually mounted at the Dryades Theater. In addition to creating opportunities for these sorts of discoveries, NEW NOISE also connects artists with resources such as rehearsal space to assist them in the development of their work

There is a spirit of generosity and openness at Sound Off! that is characteristic of the New Orleans theater community more broadly. “One thing that always strikes me when artists from out of town come to New Orleans,” Russo says, “is that they’re so taken by the sense of community and supportiveness among artists and companies.” Cramer and Russo note that works in progress showings have proliferated in the years since the first Sound Off! but they don’t take credit for this development. They see Sound Off! as part of a decades-long tradition of artists sharing their work with each other that stems from an ethos of ensemble theater that is especially strong in New Orleans. “There is a huge number of ensembles per capita in New Orleans” Cramer explains, citing groups such as Mondo Bizarro, ArtSpot, Goat in the Road and Junebug Productions that create original work as collectives rather than staging existing plays.

This process is time intensive and demands a dialogic exchange with the audience to get to the heart of the material. “When you do devised work you can’t just do a reading of it,” Russo explains, “You don’t write the script before the play is built so we often have a need to show a [more fully staged] version of the play…and then go back into the room and work with it again.” These groups function with limited financial resources and are not afraid to ask each other for support, whether it’s borrowing lighting instruments or showing up to share feedback and insight on each other’s works in progress.“There is this real grounded, real historical culture [of sharing] that is still active today,” Russo explains, “I think in a community that sees someone succeeding as good for the whole community…a works in progress showing has a better chance of taking root because we all want each other’s work to be as good as it can get.”

This ensemble ethos is a natural fit for New Orleans where cultural production, especially by African American artists, has a long history of being community-based, collaborative and participatory. Second lines and Mardi Gras Indians, for example, are traditions that involve pooling resources to make communal spaces in which the audience/participants are essential to the creation of meaning in the experience. Given the trend of newcomers to the city tapping into New Orleans’ “blues epistemologies,” as performance scholar Catherine Michna describes these practices, it is important to note that participatory creation has deep roots and is not a new innovation. Young white theater companies draw inspiration from this legacy but are by no means the only ones who carry it forward.

Those who attend Sound Off! V can expect a typically eclectic collection of work. Chen Gu is staging an excerpt from a screenplay in development and Narcisse|Movement Project is presenting a movement piece about family history. Russo will also be sharing a new seed of an idea, an immersive auditory experience that promises to tickle the senses. And of course, come hungry: there will be watermelon.

Sound Off! V will take place at the Shadowbox Theater at 8pm on July 2nd. There is a $5 suggested donation. More information is available at newnoise.org