It was St. Patrick’s Day, 2010. Alex Chilton was mowing the grass at his home on Esplanade Avenue when he felt shortness of breath. His wife, Laura, rushed home from work to race him to Tulane Medical Center. “Run the red light,” Alex rasped as they sped along the pothole-ridden pavement of New Orleans. No one expected Alex to be gone so soon—especially not of a heart attack. Everyone naturally worried about him when he had a chance encounter with Charles Manson while on tour with The Box Tops, or when he rode out Hurricane Katrina alone. But in his remaining days, Alex was at peace and content in his New Orleans Shangri-La. Envision him biking down Esplanade in the thick New Orleans heat, sitting at The Saint midday sipping a Diet Coke, thumbing through jukebox songs, or heading down Bourbon Street to play to drunken tourists. For the last two decades of his life, Alex Chilton called New Orleans home. To many who knew him well, these days were his happiest.

Before coming to New Orleans, Alex reached commercial success at 16 with the 1967 #1 worldwide hit by The Box Tops, “The Letter,” in which Alex sings gruffly, “Gimme a ticket on an aero-plane…” At an impressionable age, he was celebrated and just as quickly violated by the music business, all before receiving a driver’s license. The young band, while opening for The Doors and The Beach Boys, was seeing hardly any money, their manager pocketing it all. Not much changed when in 1970, he formed a power-pop rock band with songwriter Chris Bell. Big Star, named facetiously after a neighborhood grocery in Memphis, was formative for many bands we know today—dB’s, Yo La Tengo, Teenage Fanclub, to name just a few. Similar to William Eggleston’s photography (which adorned their record covers), Big Star illuminated the ordinary. Their music remains vivid and an unforgettable staple of power-pop rhythm guitar. In the early days, Big Star even played a small gig under the oaks of City Park. However, despite rave reviews, both #1 Record and their sophomore album, Radio City, suffered distribution troubles, leaving it lacking significant commercial success. Without any substantial tour, only a few live performances, and both Bell and bass player Andy Hummel dropping out, Big Star’s light appeared to be waning. Things only became darker when Bell died suddenly in a car crash on December 27, 1978. The funeral landed on Alex’s 28th birthday.

In the wake of Bell’s sudden death and a self-destructive trajectory, Alex needed a significant change. In 1982, he took the train from Memphis to the belly of New Orleans, crashing at a friend’s house on Dauphine Street, where he got his first taste of Mardi Gras (sans booze). It didn’t even take a year for Alex to uproot his life in Memphis and relocate to Tremé for a new start. It was in an Esplanade cottage home that friends called The Hideaway. Here, Alex found the refuge he had been seeking his entire life.

Alex began a series of menial jobs in the city that provided the foundation for a new beginning. He got a job sweeping up broken glass as a janitor at an Uptown bar, Tupelo’s. At Louis XVI, a former restaurant in the French Quarter, Alex scraped étouffée off plates as a dishwasher. He even worked as a tree cutter hacking branches away from River Road power lines. Music wasn’t on the forefront, but when Alex was offered a gig in a cover band called Scores, he enlisted bassist René Coman, foreshadowing a fortuitous friendship. With Alex on guitar, René on bass, and a local house drummer, Scores played regularly at a Bourbon Street joint called Papa Joe’s. Tipsy vacationers would request karaoke pop and R&B standards, but nearly no one recognized Alex from his Big Star days. “We put together a really cool setlist of obscure tunes that Alex liked,” René says, “We’d play ‘I’m Lookin’ For a Love’ [Bobby Womack] or ‘Walk Don’t Run’ [The Ventures].”

Despite his intentions, word got out that Alex was in New Orleans playing music. “The dB’s or R.E.M. would come through town, and you know Peter Buck would show up at Papa Joe’s and would be watching us play. Then they’d come to chat with Alex and me on the break,” René recalls. After they’d finish a set, René and Alex would head to Roundup, a seedy bar down the corner. The bar had a “Midnight Cowboy vibe,” as René describes, where the two would sit drinking soda (Alex newly sober), taking turns tossing coins into the worn-out jukebox. Notably, the Willie Nelson recording of “Always On My Mind” was a favorite of Alex’s, René tells me.

Being able to stumble into New Orleans clubs and see great artists, just “neighborhood guys,” René says, was one thing that appealed to Alex about the city. The streets were breeding grounds for inspiration. “One time we walked down Bourbon Street and Walter ‘Wolfman’ Washington was playing a gig at another Bourbon Street club. Walter does ‘Save Your Love For Me,’ and in Alex’s Tennessee twang, he said, ‘Woah, that’s cool.’” Alex swiftly added the song to their rolodex. “He was very much a scavenger and someone interested in and resuscitating this lost music and was even like an archivist,” René notes, adding, “Alex loved to find things that have been cast aside by normal society and breathe new life into them… [He] was a fan of detail and minutia, particularly minutiae that has a twist to it, something slightly kinky about it. He had a real sense of humor and appreciation for the obscure.” Anyone who’s delved into Alex’s solo works, such as Like Flies on Sherbert, can see this relation. The mixed album magnetized Americana roots while becoming a punk rock masterpiece. On A Man Called Destruction, he used a New Orleans jazz funeral as the motivation for “It’s Your Funeral.” Some of his solo albums superficially appear self-absorbed and commercially unappealing. But it is always interesting, catching, and stylistically Alex, even in the covers. He made The Beatles’ “I’m So Tired” more exasperated, and The Velvet Underground’s “Femme Fatale” darker.

In 1995, after receiving a hefty royalty check from The Bangles for their cover of Big Star’s “September Gurls,” Chilton purchased the home on Esplanade. It was a fixer-upper, but it was his sanctuary. In the early days, Chilton lived there with no television or phone, only a busted thrift store record player and a few LPs—many of which he and friends would sit around and play along to together. He made music on his own time, occasionally when asked. During this time, Alex engineered The Royal Pendletons’ Smokin’ EP. Art Boonparn, who also recorded it, says, “We probably broke a record for the most cigarettes smoked during the making of a 7”.” The Pendletons’ debut album—Oh Yeah, Baby—was also engineered by Alex, capturing the live grit of the surf-garage-raunch band. This appreciation for a looser, live-based recording reflected in most of Alex’s solo work and was one of his many talents.

Alex held a strong appreciation for his new home and neighborhood. Ray Davies of The Kinks stayed in Alex’s former New Orleans complex after getting shot in the leg during a robbery on Burgundy Street in 2004. Alex brought Davies a guitar to pick around on while he recovered. This neighborly spirit led to a recording of “Till the End of the Day’’ later down the line. When Hurricane Katrina hit in 2005, Alex stubbornly refused to evacuate his beloved home. He boarded up the rickety windows of his antique building, prepared to sit out the storm alone. Friends from Memphis to New York feared for his safety. However, after five days and running low on food, Chilton climbed up on his roof to flag down a helicopter. From there, he caught a van to the airport and headed off to Houston. But as soon as state officials allowed, Alex returned home. “Going through a natural disaster and picking up the pieces was a slow process to connect with your friends, so you cherished every chance you got,” Boonparn describes, “I moved too far away, but at least a lot of people come to visit [New York]. Alex knew a hotel—I think it was just above 14th street—where he could smoke in the room. Alex was one of the special guests for the Yo La Tengo run of Hanukkah shows at Maxwell’s in Hoboken.” During this time, Alex married his big love, Laura Kerstin.

In a letter Laura wrote for Alex’s South by Southwest tribute, she says, “he valued spontaneity. This would seem to contradict his insistence on analysis and accuracy, but somehow he managed to be both at the same time. Honestly, this remains a mystery to me and is probably why he has been described as a genius and a musician’s musician.” Known for impromptu and spontaneous performances, the rumors of Alex playing a gig with James Booker on the keyboard or a Valentine’s Day show with Snooks Eaglin at the Howlin’ Wolf are believable. “Alex would do a lot of those Ponderosa Stomp gigs. He would be in the backing band and not want his name to be put on the poster,” René shares with me.

For René, his last experience with Alex was on Frenchmen Street. René had just finished a gig, and down the road was Alex with a “Cheshire grin… I think I played at d.b.a. or something and was dragging my equipment down the street, and here’s Alex walking towards me, ‘How the fuck are ya?’” René met Laura and recalls that Alex had a sense of “contentment and satisfaction.” 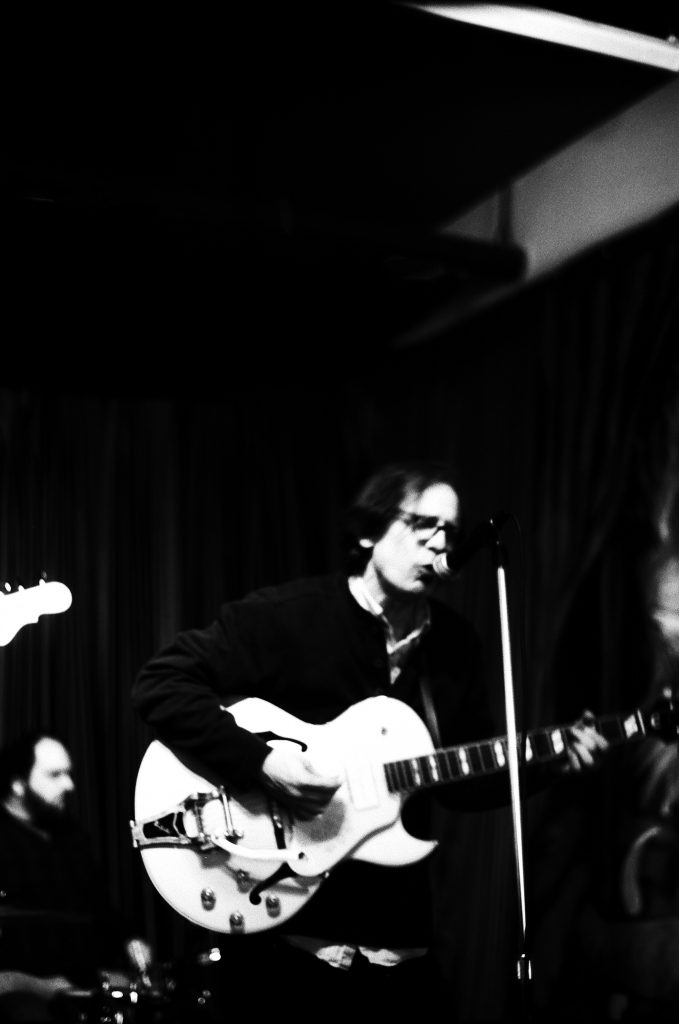 Alex Chilton at the Big Top, 2010 (photo by Eric Martinez)

In the April 2010 issue of ANTIGRAVITY, “King” Louie Bankston (who was the drummer on those Pendletons recordings) remembers Alex: “Along the way, cultures and movements and scenes would attach themselves to him. It was like every few years the world said, ‘Oh, we get it, finally!!! Hello Alex Chilton.’ That always seemed so powerful to me. That’s revolution! Alex and I had our ups and downs, but our last conversation ended the way they all seemed to end. With his sardonic smile and that soft sweet voice, ‘See ya later, Louie. Always a pleasure.’”

Beyond his monumental reach in the Box Tops and Big Star, Alex further associated with the likes of greats like Alan Vega (Suicide), and Tav Falco, not to mention producing The Cramps, The Gories, and the Royal Pendletons. Although his life in New Orleans isn’t as well-known, it was where he seemed most fulfilled. Alex’s final public appearance was on January 24, 2010, at the Big Top on Clio Street for a Doctors Without Borders benefit.

From soulful crooner to power-pop vanguard, skilled producer, and CBGB punkster, there is only one thing we can say about Alex for sure: he was his own man. We will always remember Alex Chilton and forever canonize his music—much to his irritation. 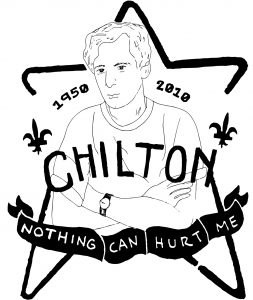