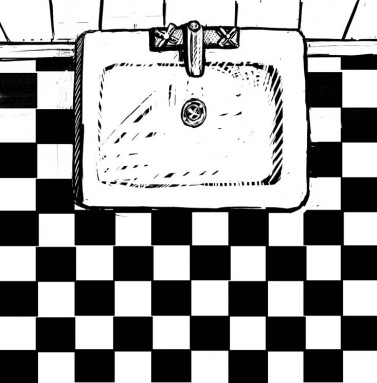 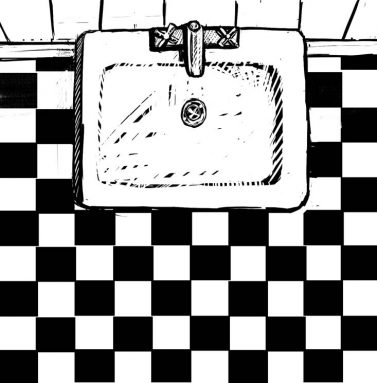 In the last installment, we found Harry in a cab driven by an Eastern European, waking from a strange visit to the Ganderthals and meeting their leader, Tobe Wannason, who had bio-engineered himself into a giant form of his former self. Tobe warned Harry of his boss being involved in suspicious activity. When he got back to his apartment, Harry learned of his live-in girlfriend, Norma, leaving him, just how much money the mystery wad left by the barfly suicide had given Harry, and a call from an anonymous “Rex Rey” about some out-of-country work…

Waking quickly, startled, I reach for Norma and she’s not there. I look around and reality quickly sinks in, reminding me of Norma’s parting. It’s really late but if I didn’t have to piss so bad, I would fall back and sleep a bit more to nurse my wounds. My neck still has a slight ping from the Ganderthals’ knock- out technique. They’d be the only ones to know what kind of messed up, scientifically-specific kung-fu was needed to out someone quick, fast and securely.

I look at the time and realize how long I’ve been asleep—hard, too. Shit… what day is it even? I shuffle to the toilet to piss and notice her stuff missing from the sink. This is going to be an adjustment. It’s been a long time since I’ve felt these feelings. It takes you all the way back to the first one. Maybe it’s a primordial genetic thing, being jilted. Cavemen probably felt it. We modern humans still carry .05 to 2% Cro-Magnon DNA in us.

But of all the insanity of the past couple days, I have to try and figure out just who in the world that guy at the bar was who handed me that wad of dough and then offed himself. Maybe I could head back down to the bar and ask Jeff if he may have found something out by now.

Fucking Ganderthals, what a wholly what the fuck was that about? Their lair was what a low budget James Bond student production would look like. But they are no make- believe organization, though. And now I’ve either been “made” or “made out to be” a spy. Either one is of no interest to me. Something big is about to go down and if I’m not careful I’m going to be wrapped up in the middle of all of it.

This potential out-of-the-country gig might be just the ticket to lying low and out of the way. I could take that gig in a foreign land, use the mystery money and hide out, bounce like a damn globetrotting college kid. Yeah, first I have to figure out how to get all that blood off of the money. I laugh to myself.

I grab a robe off the back of the door where there used to be two. Then to the door to get the newspaper. I pick it up, fold it under my arm, look downstairs and wave to my downstairs neighbor, Nisa. She’s watering her plants. Just as I’m about to say “Hey,” the phone rings.

I look at the incoming data display; it’s my boss. “Hey Bill, how ya been, old buddy?”

“Don’t give me that shit, Harry. Where the hell is that report and why the hell haven’t I been able to get in touch with you, huh, Harry?” “Well, Bill, I’m with the police right now,” I tell him with the obvious air of a complete lie, “And hold on, ‘yes officer, I’ll be right with you; this is someone who deeply cares for me.’ Hey Bill, I gotta go, so you’ll have your report when I’m capable of it, thanks.”

“Don’t give me any of that bullshit  and give me that report so—” I end the call. I don’t have time for that guy right now. I need a plan… and some coffee.

I head towards the kitchen and the phone rings again. I look at the incoming data display and see that it’s the same number from last night. I hesitate for a millisecond and answer the phone. From the moment I answer I wish I had never  picked it up. Right as the voice on the other end starts talking, everything sounds and feels like it’s in 2/3 of regular speed, like a dream.  As Rex Rey tells me he represents people representing Peruvian workers who are suing Bogrüson Energy, challenging the hiring of Chinese slaves over Peruvians. Nisa comes upstairs through the open door, finds a note pad and starts writing on it and hands me the pad:

I made extra breakfast do you want some?

Rex Continues, “We need a third party witness to the video depositions.”

I write yes on the notepad and smile.

“It’s all a complicated mess of checks and balances,” Rex continues.

She writes got bit by a spider? And points to my neck. I get a chill and shake my head slowly no as I take the note pad, not knowing how to respond.

“You will either need a form of translation or hire your own translator.” Without thinking, I write do you speak Spanish or Chinese? “If you want to know more, we can meet for lunch say today at 2 p.m.?”

Actually both, and Japanese, French and German. Why?

“I’m interested; when would I have to fly?” As I hear these words come out of my mouth, everything goes back to normal speed.

“Day after tomorrow,” says Rex, in a very official way. I think for a moment and write:

I’ll see you downstairs. She turns and leaves as I take the phone and newspaper towards the bathroom. This is too good to be true, and I should have never answered the phone. “Lunch today? Two p.m. it is. Where?”

As I pull my pants down and sit at the toilet, I hold the front page of the paper and see the headline:  RETIRED FORMER MILITARY RESEARCH SCIENTIST UNDER INVESTIGATION FOR ESPIONAGE FOUND DEAD OF APPARENT SUICIDE. The picture in the photo vaguely resembles the man, but it’s him. It’s the guy from the bar…

Parts One through Five are available online at antigravitymagazine.com/tag/e-willy-p