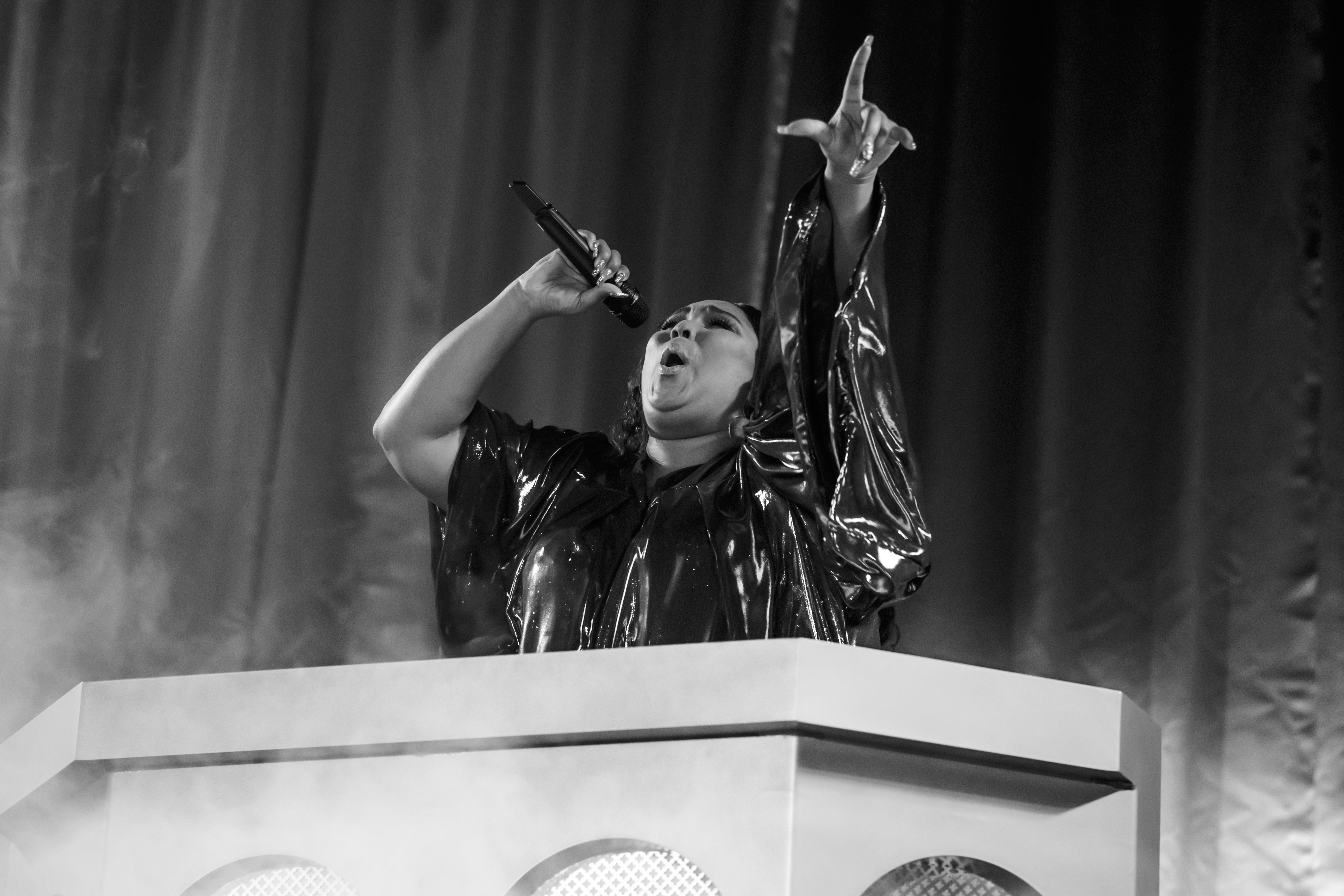 A few years ago, I did my best to convince my good friend, who is a choreographer for our Mardi Gras dance krewe, to use Lizzo’s song “Good As Hell” for one of our new dances that season. She had already chosen another song, but I kept beating the Lizzo drum incessantly anyway.

When I stumbled upon “Good As Hell,” it bored its way into my brain like a most joyful and welcome parasite. Over the next two years, I eagerly followed Lizzo as she released a series of fire singles. I spent a lot of time looking around, wondering when the rest of the world was going to get the memo on how badass she was. Thankfully, they finally did.

To say that Lizzo has had a monumental year is a laughable understatement. The girl is everywhere. Viral performances at the BET Awards and VMAs…appearances at SXSW and on every late night show in existence… a #1 single in “Truth Hurts”… I think it’s safe to say that 2019 is the Year of Lizzo.

I attended the second night of her two-night stand at The Fillmore in September and for someone who has been waiting years to experience Lizzo in person, it was well worth it. As expected, there was an abundance of bare flesh and a respectable amount of glitter on display. Some people went to costumey extremes, but it seemed like most folks just went into their closet and picked their bravest outfit.

There were quite a few plus size women rocking looks, which both thrilled and didn’t surprise me. If you can’t turn it out for the queen of self-love and body positivity, after all, when can you? I was encouraged by the confidence I saw in a lot of these women, but also touched by the girls who were clearly a bit uncomfortable and trying to find their footing. I resisted the very strong motherly urge I had to walk up to one girl in her belly-baring crop top and say, “take your hands off your stomach… you are beautiful and there is no need to hide it.”

When Lizzo finally emerged about half an hour late—much to the chagrin of all the old people in the crowd with Monday morning work demands or kids who wake up at 6 a.m.—the crowd exploded. She opened with a fiery rendition of the gospel-tinged “Heaven Help Me,” she and her dancers clad in choir-like robes.

From there, it was pedal to the floor and no letting up. Her dancers—affectionately known as “the Big Grrrls”—brought attitude for days. Their choreography was sharp, sexy, and polished. Don’t tell my bosses, but my current goal in life is to find a way to become one of Lizzo’s backup dancers. Those girls speak to me—all big hair and big thighs and unapologetic rhythm. Yes Lord! Dance is for EVERY body.

Lest you think they did all the work though, Lizzo herself didn’t hold back. She performs with a backing track (controlled by her flawless DJ and hype master Sophia Eris) and she strategically employed it, leaning on the crowd or the track to support the vocals so she could hit a quick 8-count with her dancers throughout the songs. 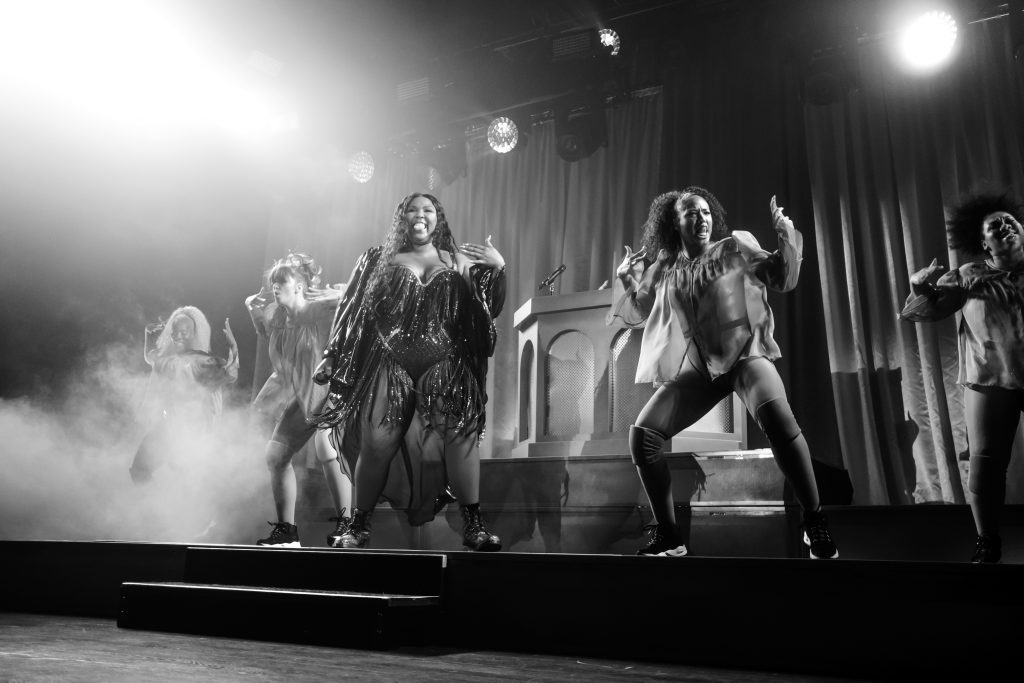 She also gave her dancers a break here and there to settle in for some vocal aerobics. First on the smooth, smoky “Jerome,” and later on the risque “Lingerie.” She admitted that these New Orleans shows were her first time performing the latter song live, and that she had spent the whole recording process for the track blushing, so it was both exhilarating and terrifying to perform such a vulnerable piece of work in front of a crowd.

The totality of the show was essentially a performance of her recent full-length, Cuz I Love You. She performed all but one track from that record (“Better in Color” was absent) and the only other tracks she folded in (“Good As Hell,” “Scuse Me,” and “Worship”) come from her 2016 Coconut Oil EP. The entire performance had consistent flow and timing, and her vocals were strong throughout. The attitude from everyone on stage was on point and the performance level reached a peak as high as any I’ve seen from her live show recordings. She has really hit her stride and it’s invigorating to watch.

A lot is made of Lizzo’s “image.” Her size. Her sex appeal. Her unapologetic attitude. She takes up space: As a woman. As a fat woman. As a fat Black woman. She’s admitted many times in interviews that she hasn’t always felt this way about herself. She, like many women, struggled mightily with body image issues and self-hate.

But let me tell you this: she stood on that stage and demanded worship from her audience each time before moving on to the next song. She refused to give us the option of not being in the trenches with her. It’s quite something to see any artist wield that power, but to see a woman whose physical appearance is of the type that has long been a target of mockery and derision, it was, frankly, life-affirming.

Seeing a fat woman love herself is great. It’s got to mean so much to young women; I know it would have resonated with me as a nervous, self-loathing 16-year old wearing size 18 jeans. Beyond that bold self-love, though, the kicker is that the world loves her too.

There is something deeply encouraging to me about the fact that not only is she an amazing performer brimming with self-confidence, but that people look at her and don’t see just “some fat woman who needs to cover up” (I mean, those people still exist and they will until the waters run dry, but they’re in the minority now).

I’m not sure if more rubenesque women in thong leotards twerking while playing the flute is the answer to the world’s ills, but I know the positivity, love, and energy she radiates sure isn’t hurting anything. So I say God bless her, and long may she reign.