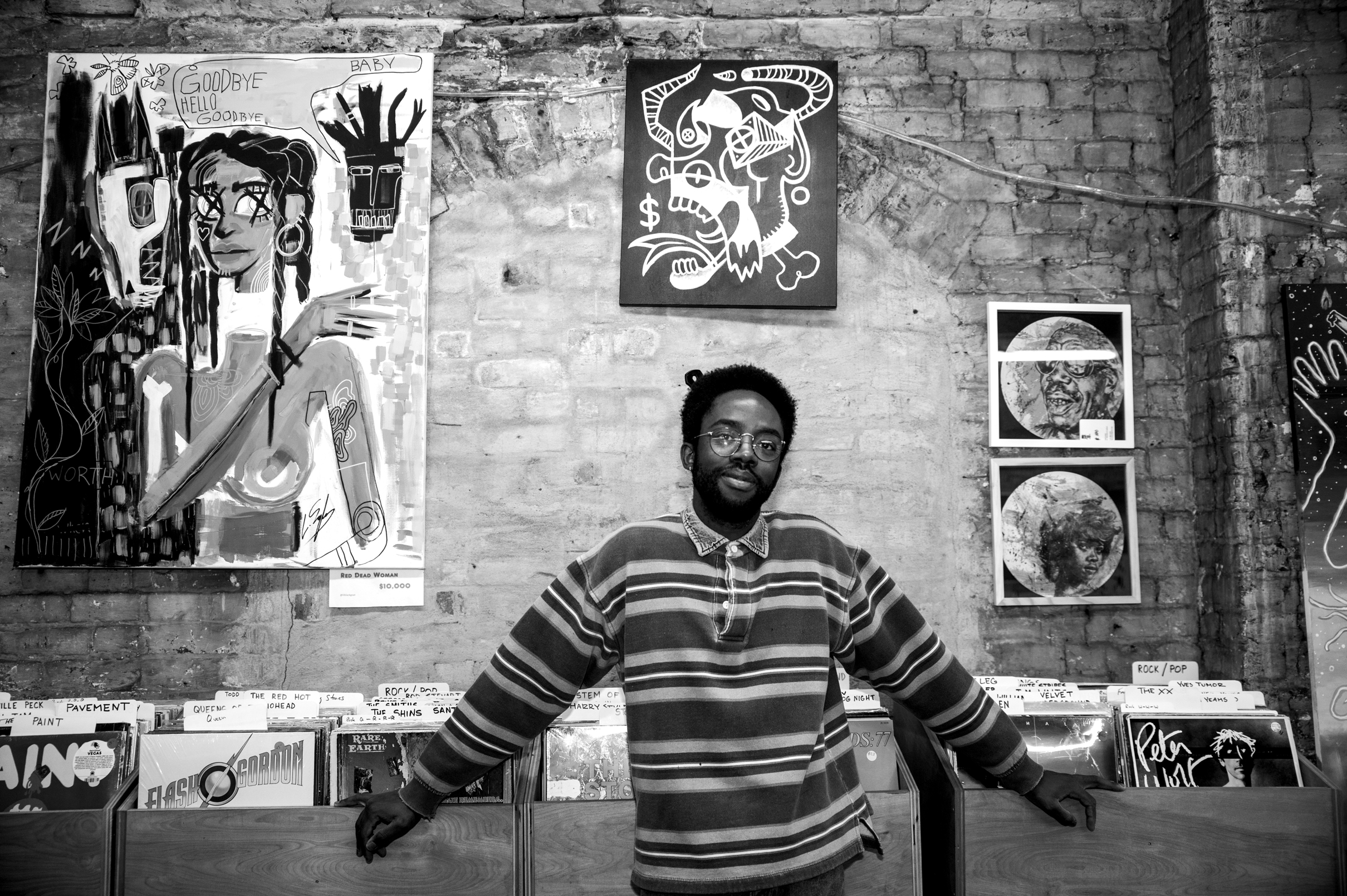 “He’s getting pretty.” Those are some of the first words I hear when walking into No Pulp Records. Staff member Kate is letting me know that the owner, Joe Lyle, is finishing getting ready for the interview. Aside from being heard for this interview, Joe wants to be seen. Joe and I have known each other since we were wide-eyed Black teenagers in Baton Rouge’s art and music communities. There’s something to be said about the Black experience, being seen and unseen at the same time—a certain gray area exists that has space for creative magic.

No Pulp Records is located in the French Quarter (since October 2018), one of the most seen areas of the city by tourists, and yet oftentimes overlooked by New Orleans residents. In a historic area like the French Quarter, Joe Lyle is a Black record shop owner, but there’s more to the story than what meets the eye. Wide-eyed once again, full of curiosity, I browse the shelves of No Pulp, talking to Kate, as Stereolab plays on vinyl in the background. A few records catch my eye; Mister Magic by Grover Washington Jr. in particular stands out. This is my spontaneous vinyl purchase. I hand the record over to Kate as we walk towards the checkout counter to put it on hold until after the interview.

With surreal timing, a door opens and Joe emerges, smiles, and says hey to me and apologizes for being late—which I accept—followed by us dapping. We briefly chat about meeting when we were teenagers and how the day’s interview feels timely and spiritual in a sense. Joe directs me into a room connected to the shop, where his drums are set up next to a record shelf and a few guitars. I take a seat on a couch in front of Joe sitting in a chair. Joe’s one of the best drummers around, in my opinion. He’s also my friend. I take a deep breath and get ready to enjoy this interview.

I’m great. Busy in a good way. There’s a lot of stuff going on in my life between work as a drummer and work here in the shop.

How long have you been drumming?

Since I was four. I went to college for it and I do like freelance touring work. I played with the band GIVERS, from Lafayette. I played with Solange for a little bit.

No big deal, this Solange situation. It’s got a more local feel. GIVERS, too.

Yeah. It’s all been local, but recently I’ve been in the Bay Area a lot with this guy, Jared Mattson. Also this artist Tanukichan, I’m touring with next year.

Jared Mattson, he’s in The Mattson 2.

Yeah, he’s in The Mattson 2, and he’s worked with Toro y Moi a lot, off their last album, he co-wrote that “Millennium” music single. Mattson’s just starting a solo project, his music is coming out next year. We’ll be touring when that comes out. We did a lot of touring ahead of Toro’s album, too.

After traveling from tours and you come back to No Pulp Records, do tour experiences influence the ethos of the record shop?

I meet all kinds of musicians on the road and it definitely influences who I bring into No Pulp Records, because I start bringing in friends of mine, like Michael Rault, who plays in this band PAINT, who is also associated with Allah-Las.

Those are some big bands you named.

Yeah, exactly. Being on the road, I meet big musicians. Like Vicky Farewell, we did a tour with her in August. She knows Anderson .Paak and has been working with him since he was Breezy Lovejoy. She has two Grammys from producing and writing on .Paak’s last record. So yeah, meeting a lot of people, listening to music and putting it in the shop. Which also helps bring in music artists when they’re visiting the city. Like, Thundercat, I met out and about, that was one way to get him in No Pulp Records to sign stuff and meet people.

How does bringing in a musician like Thundercat change the normal interactions the shop has with customers?

The record shop becomes more of a cultural aspect, which is something I’ve wanted from the beginning, to have a place where people can have experiences, build community, and grow in different ways.

How would you describe the shop’s vinyl selection?

I’m trying to cover everything. No matter who walks in, I want them to be able to find something that they like. There’s not a single genre that I don’t like or listen to. So a lot of it boils down to just stuff I like. Of course, I try to hire people who have interests outside of mine, or maybe expand on my own. Johnny works here, he goes by C’est Funk. He’s a local DJ and he’s really knowledgeable on international music. Kate knows a lot of hardcore music or alternative rock. Chucky knows a lot of hip-hop, like an encyclopedia. Ultimately, I want to be a large one-stop kind of record store.

How do you think the diversity of both the music and the staff ties into the shop’s social media presence?

I don’t like social media. I do it as a means of survival. I don’t put a lot of thought into it. Kate honestly enjoys putting more thought into that stuff, which is cool, and I definitely support her doing that. I’m just like, here’s the record we have. This is the name of it. We’re open. Sometimes, there’s something I really feel like talking about.

In your opinion, what’s the cultural significance of a Black-owned record shop in the French Quarter?

I’ve seen firsthand the power of showing someone who looks like them doing something incredible. I’ve heard from multiple people the impact seeing my store has had on them. And I think that’s the most significant thing about it.

Could you name five of your favorite albums of 2022?

DOMi & JD Beck’s record is great. I feel like they’ve bridged so many gaps with their music. Joviale’s Hurricane Belle is extremely inspiring. My friend Chase Ceglie put out a new album called Chaseland, it’s great. Devin Morrison put out a lot of Dream Lobby tapes he wrote. I call it black vaporware. Naked Flames‘s Miracle in Transit.

What inspired No Pulp to do signed vinyl giveaways from touring music artists?

Connecting musicians in the city with artists who are touring has always been a goal of mine for this shop, so I’m glad I can finally get the in-store signings off the ground. Also selling signed records of course helps us get through the hard months, financially.

What does No Pulp Records have planned for 2023?

Just expanding on what I built this year. More events. More vinyl signings. I want to do more with the community. Maybe a bike drive or something like that. Being in the Quarter really cuts us off from the rest of the city and I want to make sure we’re not just a tourism destination. I owe a lot to the city. 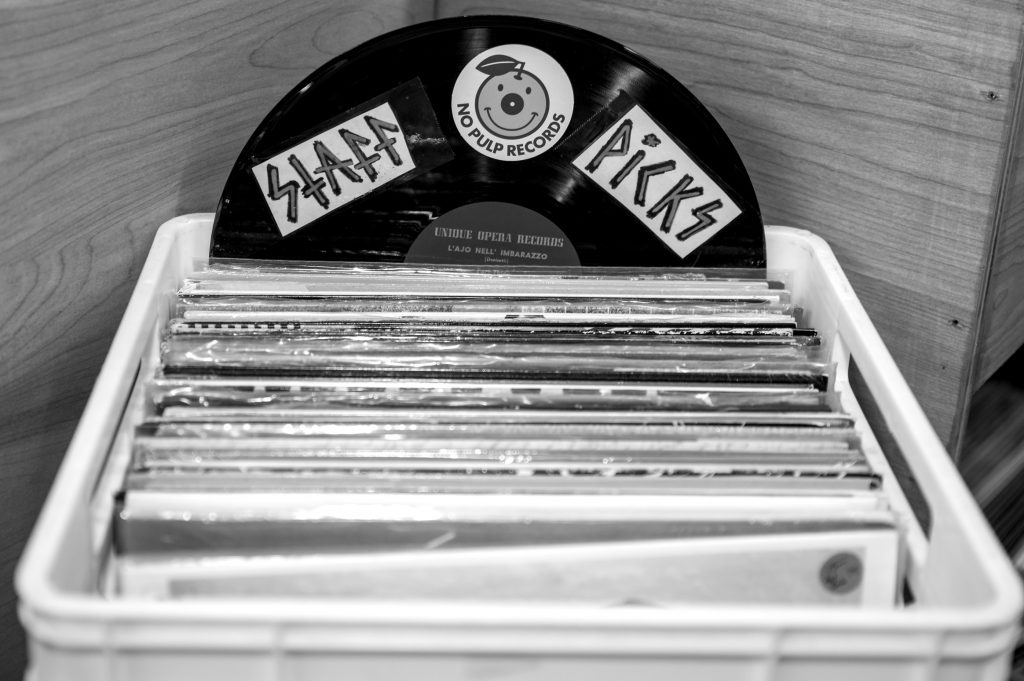 For more info, check out nopulprecords.com.