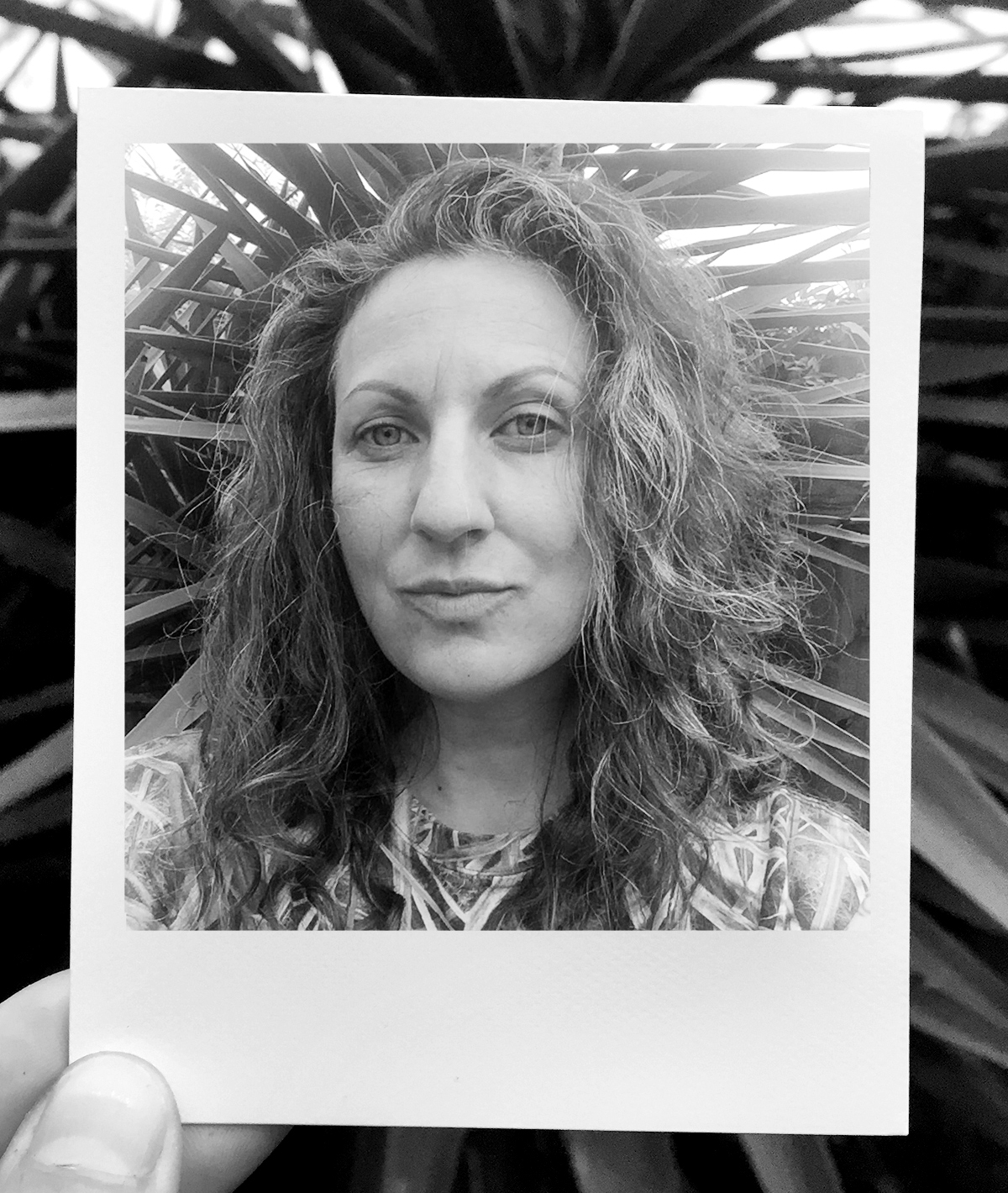 Recently I asked Aubrey Edwards to come hang out with me in my backyard to talk about her process. She and I both have black pit bull mixes, and our dogs played in the sunshine while we sat across from one another at a big table discussing the work of making art. Aubrey has a multimedia practice that is centered on photography. She makes images that are about people, nature, stories, and history, and her work contains a throughline of lush beauty that links the images to the locations where they were made. Up until last year she was a member of the photography collective Southerly Gold with fellow artists Ariya Martin and Elena Ricci. Their impressive output includes the interactive installation Land of Evangeline: Reconstructed at NOMA in 2019, and the book set God’s Country. More recently she has been revisiting themes of land and injustice in mixed media works such as the textile series Tracing an Atrocity. But before all that, she spent years as an editorial and commercial photographer, and she talked to me about the tension between artistic creation and commodification.

I think of you as a photographer, but you also do a lot of mixed media stuff. How would you describe what you do?

I was a freelance photographer for a really, really long time, but I never considered it an artistic practice. It was a job, it was my profession, to the point where if I were to travel, I would never bring a camera because photography was something I commodified.

Because you didn’t want to be working while you traveled?

Yeah. It always felt like work. But it was also kind of this dream of like, “Oh, I’m doing what I love for money. So this is great!” But I hustled all the fucking time. And then, maybe seven years ago, I decided to no longer depend on freelancing as a main mode of income. Once I made that decision, I was able to open up photography more as an artistic practice and less as a career. And that then enabled me to start experimenting with it more. So instead of freelance work, where it’s like, here’s your job, flip it, deadline’s here, get the next job, flip it, here’s the deadline, I got to move into longer term projects… It’s funny. I never called myself an artist up until maybe a year or two ago. I’ve taught art for forever, and I’d tell my students, “You’re all artists.” But for me, it was always, “You’re a photographer.” So it’s been really interesting to expand that idea of what I think about myself, and what I create and to open that box up a little bit.

Is it more fun taking pictures as an artist as opposed to a freelancer, without that expectation of payment attached to it?

It is! And before, I always photographed for an audience. If I was photographing for a magazine, for a newspaper, for an ad campaign, there was always an audience. Even when I did long-term community-rooted projects—I did those for about seven years or so, where I was working alongside communities using visuals to tell the story of place and rituals. I was bound to the people I was photographing; I was bound with this kind of transparency of what I was creating, making sure they had a say in things. It was also limited in that regard, because I wanted [the people I was working with] to have ownership over what I was creating with them. Versus now where I’ve moved out of community-based, people-based work, especially during the pandemic, and I’ve been forced to look at what I’m doing in a really different way. 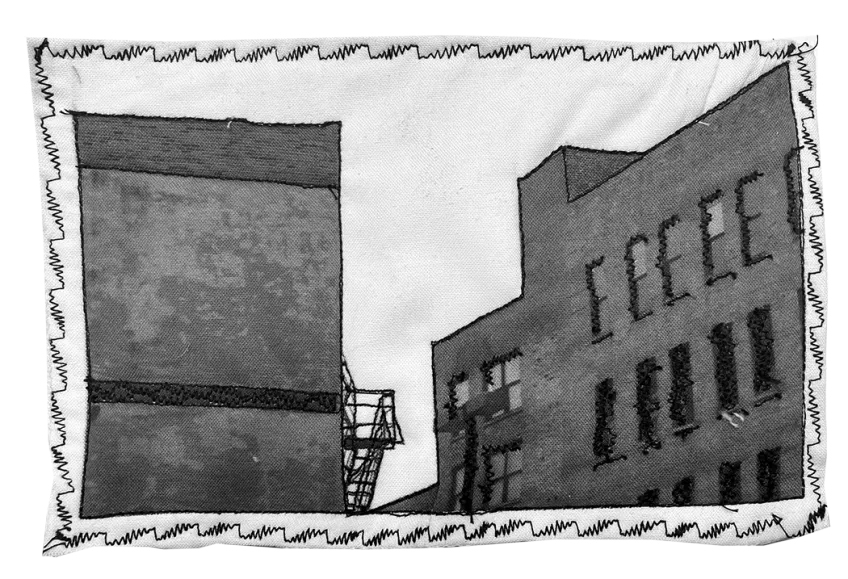 Looking at what you have been doing lately, the Tracing an Atrocity project for example, there is a tactile element in your work that seems new.

Yeah, totally. You know, I grew up shooting film, so things were always tactile, they were always tangible. And there was a ritual to that process of developing film or holding photos. Then during my freelance time, that was gone. Everything was digital—I would shoot 2,000 photos and then sit in front of a computer screen… I’ve been really driven, over this past year, to get grounded and back in my body, and really use my hands to move forward in new ways with visuals. I’ve always sewn, so [it made sense to] bring my machines back out and be like, “What’s going to happen if we print images onto fabric? And how does that process in itself become a way to meditate on certain places?” Because these are all landscape images. I’m going to places that have borne witness to really horrible things. I’m interested in the stories that land can tell, and what land has borne witness to over time. This particular project is putting those images onto something tactile, and then sitting with them with my hands, with my machines, and just being in a meditative, contemplative place of “What did this land see?” 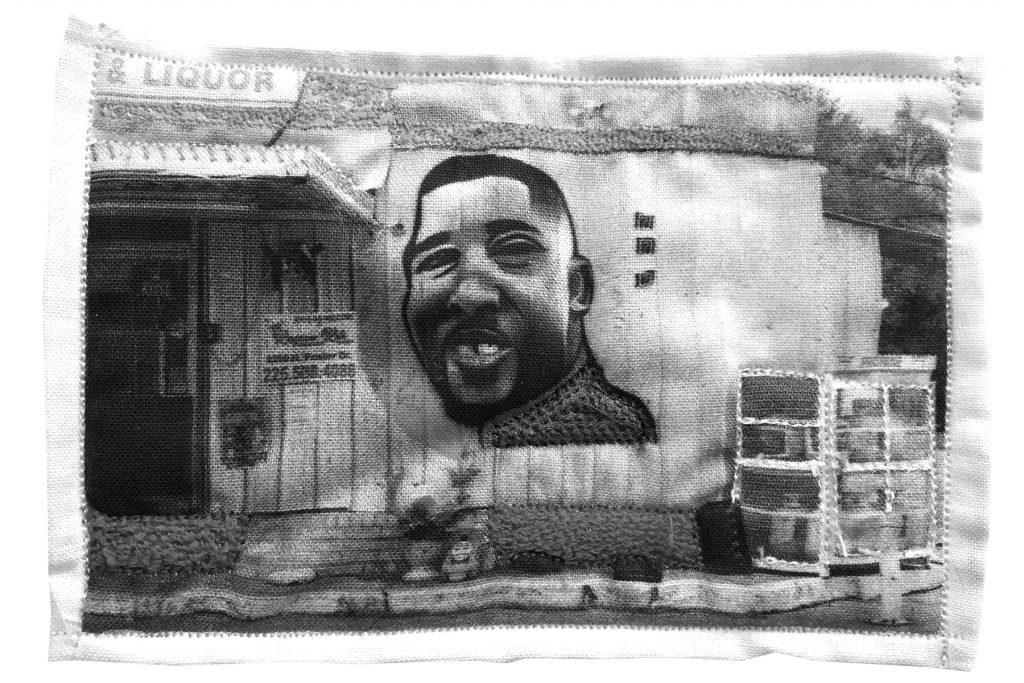 One of the reasons I wanted to talk to you is because you were part of an art-making collective, Southerly Gold. But it sounds like the work you’re doing recently is fairly isolated.

So, for ten years, I worked with two other women, photographing with them throughout Louisiana. My personal practice at the time was visual anthropology, community-rooted work and portrait work, photographing people. And I always did landscape work with [Southerly Gold]. That process was really interesting, because the three of us would shoot together in a place. If we shot digital, we would just dump the images, no one knew who photographed what—it just became collective ownership. Or if we photographed on any sort of film camera, we would set it up and everyone would kind of sign off on the composition before we took the photo. So these photos became collective ownership.

Oh, that’s neat! That’s a really different way of working that removes a little bit of ego, maybe, through that process.

Yeah! We showed work for lots of years. And people would be like, “So which one of you took this?” And we were like, “Oh, we all did,” which was this really interesting thing for people to process. But once again, when the pandemic hit, that collective reached our ten year anniversary, one of our members left town, and it just felt time that that chapter needed to close. It was a stopping point. And then after working with two people in a collaboration for ten years, I was like, “Holy shit, it’s just me now.” Especially since I haven’t been photographing people, working with people.

How have you been dealing with working alone this year?

Well, it’s been interesting, because I’ve never had a studio practice. All my portraits have always been on location. So throughout freelancing, all my collaborative work, whether it was community-rooted projects or with Southerly Gold, everything was always on location. I’ve never been in a space because my work didn’t necessitate a studio. With this shift to sewing, working with tintypes, doing more writing, doing more sketching, I actually need a space. I need to create a space in my house for this because I’m not creating in the world anymore. Oh, and now I need to figure out how to be disciplined because I’ve never been a studio artist.

How? Like, what do you do? How do you keep yourself disciplined?

[More laughs] Yeah. Well, you know, having that separation between the studio and everything else. My computer does not come in here. If I need to research, I can go in the other room. But when I’m sitting at this table, sewing or sketching, or reading or putting down ideas, even if it’s just a small little space, this is what I’m going to be doing here. If I were doing commission work, if there was pressure, it would be very different than where I’m at now, where I’m simply trying to explore the idea of having a studio practice. I’ve never done it. And there’s some freedom to that, because there’s no stakes.

I don’t think that everybody approaches their studio practice like that. A lot of people think that there are very big stakes.

You know, I was talking to an artist friend, and I was like, “Man, I can’t wait to never be famous.” [Laughs] That’s not why I make shit. That’s just not my path. I’m never going to commodify again, because I’m just trying to make work. I have ADD, [so] this is for my mental and emotional health. Something I’m always going to be doing is making things with my hands. And, even the work that I’m making now, [my partner] is like, “What are you gonna do with it?” I’m like, “What do you mean?” It’s enough to just put it on my website, because that’s where I just organize things, but I’m not looking to show. I can’t even imagine a gallery show right now.

You work with film, and these other processes we discussed earlier. Do you still shoot digital?

Of course. I mean, it’s a quick turnaround, man. I’ve taught photography for years. I love showing my students a sepia tone portrait of a dead old white man looking his best in like, 1910. And then saying, “You see this? Let me tell you what went into this image. He had to save up money. He had to wait until the photographer came into town. He had to get a ride to town. He had to pay for this portrait. He had to wait months to get this one image of himself back, and most people can never even afford this luxury.” Versus now, my kids will pop off 100 photos themselves. So I still shoot digital. But I return back to that process of shooting film. It’s expensive. But it is process-based work, and I miss it.

What is the value of that process?

I kind of wish art school had more of that.

Yeah, it was one of the few schools like that in the country. So when I was out of school, I was able to run a business because I had the skills to do it. I’m not a capitalist, but it was ingrained in me the cost of creativity in photography. So it’s like, “Oh, you want to go take a four by five picture? Cool. You better get it right. Because this is how much money it costs to do the Polaroid. This is how much money it costs for the film. This is how much money it costs to develop it. So don’t fuck around.” When I’m shooting film, I had better make sure everything looks exactly how I want it to look before I click that shutter release button, which is a really different process than shooting digital where you can just shoot a whole bunch of shit. So it is a more disciplined process, and you really have to take your time. You’re more observant, you’re looking at every single thing that you see in your viewfinder, because it’s an expensive resource. So that in itself, that practice of that discipline is not something that I have when I shoot digital images.

It is an interesting trade-off.

You know, I’ve been taking photos for so long. And I can’t tell you how many times I’ve just been like, “I’m done. I don’t want to do this anymore.” But no, you’re going to have a lifelong relationship with this. You take a step back and figure out what this relationship needs to look like, and you try something new. Because it’s always going to be here. 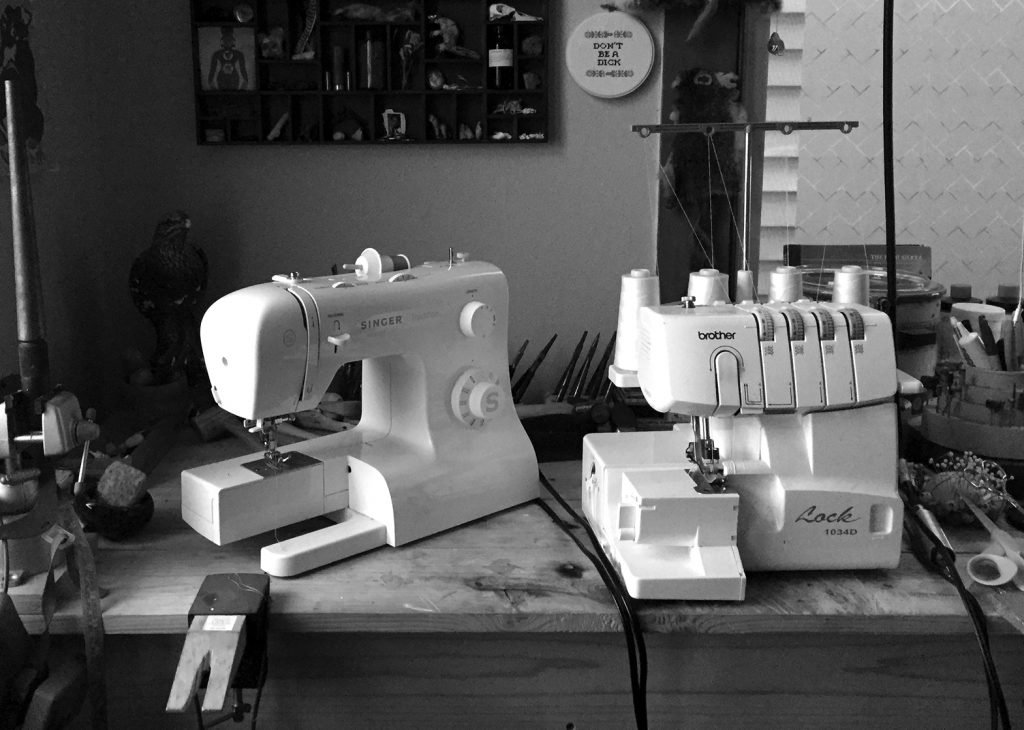 For more on Aubrey Edwards’ work, including Tracing An Atrocity, go to aubreyedwards.com. Photos courtesy of the artist.