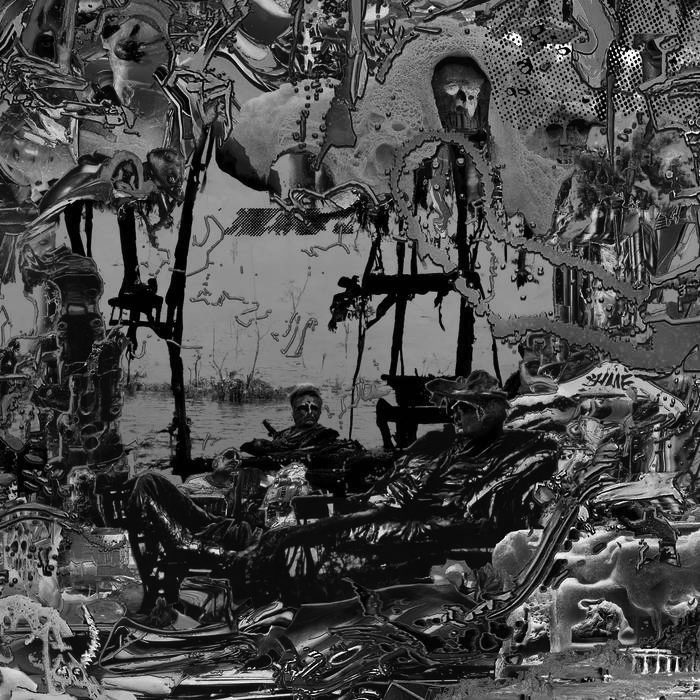 Five years and three albums into their existence, black midi has become one of the most exciting bands to emerge from the U.K., graduating from relative obscurity to publicly slagging off Ed Sheeran in Pitchfork. Their music, which exists in the liminal space between irreverent and self-serious, is best described as arty prog rock meets experimental jazz meets post-punk meets musical theater. Even for those who do not care for or find their music challenging, there is no denying the talent displayed by this band. Hellfire, their third full-length album, is also arguably their most theatrical work. The influence of Weimar-era cabaret is threaded throughout (“27 Questions” is the best example), and the songs themselves are roughly built around a series of vignettes featuring sketchy characters and cover topics such as war, sex work (“The Defence”), future realities (“Sugar/Tzu”), and Satanism. The album also finds the band taking their already impressive technical proficiency and energy to new heights. Guitars, drums, and piano exist alongside horns and woodwinds, clips of sports and news announcements are incorporated seamlessly, different genres are woven in and out, and time signatures might change mid-song. Hellfire is stunning in its chaos, catnip for us music geeks, and undeniably thought-provoking even for those who may not find the music to be their cup of tea. —Mary Beth Campbell 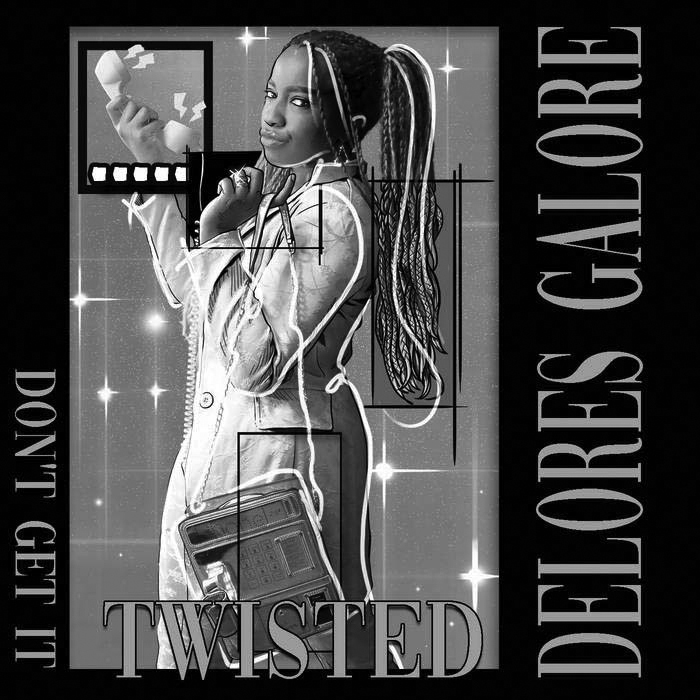 Don’t Get It Twisted is a synthy, multi-purpose record. On the opening track “Side Part,” Gabrielle Washington sings “You take me home and you put me to sleep” over a disco beat—appropriate for an EP that could soundtrack both a Saturday evening home alone trying to get right with yourself, or the 3 a.m. delirium at the tail end of leaving the bullshit on the dance floor. While “Continue?” is more suited to a night in, with its slow, R&B sound, “Lova Girl” is the song that plays when you don’t feel you can stand another second. “Cemetery Valley” captures the EP’s duality best with a sultry beat that’s edgier than the rest, with soft, twinkling synths sprinkled throughout. Don’t Get It Twisted isn’t groundbreaking, but it is grounding—a necessary asset when very little is. In whatever setting you choose to utilize this record, you’ll walk away closer to yourself than when you started. —Marisa Clogher 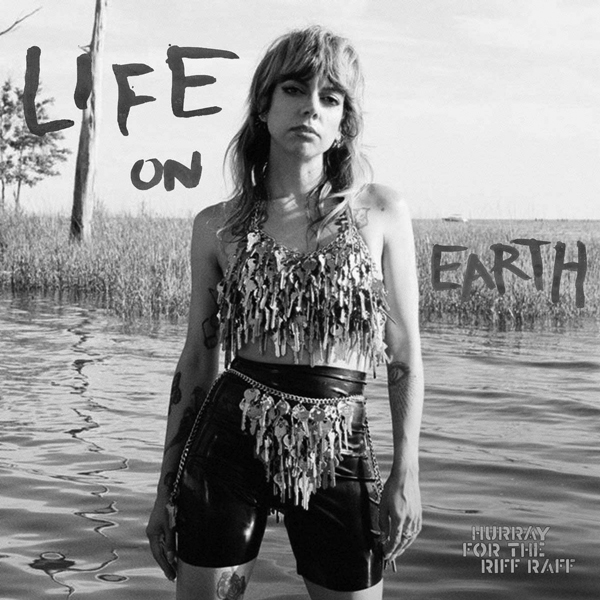 HURRAY FOR THE RIFF RAFF
LIFE ON EARTH
(NONESUCH)

Alynda Segarra’s eighth recorded outing, LIFE ON EARTH, is achingly beautiful. In the past, Segarra’s voice has shouted injustices from the rooftops. Here, they whisper directly into your ear: This is why life is so painful; this is why life is worth living. They aren’t preaching to their listeners, but speaking to the part of us that already feels the same way, dedicating the album to our struggle and our strength, as well as theirs. “BLESS ALL BEINGS RUNNING FOR THEIR LIVES,” they inscribe in the album’s insert, “LIFE ON EARTH IS LONG.” Taking on a surprisingly pop-tinged tone, laden with synths, energetic percussion, and pretty, breathy vocals, LIFE ON EARTH is filled with hooks and potential singles. Without compromising their message, Segarra is ready for the world to sing along. Songs like “WOLVES,” “PIERCED ARROWS,” and “RHODODENDRON” could easily slip into a workout mix, and I dare you to give “SAGA” a spin without looping the lyrics, “I—I don’t want this to be the saga of my life!” for the rest of the day. Lest you forget this is the artist who gutted us with the power of 2017’s “Pa’lante,” this album includes the enhanced spoken word track “PRECIOUS CARGO,” a gentle sounding, fury-driven, open-eyed admonishment of the U.S. immigration system. Segarra is a fighter. They have power to share and they’re rooting for you to break free, to speak up, to find your voice—they’ve certainly found theirs. —Sabrina Stone 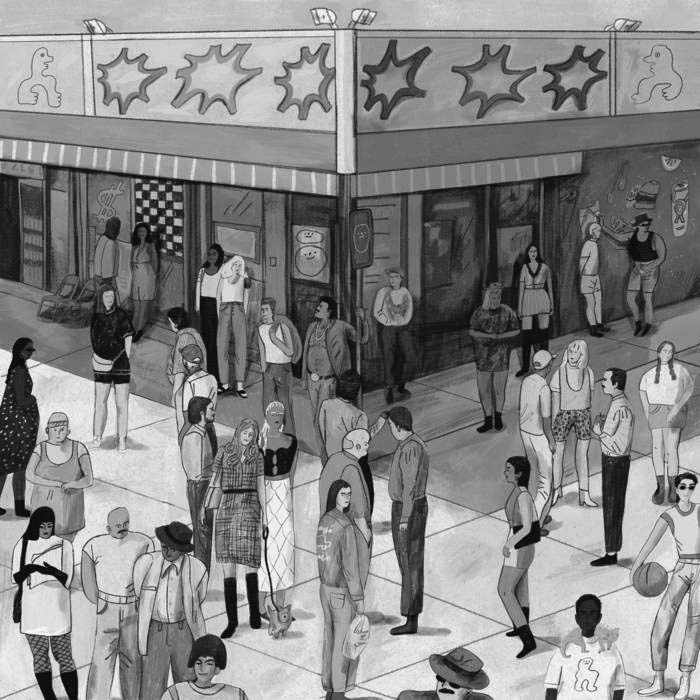 Bigger Sprout, the latest EP from New Orleans-based Lawn (Rui DeMagalhaes and Mac Folger), draws you in with the first jaunty note of opener “Down” through final track “Familiar.” Grounded in indie and psych rock, their songs are hook-driven and catchy, enticing the listener into a musical exploration of inner turmoil and self-awareness. The band’s decision to include the songs off their 2016 debut BIG SPROUT adds an additional layer of meaning; this EP showcases the band’s emotional and musical growth over the past six years. As explained by DeMagalhaes on the band’s Bandcamp page, “the driving force behind these songs was embracing change and new surroundings as a positive part of adulthood.” The aforementioned, surface-level cheery “Down” has been described by Folger as “a song about romanticizing your place and time, and struggling to move on from these things.” On “Running My Luck,” they lament, “I’m always tired of waking up / I’m always tired of feeling stuff / I’m always tired of acting tough / I’m always tired of running my luck.” Other notable tracks are “Night Life,” with its aggressive psych vibes, and “Medicine Forever,” which has an upbeat vibe not unlike that of Parquet Courts. Bigger Sprout accomplishes the difficult dual task of being a fun and arty psych album as well as a meaningful outlet to reflect upon our internal and external challenges and the complexities of change. —Mary Beth Campbell 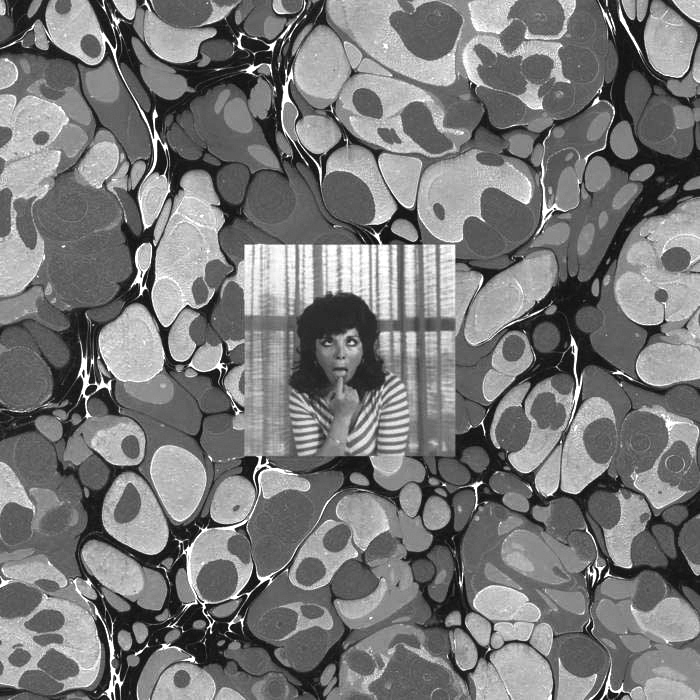 Xicanx New Orleans band MALFLORA (Crow, Shaggy, and Special Interest guitarist Maria Elena) distinguish themselves from many other bands in the scene. Their latest release, MAMA I’M BAD, was recorded by Ruth Mascelli (Special Interest) in collaboration with Alphabet Sound Observatory (ASO) in New Orleans, an audio engineer library established for Black and Indigenous women and LGBTQIA+ artists. Throughout the album’s eight songs, MALFLORA meld punk, krautrock, psych elements, and soundtrack overdubs (in particular, Federico Fellini’s films) creating a radical and trippy ecosystem. Their music, on this album and in general, is heady and immersive. The blending and blurring of styles and self-described anarchic, post-colonial lyrics push the listener outside their comfort zone, to “Imagine the possibilities / Redefine the barriers” (“Emergent”). On “Triangle Shirtwaist,” Maria Elena’s powerful vocals seethe over deliciously discordant guitars, creating a sense of urgency and rage as befits the inspiration behind the song title. “16th & Mission” is reminiscent of early Sonic Youth, while “Kick the Can” is a prime example of the band’s intersecting genres. Other notable tracks include “Mande” (sung entirely in Spanish) and the uplifting cacophony of “Alright (C’mon girls).” —Mary Beth Campbell 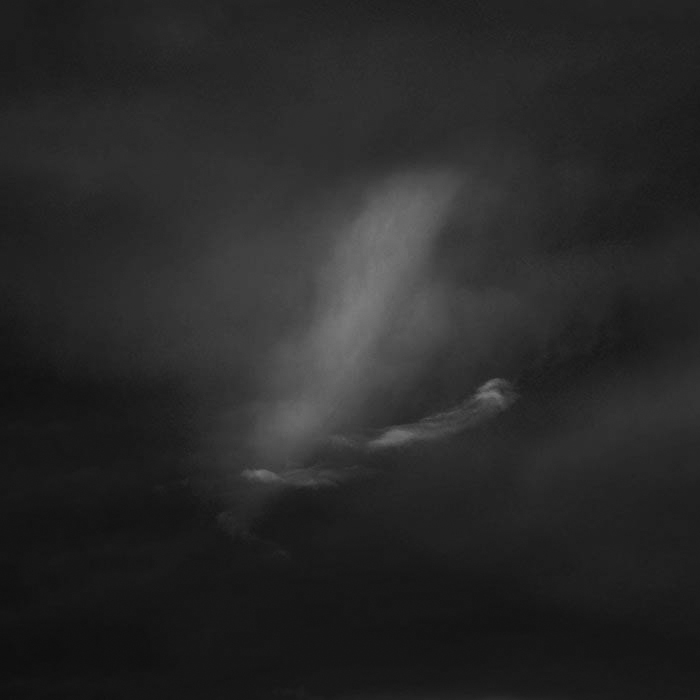 The Tallahassee four-piece Pool Kids blend coming-of-age angst with mathy-emo guitars to produce an intricate and deeply personal release. Following a four-year gap since their debut record Music To Practice Safe Sex To, Pool Kids have gained traction touring the record in national DIY circuits, drawing the attention of industry giants like Hayley Williams of Paramore. Pool Kids lived up to the name, as the basement studio flooded when they were adding the finishing touches to their album. The water destroyed much of their equipment while they were asleep upstairs, but I can’t help imagining them bashing out the last bit of “Pathetic” as water rushes in around them. They saturate each song with pedals, effects, key changes, and unusual time signatures without ever seeming too overbearing or stiff, like shoegaze or other math rock bands. Christine Goodwyne’s lyrics vividly describe declining friendships and romantic relationships while weaving in her struggles with mental health and trauma. The opening track, “Conscious Uncoupling,” captures the band’s dynamic soundscapes ranging from whirling synths to blood-pumping guitars. Softer tracks like “Further” form lush textures ranging from completely submerged to soaring, complimenting Goodwyne. Even when fully enraged on “I Hope You’re Right,” Goodwyne’s vocals gleam and glitter while her lyrics rip apart her subject like a feeding frenzy made up of rhinestone sharks. Pool Kids have fully realized their sound, leading a wave of Florida emo out of the swamps. —Dalton Spangler 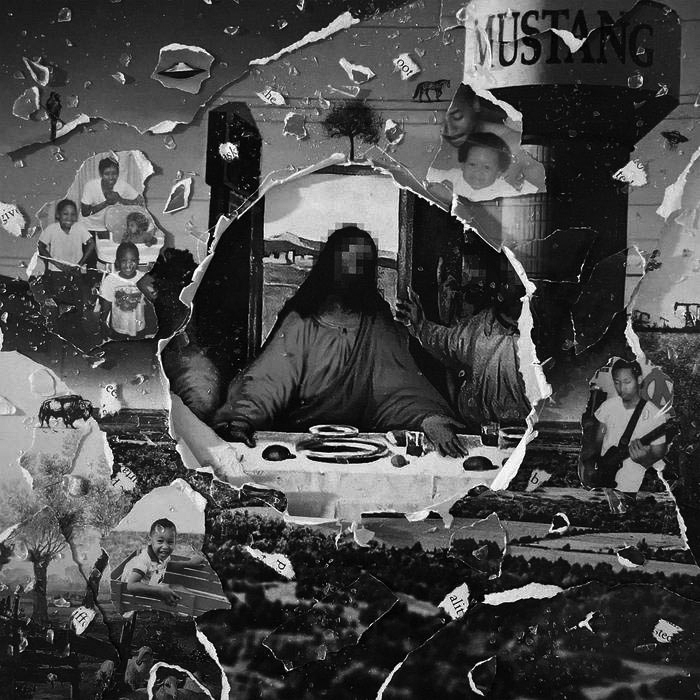 Producer and songwriter Bartees Strange deftly switches between emo, pop, and rap, daring anyone to place any particular label on him or his music. Farm To Table, his second album and first on famed label 4AD, finds Strange embracing the multi-facets of his sound with even greater exuberance and embrace of big emotions. Opening track “Heavy Heart,” with its jubilant horns and guitar riffs, finds Strange musing about how to find optimism amidst the sometimes suffocating weight of our reality. “Wretched,” with its shimmering pop and exploding synths, is a tribute to those who have stood by his side. Strange also does not shy away from both subtle and overt political commentary. The gorgeous, subdued yet urgent power ballad “Hold The Line” is more direct in its message as a tribute to Gianna Floyd (George Floyd’s daughter): “What happened is, I see it’s more than a lie / And I’ve seen this for my whole life.” “Cosigns” is simultaneously a sly, Auto-Tuned indie rock flex track aimed at the predominantly white indie rock realm (best line: “I’m a thief when things get big, look, I’ma steal your fans”) and Strange’s rumination on his own ambitions (“Hungry as ever, it’s never enough”). This is an album that contains multitudes and does so without getting bogged down. Unafraid to express emotion or truth and proudly comfortable in its intersecting musical genres, Farm To Table inspires much needed self-reflection, honesty, and joy. —Mary Beth Campbell 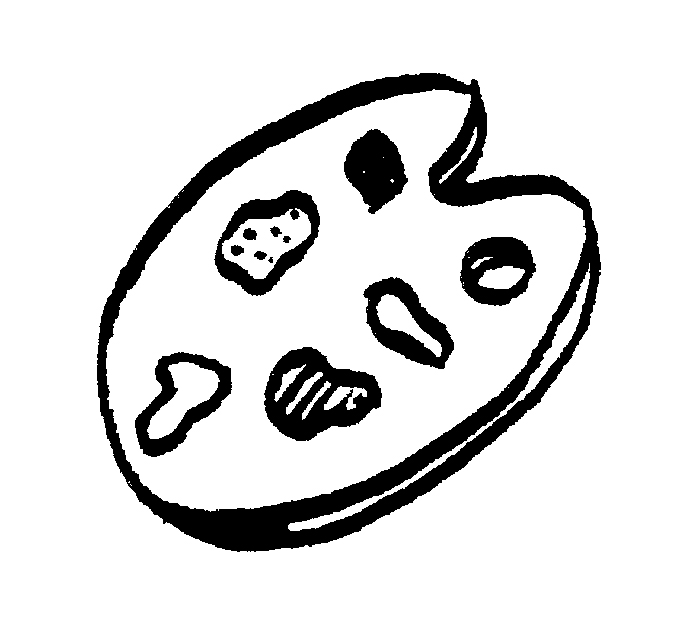 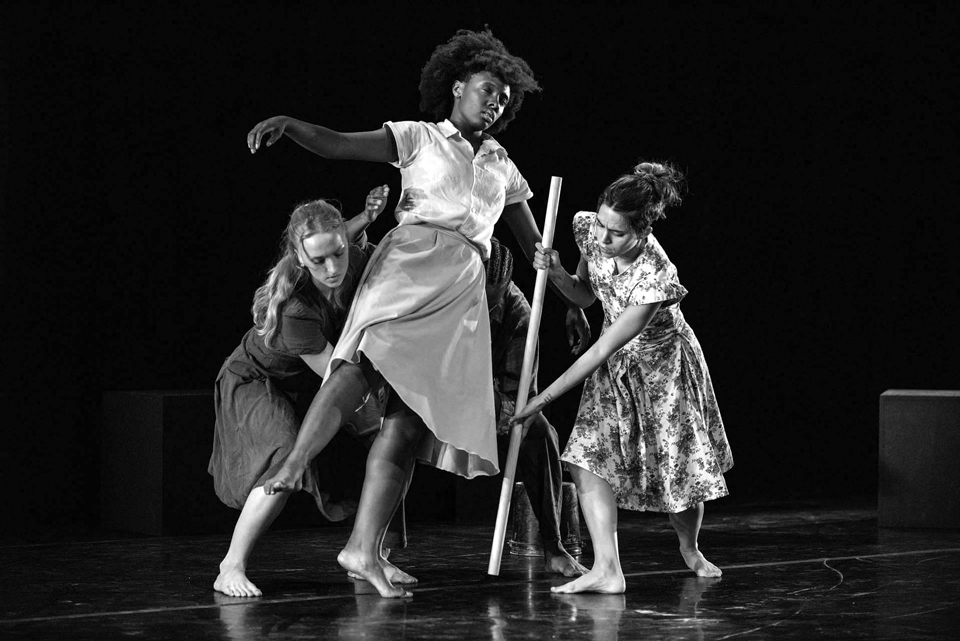 Lauren Ashlee Messina’s Louisiana Flood Stories: 1927 (presented on July 8 and 9) used dance and movement to offer poetic reflections on the disastrous flooding of 1927, an event that revealed iniquities of race, class, and location in its wake. Along with Messina, performers Joshua Bell and Lauren Guynes also perform together in the Marigny Opera Ballet company, joined by occasional collaborator Cassidy Fulmer and Hannah Alexis. Performed intentionally as a work in progress, the spare mise en scène of the performance prioritized the emotion of the dancers’ origin stories of heartbreak, labor, optimism, and transition as they headed toward the literal and figurative stage of the flood’s deluge. Archival films of people stuffed into boats over flooded rural communities and spectral waters were projected over gallery walls and theater space. Messina’s soundscape of early 20th century blues odes to the flood and this period undulated through the CAC, melancholic and uncanny. Onstage, sandbags conjured Katrina, Betsy, Ida, and the infrastructures that failed the people. Even without knowing the history of the state’s efforts to privilege white and commercial communities in the 1927 Flood, the vulnerability of the characters comes through. The initial optimism of Alexis’ tap numbers gave way to lethargy, and the group’s eventual panic to save themselves and each other from the rising waters reached The Raft of the Medusa–level desperation. It’s still a gorgeous tableau, however. Spinning as currents, the dancers’ gestures channeled the dreaded hurricane radar icon, and their cycling transformed to something eternal, reminding us of what is always near—water, and of the precarious existence of those who live outside of privilege. (Photo By Ryan Hodgson-Rigsbee.) —Veronica Cross