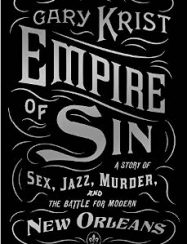 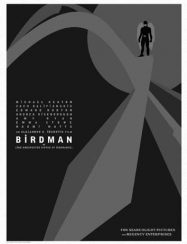 BIRDMAN
ALEJANDRO IÑÀRRITU
(NEW REGENCY PICTURES)
Celebrity Riggan Thompson (Michael Keaton) is turning his back on the huddled masses that  know him for his blockbuster hit Birdman in order to appeal instead to the more refined sensibilities of the New York elite. In his desperate bid to remain relevant, Riggan seems to have split the Birdman  persona from his psyche, but this fragment of his identity is not going to surrender for a run on Broadway. In the days leading up to opening night, Riggan shoulders another opponent in his supporting actor, Mike Shiner (Edward  Norton), the angel to Birdman’s devil. Mike’s modus operandi involves the shattering of the ego, pressuring Riggan to relinquish his sentimental attachments and submit himself to the muse of high art. As Riggan spins in a frenzied  ballet between these opposing  forces, the film itself gradually disintegrates the boundaries between stark realism and pure, unemotional entertainment value. The result is a marriage of the two forms and an ecstasy of cinema. —Alex Taylor 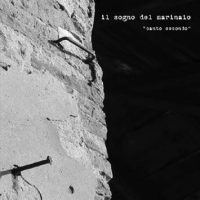 IL SOGNO DEL MARINAIO
CANTO SECUNDO
(CLENCHEDWRENCH)
On a Sunday evening a month ago, I joined about 40 other Mike Watt fans to see his project Il Sogno del Marinaio (“The Sailor’s Dream”) play at One Eyed Jacks. Il Sogno consists of Watt on bass, joined by two accomplished Italian musicians: guitarist Stefano Pilia and drummer Andrea Belfi. After having been blown away by Watt’s fiery performance of the Hyphenated-man song cycle with his Missingmen troupe in the same venue a year and a half ago, I found myself just a bit underwhelmed by ISdM’s whimsical meanderings. Pilia’s quirky guitar doodles and Belfi’s adventurous drumming blended well with Watt’s punchy bass lines, but somehow the music just didn’t quite grab hold of me the way Watt’s previous projects have. Based on that show, and having heard lukewarm reviews of Il Sogno’s first album La Busta Gialla, my expectations were modest at best for their latest offering. But to my surprise, Canto Secundo made my ears stand up and take notice from the very first listen. The same tunes that seemed to drift aimlessly into the rafters at One Eyed Jacks sound focused and deftly executed here. “Skinny Cat” starts out with an infectiously slinky guitar figure, stumbles forward into a math-rock frenzy, then glides home quietly, taking its time without losing direction. In its more frenetic moments, the album has a “Beefheart lite” feel (nothing wrong with that), and Watt’s goofy spoken word spiels work well in that context, especially on “Sogno del fienile.” They toss a flash grenade into the mix with “Us in their Land,” which somehow nods at Rush without feeling heavy-handed. There’s a continuity here; the quickly shifting song parts (and the songs themselves) manage to stand well on their own but still flow naturally into each other. So the dreamy “Auslander” is followed by the Motown-on- adderall stomper “Stucazz,” which itself eventually breaks down to maracas, and it all feels just right. All three band members brought in material for Canto Secundo. The ten songs were developed and recorded over a nine day stretch at Pilia’s studio in a converted barn at his home, north of Bologna, Italy. On the band’s website, they describe their creative process, which involved a lot of thoughtful consideration and experimentation. It was well worth it, as the songs feel well-crafted, but without any hint of the preciousness that tends to infect such an approach. The production, by Bruno Germano, while I wouldn’t call it sparse, is decidedly no-frills, and it serves the music well. You feel like you’re in a moderate-sized room with the band as they play. Having heard this record, I think I would have enjoyed that One Eyed Jacks show a lot more if it had been in a smaller, more intimate venue, and if I hadn’t gone in expecting a ragin’ full-on barnburner. —Lou Thevenot 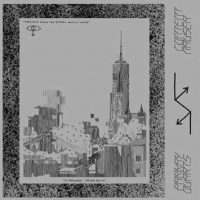 PARKAY QUARTS
CONTENT NAUSEA
(WHAT’S YOUR RUPTURE?)
It’s a bit of a name change for the quartet usually known as Parquet Courts, but their punk aesthetic continues to rock on no matter what they call themselves. Coming on like a more angsty version of the Modern Lovers at first in “Everyday It Starts,” the Quarts take the rest of Content Nausea and stretch themselves further than ever before. Going beyond their standard guitar riffs and song structures reminiscent of the Velvet Underground, they delve into tracks that are outright chronicles of noise backing a tale of anxiety and an attempt to discover its origin in “The Map” at one end of the spectrum and the closest thing to catchy pop the group gets—the hard bop of “Pretty Machines”—at the other end. There’s so much richness in Nausea, in fact, that the band’s straight-on rendition of “These Boots Are Made For Walkin’” stands out mainly because it is fairly faithful to the original, complete with the horn section. Further standouts include the title song, an account of being sick on the detritus of whatever modern life throws at us these days—it must be heard to be believed. Another highlight is the one nod the mostly- Texan band members have made to the South thus far in their career, “Uncast Shadow Of A Southern Myth,” a wistful send-up of Southern cultural signifiers. To take in Parkay Quarts is to recognize punk wordsmiths that continue to stun and amaze, which is reason enough to give Content Nausea a listen, but it rocks so well, it’ll keep you coming back for more. —Leigh Checkman 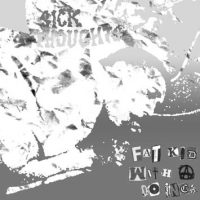 SICK THOUGHTS
FAT KID WITH A 10 INCH
(BLACK GLADIATOR/ SLOVENLY)
This record was a big surprise. Sometimes you forget where you come from. You find yourself collecting $300 rap tapes and black metal demos and movie soundtracks, but you came of age at the Dixie Taverne watching shitty punk bands with some special moments sprinkled in here and there. Here’s a ‘band’ whose sound harkens back to them days… specifically thee best of the mid-to- late ‘90s garage/scuzz-punk bunch (Reatards, Persuaders). It’s one kid, from Baltimore of all places, doing all the instruments; and other times with help from a revolving cast of older, mid-tier local celebrities (Gary Wrong, Buck Biloxi, Camaro Werewolf ) for live dates and recording sessions. Whatever the intention, the opening chords of “Try Not To” (song 1, side 1) evoke the opening of “Stacye” by the Reatards and that’s a real breath of fresh air in a world where others— Ty Segall—try to emulate the ‘Tard but go for his more accessible Kiwi Pop vs. Wipers stuff. The early Reatards and Saints and Killed by Death influences are obvious and gloriously so. Rivaling the late Reatard and Mr. Childish, our Sick Thoughts hero has released ten 7”s, two full lengths, three cassette-only things, and one 10” EP (this) within the span of one-and-a-half years, and that’s not including at least two other side projects! I hadn’t heard any of it yet; so I thought it would be best to get a ten-inch out of the way first. And it’s a keeper. It’s got a big hole like a 45, and every song is catchy punk rock—without a hint of Oblivians/Gories—and a perfectly crispy four-track recording. If you loved the Spider Babies’ Undressed to Kill LP in 2000, then finally there’s a new record you should buy. No download card included! —Michael Bateman 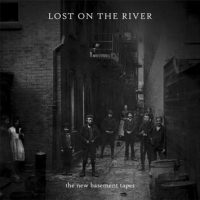 VARIOUS ARTISTS
LOST ON THE RIVER: THE NEW BASEMENT TAPES
(ELECTRO MAGNETIC/ HARVEST)
Just when one thinks there cannot possibly be anything more to be discovered in Bob Dylan’s figurative basement, along comes a set of never-before-sung lyrics from the same period as the famed Basement Tapes, sent along to producer T-Bone Burnett, culled down to 16 samples, and passed to Elvis Costello, the Carolina Chocolate Drops’ Rhiannon Giddens, My Morning Jacket’s Jim James, Marcus Mumford, and Taylor Goldsmith to work with as they wished. What emerged is quite similar instrumentally to the work The Band lent to the original Tapes and to Dylan’s early folk music––a possible consequence of Dylan giving Lost On The River his blessing, likely compelling Burnett to handpick artists that would take that approach. The overall feel of the album retains the tone of the best of Dylan’s music from that era, with the added bonus of the artists involved giving the work their all. Giddens proves to be the most consistent standout, most notably on “Spanish Mary” and “Lost On The River #20” (a more wistful, lonely rendition of Costello’s “Lost On The River #12”). But each artist brings a memorable turn to these lyrics, culminating in the exhilarating “Six Months In Kansas City (Liberty Street)” that has the stamp of all the assembled musicians coming together in joy and reverence to pay tribute to Dylan. River is one of the better tributes to Dylan out there right now. —Leigh Checkman