By RENARD BRIDGEWATER for MaCCNO June 2021 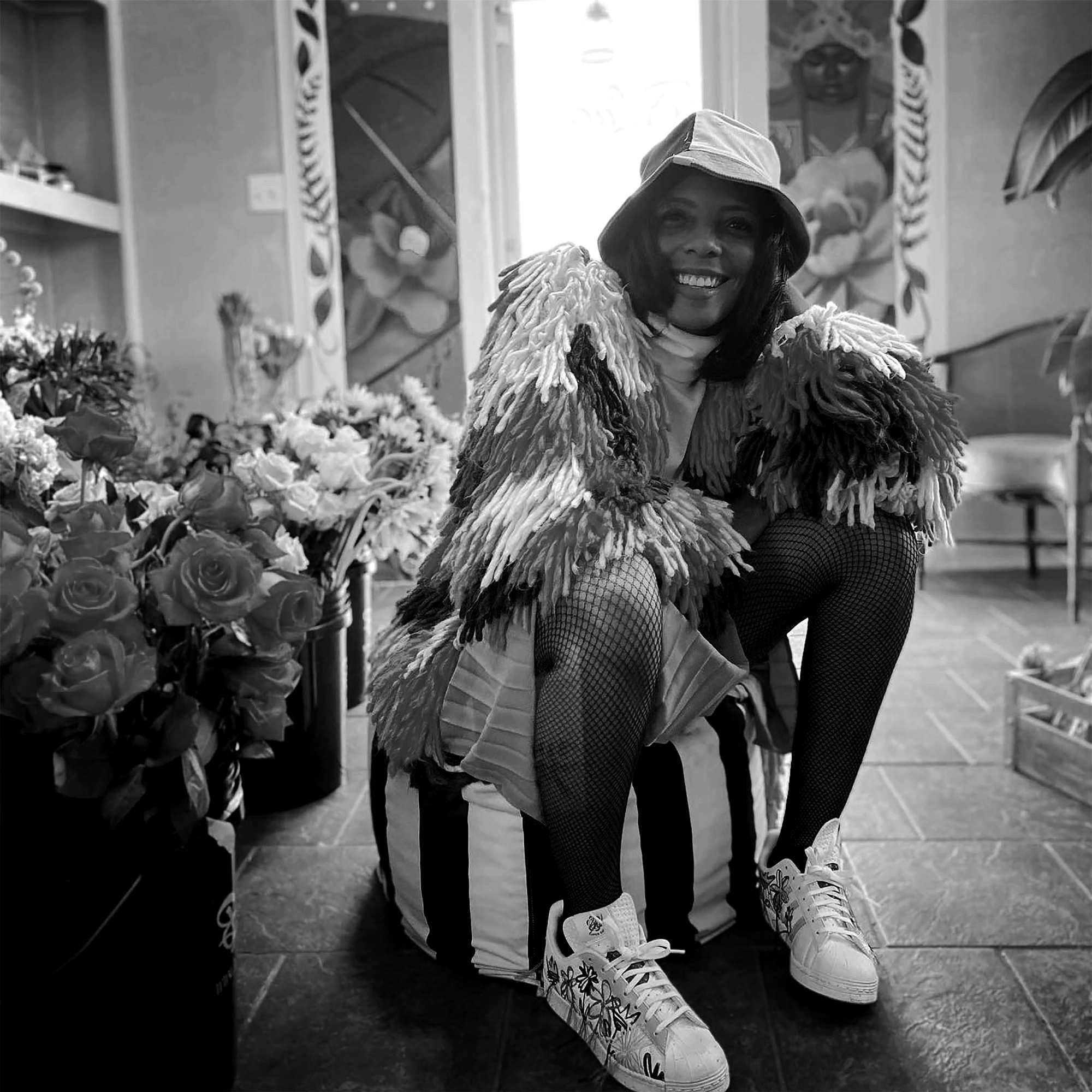 Despite several beloved New Orleans dives, restaurants, and small businesses shuttering due to the COVID-19 pandemic, Lower 9th Ward native, licensed florist, and floral designer Brandi Charlot opened Blucid (Bih-lu-sed) Floral last fall. The flower bar’s name takes inspiration from the “B” in its owner’s name, and the lucid denotes “having that clear vision or understanding between my client and myself,” says Charlot. Prior to opening Blucid, Charlot curated events (birthday parties, weddings, etc.) throughout New Orleans and briefly studied under celebrated wedding planner and event designer Preston Bailey for several days, which helped further develop her mechanics and innovation. During the last year of stay-at-home mandates, remote work, and lack of social activities, Blucid has provided a “field trip” of sorts for New Orleanians who have been stuck at home during the pandemic. Inside the teal double shotgun—that previously served as her workspace—Brandi gives customers the option to pick and choose their flowers à la carte style, while also listening to music that’s just as vibrant and colorful as the space they’re patronizing. Neon signs adorn the shy pink walls while yellow shelving holds photos of Black Masking Indians, Zulu Tramps, and even of Charlot herself, a member of the Treme Sidewalk Steppers Social Aid & Pleasure Club. Murals combining her two loves of culture and flowers bookmark the entrance of her small business.

Although she considers opening Blucid “the best decision I’ve ever made,” it hasn’t been without its fair share of challenges. In a business where women make up 84% of the country’s floral designers, only 2.7% of them are Black. Combine that with Ecuador and Colombia’s flower shortages (due to pandemic-related shortfalls and protests fueled by police violence, respectively), along with local vendors’ racist refusal to sell to Charlot directly, and you’d have a perfect storm that would lead this small floral business to assimilate into the 41% of Black-owned businesses that closed during the pandemic. Despite these obstacles, Charlot’s succinct business model of “good product and great customer service” has garnered her the continuous support of her community. With Blucid Floral, Charlot is attempting to give back to the same Lower 9th Ward neighborhood that has poured into her over the years. Learn more about how this budding small business owner has thrived, despite this time of both economic and personal volatility for so many, in the following edited excerpts.

What was the New Orleans that you grew up in like?

“Back That Azz Up” [laughs]. It was just fun times. The Lower Nine was different. Of course, a lot of houses are missing and stuff like that… It was still DJs, second lines—there was a lot more DJs. We don’t have second lines, but just that timeframe, it’s just different from what it is now. We had a lot of Black home ownership here in the Lower Nine, a lot of Black businesses. And we didn’t really consider them small businesses, it was just a business in the neighborhood. My uncle had a TV shop. My grandmother had a real estate business, hair salon. There was always different types of entrepreneurs inside of this community. I just came up in that era, where it was like gold teeth, Starter jackets, bus tickets, you know—just that whole ‘90s era. I just thank God I was able to really experience that.

When we’re talking about floral design and small business ownership, what did that pathway look like for you?

So I wound up getting into the floral game and it has truly been a blessing, because four things God promised me when I resigned from my job [Charlot worked in the school system as an interventionist]… I won’t name all of them because they’re personal to me, but two of the things was that, it was going to make me a better person and I still was going to be able to minister and reach the youth in a space where I come from. Cause when you’re in a workspace, they only let you go so far. But with floral and being an entrepreneur, l can go as far as I dream or I choose to go.

Being a Black woman in the floral game, what obstacles have you faced? I believe I saw something where you’re inspired by controversy. Tell me why that is.

As far as the floral game, it was a lot of controversy getting in because I’m a Black woman. They see competition when they see what I possessed and what I present. It’s true, I did everything backward according to society. But if you ask me, I did things the way I felt that my life should go. I had my kids young. That was controversial because people said everything, but never told me my son would be great—a scholarship recipient. I say all that to say, controversy has been my best friend. So if I go through the controversy, I know that something good is going to come out of that that’s meant for me. My life has proven that.

Thinking about culture and keeping it going as it’s continuously being erased, for us to be able to have a New Orleans that’s a reflection of the old, how do we keep that going? How do we perpetuate culture in a way that makes sense to us as millennials in this moment, but also for our Gen Z folks?

Exposure—continuous exposure and educating them to our knowledge. We have to start [with] our knowledge because you don’t want to start making up no shit. You want to speak on reality, what’s in front of you, what you saw, or the person next to you and how it made you feel. But you got to try it. You got to experience it. It’s a feeling like never before! So, in order to keep the culture going, you got to put them in the atmosphere. You gotta put them in the environment. Some of these kids have never even been (before the Katrina) off this side of the bridge. So, the only way that this culture will remain, we gotta put ’em in it.