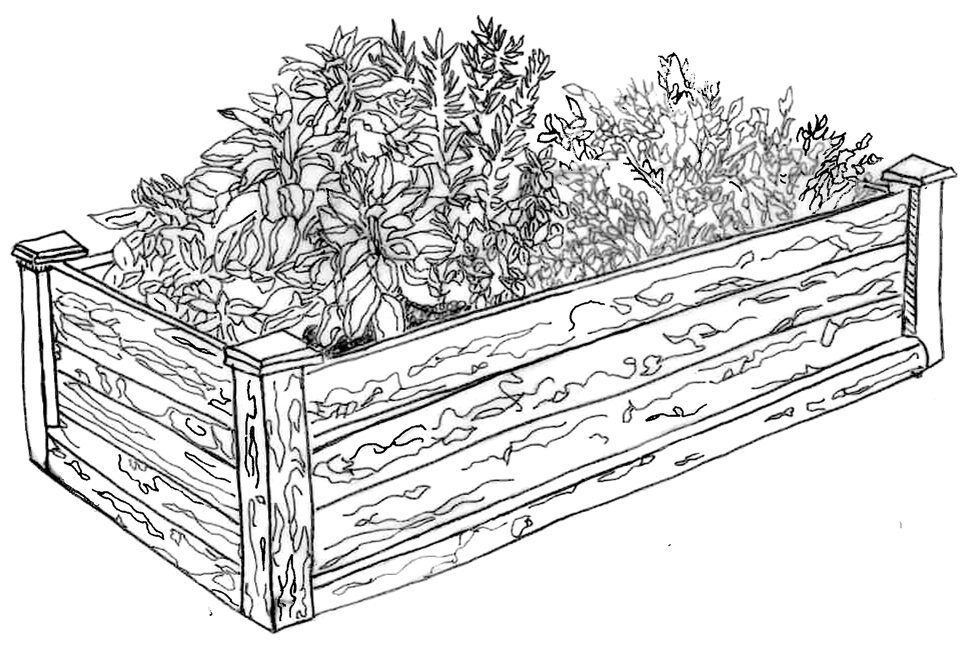 Last month I expounded on my fledgeling experiences in food production, from my first vegetable garden (a watermelon patch in Richmond, Virginia) to my proper foray into community gardening here in New Orleans. This month, the journey continues as I spread my wings and let my feathers flail about in the windy world of farmers market capitalism.

The name Southbound Gardens was born of another name my operation was given, “Scumbag Farmery,” by Justin Devillier, executive chef and owner of La Petite Grocery. I used to show up at restaurants’ side doors in torn up Carhartts with silly dreadlocks hanging from the back of my head, garbage bags full of produce and a scale in the back of my truck, looking to sell my organic wares to whatever chef would bite. Scumbag Farmery was a more-than-appropriate nom de guerre but the branding wasn’t quite on the mark. Devillier had been offered a piece of land a block away from the restaurant to start a kitchen garden on, and he asked me if I had the power to make that garden real. I was not sure that I did, but I certainly said that I did. Up until this point I had done all of my food growing with pretty much no capital, using only what I could access for free or extremely cheap. It worked, but I knew I could make things work better, given the means. The next few years were equal parts experiment and applied knowledge. And while I learned a lot about growing food with actual resources at my disposal, I learned even more about trying to make small-scale food production actually make financial sense. It never quite did. When the social capital and marketing power of an organic, hyper-local kitchen garden are not taken advantage of, it’s hard to make growing on such a scale profitable for a restaurant. It was never cheaper than buying from a wholesale produce distributor. Not even close. But the produce itself was excellent. With the small budget allotted to it, the La Petite garden had soaker hose irrigation, new soil piled on top biennially, mulch added regularly, manufactured organic fertilizer, and beautiful, well-kept beds made of ancient stone and levelly-laid cinder block. Ten hours a week there was more than enough to keep those 3,000 square feet weed-free, beautiful, and full of the most well-respected vegetables that side of Canal Street.

Before partnering officially with Jordan Bantuelle in late 2014, I was helping him out at The Urban Farmstead, a piece of land he had acquired to use as a permaculture education space. It was a jungle when he was first given stewardship of it. And though he’d tamed its wilds with a fierceness, the only food growing on this homestead were some fruit trees that had been established years before. I offered to turn it into a growing space in exchange for half of whatever income I could pull from the land. This eventually blossomed into the beautiful, messy business that was Southbound Gardens, a nursery/urban farm educational hub and event space. The space itself became a stalwart, multifaceted urban farm that pumped out all sorts of organic produce for a solid seven seasons. It was quite permacultural as well: we built most everything there with what was already on site, pulling other materials from rubble piles across the city. It was a mishmash of brick and mortar and rotting wood, forgotten irrigation line and old rusty tools. I spent a solid third of my waking life there for a time, and we had countless volunteers and employees helping to make a trash-heap-turned-jungle-wasteland into a beautiful and functional farm for a solid four years. Still, in the end it was not beautiful enough for the landowner, and we were asked to leave for lack of aesthetic attention to detail in February of 2018.

The owner of the property that The Urban Farmstead lay on also had another property around the corner, which I was given an opportunity to farm in late summer of 2014, before Jordan and I had partnered. Only the front third of the property had adequate sun to grow on, and the entire space was covered in bidens and cayratia, both insanely powerful weeds that are near impossible to rein in with any sort of permanence (without glyphosate or other unwelcome chemicals). I tilled that land fiercely; I burned it with my trusty weed dragon (which is basically a flamethrower); I covered everything I could with cardboard; and after that, I weeded a solid 1600 square feet of soil each week. This was to be my urban farm oyster upon whose tongue I would manifest the most productive pearl of organic urban farm this city had ever seen. Alas, my work and my vision were not enough, and after four months of hard work and one third of one growing season, I was asked to move on because the landowner couldn’t see that the magic I was weaving had only just begun to manifest. There are no weeds there today, only dirt, as it is home to a happy herd of goats and chickens who have long since eaten everything green on the property.

Southbound Gardens was asked to make something of a half-forgotten and quarter-finished garden (behind the Southern Food and Beverage Library) that had been started by a long departed Americorps volunteer. The organization offered to help pay for the trees they wanted installed and for initial mulching costs, but we agreed to take care of everything in exchange for rights to sell whatever we grew there. It was a humble space that we turned into eleven large raised beds (some of which were never quite brought up to snuff for lack of decent soil) and six citrus trees that I believe are still thriving today. The initial build-out of this particular garden had much promise. It was manageable and it was symmetrical. We built the bed frames with broken concrete from the old foundation, and the place was charming and quaint. Unfortunately, shortly after this buildout was completed, SoFab began discussing construction projects on the space, and I was very nervous about investing time or money in making the most of the space with its life in the balance. That construction never came to pass, but construction of a new building unrelated to SOFAB did begin right next door, and the effects on our garden beds were devastating. Trash was regularly thrown on our beds, gutted wood covered entire sections of the property, ladders were left strewn across the space, fences holding vining beans were knocked over, irrigation lines were repeatedly broken. I did get really good dill harvests out of there for a few seasons in a row, and some sturdy seed to boot. I also learned that radicchio grows all year long, and does not suffer for flavor in the heat of summer as it’s already so bitter to begin with. I grew basil here as well. It was supposed to be Southbound’s basil bastion, but the downy mildew epidemic was in full swing and I could not grow healthy and full basil if the world had depended on pesto that year.

Started by Rob Huffman of “Our School at Blair Grocery” fame, I was offered to take over this garden by a friend who managed the wholesale food distribution arm of Dryades Public Market. Rob had set up a stunning and highly functional growing space, and I figured all I had to do was plant some seed to get the ball rolling again over there. But I reckon Rob had seen the writing on the wall in a room that I’d barely yet stepped into. A couple months after receiving stewardship of this garden, the friend who put me there was laid off, as the entire wholesale arm of the market was closed, and not for lack of profitability. The CEO had just walked out on the project and there was a cloud of general anarchy pouring its chaos over the market, and it wasn’t the sort of anarchy I like to get behind. The land I worked embodied the romantic aftershock of that anarchy thereafter, becoming a guerilla garden upon which I labored in the plain sight of day. I continued to grow there, figuring that if any leadership were to prevail and reorganize the market, they would eventually reach out and either kick me off the space or offer a fresh proposal. I never heard from a soul. I left the garden alone after all of my crops were mowed down, I presume on accident.

I moved from the Irish Channel to St. Roch about a year ago now, and my backyard is entirely shaded by a pecan tree, an allelopath, meaning it actively inhibits the growth of other plants. I have a substantial nursery where I grow a ton of starter herb and vegetable plants from seed for others to plant in their gardens, but it is only a month ago now that I resumed growing my own food to eat again: vegetables, right outside my front door, in three cute washtubs screwed into a five foot plank which rests on four cinder blocks. Where once I managed six substantial urban farms across the city simultaneously, today I grow on six square feet. It was enough then, and it is enough now. Your turn.