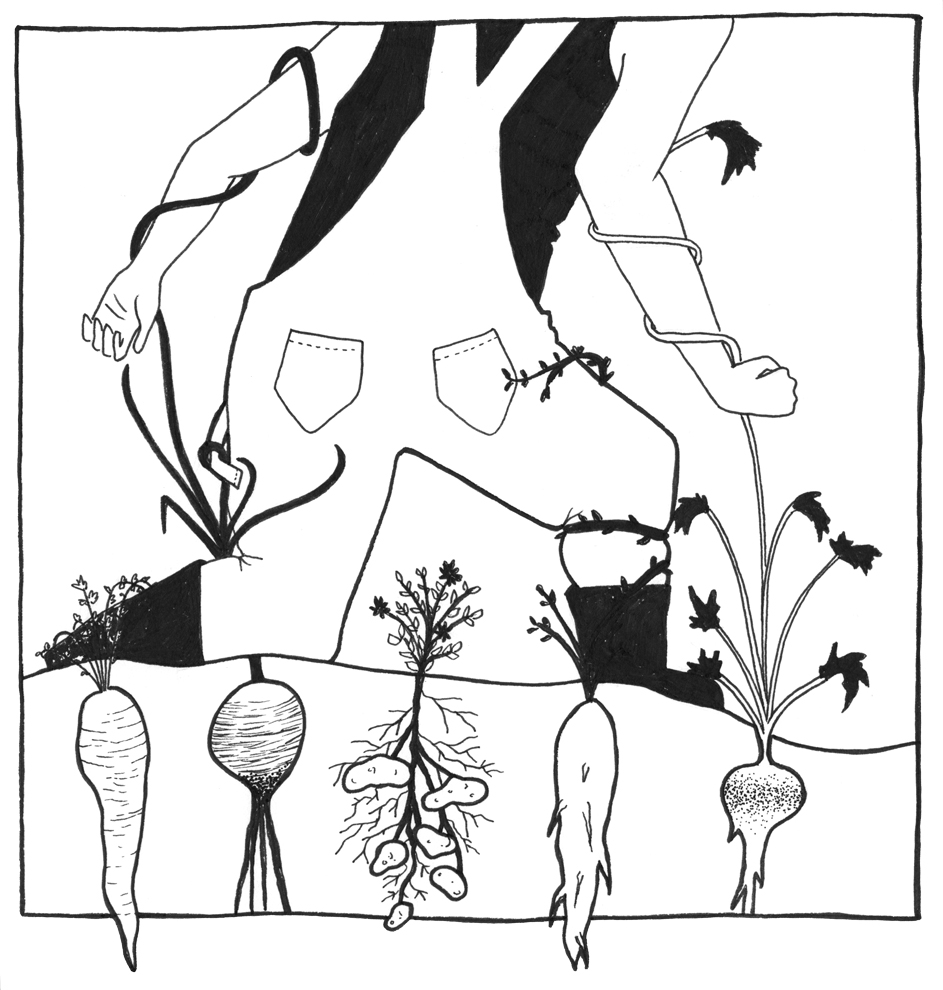 Our dialect is absolutely inundated with analogies and metaphors about roots. The internet taught me that a metaphor that defines one’s perception of reality uses a metaphor with roots in its very name: root metaphor. A root metaphor defined is, “An image, narrative, or fact that shapes an individual’s perception of the world and interpretation of reality.” Having gotten that out of the way, I’m going to shine a light on the reasons why I rarely elucidate on root vegetables in this publication or anywhere else in my life. In my root metaphor, root vegetables are by-and-large not worth growing.

Most planting calendars will tell you to start planting root vegetables around now. Any time between September and February is generally accepted as a great time to throw your carrots, radishes, beets, potatoes, rutabagas, turnips, and every other plump, ground-loving vegetable out there into the dirt. I contend that it is never a good time.

Before going into the more relatable reasons why I find root vegetables not worth the time, I’d like to delve briefly into hard truths of the cutthroat reality that is the wholesale local raw food market. In urban farming, we don’t have a lot of space or enough time. You don’t like to spend a lot of money and don’t have patience for imperfect product.

Root vegetables are a commodity product that consumers tend to show little respect for, by way of their wallets. It is very hard for me to sell you a pound of radishes, carrots, or any other root vegetable for more than about $3 a pound—and that’s usually asking too much. Tomatoes, lettuce, herbs, and the like can all be sold for significantly more.

Unlike fruiting vegetables and greens which can be harvested repeatedly, root vegetables are a one time, labor-intensive product. Once a carrot comes out of the ground, that’s the end of that carrot and the space it lived in, until something else can grow to maturity in that same space. On top of that, root vegetables take a lot of time to clean. We have relatively high clay content in our soil, and somehow that creeps into raised beds too. It takes time to rinse those clay-ridden root vegetable’s crannies to an extent that is acceptable to the general consumer.

Finally, with the notable exception of radishes, most root vegetables take at least three months to mature. That is a long time to wait to bring something to market that is only going to sell for $3 a pound (at best).

On top of all that, I’m just really bad at growing root vegetables. All too often, they end up coming up too small, shriveled, eaten, rotten, or just kind of not-that-delicious. I don’t know with scientific certainty why this is so hard for me, but I’ve got a few hunches, and I’m about to lay them on you. Also, none of this applies to potatoes. Potatoes are great, easy to grow, delicious and dependable, and everyone should be growing their own potatoes. The only reason I don’t mess with them is because of all that market capitalism stuff I alluded to earlier. Tell me you’re going to pay me $3 for a potato and I’ll reconsider.

ROOT VEGETABLES IN THE SOUTH

The golden rule when it comes to growing root vegetables is even and regular watering. Irregular watering leads to irregularly-shaped plants. I think meteorological routine is a literal impossibility around these parts. There is no way to ensure that your rutabaga are going to get a steady handout of water day by day, because our skies are out of control and getting wackier all the time. Usually the rule requires much and plenty of this even-handed water to make a perfectly plump, deep root vegetable. But we’ve already got too much moisture in our soil and atmosphere for most of these morsels, and that’s why they are so prone to rotting.

Root vegetables are a commodity product that consumers tend to show little respect for.

The next most important condition is loose, friable, uncompacted, fancy-free soil. The looser the soil, the easier it is for a root to get deep in there. While our native soil is typically compacted, heavy in clay, and all around hard to set some fat roots in, raised beds or container gardens with fresh, loose compost should take care of this problem. It seems not to, though. Again, I blame the eternally dewy atmosphere for this shortcoming, without one shred of evidence to back that assertion up. Our soil just compacts a little faster in the constant humidity, and our root veggies feel less need to grow deep and thick when water is so readily available to them without all that hard work.

Really though, the problem is just that it’s hot down here. Common root vegetables, with the exception of sweet potatoes (which, like potatoes, are fantastic and grow with ease and you should totally grow them), are traditionally cold weather vegetables. They are not necessarily frost lovers but none of them like warm soil. And our soil, especially for the last three years, has never really stopped being warm, even as we’ve had frosts. High temperature slows root growth and makes them prone to rot. More significantly, it makes them taste way less delicious. Root vegetables store all their sugars in the goodie bits when it’s cold out, but use that energy to grow luscious green tops when their environment is warmer. To regulate the temperature a bit, you can mulch your beds, but expect no miracles.

Space is also an issue. Supposedly root vegetables are more selfish with their soil real estate than other food plants. Most don’t need much space, but be sure to give them all of what little they ask for, as they are exceptionally prone to getting stunted or sick when they have too many foreign neighbors. As anyone who has seen any of the myriad gardens I have tended over the years knows, I am really bad at keeping up with weeding. And maybe—just maybe—therein lies all of my root veggie growing powerlessness. If you’re as bad as I am at yanking weeds on the regular, mulch may help you on this front as much as it does with temperature regulation.

I would like to make a quick note regarding the cultural sensitivity of my use of the category “root vegetable” before wrapping this up in a glittery ribbon of pessimism. I am referring strictly to common Western root vegetables here. There are tons of more sub-tropically inclined root vegetables that grow great here, such as turmeric, yucca, yams, and ginger, to name a few. I’m just picking on all the common ones, because they are common to more temperate lands, not so much the Gulf South, and they were never meant to thrive in a place like this. Also, for the plant nerds out there whose nerdom surpasses mine, I am referring to “root vegetables” as anything that grows underground for ease of less nitpicking minds, not just “true” root vegetables.

So, if you want to walk hand-in-hand with me along my path of dreary hopes and broken dreams, don’t grow root vegetables. If instead you don rose-colored glasses that blast lasers through all manner of trepidation, heed this advice and you may yet find the light that I have already surrendered to the void: