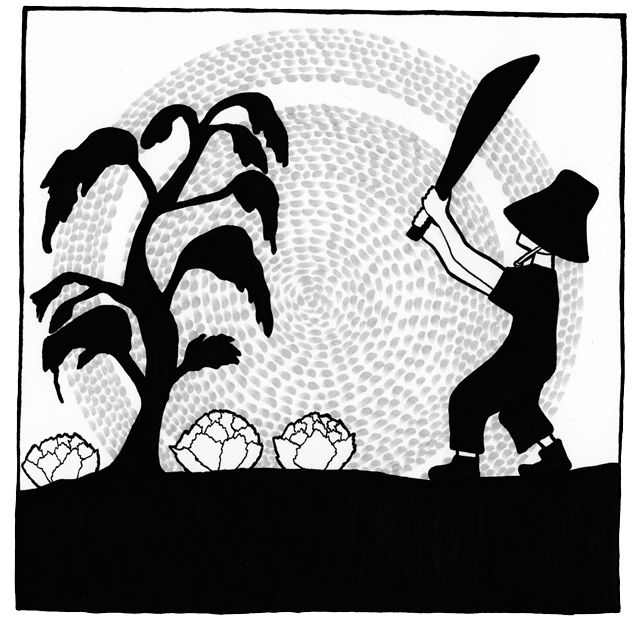 Plants are resilient organisms, far more capable of surviving and thriving laceration, amputation, decapitation, and all other manner of mangling in a way that even the most regenerative fauna of planet Earth cannot aspire to aspire to. Whether the neverending story of trauma that is most plants’ lives creates an eternal hell for flora, wherein their suffering and torture never ends by the hands and mouths of humans, deer, insects, and, well, every other carbon-based life form… or it’s a catalyst for beneficent adaptation to their role as planetary ambassador to the sun and willing giver of translated solar energy, we may never know. But  their magical ability to keep growing deserves homage either way. So let us now bestow unto them our reverence and discuss how best we can use their powers to our advantage.

Obviously there are certain plants that brazenly ask us to eat their fruits so that their seed may spread far and wide. This includes most ‘fruits’ in the consumer sense of the word, and a lot of the vegetables we eat as well. Essentially anything that has seed in it was designed to be eaten by you, so that said seed may be carried far and wide. But we also eat all sorts of other parts that plants decidedly didn’t grow for the express purpose of our consumption, or their procreation. Herbs, leafy greens, tree leaves, flowers, roots, and tuberous vegetables are all plant bits that are designed to collect energy, store energy, and attract other critters for health and wealth.

While harvesting their roots and tubers is inevitably pretty destructive and often terminal, most plants seem to have adapted to being at the bottom of the visible food chain pretty magnificently, considering the chronic destruction of their above-ground parts. Most plants, when cut, will—like a hydra—put out double or triple the growth from the point at which they were cut. Plants that have initial upward growth habits, such as basil, once cut at the top, send hormones to their base which encourage the plant to grow many new stalks from the base and bush out. Ornamental flowers are regularly “dead-headed,” where flowers past their prime are cut off the plant to encourage it to produce more flowers. This practice in particular freaks me out a little, not just because of my aversion to the name, but because I have a habit of relating animal ethics to plants, and dead-heading seems particularly abusive and manipulative towards a plant’s reproductive system, and all for the sake of beauty, not nutrition. But that is a discussion for another day.

Any way you slice it, there’s more than one way to skin a plant.

Once we get past the fact that we are inevitably going to “hurt” plants if we’re going to eat, we can learn how to hack at them for maximum human and plant benefit. Again, having been gnawed at since time immemorial, plants have adapted pretty well to surviving regular consumption—some with poison, but most with resilience. So here are some general rules to follow.

Always cut your plants with a sharp tool if you can help it. I prefer a small machete or knife to pruners, but either one, or scissors, or anything sharp will do. Cutting a plant is like cutting a person—the sharper the tool, the easier for the plant to heal the wound. If you tear and rend at a plant’s stalks and leaves to harvest, you will inevitably cause damage to parts of the plant that you aren’t taking with you; and you will leave a gnarly wound that can easily become infected or diseased.

Always harvest the oldest plant matter first. The oldest bits will always be the outermost part of the plant. We’ll get into how to do this with different plants later. This makes sense for a few reasons. The older parts are more likely to get sick, so you should harvest them before they do. They are also inevitably going to be larger, so you’ll get more bang for your buck. Most importantly, when you cut the older parts, the plant can transfer energy that it had been expending keeping its older parts alive over to the younger parts, which will now grow exponentially faster.

This is a general rule that, as you will see in a minute, I don’t consider totally universal; but it is a good one to follow when in doubt. Take no more than one-third of the leaves (or branches or stems or whatever) from a plant each time you harvest.

You shouldn’t. Novice harvesters will often want to pick one leaf off of a plant, or pick one leaf from each of a few different parts of a plant, thinking this is less harmful to a plant than taking off a stem’s worth of plant matter or focusing all the damage to one place, especially when picking herbs. In fact, the opposite is true. Picking meekly at its leaves doesn’t trigger a plant’s growth hormones the way more substantial harvests do, so instead of encouraging fresh and more vigorous growth, you are just robbing a plant of its photosynthesis machines and giving it no means to recoup.

Nevermind the one-third rule with these plants. Harvest these guys by grabbing the whole head of leaves and cutting an inch or two up from the soil. The idea here is to cut all of the mature and mid-sized leaves while leaving alone the youngest, newest growth in the middle of the plant. Even if you graze the top of the babies you’ll be alright. Harvesting this way, you can get a new head to cut every two weeks or so, and harvest a single plant three to five times on average.

This is pretty much all of your Brassicae, such as kale, collards, and mustard greens, but includes many other plants as well. You always want to harvest from the bottom with these, cutting the oldest and most mature plants to eat, and cutting those that have already yellowed off and letting them turn back into soil beneath the plant. The one-third rule absolutely applies here. If you abide and have at least two or three of these plants, there should always be enough for you to eat.

These guys are barely cut and come again, but you can still try. You have a very short window to harvest their frilly heads before they bud into flowers, so keep an eye out when looking to eat them. If you cut off a head, many new small ones will grow, but they will be very small. After you cut one proper head of broccoli off, you may get a whole bunch of baby heads coming up, but each one is going to be about the size of like, one normal bite of broccoli. I prefer leaf lettuces to head lettuces because the head lettuces are usually one time harvest situations. But if you don’t cut them at the base and treat them as leaf lettuces (above), you can still get multiple harvests from them.

These herbs in particular grow very similarly to lettuce and arugula. If you don’t need a whole lot, it’s OK to just take the stems you need, from the outer leaves of the plant inward, as you would with other leafy greens. If you’re harvesting a bunch, though, it’s best to gather up all the mature bits and just slice, three or four inches from the soil, above the baby, bright green growth in the middle.

Basil likes to grow straight up when they are young, and react profoundly to that hormonal snipping I spoke of earlier. It is best to harvest basil in clumps. Usually there will be three stalks that are somewhat conjoined—cut below that joint. This will encourage the plant to sprout new stalks along the whole plant, and each time you harvest this way, you will be turning your little basil stick into a well-rounded, bushy, beautiful leaf-making machine.

There are all kinds of herbs that grow all sorts of ways, but most common kitchen herbs that haven’t already been discussed sprawl out, versus grow up. Follow the one-third rule with these, and always cut close to the base. If you have a long tendril of thyme, don’t cut half of that tendril and half of another, just cut one whole tendril. Always to the base if you can.

Any way you slice it, there’s more than one way to skin a plant. If you’re going to take part in the circle of life, you’re going to have to do some damage. But if you harvest your plants with something akin to compassion, or at least cold and calculated medical skill, you will get far more out of them and they will have far more comfortable lives. A healthier plant means a healthier you.