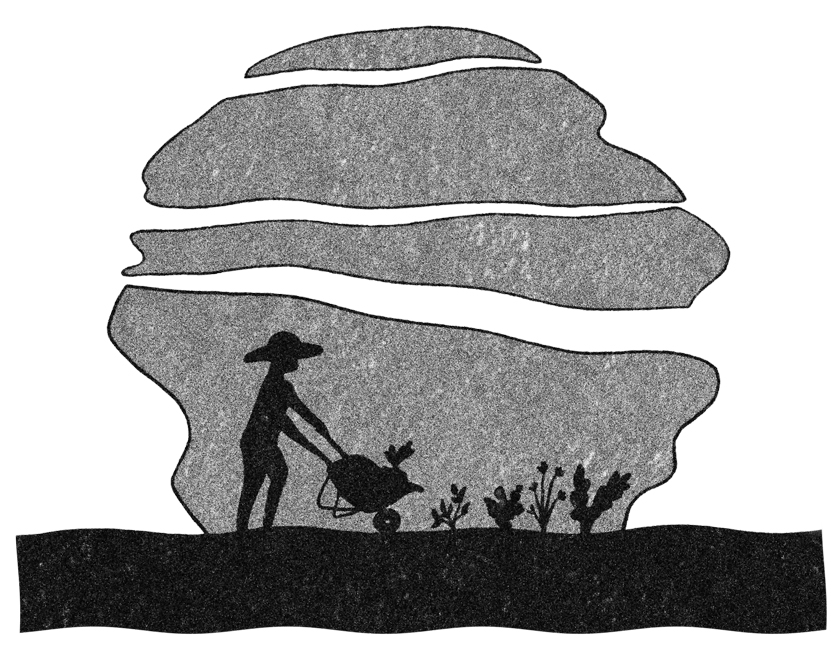 There’s far too much to take in here, more to find than can ever be found. But the sun rolling high through the sapphire sky keeps great and small on the endless round.
—Elton John

The premature heat of spring has fallen upon us, and all of your leafy things are growing weary of their mortal coils which once burrowed so readily into the verdant, loamy beds of dirt that you lovingly concocted for them over the weeks and months and years. Their roots are strong, but the sun is stronger and their time has come. The lettuce has bolted, reaching starward so that its babies may be broadcast over the soil for a better and brighter future than they themselves have ever known—but like, fall bright, not midsummer bright. The kale is wilting and will never again stand so tall as it did in its glory days back in February, when the days were short but the world seemed so full of possibility and promise. The chard is riddled with holes and the collards taste terrible, having pushed all their potent potions to the forefront in a futile effort to repel those insects that are devouring their neighbors in all directions.

A lot of these leafy things that you can grow in the deep summer in New Orleans are called spinach. Also, none of them are spinach.

It is time to let go. In the circle of life, it’s the wheel of fortune. Some say eat or be eaten, some say live and let live. When I was 14, every time I got high in the woods I would run away from my friends and traverse the forest some couple hundred feet in front of them, popping out from behind a tree every now and again to exclaim, “You follow old Rafiki, he knows the way.” Things change, but only just so.

You cannot grow lettuce. You cannot grow kale. You can try to grow chard and lettuce but it won’t be the way you wanted it to be. It’s OK. There are leafy things you can grow. I couldn’t say why, but it turns out that a lot of these leafy things that you can grow in the deep summer in New Orleans are called spinach. Also, none of them are spinach. Actual spinach is really hard to grow here most of the time. You follow Rafiki. He knows the way. Sort of.

Malabar Spinach
This gem is probably the most common-uncommon green hanging around town these days. I’m not sure who else has been proselytizing its beneficence but Malabar has really been making moves and shaking up the summer vegetable bed complex for a few years now. Most garden centers carry it even, and seeds are easier to come by all the time. This one actually tastes pretty great, but it does have a slimy okra mouth feel to it, so if that’s not your bag maybe put these guys to the side. Dan Causgrove, the chef without whom I would not be the Dirt Nerd you read before you today, used to make this cheese-stuffed Malabar leaf amuse bouche at La Petite Grocery that was totally devoid of slimy texture, so I know there is a way, I just don’t know what it is. Growth-habit wise, this is actually a crazy vine and needs some serious trellising if you want it to work for you. Even if you treat it with disregard and disrespect, it will grow throughout the summer but it won’t like you very much. Harvest leaf by leaf as needed, and at the end of the season when it gets all gnarly, be sure to gather all the seeds along the vine. If you won’t grow them yourself, give them to me. I’ll start the seeds and sell the plants back to you. It’s the Circle of Life, like the Wheel of Fortune.

This guy has tons of names too, but for the sake of proving my point regarding things that are not spinach being called spinach, we’re going with “Chinese Spinach.” Some of those other names include Ong Choy, Kangkong, water convolvulus, and the regionally appropriate swamp cabbage. This is an extremely common green in Southeastern Asian cooking, as well as, well, China. It also grows in our region all summer long like a dream. It also may be a little bit illegal to grow here. It’s been classified as a class A invasive weed by the USDA, which should be interpreted as a testament to its fantastic growing power. This guy is harvested by the shoot as needed, and the shoot (along with the leaves) are generally sauteed up and treated more or less like broccoli raab in the kitchen. It has a pretty unique taste, with a bit of an inherent garlicky fish flavor to it, in a decidedly very good way. Chinese spinach does seem to pop back up year after year in my experience, so depending on where you stand regarding permaculture and perennials versus native ecosystems and invasive species, its longevity and endurance can be seen as a really wonderful or really terrible thing. It’s definitely both, so quit being so divisive and hakuna matata or something.

Also known as Tetragonia, this plant’s leaves actually look a lot like spinach. This guy is not so low maintenance as Chinese Spinach or Malabar Spinach, but it still thrives in our summer weather with a little bit of love, and it’s still got a name with “spinach” in it. If New Zealand Spinach isn’t watered regularly, its growth is significantly stunted and it begins to taste very astringent and all around bad. If you eat one of its leaves raw after a dry spell, your mouth and throat will be very unhappy for half an hour at least. This is pretty much the opposite of the slimy mouth feel that Malabar spinach so readily provides. The good news is, once watered, the fairly spinach-adjacent flavor will return to these leaves, and barring that, a quick sauteeing will burn off most of that nasty taste and leave only the delightful stuff at the end. A fun fact: indigenous New Zealanders did not see New Zealand Spinach as a viable food source. It was only when the colonizers landed upon Middle Earth that this plant came onto the dinner plate scene. I have no vague connection to The Lion King to make here.

In the garden, Chicory has become my secret weapon and new best friend. I don’t know why there isn’t more of a common rallying cry or cultural awareness around chicory as a summer green around these parts. Maybe I’ve just been getting lucky and none of these plants should be working as well as they have, but it has been my experience that chicory plants grow here all year long without much complaint. You may know chicory only as a coffee substitute or an additive, but it’s actually a pretty huge plant family that includes radicchio and frisee, two greens you likely have heard of. Summer tends to turn sweet things bitter, and it may be so with radicchio and frisee; but they are so bitter to begin with that whatever the heat’s doing to change their flavor profile is easy to overlook. Harvest these plants by cutting them close to the base, about a centimeter above the soil. It will take a month or so for them to grow new heads thereafter, but these are not one-time harvestable plants and again, they will keep coming up through all seasons until the light takes them to the elephant graveyard.

Hibiscus tea is brewed with the calyces of this bush, but the leaves are edible as well. The folks who eat them call them sour leaves. Those folks are mostly Burmese, but there’s no reason why you couldn’t call them sour leaves even if you’re not of Burmese descent. They taste great fresh; they taste great in soup or salad; they just taste great. Also, Roselle hibiscus plants look like regal vampires, but vampires that love being in the sun and heat and whose lifeblood you suck instead of the other way around.

A few other greens that purportedly can hang hard in the summer fun salad crowd are purslane, arugula, and molokhia. In my experience, purslane doesn’t actually tolerate the heat too fantastically; it likes to go to seed after only a month or two. Arugula will grow, but its renowned spicy bite becomes just a bit too sharp for even the most refined bitter-greens appreciating palate. Molokhia I simply have no experience with and therefore can’t fairly report on its growing prowess because I can never get my hands on any seeds.

Embrace the heat and roll with the waves. You can always grow here, and fiercely, but you can’t always grow the way you thought you might. Simba was supposed to be a king, but then he was a lazy roustabout instead, and then he became a king anyway even though he didn’t want to anymore. Like Mufasa’s face in the stars, so is the majesty of summer food in New Orleans. It ain’t no passing craze.

Questions or news about gardening? Email the Dirt Nerd at Ian@southboundgardens.com