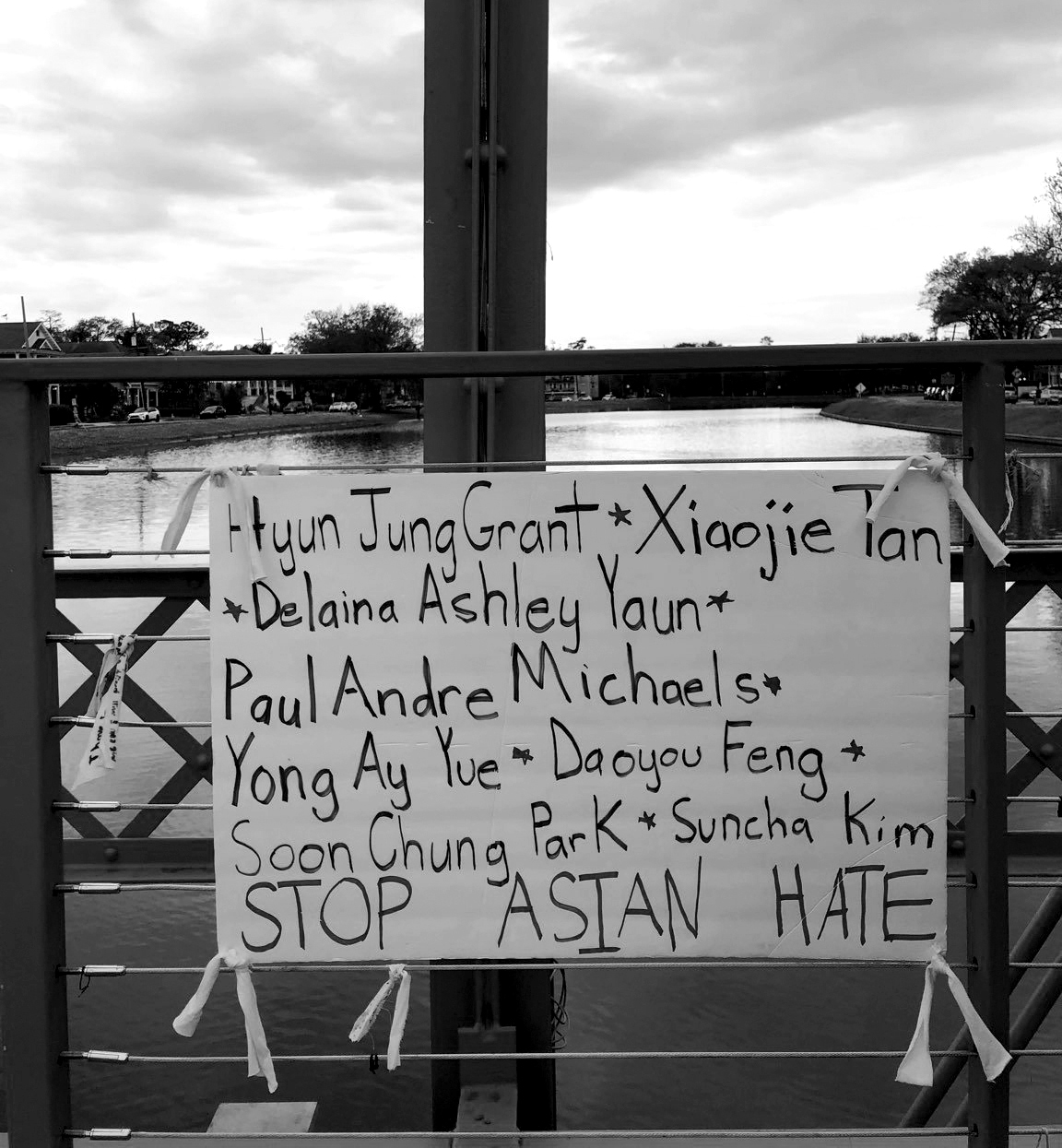 I write to you, readers, as a proud Asian American woman and contributor to the publication you hold in your hands. I write because you must know that I am not alone here and never have been. You are reading this because our editorial team provided this space for me to speak my truth mere days before publication without hesitation. I wept.

Because until this year, I did not believe that I deserved to take up space as a representative of my people—Asian Americans, Koreans, transnational and transracial adoptees, immigrants, and children of nations ravaged by imperialist war—particularly in New Orleans. But on March 16, when a white supremacist terrorist murdered eight people—including six Asian-descended women workers (four Koreans) in three spas and massage parlors in Atlanta, Georgia—I was left with no other choice. Asian Americans are being slaughtered in our workplaces and in our homes. We are under attack in the streets. Our elders are bleeding out on the pavement. Hate crimes against Asian Americans range from harassment to murder and have increased over 150% since the start of the COVID-19 pandemic in the United States. 68% of reported violations are against Asian American women. I see my birth names, my face, my ancestors, and the culmination of many bodily fears in headlines and images.

Anti-Asian racism and hate crimes have a much longer history in the United States and Louisiana, and their toxic tentacles are alive and well in our own city. All too often I am followed by men who roll down car windows and yell “Ni hao!” and “Konnichiwa!” I take a sharp turn in the wrong direction from my house, and an epithet of “Fuck you, chink bitch,” echoes down the street. Men of all ages, races, and political commitments tell me that they have “never been with an Asian woman.” They ask me where I’m really from and if I can speak English. If I snap back, bystanders look at their phones or avert their eyes. These stories are shared by countless other Asian American women in our city. We all know how it feels to put our heads down and keep walking because—according to the model minority stereotype perpetuated by white supremacist capitalist patriarchy—we are the least oppressed. We are privileged. I am wracked with guilt when I stick up for myself, calling myself a bitch or an asshole. We are none of these things.

New Orleanians have an uncanny ability to turn violence committed against people of color into a sick celebration of our “cultural gumbo.” Asian Americans are suffering now and have been for centuries. We are scared, scarred, and enraged. We are being cooked alive in the gumbo pot.

There is a common gesture among New Orleanians. Folks refer to “Your people, over there,” and sweep their arms in the general direction of New Orleans East, home to Village de L’Est, a thriving community founded by Vietnamese immigrants who fled overseas terror inflamed by U.S. military intervention in the 1970s, along with Thai, Laotian, and Cambodian peoples. As early as the 18th century, Filipino men escaped Spanish galleons in Acapulco, Mexico, made their way east to Vera Cruz, then north to Louisiana, and founded villages in today’s St. Bernard Parish. African-descended people and immigrants from the Canary Islands known as Isleños were part of these communities.

In the 19th century, Chinese men known as “coolies” toiled on plantations, in schemes to replace enslaved African and African American people after Emancipation. Historian Moon-Ho Jung (in his book Coolies and Cane: Race, Labor, and Sugar in the Age of Emancipation) explains how “the insatiable global demand for coolies manifested in an upsurge of kidnappings and fraudulent schemes, coercive tactics that drove Chinese residents to equate the trade to ‘pig-dealing.’” Though the Chinese were treated as perpetual foreigners and barred from citizenship, the immigrant uplift narrative has long been manipulated by Southern white landowners and barons of industry to seed intra- and inter-racial divisions. Some Chinese residents became middle-men called “crimps” who brought more Chinese workers to plantations. Under this still brutal labor regime, Chinese and Black workers were forced to compete for jobs. Many Chinese and Black people fled these deplorable conditions and took up work in urban centers, such as factories, run by rich white people in different clothing. In the 20th century, a bustling Chinatown on Tulane Avenue (one of two Chinatowns in New Orleans) was bulldozed to make way for President Roosevelt’s Works Progress Administration projects. We were pushed out by America’s favorite liberal white savior.

So, in fact, Asian-descended people are not “over there.” We have been here, in the thick of it all, for a long time. We comprise hundreds of national origins, ethnic groups, and cultural practices that become condensed into “Your People.” Whether we arrived as refugees of imperialist war, agricultural workers, maroons, families, students, fishermen, shopkeepers, and so many more… we are all “Our People.”

Countless times I’ve felt as if I was slipping off the edge of the world. Clawing and screaming into a void with only the desirability or infantilization of my body to keep me from falling over the edge. Protected because I am doll-like. Seen because I am “exotic.”

Louisiana is slipping off the edge of the world, too. When you’ve lived here long enough, you know that if you’re not careful, the landscape itself can swallow you up. The places that remember you often fall into the wrong hands and then into the Gulf of Mexico.

New Orleans, I would put my body on the line to protect your most vulnerable. Many Asian Americans would do the same to demand an equitable and safe society for all. Will you defend us in the face of danger? Our community is grieving. At the same time, we are fortifying and preparing, but never forgetting. Will you be ready to answer our call?

Top photo: Vigil at the Magnolia Bridge on Bayou St. John on Saturday, March 20 (photo courtesy of the author).