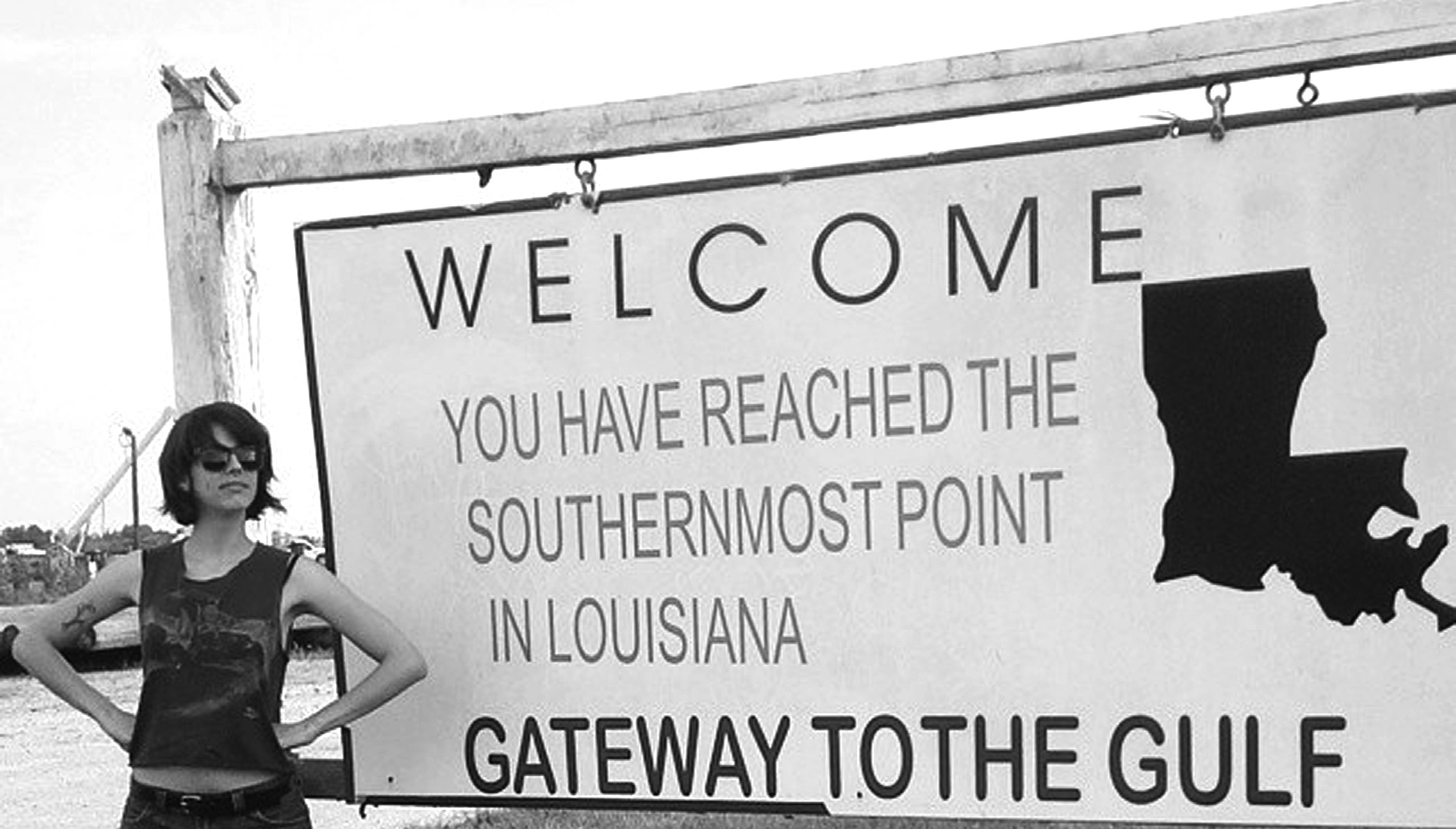 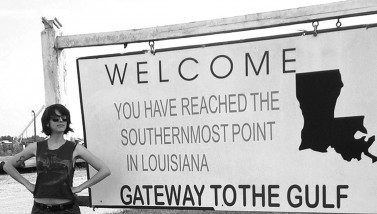 The idea of Louisiana, and the wider south, fascinates me. Geography, history, and contemporary life lie on top of one another, and it is never quite certain which facet you are seeing at a given moment. I drive through this landscape often. I always have. Over the past few years, I’ve been working on a loose mixed media project with my co- collaborator Darin Acosta entitled The Airline is a Very Long Road. It’s intended to be a fractured biography of the state, and is slowly becoming an abstract meditation  on the inputs and outputs of environmental and economic development and decay. The initial phases of research had me digging through archives and collecting bits of history from Louisiana and beyond. In the beginning, Airline functioned as a structure through which I gave myself permission to do whatever research I felt like doing. I tend toward scattered research and get excited about diverse epochs, events, and theories. So Airline became a place where I could explore the relationship between, say, exploitative industries in Louisiana during the Reconstruction era and post-Katrina disaster capitalism in a format that isn’t as restrictive as academia.

But as Airline develops its own aesthetic, many of the things I’ve found don’t quite fit into the project but are still places I’d like to visit—from the grave of Adolf Hitler’s horse to a rinky-dink Britney Spears museum. Over the next few months I will be venturing deep into Parishes far from metro New Orleans, exploring different eras and events that are not commonly talked about, as well as weird contemporary monuments and spaces. 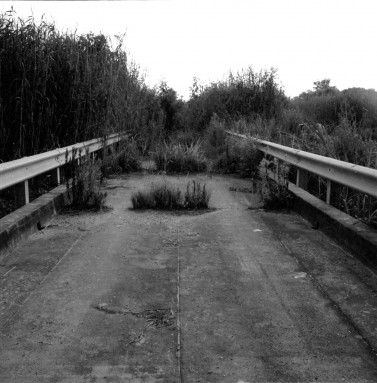 The end of Louisiana isn’t really the end. It is the end of a public access road. Across a narrow stretch of water lies an industrial installation. Small cypress knees dot the horizon. Clumps of marsh squat in the Gulf. The land breaks up, trailing off like clouds. It is a shock to see how much water surrounds the narrow access road, wide shallow expanses of water lapping at the rock edges. The road seems to be the only purpose to the narrow strip of land. All else has fallen away.

Welcome to the end of Louisiana, Plaquemines Parish. It is a straight shot from New Orleans: just get on Highway 90 to Highway 23, towards  Belle Chasse and beyond to Venice. It’s difficult to get lost. Highway 23 runs north-south alongside the west bank of the Mississippi River. There is no place to cross the river. There are not many roads that split off from 23, and the ones that do either double back or end shortly after they begin. Levees hug the sides of the road for much of the drive down Highway 23, so it’s like driving through a tunnel without a ceiling. Suddenly the levees disappear and water and land stretch out together into the distance. 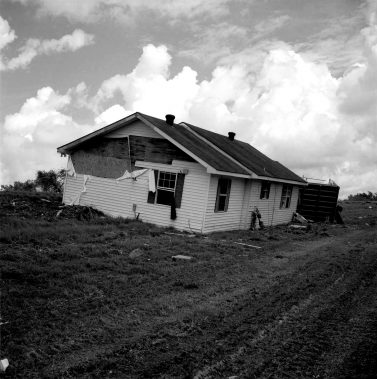 I started visiting Plaquemines Parish on a regular basis right after Hurricane Isaac in 2012. What was a nuisance storm in New Orleans had very different effects on the River Parishes. The storm surge overtopped an 18 mile stretch of levee on the East Bank, sending upwards of twelve feet of water into the woods, marshes, and homes. The force of the water displaced houses into the highway. The levee was smeared with debris from homes, cars, as well as cemeteries—whole crypts had washed onto the banks. The air was heavy with rot and flies.

Although damage from Isaac is still visible, the wide flat fields are clear of debris and the orange groves have returned. Cows meander through pastures. Roadside stands sell fruit and boiled peanuts to passing cars. The pastoral sensation is interrupted every few miles by coal terminals and chemical  plants that tower over the landscape. 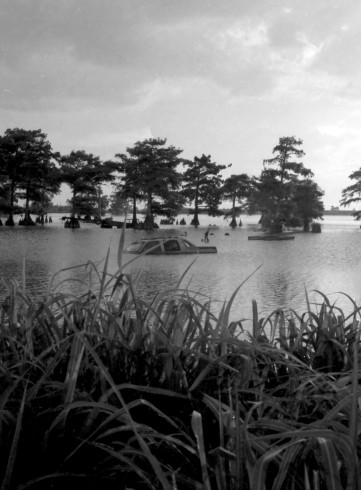 The oil and mineral wealth of the parish is vast. Plaquemines produces the most oil of any parish in Louisiana.  Plaquemines, along with St. Bernard Parish, was once the political domain  of “Judge” Leander Perez—a virulent racist who defrauded millions of dollars of oil revenues from the state.  Perez was an arch-segregationist and was the legal mastermind behind the fight against desegregating schools in New Orleans. His racist language and stances were so extreme that other  politicians—themselves racists—often  distanced themselves from Perez. The Catholic Church excommunicated him. His money and power, however— derived from the development of Plaquemines’ resources—made him an important powerbroker in the state.  Governor Huey P. Long once expressed his desire to cut Plaquemines off from the state and let it drift into the Gulf. Perez’s response was, “I wish you could.” He ruled the parish for 50 years. Eight years after his death in 1969, Plaquemines Parish built him a shrine  on the outskirts of Belle Chasse. The Judge Leander H. Perez Memorial Park contained a replica of his boyhood home and a statue of his likeness. In the 1980s, after his political dynasty fell apart due to familial squabbling and federal investigations, the Plaquemines Parish Council decommissioned the park, turned off the lights and locked the gates.

When a friend and I scaled the fence in 2013, it was completely overgrown. It took 20 minutes of wandering to find the statue. Perez is in mid-stride, mired in a stand of trees with nowhere to go. Someone has cut off his arms. It is a pathetic sight, but also inspiring—so many ghouls from the past are allowed to exist benignly among us, their crimes forgiven through forgetfulness or tepid revisionism. To see a once powerful idol fenced in and left to decay is a reminder that we continually build our historical narratives, and it is possible to reject the influence of such people.