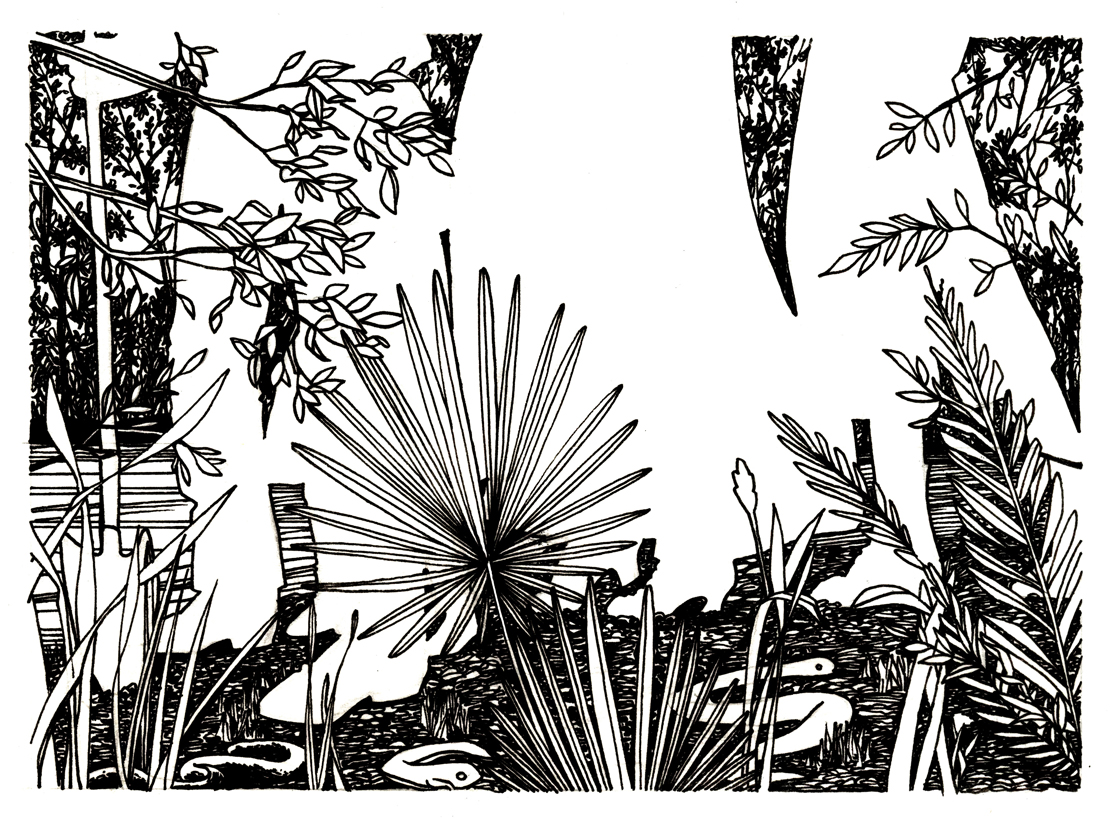 In the summer of 1881, a letter from Louisiana appeared in Ha-Melitz, a Hebrew newspaper printed in the Russian Empire: “Tomorrow on the 21st of August, I and the rest of the men will go forth to our labors and work in the field. The tract of land which was given to us is a distance of four hours from New Orleans by boat on the Mississippi River. There is no winter here. Trees blossom all year round.” It was an unsigned communique from a remote outpost of swampy land in Catahoula Parish. Surrounded by bayous snaking between the Ouachita and Tensas Rivers is Sicily Island, the first Jewish socialist commune established in North America by the Am Olam movement.

Am Olam (“Eternal People”) began in the early 1880s, right as the the Zionist movement towards Jewish settlement in Palestine was also taking shape. Am Olam’s organizers saw an opportunity to move away from the anti-Semitism and rigid social controls placed upon Jews by leaving the Old World for the New. They dreamed of a back-to-theland agrarian socialist existence, where Jews would have political self-determination and control over their lives and property.

Most of the Am Olam colonists were not particularly enthusiastic about relocating to a sub-tropical region; some could not even locate Louisiana on a map.

Am Olam was concentrated in the urban centers of the Pale of Settlement—the western swath of the Russian Empire where Russia’s five million Jews were legally allowed to live. Composed of much of Eastern Europe, the Pale was designed to restrict movement and stunt the social and economic power of Russian Jews. There were laws limiting the number of Jews who could live in urban areas, forcing most of the population into small agrarian towns owned by the nobility, known as shtetls. Quotas were placed on university admission, and there were limits to the number of Jews allowed to practice certain professions, such as medicine and law. The boundaries of the Pale were somewhat elastic; for years at a time Jews could settle in other regions or even cities such as Moscow and St. Petersburg. These periods of liberal acceptance were always subject to change. Waves of anti-Semitism regularly swept across Russia, and Jews were repeatedly and violently purged back into the Pale.

Am Olam organizers were not alone in trying to determine a path forward for self determination. Russia in the mid-19th century was a hotbed of socialist organizing and the Pale was no exception. Russia was the last of the major European powers with a largely feudal society, and Russian feudalism was particularly bleak. Laws dating from the 1600s made serfs the property of the nobility, meaning they could be bought, sold, and traded amongst the nobles. Serfs worked in the fields, in the factory, and were forced into the army. By the mid- 1850s, an estimated 10.5 million serfs were owned by the nobility, and an additional 9 million were owned directly by the state.

Growing unease in the empire led Tsar Alexander II to emancipate the serfs in 1861, with the sentiment that it was “better to liberate the peasants from above” rather than wait for the inevitable uprising from below. But emancipation failed to improve the lives of the millions of Russians stuck in grueling poverty, and by the 1870s both the ruling classes and the intellectual elites were convinced that a revolution was imminent. Radical groups sprung up in many cities, with different organizations advocating for competing revolutionary strategies. While some groups, like Am Olam, believed it was best to seek stability and peace outside of Russia, others focused on socialist study groups and radical newsletters, believing that educating the populace would lead to a widespread demand for socialism. Another faction believed the best way forward was to send organizers into villages to work alongside the proletariat, radicalizing them in the fields and creating a mass movement to topple the nobility.

The most extreme tactics were embraced by the anarchist collective Narodnaya Volya. They called for the dissolution of the Russian state, with all lands to be redistributed to the peasants. Rather than organize the proletariat to overthrow the government, they believed that the fastest way to topple the government was by assassinating Tsar Alexander II. His death would lead to a revolutionary moment when the peasants would realize material change was possible and seize the opportunity to overthrow the state.

In the summer of 1879, Narodnaya Volya formally sentenced Tsar Alexander II to death for crimes against the Russian people, and busily set to work trying to kill him. They derailed trains supposedly carrying the Royal family, tried to sink a boat transporting the Tsar to Odessa, planted bombs in the Winter Palace, and shot at him in the street. In March of 1881, the Tsar was travelling through the streets of St. Petersburg when two members of Narodnaya Volya threw a bomb under his carriage. The Tsar, unharmed, exited the carriage. A third assassin threw another explosive, crying out, “It is too early to thank God!” The Tsar was mortally wounded.

Rather than inspiring a mass uprising against the nobility, the assassination sparked massive blowback against the anarchists. Several members of Narodnaya Volya were captured and executed. The state, facing crisis and instability, made it known that some of the assassins and anarchists were Jewish, hoping to channel the anger towards a familiar scapegoat. As the state began passing anti- Jewish legislation, many socialist organizers employed a horrific tactic to try and redirect the violence for their own political gains. Almost every socialist newspaper printed articles stating that the tide of anger against the Jews indicated that the proletariat was waking up, and that the ensuing pogroms would embolden the proletariat to take action against the state—meaning the violence was a positive step forward for the revolution. “Let us finish off the Jews,” wrote one paper in Odessa, “and then we will revolt against the Russians.”

The rising tide of violence led the organizers of Am Olam to declare that the time to dream about emigration was over; it was now time to leave. For many Jews, the goal of working towards collaborative liberation alongside Ethno-Russians was lost as pogroms swept across the Pale. Lead by Herman Rosenthal, 60 families scraped together $3,000 and set sail for New York City in the spring of 1881. 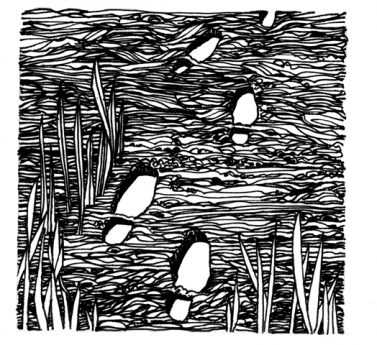 Established Jewish communities in the United States were supportive of Am Olam’s goals. The aspiring colonists received welcome from the Hebrew Immigrant Aid society, who were working to coordinate the resettlement of Jewish refugees across the country. Many prominent Jewish leaders believed that Jewish farming communes would demonstrate that Jews could become the pioneering, rugged individuals that populated the foundational myths of America, thus inoculating Jews from the anti-Semitic stereotypes found in the Old World. Moreover, they were wary that the increasing number of refugees pouring into cities could create negative opinions of Jews, since many of the refugees could not find jobs and relied on charities. The Hebrew Immigrant Aid Society granted the Am Olam arrivals $1,800 and the Alliance Israelite Universelle gifted them another $2,800. With this bit of cash, Am Olam was sent to where land and opportunity seemed to present itself: Louisiana.

Most of the Am Olam colonists were not particularly enthusiastic about relocating to a sub-tropical region; some could not even locate Louisiana on a map. But when the Governor of Louisiana wrote a letter to the Hebrew Immigrant Aid Society offering land in Lafayette Parish to the settlers, it became a much more attractive destination. The Jewish community of New Orleans was eager to help, donating the supplies needed to begin the colony. Once Am Olam arrived in New Orleans, the land promised by the Governor vanished. They were then pressured to accept 2,800 acres in Catahoula Parish, priced at $7 an acre. The colonists accepted. Sicily Island was officially established in December of 1881.

When the colonists set to work, they realized that the land was not worth what they had paid—adjacent tracts were on sale for $1 an acre. Out of the 2,800 acres composing Sicily Island, only 700 uncleared acres were deemed acceptable for farming. Determined, the colonists set to work cutting trees, planting crops, and building houses. As spring turned into summer, the oppressive heat began to take its toll. Malaria ravaged the commune, killing several children. In a letter published in the Russian press in 1882, Sicily Island was described as “a land abounded in swamps and marshes, three days journey from a city with no train service. Eight months out of the year the climate is so hot that the thermometer rises above blood heat during which time there is the stench of the swamps and of the bodies of animals and birds dead from the bites of snakes and scorpions that abound.”

Then came the flood. The surrounding rivers overtopped the levees, and the commune was washed away a mere eight months after its founding. Supporters of the colony, having already donated $75,000 to Sicily Island, did not want to fund rebuilding or relocation costs. Defeated, the colonists scattered. While some returned to New Orleans and some to New York, Herman Rosenthal convinced several families to journey with him to North Dakota to attempt a second commune. By 1885, this commune failed as well. All 26 Am Olam communes across the country were defunct by 1887, most succumbing to insurmountable debts and political infighting. As Russian Jewish refugees continued to stream into the United States seeking a new beginning, charitable organizations like the Hebrew Immigrant Aid Society decided to stop funding agricultural communes. Organizations conceded that achieving assimilation and prosperity for refugees demanded much more support than just funding the initial start up costs of the communes, and there was simply not enough resources to fund the deep work necessary for success. The refugees felt isolated and unwelcome in the areas they settled, and they found it difficult to forge the relationships necessary to succeed in rural communities due to language barriers. Any setback experienced by a commune could prove disastrous, as the residents often were too poor to overcome a bad harvest or broken machinery. By the mid-1880s, Hebrew newspapers in the Pale began running letters from America urging residents not to emigrate, saying that the dream of collective agricultural liberation in the United States was an unattainable fantasy. America was too saturated with refugees, the political and monetary will to support their needs was gone, and immigrants would find themselves trapped in hopeless urban poverty. Either stay in Russia, they cautioned, or find another country to take you in.