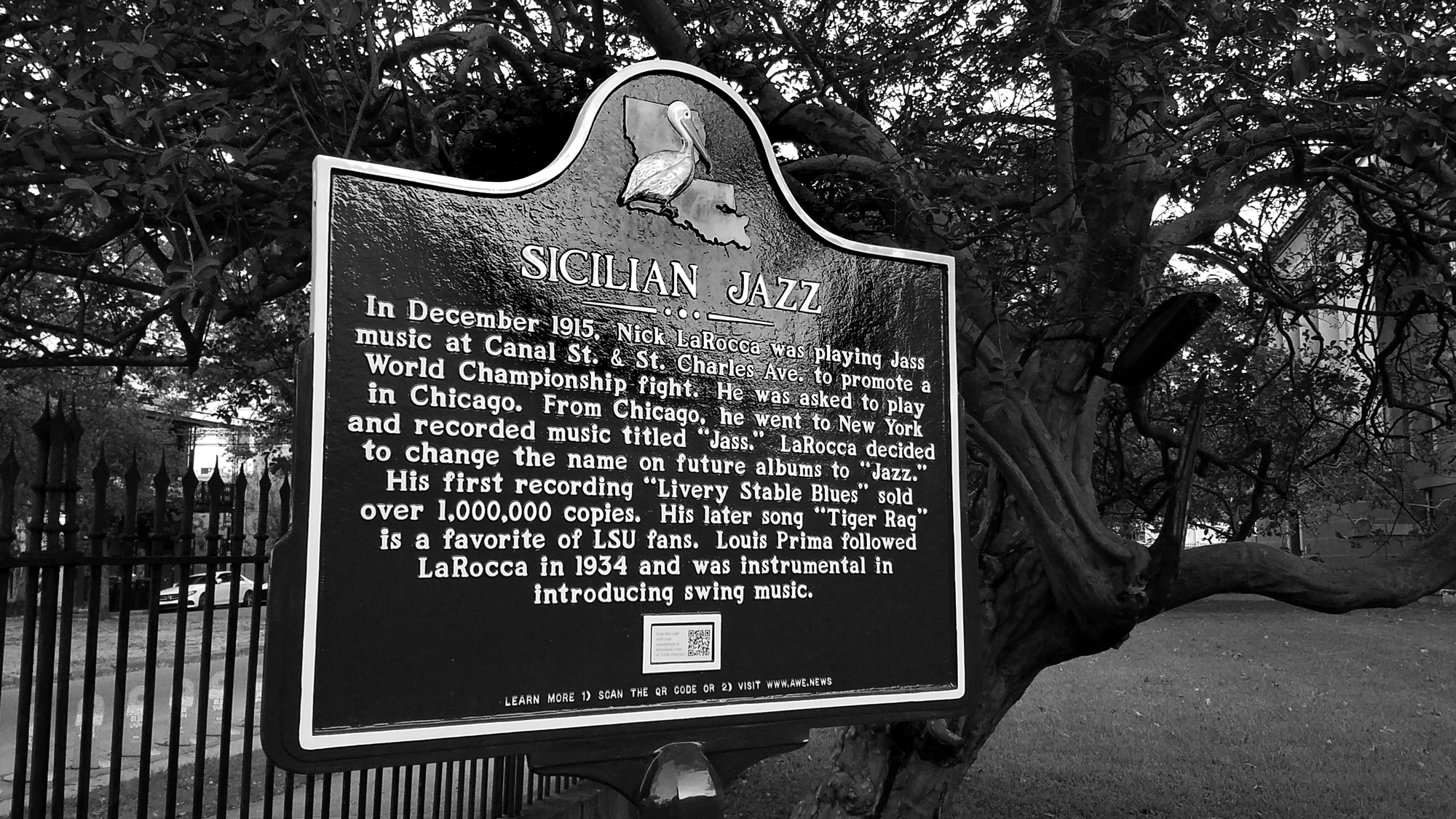 Nick LaRocca, who falsely claimed to be the inventor of Jazz, was a braggart and a racist, having once said his “contention is that the Negroes learned to play this rhythm and music [Jazz] from the whites. The Negro did not play any kind of music equal to white men at any time.” He was also the leader of the Original Dixieland Jazz Band, which is widely considered to have made the first jazz recording, “Livery Stable Blues,” in 1917—a fact that should not be presented apart from the context of LaRocca’s racism and false statements about the origin of the music. Yet, in January 2020, a new State of Louisiana-approved historical marker was erected outside of the U.S. Mint building at the corner of Esplanade and Decatur Streets celebrating “Sicilian Jazz” and prominently featuring the whitewashed LaRocca “creation myth,” but ignoring his racist legacy. That alone should be cause for alarm, particularly as New Orleans—residents and government—works to take down symbols of white supremacy and move closer to telling the full story of its history and people. But it gets much worse.

At the bottom of the marker, one side notes that it was “Sponsored by the Marsala Cultural Fund;” the other encourages you to “learn more” by scanning a QR code to download a “tour of ‘Little Palermo’” or visit the website AWE.news. The Marsala Cultural Fund is run by Charles Marsala, an amateur historian, self-promoter, and one of New Orleans’ most prominent Confederate monument defenders. Marsala was one of the members of Mayor Cantrell’s now defunct all-white “monument advisory committee” and remains a frequent presence at City Council meetings, where he continues to try to push white supremacy-laden myths that Confederate generals were anti-slavery heroes. He also runs several websites and YouTube channels, including the two linked on the plaque: AWE.news (AWE actually stands for Awesome Wildlife Effort, though the website is a catch-all for all of Marsala’s efforts); and, through the app downloaded via QR code, New Orleans Insider Tours (formerly known as SaveNOLAHeritage), which was created to oppose the removal of Confederate monuments and was later repurposed into a tourism campaign.

The New Orleans Insider Tours app (a free download with “in app purchases”) consists of a series of several self-guided tours, each complete with typos, misspellings—enjoy live music on “Frenchman Street”—and incorrect information. Embarrassingly, despite what is presented on the marker, it even incorrectly lists 1919 as the date of LaRocca’s first recording. Many of the tour stops also link to Marsala’s self-produced videos, where his agenda becomes more clear. A stop at the former site of the Battle of Liberty Place monument (built to honor the White League and a frequent site of white supremacist pilgrimage) links to a video where Marsala interviews disgraced former federal prosecutor Sal Perricone about the battle and the monument, which they conclude was about second amendment rights and voter suppression, and “that we don’t really know who is right and who was wrong.” The text at a stop for Gallier Hall ends with the assertion that “the remains of particularly distinguished citizens such as Jefferson Davis and PGT Beauregard lie in state here following their death, as a sign of deep citywide respect;” and a video about Jefferson Davis lauds him for “empowering slaves through education.” Examples of this white supremacist historical revision abound throughout, but nothing stands out more than a stop labeled “Karl Marx’s Day,” which reprints an article from ANTIGRAVITY (without permission) and ends with Marsala editorializing: “Do you think [Mayor Landrieu’s] error was intentional to not connect his monument removal with Karl Marx Day, and the Antifa attack on preservationists. Does May 1, 2017 become a landmark day for the beginning of ‘forcible overthrow of capitalism’ [sic]”. That’s a pretty far cry from the tour of Little Palermo promised on the plaque.

For those interested in sponsoring a state historical marker, the Louisiana Department of Tourism has official guidelines outlining a series of steps, including that “Each proposed marker script shall be reviewed by the administrator of the marker program with the Louisiana Office of Tourism (LOT) and verified and edited by the Louisiana State University (LSU) Department of History and, with the location, shall be approved by the Louisiana Tourism Development Commission (LTDC).” Sponsors must be “authentic historical organizations”—though it is unclear how authenticity is determined—and markers must be uniform in appearance. The process is overseen by the Office of the Lieutenant Governor, who also appoints the entire LTDC. Once approval is granted, the sponsor must pay for the creation of the marker and hold a dedication ceremony. Based on these guidelines, it is unclear why the “Sicilian Jazz” marker was able to include a QR code and advertisements to a personal website and tour app, but it is notable that Lieutenant Governor Billy Nungesser appears in several of Marsala’s videos and tells him he “appreciates all he does for tourism in Louisiana” and that “we are lucky to have him.” Nungesser has also worked with Marsala on a plan to reinstall New Orleans’ Confederate monuments at Houmas House Plantation.

Despite the century between LaRocca and Marsala, in some ways little has changed. There continue to be those who, insecure in their own achievements, attempt to elevate the myth of white supremacy and diminish the experiences and accomplishments of Black, Indigenous, and other populations of color. It’s important to not only call this out when we see it, but also work to end the pathways and systems that conspire to lend these poisoned voices a veneer of authority. It is noteworthy that this particular offense is found on the property of the U.S. Mint, which is owned by the State, and not on property owned by the City of New Orleans, which, at least as of March, had refused further meetings with Marsala. This is increasingly important in light of the Lieutenant Governor’s most recent proposal to wrest control of the French Quarter from New Orleans. Through fits and starts, a more complete history of the city is beginning to be told through public monuments and displays geared towards locals and visitors alike; but if Nungesser is ever successful in asserting greater control over the city, the story of the “Sicilian Jazz” marker and its QR code is a small preview of what we likely have in store. Let’s make sure that doesn’t happen.