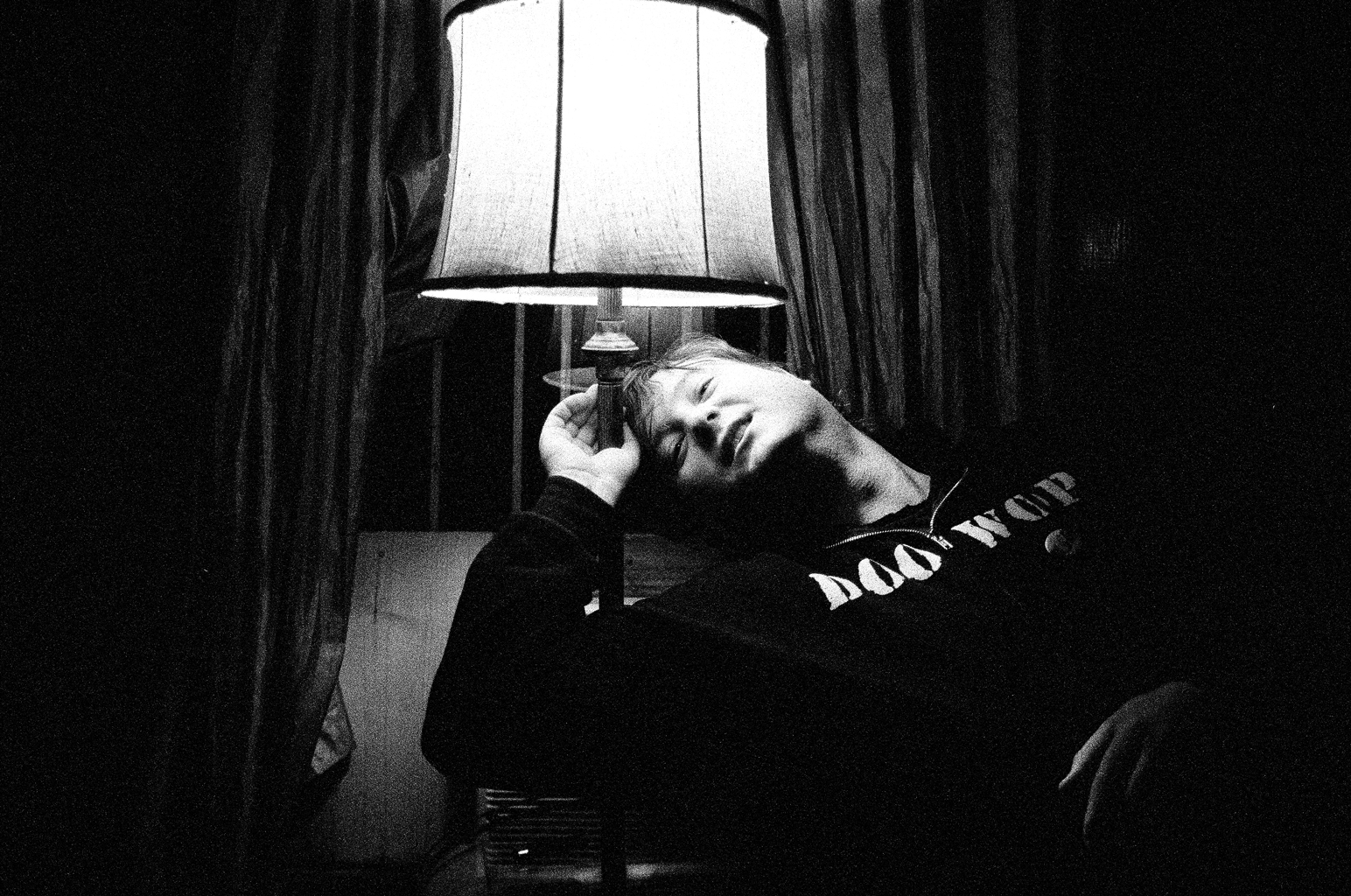 Hello New Orleans! Welcome back to ANTIGRAVITY. We left you at the end of December for an overdue pandemic-and-hurricane-and-every-fucking-thing-else hiatus, but we’re back and ready to roll for you! As it so often is with our little riverside hamlet, we begin this new chapter with equal helpings of rebirth and death by welcoming a blossoming spring, ducking a historically bad tornado, and saying goodbye to a dear friend, Louis Paul “King Louie” Bankston.

If you’ve been a reader since the beginning of this here little rag, you’ll remember that we have covered Louie quite a bit over the years. I know for me as a music writer he was truly my muse, someone whose exploits I followed with great interest ever since my earliest days as a baby punk watching him perform within the dank cinderblock walls of the Abstract Cafe. I’ll never ever forget seeing Gerry and the Bastard Makers, Louie on drums playing with furious abandon, at one point whipping out an inflatable goat and going to town on it, as they say. That’s a moment forever seared into my synapses (and shout out to Dave Martin, whose recent recollection of that episode assured me it was no hallucination!). I know for some of you it can be hard to picture how a moment like that could ever be considered enjoyable, let alone pivotal. But, dear reader, as you know on some level, there are things in this world so vile, so comically putrid, they metamorphose into delicacy: blue cheese, punk rock.

He was already King Louie even way back then, self-professed royalty of Harahan and River Ridge, working at his parents’ Ace Hardware store by day, selling skateboards out of one corner of the shop to kids like me. And though he had the stylings of a classic Hollywood schoolyard bully—complete with sleeveless denim vest and a gravelly voice—he could actually be pretty friendly. In fact, most of the time it seemed like he was just kicking his own ass, either in reality or through any number of exquisitely-penned songs, featuring himself as the jilted lover, or the one who got locked up, or turned state’s witness, or was just simply “talkin’ that trash / got beat up by a girl.”

It was always a blast catching him at the hardware store. One time I stumbled upon Louie and Ira Padnos (the Ponderosa Stomp mastermind) outside the Ace. It tripped me out, two giants and walking encyclopedias of classic rock’n’roll just shooting the shit on an otherwise unsuspecting strip of Jeff Highway in River Ridge. Such an unassuming little spot on the map reminds me of the time I visited the drive-through convenience store in Ferriday which just so happened to be the birthplace of another Louisiana music legend, Jerry Lee Lewis. In other words, that hardware store, to me and many others, is hallowed ground.

Throughout his life, all of Louie’s bands were uniquely excellent (please enjoy longtime Louiephile and former “WTUL Drunk DJ of the Month” Andy Bizer’s “Best Of” later in this issue); and he seemed to play only with the best of the best—evidenced by his pallbearers, who included the remaining Royal Pendletons (Michael Hurtt, Tom Oliver, and Matt Uhlman), Quintron, and longtime bandmates Jason Panzer and Jheri Macgillicuddy (the “Gerry” from up above). But I loved Louie the most as the One Man Band—unfettered, untethered, unhinged. I picked up an early pressing of Chinese Crawfish at Rocks Off on a lark, thinking it would be good for a laugh from the ol’ Clown King. But when the record ended I felt like I had heard damn near a William Faulkner novel, and that album became a staple of those pre-Katrina years, still haunting to this day.

In the immediate aftermath of Katrina, I found myself in Chicago, working out of a weird makeshift porch office, compiling an interview I had conducted with Louie just prior to the storm for ANTIGRAVITY. I often look back on that interview as a moment when my mind, body, and spirit fused with this here publication, as if the mission to document such underappreciated New Orleans genius couldn’t be any clearer—then or now. I am so grateful to have cut my writer-editor-publisher’s teeth with Louie over the years. He could really make me feel all Cameron Crowe-like, often showing up at my doorstep (suddenly and unannounced at times!) to drop off a new record or demo.

Reflecting on his funeral, it doesn’t seem like Louie had any casual acquaintances. Whether through his lyrics or interactions with him, it was easy to feel like he was a close friend, that there were no secrets, even if that meant a lot of ugly truths (and if you ever hear “Rehab Legend,” what I believe to be an as-of-yet unreleased confessional, where Louie over a single deranged guitar track spills his guts, it’ll cut you right to the bone). Love him or hate him, I do believe stories of Louie will keep us warm and animated around the proverbial campfire for decades to come.

For all his rough edges, I’ll remember him most as a writer who could craft the perfect song, something that sounded like a tune you’d known all your life, even if you were only hearing it for the first time. Louie had the ability to reinvent rock’n’roll right before your very eyes. He could make you a believer again. I will miss him so.

I like to think he would be happy to see ANTIGRAVITY resuming publication, and I hope you are too. As we embark on another issue, I’ll leave it to King Louie to impart some advice as we soldier on into what has so far been a very challenging 2022: “Make sure you keep your heads down in them oyster beds, but come up for air every once in a while.” 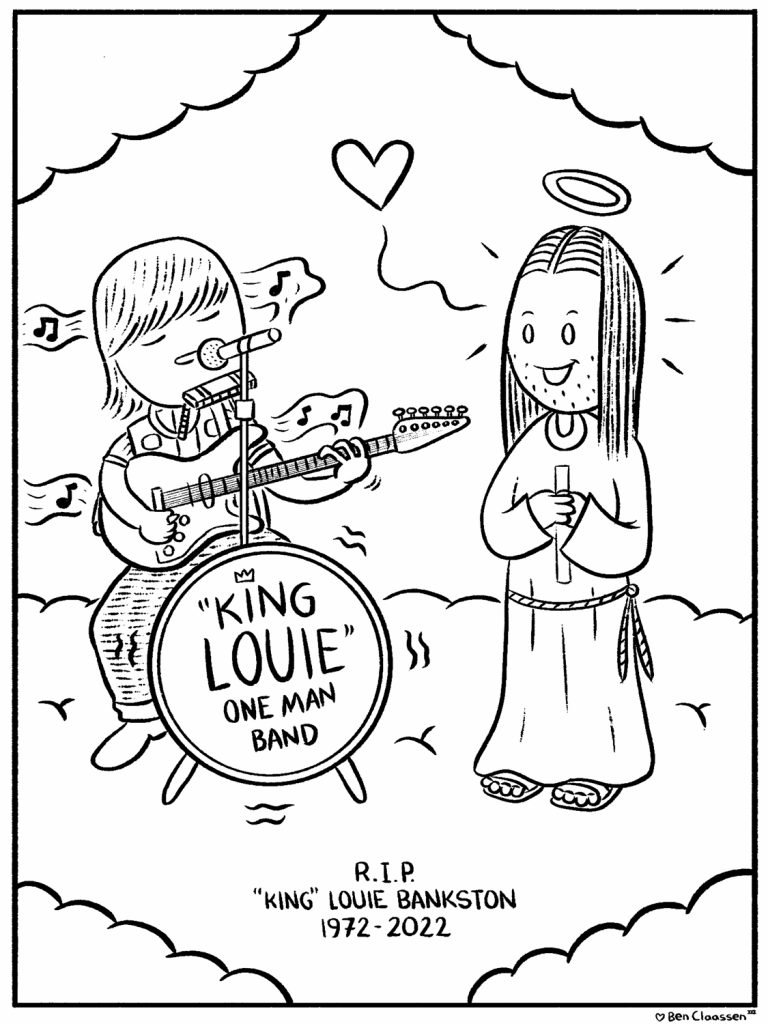 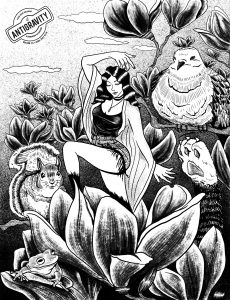