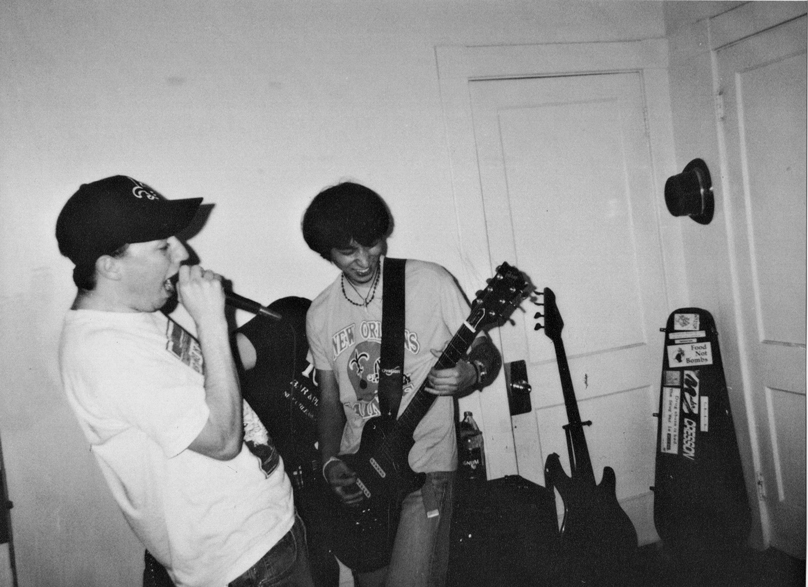 Konnichiwa, ANTIGRAVITEERS! I’m thrilled—and a little bit remorseful—to report that while all of New Orleans was going full arctic blast, Adrienne and I escaped to Japan. Not only did we get to gaze upon the mighty Mount Fuji, stuff ourselves with conveyor belt sushi, and explore just some of the many ancient temples and shrines, but we were also fortunate enough to find a couple of old friends. Early on in our trip, we met up with the infamous Nobu Takatsu, who of all places suggested we meet up at The Mermaid, an Irish pub in the Akasaka district (old habits die hard, I guess, for this favorite Japanese son of the Irish Channel). Some of you may remember Nobu from a certain infamous cover story on Die Rötzz we published about a decade ago, where my attempt to interview the band was hijacked (along with my camera) by Brian Turd (RIP), who found Nobu in the Saint bathroom in a somewhat compromised position and went full paparazzi. Well, I’m happy to report that Nobu seems in good spirits and health these days, and when I posted a pic of us together on Facebook, it was evident that a good chunk of New Orleans still misses him.

Later on in the trip, I was also able to reunite with my longtime pal Koichi Kuriyama. Koichi and I met when we were both students at Loyola, circa 1998. I started off as his part-time English tutor. Koichi was a metalhead so we hit it off, and in a weird twist of fate that feels especially “Naturally N’awlins,” we became roommates soon after (along with my sister-from-another-mister Kelly McGittigan and at least a dozen other supporting players), in a house that would become known as “The Ranch.” Over the course of an endless summer and beyond, we hosted a bunch of shows—everything from hardcore icons Dropdead and Phobia to local Queer legends Ovary Action, and a ton of other bands of all stripes and smells. These were epic times in all of our lives, and though we had to bid adieu to Koichi early on during The Ranch’s reign, we’ve always kept in touch. I’d like to think we blew his mind a little with such American-style shenanigans as hosting full-on punk shows in our living room.

Meeting up with Koichi after 20 years was quite the task, and we were nearly thwarted by the tangled web of Tokyo subway lines (much gratitude to the courteous train attendant who helped us get the right tickets after a minor American-style meltdown from yours truly). Our last night in Tokyo, the four of us (Koichi, Nobu, Adrienne, and myself) were able to come together for a good couple hours in an izakaya for plenty of food and cold Japanese beer. It should be noted that when I asked Koichi and Nobu if they still missed their old stomping grounds, their answers were emphatic and identical: they did indeed miss the city and both still consider New Orleans a second home. What a testament to the power of this city, and the hold it takes on people’s hearts from around the planet.

Our return to the States was a rude awakening, as we trudged, sleep-deprived, through LAX and a customs process that had all the charm and efficiency of a stockyard. I’ll admit to you, dear readers, that our trip to Japan forced a sober reflection on the state of this country. No society is perfect, and I know we had the euphoric haze of travel warming our brains, but still—to watch fields of solar panels whiz by on the Shinkansen, Japan’s ultra-modern bullet train, made me envious of a country that supports things like renewable energy and good, dependable public transportation. And while Japan certainly suffers from a dependency on cell phones much like the rest of the digitized world, you almost never hear one ring—and if you have to talk on it, you find a quiet place, away from the crowd. Respect is an important concept over there, one I’m afraid we are losing our grasp on quite rapidly in this country.

Nevertheless, we made it back just in time to put together this February issue. Many thanks go out to the AG staff and editorial team, who held the fort down while Adrienne and I escaped for a while. You did it again, mighty AG crew, despite the usual assortment of obstacles: everything from busted pipes to kidney stones.

Finally, I’m glad we can give a nod to science fiction guru Ursula K. Le Guin at the end of this issue. I admit I only read one or two of her novels, but the impact was profound. Towards the top of the ANTIGRAVITY Style Guide sits a quote of hers, taken from The Left Hand of Darkness and paraphrased to reflect not just the novelist’s dilemma, but the task facing writers of all genres. It goes like this: The artist deals with what cannot be said in words. The writer does this in words. In the following pages of this and every issue, you will find an army of writers who, to this editor’s grateful soul at least, met that challenge.

Happy Mardi Gras, everyone. Stay safe out there.