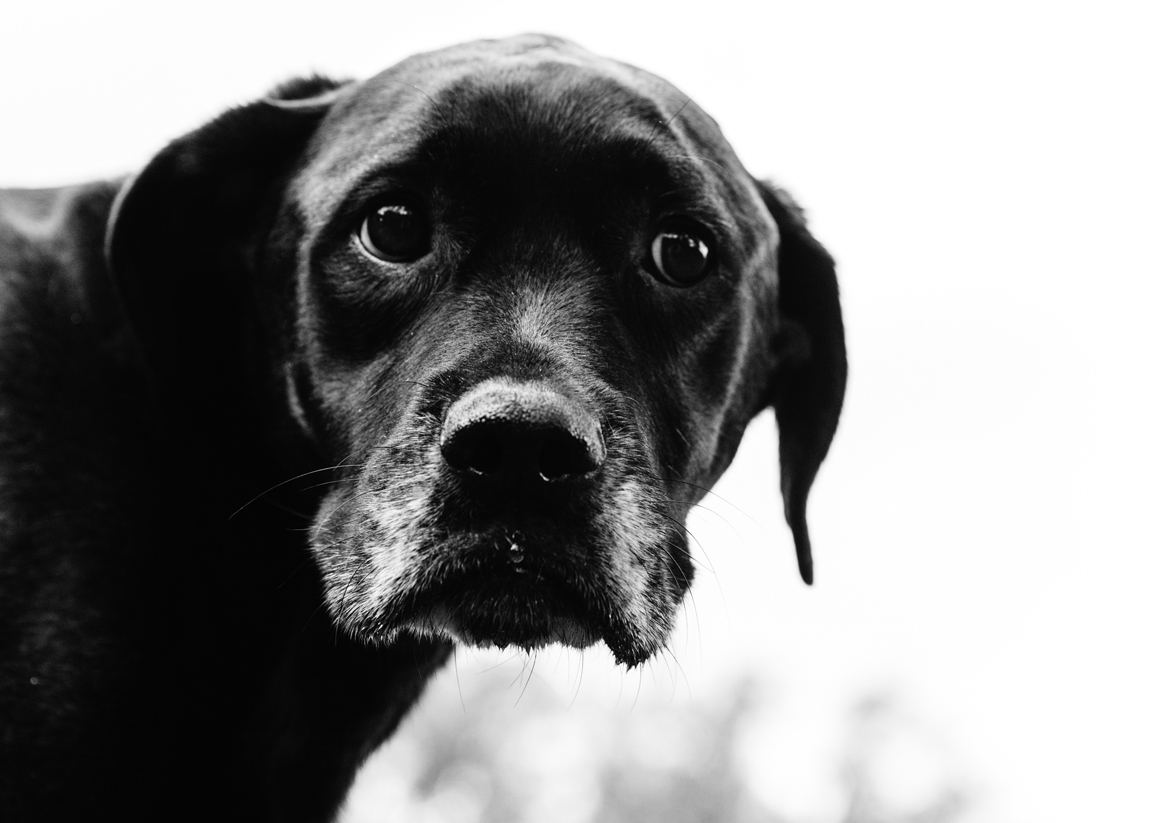 The ANTIGRAVITY family lost a dear companion and unofficial mascot last month: Chloe Fox. Not only did her likeness sneak onto a few covers over the years, but there was always that point in the night where the human team of the AG staff would inevitably peel away, leaving just Chloe and me, riding that overnight express to deadline.

A decade ago, I got a call from my friend Leonard; we were both working around town. He had been driving down Chartres Street in the Bywater, when he spotted a dog chained to a fence outside a blighted property, clearly abandoned and left to her own devices. He called me up to let me know about the rescue-in-progress. When I showed up, he had coaxed her out and unhooked the leash from the fence. Since Leonard already had two dogs, I offered to take the mutt—not sure for what purpose or plan, though. At that age, I didn’t exactly have a reserve of responsibility or extra income. She was skinny with a big head, lanky paws, and short black fur, except for a white patch on her chest that made it look like she was wearing a suit. Best guesses were pit, lab, and boxer mix—somewhere past puppy stage but not quite a full adult yet (like me!).

I led her to my van, where she hopped in, stared at me for a moment, then broke open a dog smile. There was no more question where she was headed: back to my house and by my side for the next decade. She was a shapeshifter, at any moment resembling a bat, a monkey, a horse, or an otter (when she was in the water). Chloe loved to swim. That calm inlet on the Mississippi, right over the levee in Riverbend, was her favorite spot. Over time, she gained a lot of nicknames: Bananas, Beans, Bobo, Bear, Banana-Bear, Bobo-Beans, Banana-Bear-Bobo-Beans, and so on. I know for some of you this kind of cloying talk is a little unbearable; but to those of you who share an affinity for your pet companions, I’m sure you sound pretty much the same way.

The relatively short age of pets define eras of our lives. Chloe was with me through several stages of personal evolution, from my late 20s—not my best years—to almost 40. Through these stages—multiple roommates, other pets, exes, homes, and youth’s random chaos—she stuck by me, always thrilled at my return, and always keeping a watchful eye. Jeff Garlin’s character in Curb Your Enthusiasm put it best: “When everybody hates me, my dog loves me.”

She was there for my first date with Adrienne. As we Netflix’ed and chilled, Chloe was like a chaperone, making sure this lady was up to snuff and worthy of her human charge. By the time Adrienne and I were married, three years later, Chloe was the elder of our home, a stern grandmother figure—and she knew it. Some dogs beg, but Chloe demanded: breakfast, attention, treats, whatever. She would growl, dance, shake her head at the treat jar, or most effectively, stare at us with her signature gaze: deep, penetrating, soulful. (Another nickname we had for her: Meryl Streep.)

Dogs are simple, efficient biological machines, which aids them greatly through life, until one part starts to go wrong. Things go downhill fast after that. For the last year of her life, Chloe was plagued with a growing stomach tumor. The weekend before our wedding, last November, felt like Chloe’s last. We even made a final appointment for that Monday. But she rallied, stubborn old mule that she was, and kept on for another ten months, mostly happy and as bossy as ever, even as that tumor grew and grew. It finally got the best of her last month and we had to say goodbye.

It feels a little odd to share this with you, dear readers—a little selfish even—as bigger tragedies unfold daily. And let’s face it: people are losing pets and loved ones every day. But this is just not the month for the pleasantries of normal editorial blather from me (though this is a great issue and I hope you enjoy it).

There’s just something about the relationship with our pets. We speak to each other through a primordial frequency, free of the clutter, lies, and shortcomings of human-to-human transaction; and it’s been this way since the beginning. Thousands of years of evolution, and dogs remain to this day our ultimate protectors and companions. Chloe performed her canine duties with the utmost dedication. She will be missed greatly.