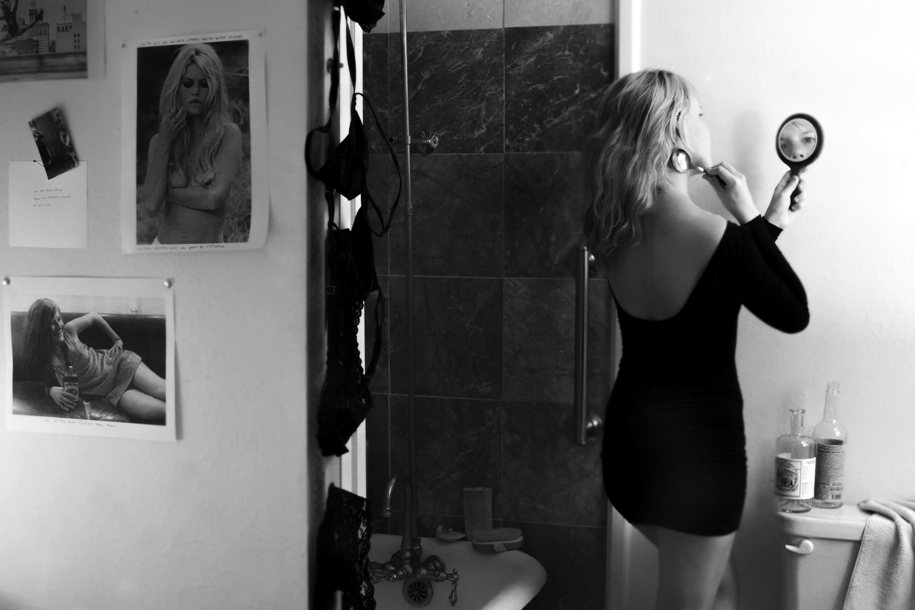 “Your kindness might be the difference between life and death for someone. Realize the impact of your words. The truth is, in one way or another we are all extras girls.” —Chase Kelly, Survive the Club (survivetheclub.com)

From the two-top by the window, I swirl cream into my coffee as she closes her front door and crosses the street. My friend lives kitty-corner from the diner, and I usually text her when I find myself here alone. Today, I’m in a white, men’s extra-small oxford, that I wear as my work uniform over lingerie. I’ve buttoned it up high, but not too high, so that it doesn’t seem like I’m trying to hide anything. It does. She takes the seat across from me and makes a gesture, hands closing around a throat. I hope it’s alright; as a friend, I feel I should ask. Are you OK? I open the top button and show her. I know, it looks worse than it is. It’s a work thing. I realize this fails to explain anything at all.

Louella had just sold a champagne room. The guy has a friend along with him, so Louella pulls me in, too. The waitress pops open the champagne bottle, sets down a round of vodka (soda water for me, still water with a lemon for her, red bull for them) and slides the door shut. The friend starts trying to kiss every single part of my face. Why can’t I kiss you… why not, why… I graze the air near his cheek. Not like that, a real one. I reach for the bottle. What’s a real kiss? I refill my champagne flute and splash a little into his. French.

I feel like the cartoon cat, caught in the arms of the skunk. There are several iterations of this set-up: her ill-begotten white stripe has got him mistaking her for someone else. She’s become the finish line of a long chase, and now he’s closing in. They are on a chaise lounge, the background sketched in hearts. She tries to slip out of her mistaken identity (cat! not a belle-femme lady-skunk!) but her every effort to pull away ratchets her in tighter.

I twist towards the other couch, where Louella deflects the guy’s hand from her g-string. That kind of stuff is extra. We’re not extras girls. I have an idea. Let’s switch! She nods, he shakes his head. I turn back to the friend. You want to switch? No. I have another idea. Let’s play a game. Try giving me a hickey. Do you remember how? Not like that, a real one! Before I know it, he’s giggling into my neck like a teenager. I reach around the shoulder of the sofa and check my watch.

Louella and I are the last to leave the club. Thanks for bringing me in. We peek out between the double doors. Sure… they were awful, huh? She turns down Bourbon. My cab waits up the street, beyond the metal stanchions that separate the vehicles from the vanished pedestrians. The street-sweeping machines are out, steam-cleaning the night. In an hour, it will be daylight and crowding up again.

I pass an alcove where two men crouch. A woman is asleep in the threshold. They keep trying to wake her by putting a damp, rolled cigarette in her mouth. Hey! Hi! What’s happening? I push myself between them. Oh there you are! I pretend to know her. Hey girl we gotta go! OK guys, we’re going home, our cab is here. Thanks, nope, no cigarettes…

What’s your name? We tack our way across Bourbon with my arm around her waist and hers over my shoulder. Erica, she says, barely. She’s about my age, in black jeans and a black tank top, her hair dyed black. Her skin is very white and adorned with cheerful flash tattoos. She starts falling into another alcove, unbuckles her belt, and squats. My body blocks hers while pee rivulets over the sidewalk.

From the cab, I text the only person I know will be awake at this hour. Come by. JD is out with a friend after work, someone from out of town. Bring whoever. We can have a sleepover. My apartment is tiny—a mess with a bed in the center. I tuck her in, turn the burners on the stove, open a can, put a couple of spoons in the freezer. I am trying to be quiet but keep clanking things around.

I click open the automatic gate to the patio and wait out on the steps. The sky glows purple from the billboard that’s gone unchanged for the three months I’ve lived in this apartment. It shows a bottle of vodka with a Soviet palace on it, beside a splashy, tilted cocktail. It reads HOW WE PARTY, but the Y is obscured by the roofline of a blighted house.

We brought you these—JD pulls a beer from its plastic yoke and cracks it for me. I shush him. She’s sleeping. I put a plate of tacos in front of them. The food is burnt and I’m the only one who’s hungry. Is it too much that we’re here? He asks, gently. No, no. I want you here. Work was long, that’s all. JD’s friend is visiting from Canada. I tell her I’ve heard that the strippers there put paper cups between their open legs, on stage, and have customers play spare-change coin-toss with “loonies” and “toonies.” She laughs but doesn’t confirm this. In the bed, Erica breathes lightly. We make a heap of blankets on the floor. I’ll be there in a minute.

I take a spoon from the freezer and rub it on my neck, a folk remedy for under-eye circles and passion bites. In the freezer, I keep a bottle of “emergency vodka,” though what constitutes a state of emergency continues to change. A hurricane would be an emergency. Is a storm an emergency? Another power outage? Another night with friends? Strangers?

Were those her friends, or strangers? Did I misjudge? Because I raced to the bottom of a champagne bottle? Isn’t that what alcohol does, impair judgment? Have I bruised my own sense of discernment?

At dawn, Erica sits up with a long, low moan, and reaches for the glass of water I’d put on the nightstand. The interior dimension of her upper arm is a tattoo, a syringe with red blood drops shooting out, edged in black. On her wrist is a hospital bracelet. Her pockets are full of objects. Her heavy black shoulder-bag is beside her on the floor. These details hadn’t adhered to me the night before. She asks, before anything, where the nearest corner store is. She is going to get vodka. Asks us if we want something. She is cold, although the weather isn’t. I hold out my jacket.

We take turns showering. When JD’s friend goes into the bathroom, we hear her crying. He tells me that in Canada, she works at a harm reduction clinic that dispenses one shot of liquor per hour to people who are past rehab, past detox. On my bathroom wall there’s a photocopy of that picture of Janis Joplin, in the 27th, final year of her life. She reclines on a couch, her hand around the neck of a liquor bottle. “It’s all the same fuckin’ day, man…”

Erica returns, offers us each a pull from her bottle in a paper bag. I say I have to be somewhere, pile them into my car and drop the others off. Where can I take you? I turn to Erica. I want to go back to Grace House. I pull out my phone to look it up. No, I have to wait. I have to be sober. Her story emerges as I drive towards the Quarter. She’d passed out, found herself in the hospital on a fluid drip, got let out, went out drinking, passed out again. She was here during Katrina. She was in an attic, with family, in a house that took on 16 feet. She withdrew from heroin while surrounded by water. It took weeks for anyone to check on them. The first people to approach were sheriffs, who gave them permission to shoot anyone they saw, then left.

I had been doing better, before. Her eyes well up. She had held a job, before, been through Grace House, before. Can you take me there? When I’m sober. She doesn’t have a phone. I tear a piece of paper off the liquor bag and write my number on it. Call me. She puts it in the pocket of the coat and gets out on Frenchmen. Call me.

I don’t know where to go so I start driving into the Marigny. A block from the diner, I have to pull over. JD’s friend must have been absolutely sure of something that I had only understood obliquely. I start to cry. Extras are another word for something. All the somethings. Anything beyond one’s limits. Why does it take so much to say, you have me confused with someone else— someone who does things I don’t. Don’t. Won’t. Wouldn’t. In theory. In theory, we are independent, we determine our parameters and assert them without question. In theory. In practice: One day at a time. One and the same fucking day at a time.