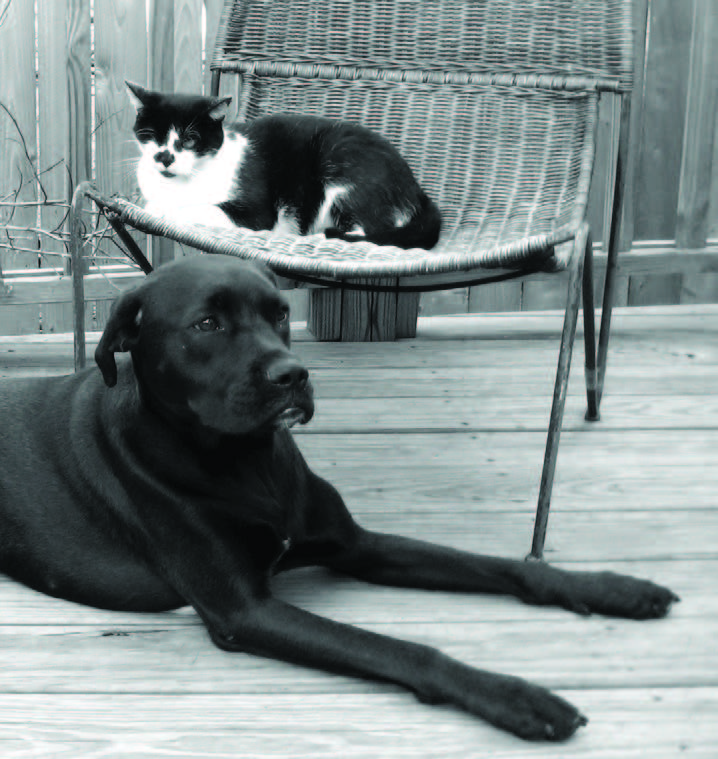 One thing was certain: the raccoons living under my house and in the backyard tree were not friends with the cats in the neighborhood. One night, in the early morning hours while I was up with a bout of insomnia, I heard the terrifying screams of raccoons and cats as they fought underneath my raised house—obvious territorialism fueling hatred and murder. But at times, different species of animals adore (or at least tolerate) each other. We have all heard the stories of cats and dogs getting along unexpectedly, but how about chickens and cats, ducks and chihuahuas, or cheetahs and dogs?

Moving into a house in Mid-City right off of Orleans and Carrollton a few years ago, Heather Mack discovered that her backyard got the hands-down best afternoon sun. A neighbor’s large colony of outside cats—a dozen or so—unearthed the same thing and took to sunny afternoon naps in Mack’s backyard. When Mack adopted some chickens, after a short adjustment period (for the cats), the cats started reconvening in the yard, resulting in an interspecies naptime in the backyard sun. Remember Matt Toups from last December’s column? A New Orleans resident and member of Slow Danger Brass Band, Toups witnessed his hens mothering a baby kitten.

In St. Rose, Louisiana, a grandfather brought a baby duck, later named “Duckie,” home for his toddler granddaughter. Duckie grew at an alarming rate. For animal siblings, the duck claimed the chihuahua clan in the grandfather’s home. Duckie chased one chihuahua around, who clearly felt threatened and began nipping at the duck. Duckie stopped trying to play with the little dog after the warning bites, but he had better luck with the other chihuahua, a miniscule applehead. The two largely ignored each other but they slept in the same room at night with no problems.

On a larger scale, the San Diego Zoo has the “Animal Ambassador” program, where they introduced a 6 month-old shelter pup to a 3 month-old cheetah. The canine and feline became companions, resulting in a calmer wild cat and a liberating environment for the dog. The driving force between this pairing (and others like it at the zoo) is that the animals involved in this program are trained and used in presentations at off-site events. Additionally, protecting dwindling numbers of wild cats, such as cheetahs, calls for obvious human interference, which in turn demands a calmer wild cat. This pairing unquestionably provides the necessary tranquility for training and species survival.

What can we take away from these stories? On the one hand, we can acknowledge that animals coexist and feel. Dogs and cats (more so than other animals) have been bred for many reasons over the centuries, but one of the main reasons is for human companionship. With each decade of breeding, dogs in particular become more of a human’s best friend, their wildness increasingly waning from them. By the historical and possibly cruel force to civilize animals, our anthropomorphizing of them suddenly does not seem so far-fetched: the sheer shift in behavior when calmed (or threatened) reveals telling truths about the emotional capacity of many animals. On the other hand, we can accept (and maybe even emotionally capitalize off of their dedication and adoration) animals in their current state: many of them domesticated, evolved to be human companions and in need of care and environmental stability. This could very well include interspecies relationships, and for that, we can prepare.

When bringing home an animal of a species different from whatever animal(s) already live in your home, always introduce the new animal to your already existing animal in its comfortable environment. For example, let’s talk about cats and dogs— the most common. If you are bringing a dog into your feline-dominated home, keep your dog on the leash or crate, so that your cat(s) can roam the house and check out the altered situation (this is especially true for cats, who do not like change one bit). The order of introduction helps, although does not guarantee, that your pets will know who reigns the house. At first, it is beneficial to allow your already existing pet to feel like he or she has control. This is especially important regarding the meeting of a canine with prey drive (such as many terriers) and a cat.

With other species, controlled meetings is just as important. In addition to controlled introductions and subsequent interactions, you can train whichever animal is most trainable (i.e. if you have a dog and geckos, try training the dogs, not the geckos). Also, if your new animal attempts to play in a manner that your other animal does not condone, do not correct your other animal—correct your new animal’s behavior. You will have to use discretion in your own situation as all animal relationships, including the initial meeting, will differ. For many animals, keeping them as separated as possible ends up being the only option; my one cat feels extremely threatened by my dog, so a baby gate secures her in the back of the house while the pooch (when not crated) has free roam around the front of the house. Some animals are simply going to hate each other. Just like humanity, there will be plenty of enemies, but hopefully, there will be more friends.