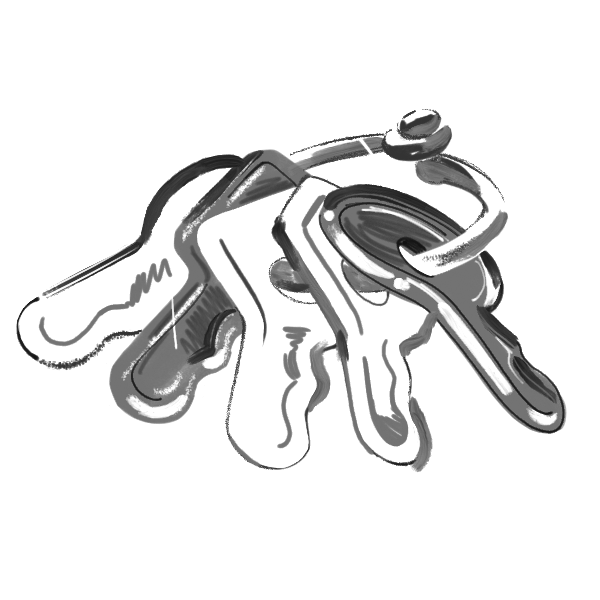 Dan Fox and I have been friends for at least 12 years. When the baby arrived before he could write his own bio for this, I didn’t know where to begin. So I did what any savvy millennial would: I crowdsourced. Thank you Bryan, Eddie, Eric, and Lauren for helping me describe the guy who has helmed ANTIGRAVITY Magazine for the past decade. Don’t worry, he kept his day job—a proud member of IATSE Local 478, Dan has had a long career in the film industry, right at the bottom of the heap (“those who cannot act, set dress”). You may know him from all the bands he’s played in: Indignation, Hatchback, Gretna Sewing Circle, The Interview, Lovey Dovies, Stupid Fucking White Man, and Big Baby. Or you may recognize him from his many long graceless hours of shuffling behind the counter at Stein’s, back bent in dutiful servitude. When he’s not working, this aloof Gemini loves playing with his dogs and tending to his apiary, Pho Tau Bee. A lifelong resident of New Orleans, graduate of NOCCA and Loyola, Dan made the “very adult” decision to move to Gretna, where he resides with our lovely and talented photo editor Adrienne Battistella, his wife and companion in parenthood.

TOUR LESSONS TO TAKE INTO FATHERHOOD

About a decade and what feels like half a dozen lifetimes ago, I was in a band called the Lovey Dovies, a loud and fast rock trio who embarked on a handful of coast-spanning tours in my 2007 Dodge minivan. Because there were only three of us, we were able to pack everything this way: there was the driver and passenger up front of course, and then right behind the driver we had a third seat. Every other cubic inch of space was filled with amps and cabinets, drums and hardware, guitars, merch bins, and luggage. That third seat became a dark little nook, equally comforting—not a bad little uterine pocket to recover from the previous night’s excesses—and claustrophobic, as we all smoked cigarettes all the time. Hence, we lovingly named that third seat “The Hole,” as in, “Somebody else drive. I’m taking The Hole.”

So it was like an old friend had come for a surprise visit when I found myself, lo these many years and a few different models of minivan later, tightening the straps on a Graco infant car seat, in that same position: The Hole.

As my wife, Adrienne, and I prepare for the arrival of our first child (I expect her to walk in any minute now and declare that it’s happening), I can’t help but recall fondly a lot of moments I had through half a decade of touring—first with the Dovies, and then later with stoner-dads Suplecs and the new-Americana group Hurray For The Riff Raff—that have prepared me, as best it ever could, for imminent fatherhood. (And if you think this will be a thousand-word bit on how musicians are like babies, no! While the limits of my sanity were certainly tested on myriad occasions, this is not that piece.)

Around the time of the Dovies’ demise, I was asked by Suplecs to help them manage an East Coast-Midwest tour. At the time it seemed like a great excuse to get out of town, and was the first time I’d be in a support role. They had a legit van, your classic Ford Econoline, and I remember a strange sense of possession taking over me whenever I would get behind the wheel of that beast and take the highway. Like a lot of you, I don’t consider myself necessarily a reckless driver, but you know how it is: we all get distracted from time to time with the phone or a billboard, speed up to make a yellow light, or boil over with gridlock road-rage.

Driving for Suplecs, though, I cultivated a Zen approach, adopting that classic pilot’s mantra, “souls on board.” And that’s how it felt with Suplecs, and later on as tour support for Hurray. When I got behind the wheel (which was often, because as support that is one responsibility you should always try to relieve the talent of), I became a different person, never looking at my phone, always yielding, and taking it slow and steady over what Johnny Cash referred to once as the “concrete sea.” With the life of my newborn son in tow, I hope I keep this same spirit, whether behind the wheel or otherwise.

Packing several bodies into a metal can and hurtling it down the highway at 80 miles an hour, down thousands of miles of interstate, is no casual exercise. We’ve all heard the stories of fiery wrecks on the highway, sometimes lethal, sometimes exceedingly close. And that’s just the highway! With touring comes not only the perils of normal travel, but the excesses of rock’n’roll, which could be anything from overdoses to sexual assault, fans with boundary issues, remote hotels in strange parts of town, break-ins, and so on. As I became a full-time tour manager with Hurray, I found myself imagining—damn near hallucinating—vivid scenarios in which the band and I met various combinations of dark fates, possibly due to some negligence or missed detail on my part. These scenes weren’t so much haunting, but rather acted as a furnace for driving decisions about everything from routes to constant van maintenance to strategic pit stops. And it wasn’t exactly fear or paranoia—these unprompted visions were not debilitating; after all, we did the damn thing for weeks at a time. But these nightmarish visions did give me a situational awareness that kept me vigilant.

As a soon-to-be new parent, I’ve already been visited by a lifetime’s worth of horrible scenarios, from the obstacles a fetus must overcome just to survive early development to the daily demise we all face on the outside. Like my tour days, I just hope these kinds of near-hallucinations serve more as a source of inspiration, and not a retreat into overprotective parenting or fear that backfires. But it is always helpful to be aware of the stakes, and to meet them with the respect they deserve.

As Adrienne and I prepare for the trip to the hospital, going over the suitcases and bags feels like fulfilling some kind of surreal rider. In addition to the few sets of clothes we’re bringing, there are the pillows and massagers, essential oils, warmers, a battery fan, dry snacks and low-sugar ginger ales, Tums (sooo many Tums!), and of course bananas (labor and tour—bananas are essential for both!). When all this stuff moves, it will have to move fast, and I really don’t want to leave anything behind. But however much gear there might be, I know I can condense it down into a number of bags I can count on two hands. Hopefully I won’t have to think about it very much, if at all. Many a late night clearing out of strange clubs (and early morning hotel roundups) has made this process easy for us. I’m grateful for the practice and devotion to the dark art of logistics those years on the road gave me.

Waiting in the Wings

Tour could be maddening, of course. You start feeling like your time doesn’t belong to you, as there’s always somewhere else to be that’s not where you are. Tour is demanding and challenging. It can create psychic quakes in your brain that make you question the life decisions that led you to be eating a soggy Starbucks breakfast sandwich at seven in the morning in bumfuck Indiana, in a van full of people you may love or hate, but either way you can’t escape. In other words: family. But for me, the worst day on tour was still often more satisfying and enriching than a lot of days at home. Whatever minor annoyances or grievances the day held would always melt away when the lights went down and that first chord was struck. And my vantage point, usually just off stage or behind it, felt like such a privileged spot to experience a show. There’s something magical about contributing one small part to something so much bigger and deeper, and stretching back farther than your own mere existence.

With my son’s imminent arrival, I’m ready to take this same position, in the wings, on the sideline, as support—with all the limitations that come along with that role—for the art of his life, whether he chooses music or dance or accounting or dishwashing. For all the fun and glory I’ve had in my life, I’m really looking forward to being an entry in my kid’s liner notes. 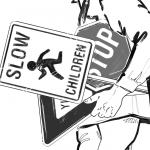