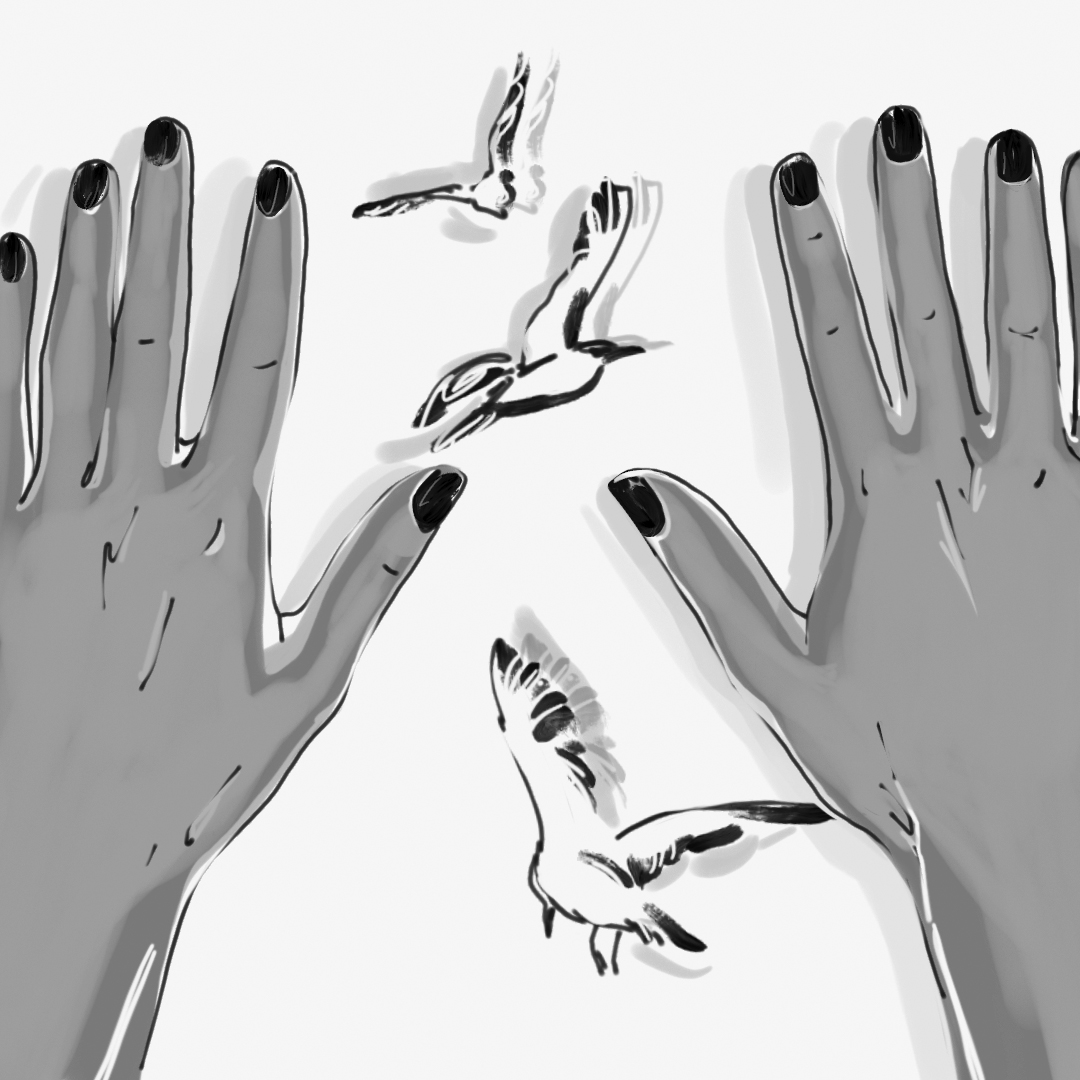 Steph Visco (she/they) is a writer of journals, love notes, and weird little lists who lives in the 7th Ward of New Orleans. They came of age in Philadelphia and though they have lived here for 10 years and will never leave, they still say “bagel” like they have a mouth full of marbles. Steph is lucky enough to have their dream job as birth worker, Financial Officer, and Member-Owner with Birthmark Doula Collective (the only worker-owned doula cooperative in Louisiana); their work includes birth justice advocacy and disrupting the barriers that prevent people from birthing and parenting safely and joyfully. Steph spends most of their free time looking for cool rocks with their two-year-old, Max, drinking coffee and gossiping with their partner, Scott, and sitting by the river with a bunch of delightful humans who make up their expansive family of sisters, aunts, neighbors, and friends, without whom parenting would be a lot less possible.

PSALM TO THE SELF

My greatest fear about becoming a parent was that sleep would elude me for the rest of my life. I have never been an early riser; I enjoy an awakening stretched over hours and pushed up against the precipice of the afternoon. Sleep is a holy prayer I say to myself alone. But Max recalibrated my internal compass, as babies tend to do.

It’s not that I suddenly prefer waking early, but rather I have surrendered to the fact that I have no choice in the matter. And as much as I once mourned the loss of naps, Max arrived and took my mourning in a clammy hand, mashing it between fat fingers. For the past two years, I’ve spent my first few moments of waking life wrestling with a dervish of elbows and toes in a tug-of-war over my breasts. It is chaotic, it is gleeful, it is uncomfortable, and it challenges every fiber of who I thought I was.

My Body, Not My Body

When Max wakes yowling, “MA-DA, MA-DA, OUT,” either my partner or I will fetch them from their room. Max is eager to greet the day together, in the very bed where our new lives began: in the warmth of pillows and limbs that have remained a mooring for our family through the sea change of the past year. We hide under the covers, morning breath co-mingling, and shriek at each other.

Max is capable of a clarity of expression that is unrivaled. Unburdened by words or constructs of time, they are able to communicate their hierarchy of needs with the resonance and measure of a timpani roll. Max finds my attention as soon as they need it, manually turning my head with their hands, mashing gooey nostrils up against my cheek, and yelling my name directly into my own mouth. Breath cool, smelling of yogurt. They need me, often, and they tell me, explicitly.

This physical struggle is bearable because I trust Max, and Max trusts me, in a way that is patient and uncompromising. Since birth, they have recognized my body as an extension of their own, and I have had to learn how to ask for it back. This has been surprisingly difficult to explain in simplistic terms: why bodies are our own, why we always ask to touch, why they can’t lick my face, why we touch their butt during diaper changes. I often find myself over-explaining bodily autonomy, long after Max’s attention has jumped ship. Through these encounters, we learn each other’s boundaries and Max helps me rewrite the script of how touch was taught to me—as an obligation owed to most anyone who asked for it.

Because of our mutual trust, there are times when we chestfeed that I am able to feel wholly embodied, and we lean eagerly into each other as the veil thins. We perform a ritual that is safe and sacred in a way that few other intimacies have ever been. I am in awe of their knowledge, their body’s intuitive reaction to mine. Their small hands are urgent and nimble, and even as a tiny baby they instinctively knew to knead the dough of my chest, like a cat making biscuits, telling my body they were hungry, telling my milk to let down. Who has ever communicated with my person so tenderly, with such intention? Max has access to a connection I long ago surrendered in favor of disassociation—the denial of self that held me away from the trouble of inhabiting a dysphoric body.

But these moments of honeyed loving, with the golden light of late morning falling across our faces, can easily cascade into waves of fear. The neediness and incessant demand for my breasts and my time stirs memories of an endless march of careless and sometimes violent touching. I can feel my brain kicking my Self out of my body. It has taken time, and tremendous amounts of therapy, but I have learned over the past year how to tether myself when I start to drift away. Instead of pushing the internal voice aside when I feel pain or fear with Max at my chest, I listen. I hear the story my body tells—the old lies about sex, and gender, and worth—and I counter them with new and powerful truths. I do this because my child, who has lived more than half of their life in the cloistered environment of quarantine, has already surpassed me in their ability to say no, to wriggle free from spaces that don’t feel right, to demand more time, more food, more attention.

As Max grows into their body and voice, I have grown back into mine. For large swaths of my life, I bent over backwards to conform to spaces that were too small for me, gender being one of them. I’ve only recently recognized the repercussions: the anxiety that pushes me to prioritize the comfort and needs of others ahead of my own, the shame that I feel when I disagree with anyone, the fear that I will be abandoned if I make someone uncomfortable, the complacency of white supremacy and compulsive cishet conformity. Lies of the individual rather than the whole.

We didn’t find out Max’s sex prior to birth, and we still don’t know their gender. It’s ever-evolving. Recently, as they have exhibited behaviors that outsiders attribute to a nonsensical binary, I have found myself fiercely defending their gender identity—or lack thereof—only to walk away saddened that I still struggle to do the same for myself. My pregnancy and postpartum kicked up a lot of old dust for me, attached to both the safety and danger I have found in performing femininity. Would I have ever felt called to femininity if it hadn’t been forced upon me, an arbitrary decision made by the hurting people who raised me?

While I was pregnant, my body felt cartoonish, the same way it had when I first went through puberty. In both instances, I never knew where to put my hands; pictures from these time periods show fingers grasping in the air or arms waving at something out of view like birds without nests.

But pregnancy did not feel grounded in the boring reality of the binary. I felt like an alien or an archetype, larger than life and otherworldly. My gender and my body—interconnected burdens since a cultural obsession with pubescent femininity dragged me away from imaginary worlds at 11—metamorphosed.

They would never be connected again. I was wearing a costume, something beautiful and brief. Our destiny isn’t bound to our guts or our genitals. Trans-exclusionary white feminism and fundamentalist Christianity may try to make us fit into spaces defined by a twist of cells, but to be truly human is to be always in flux, a series of transformations and endless awakenings.

As Max has grown, I have made more space for myself, for saying no and disrupting cycles that feel de rigueur instead of delicious. So far, they don’t seem to mind that it takes me a little bit longer to wake up, to say what I need. I slow down and focus on Max’s voice, loud and urgent, and my own voice, loud and urgent. I answer them, I assure them, I can hear them. 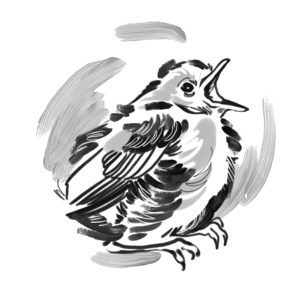