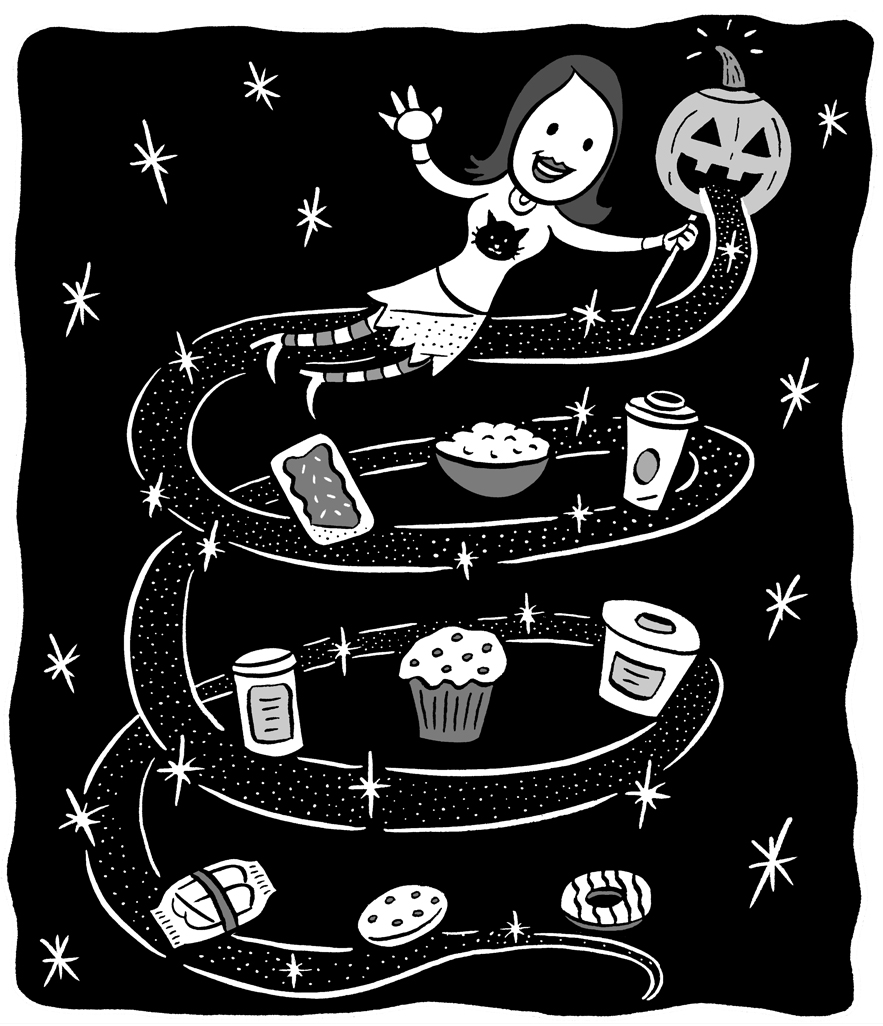 I’m not sure when pumpkin spice became a thing, but I really like it, and I don’t care if that makes me so basic that I’m in danger of breaking a pH meter. It’s tasty! It’s autumnal! It’s fun! That being said, pumpkin spice doesn’t lend itself to everything… or does it? For October, I offer these mini reviews of every pumpkin spice thing I could find at the grocery store—an experience which left me feeling like I inhabit a pumpkin-spiced abyss where everything kind of tastes like everything else. Spooky!

Starbucks Pumpkin Spice Latte
I think that Starbucks started this trend, but NOLA isn’t a big Starbucks town, so my experience with them is somewhat limited. I bought this premade “premium coffee beverage” at the grocery store and it was fine: a touch overly sweet for my taste, but I cut it with a shot of cold brew, and I enjoyed it. I couldn’t pick out any discernable spice, but whatevs.

Dunkin’ Donuts Pumpkin Spice Ground Coffee
I made this in a French press and it tasted like burnt chemical water.

Coffee-mate Pumpkin Spice Creamer
Such an odd flavor; it didn’t taste like pumpkin so much as creamer that’s about to expire. I tried it in the Dunkin’ Donuts coffee and that was truly horrific. In regular coffee, it added sweetness, but not much else. It did smell very pumpkin pie-esque, though.

Cheerios Pumpkin Spice Cereal
These were legit! I feel like they could have called it ginger Cheerios if they wanted to be more honest about the flavor, though.

Krusteaz Pumpkin Spice Muffin Mix
This muffin mix was easy to make and fairly tasty, but the finished product was definitely “muffins that came out of a box.” The flavor hinted at fall fun, but they weren’t overtly pumpkin spicy.

Frosted Pumpkin Pie Pop-Tarts
I’m not a huge Pop-Tarts person, but the filling was exactly like pumpkin pie. Win!

Chobani Pumpkin Harvest Crisp Greek Yogurt
This was a vaguely citrusy yogurt with granola in it. It was bright, subtle, and genuinely tasty, but didn’t really have anything autumnal going on. I have to wonder if this was a different flavor that had been repackaged as “pumpkin harvest.” I mean, it just tasted like yogurt?

Dave’s Gourmet Pumpkin Gluten Free Pasta Sauce
Dave’s pasta sauce was the best thing I tried this entire investigation. It was creamy and tasted more like roasted red peppers than pumpkin, but with a hint of cinnamon and nutmeg. I plan on going back and buying an entire case whenever these inevitably go on sale for 75% off after the pumpkin spice season has ended.

World Market Pumpkin Spice Gnocchi
Tasted like a good packaged gnocchi. While there was nothing specifically pumpkin or spice about them, they paired well with the pumpkin pasta sauce.

KIND Caramel Almond Pumpkin Spice Bar
These were very good and more interesting than I expect a granola bar to be. The cinnamon-and-allspice-laced caramel really won me over.

Nutri-Grain Pumpkin Spice Soft Baked Bar
It was truly odd to me that these bars didn’t taste like anything. Like, I knew that I was eating a food product; I could feel the texture on my tongue. But they didn’t actually have any discernable flavor beyond vague sweetness. How is that possible? I think this would be a great choice if you had an upset stomach or something; but otherwise, why bother?

365 Pumpkin Spice Bites
You know those little Combos snacks that are pizza, buffalo wing, or nacho flavored? Well, if you’ve ever wondered what it would taste like if someone made a McDonald’s apple pie flavored Combo, this is the snack for you. Otherwise, run as far away as you can, because these were the weirdest thing I’ve eaten in a while. They contain “pumpkin powder,” but are otherwise just these little sugary, crunchy, apple-flavored things that are vaguely like deep fried cereal. I thought they were disgusting, but I also kept eating them, so I don’t know what that says about me.

Oreo Pumpkin Spice Crème Sandwich Cookies
I should admit that I’m a longtime fan of these Oreos; they’re really excellent. The cookie part is graham cracker; and while the filling is bright orange, it’s definitely more spice than pumpkin: cinnamon-y with hints of ginger. In fact, they taste a good deal like Newman’s Own Ginger-O’s, which are my favorite of the Oreo knockoff cookies.

Nestlé Toll House Pumpkin Spice Morsels
This was an odd one. These morsels are little, disconcertingly bright orange, pumpkin spice bombs. They would be cool inside of brownies, as the finished product would be very Halloween appropo.

Nestlé Toll House Pumpkin Cobbler Cookies
As I’m completely committed to the concept of being extra, I mixed the aforementioned pumpkin spice morsels into these cookies before baking them. I should not have done that.

Keebler Pumpkin Spice Fudge Stripes Cookies
Instead of fudge stripes, these cookies feature pumpkin spice stripes! The flavor reminded me of those cheap iced animal crackers that they sell at the corner store. I have no idea if that’s a good thing or a bad thing.

Pepperidge Farm Pumpkin Cheesecake Cookies
These cookies made me think of slightly stale, soggy gingersnaps. I liked them, but I was also possibly descending inexorably into madness at this point.

Ben & Jerry’s Pumpkin Cheesecake Ice Cream
Ben & Jerry’s has the flavor down with this one. It’s reminiscent of the pumpkin cheesecake at Olive Garden. I put a scoop on top of those Nestle cookies, and it was really something wild.

Hostess Pumpkin Spice Twinkies
I’m not sure what’s going on here, or even who I am anymore, but these twinkies tasted just like king cake.