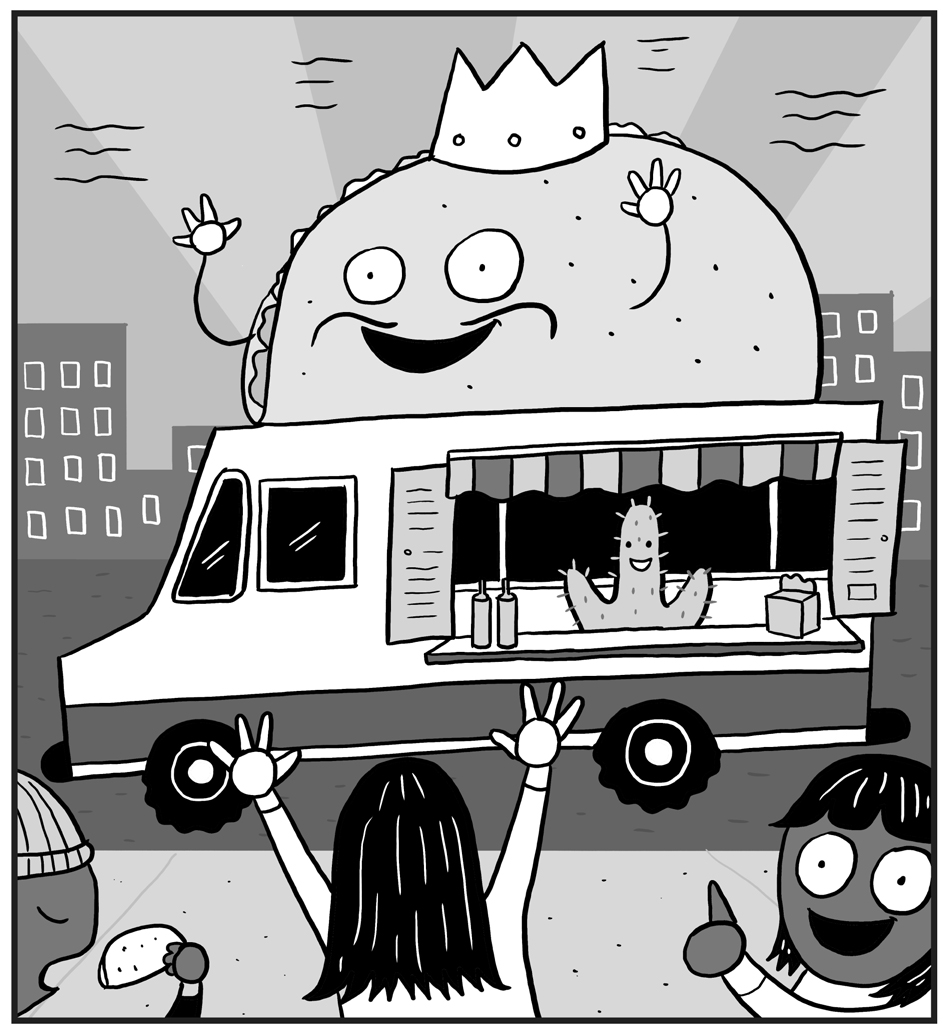 You already know that I love tacos and food trucks, but it’s time to talk about taco trucks, which are legit my favorite places in town to get Mexican food. I honestly eat at a taco truck at least once a week because they’re cheap, tasty, and convenient. All of the tacos we’ll be discussing here are of the classic cilantro/onion/lime variety, which—of course—is the way tacos should be. I’m identifying these partially by where they park, but due to the transient nature of food trucks, be warned that they may move around. Also, just so you know, my Spanish is completely abysmal and I managed to successfully place an order at each of these trucks; so don’t be afraid if your language skills are lacking.

Taqueria La Coyota #1
(empty lot on N. Claiborne right on the St. Bernard Parish line)
There’s a huge sign that proclaims “BEEF TACOS” on the side of the truck—like, it’s really big. So I went ahead and ordered “beef tacos,” which could really mean anything from steak to ground beef, right? Well, it turned out to be a very good carne asada: the beef was thinly sliced and perfectly grilled, seemingly seasoned with only lime, salt, and pepper. I definitely enjoyed these tacos, but felt somewhat let down that the tortillas fell apart roughly three quarters of the way in because they were so flimsy (they don’t consistently double up on tortillas here). This was the least pleasant of all of the locales for me, but mainly because I got hassled a whole bunch while waiting for my order. The tacos were pretty good, though. 7/10 BEEF TACOS

Taqueria Los Poblanos
(next to the Family Dollar on S. Broad at Canal)
This truck used to serve pupusas back when they parked on Elysian Fields and N. Claiborne (they also used to have a taco stand in Chalmette), but I think they must have changed ownership, which is hella disappointing to me as a pupusa superfreak. Oh well, let’s talk tacos. The tacos de pollo were quite bright and citrusy; a mystery salsa that came packaged in with the tacos—I honestly don’t know what it was—worked exceedingly well with the shredded chicken. The carnitas (pulled pork) actually tasted slow cooked and had an undeniably smoky flavor. My favorite overall were the chicharron. I’m admittedly a big fan of fried pork, so it isn’t surprising that I loved these; they were simultaneously crispy and pleasingly chewy. The locale is less than ideal, but only because there’s literally no shade whatsoever on this block of Broad, so be prepared to wait around in the sun for a while. And I do mean quite a while, because this is definitely the slowest service of all the taco trucks—my order took about a half hour on both of my most recent visits. But it’s also really close to the courthouse, so you may as well pick some up next time you have jury duty, a traffic ticket to contest, or if you just find yourself on Broad with some time to kill. 8/10 Superfreaks

Taqueria La Delicia
(under the overpass by Lowe’s on Elysian Fields)
First things first: they grill their onions! I absolutely wasn’t expecting it, and I wasn’t sure that I’d like it when I unpacked my tacos, but it completely differentiates this spot from all the other places that I ate at during this investigation. The al pastor was the clear winner—the guajillo and pineapple flavored pork was pleasingly sweet, and was perfectly complimented by the grilled onions. If I’d been served these tacos at a proper restaurant, I would have been impressed. I definitely didn’t expect that level of complexity from a food truck with an eternally flat tire (I’m actually kind of confused about the flat tire because I’ve driven by when the food truck isn’t there, and like, how do they move it?). Did you know that pork al pastor is cooked on a rotisserie spit shawarma style? The grilling method was brought to Mexico by Lebanese immigrants in the early 1900s. Isn’t that cool? OK, history lesson over—let’s talk chicken. Their tacos de pollo were tasty enough, but I wasn’t overly impressed with them. The buche (pork stomach) was likewise fine, but I’ll always pick the al pastor here. Bonus: this location is very easy to park at, which is always a plus. 9/10 Grilled Onions

Taqueria Sanchez
(under the overpass across from Home Depot on Earhart)
Perfectly serviceable tacos, but don’t bother. See below for why…

Bourbon Kitchen Cruise
(the other one under the overpass across from Home Depot on Earhart)
OK, so there are two taco trucks under the overpass by Home Depot. One is Taqueria Sanchez, and the other is the rather intriguingly named Bourbon Kitchen Cruise. There are pictures of Mardi Gras beads and masks all over it, so I’m assuming that it used to be a food truck of an altogether different genre, but who knows? Feel free to bypass Taqueria Sanchez and make a beeline for Bourbon, because it is so much better. I was delighted to discover that their tacos were made using handmade corn tortillas. And not only handmade, but excellent: thick and soft, they taste very much like maize, but aren’t at all dry. What is this magic?! There are also a few bottles of a ridiculously delicious and mysterious creamy green sauce set up on the folding table next to the truck. I’m not positive what’s in it, but it tastes like roasted tomatillos, maybe? That mystery sauce is really GOOD. I mean, everything I’ve tried from here has been excellent: the chicken was tangy, the al pastor was sweet, and the carne asada hit right at that perfect spot before being burned. You know what I mean. Like, it tiptoed up to the edge of being overdone and then was all, “Nah, just kidding. Here I am, just perfect.” These tacos are simply excellent. This truck is also parked in my favorite location: it’s under an overpass, so it’s super shady, and they have a couple plastic card tables set up with folding chairs, so you could theoretically settle in and dine right there. When I say I eat at a taco truck once a week, this is the one I’m talking about. 10/10 Incongruous Graphics