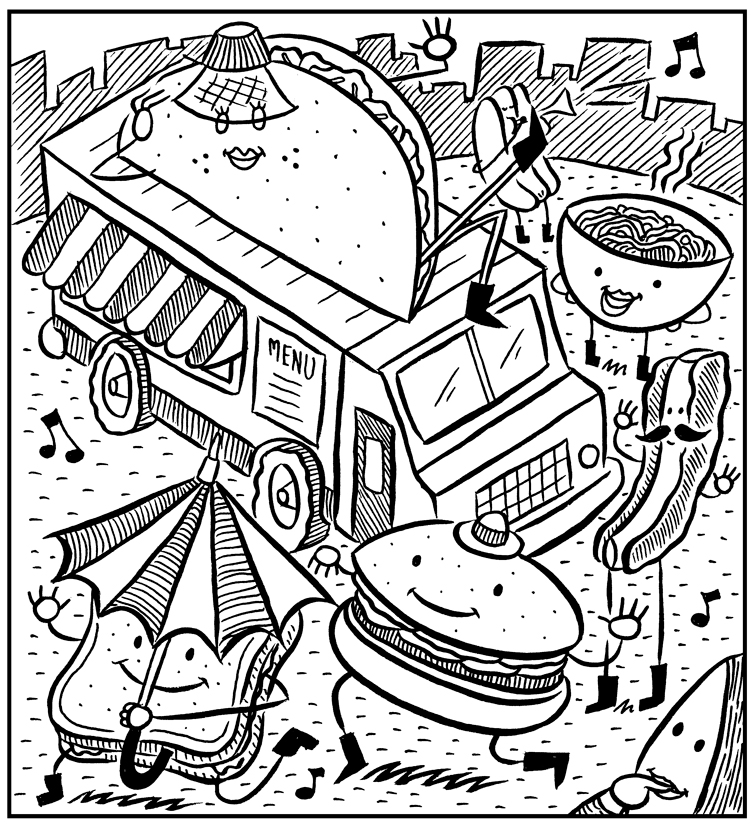 Remember the hubbub a few years ago when City Council changed the laws regulating food trucks? I know there was a lot of concern (some of it expressed in the very publication that you’re reading right now) that more food trucks would further the Portlandization of our fair city. But I don’t know if those fears were ever actually realized. Some light internet stalking and a perusal of the Louisiana Business Filings assured me that the common narrative—that food trucks are a white transplant phenomena—isn’t actually true. Most of the food trucks I visited this month are owned and operated by locals; and those that aren’t still don’t really dip into elitist hipster territory (the exception to that was Frencheeze which, well, you can read on to see how I felt about that one).Look, New Orleans is a very different city from the one I was born in three decades ago, and while we’ve held on tightly to our centuries-old food culture, the fact is that some things in our culinary landscape have changed. And that’s not all bad. We have two Ethiopian restaurants, there’s more vegetarian options, and we have a place to get a Philly Cheesesteak. Likewise, I’d argue that the heightened presence of food trucks hasn’t been for the worse. We finally have real taco trucks, which are the only places to get actual Mexican food around these parts (and which are a whole separate discussion—something for you to look forward to, dear reader!). But hey, what do I know? I just write about stuff I eat.

Queen On Wheels
Queen on Wheels (which, let’s be real, is the best name ever) has been around, in one form or another, for 20-plus years. I’ve mentioned in the past that I’m really not a carnivore. Sure, I like meat, but I don’t love it, which automatically makes me the wrong person to judge BBQ. Well, except that I really do love ribs! So when presented with the choice of the BBQ burger, which is apparently Queen on Wheel’s top seller, or the smoked ribs, I went ribs. Luckily, my dining companion ordered the burger and we split some white beans and the Greek potato salad. They also have poboys, spaghetti, fried fish—you know the drill. This is the type of food I’ve been eating at birthday parties and cookouts my whole life. The ribs were very good: tender, sweet, and genuinely smoky. In fact, genuine is really the word I’d use to describe everything I ate from Queen on Wheels. The white beans were creamy and perfectly seasoned. I’m not sure what differentiates Greek potato salad from regular old potato salad but it was a garlicky delight. I tried a bite of the burger and thought it was fine, if not amazing. Overall, the food was tasty and homey; the perfect place to grab a bite if you’re in the mood for a meal that tastes like it was cooked by your favorite aunt or your best friend’s mom. It’s just so comforting.
8.5/10 Best Friend’s Moms

Thai D –jing
$7 pad thai? Count me in! I ordered the chicken pad thai and an order of the shrimp fresh rolls. It was pretty OK. I know that isn’t a glowing review, but I’m not damning Thai D -jing with faint praise. It totally tasted like pad thai. The shrimp fresh rolls tasted like shrimp fresh rolls. If I’d followed an online recipe and made this for myself, I would have been totally pleased. Would I have served it to guests? Sure. Would I go back to a restaurant that served me this? Probably not. I know it sounds like I’m all over the place, but I guess what I’m trying to say is that if you work in the CBD, and you have $7, and you want pad thai, you may as well get this instead of just getting that microwaveable type from Rouse’s.
5.5/10 Perfectly Average Dishes

Rollin’ Fatties
I eat at Rollin’ Fatties roughly once a week and I’d venture to say that they have the best Tex-Mex in town. I always order the chicken nachos and the only complaint I have—which I understand is going to be an unpopular complaint—is that there’s too much meat! I like my nachos heavy on chips, cheese, and salsa, with just a touch of meat, and Rollin’ Fatties really smothers their nachos in shredded chicken. For some, this will be a plus; for me, I just try to remember to order half the meat and I’m good. The pico de gallo is tart and acidic and they never overdo it on the sour cream, which is a common nachos problem. And did I mention that the tortilla chips are homemade? But like I said, I order these nachos once a week and I know they’re solid. For the purposes of broadening my Rollin’ Fatties horizon, I ordered the tilapia tacos and y’all, what? How had I never done this before? The cabbage slaw was lovely and vinegary without being overly sour, the fish was lightly seared, and each taco was comprised of several tortillas so I didn’t suffer from the dreaded burst taco syndrome. And yes, I know I should’ve gotten one of the namesake fatties, but I don’t like burritos. I know, I know: I’m a monster. But isn’t it a testament to Rollin’ Fatties that even a burrito hater loves them?
10/10 Monsters

Frencheeze
It has come to my attention that maybe I just don’t like grilled cheese sandwiches, or maybe I just don’t like paying someone else to make my grilled cheese sandwich. Nah, I just don’t like them. At Frencheeze, I ordered the Rachel, which was smoked gouda, provolone, and tomato. And it was perfectly adequate. I can’t imagine wanting it again but if I did, I guess I’d just do it at home? I was so underwhelmed that I felt sort of guilty, like maybe it’s my fault that I ordered a boring sandwich. So I went back the very next day and ordered the Gary, which was the wackiest-sounding sandwich that Frencheeze offers: goat cheese, grape jelly, and bacon on a croissant. It was just as gross as that combination sounds, but again, maybe it’s all me? I don’t like grape jelly so maybe I was just never going to like this? I don’t understand mixing grape jelly and bacon; I don’t get why you’d want goat cheese on this? I don’t know. I think Frencheeze is probably fine. If you’re a fan of the Big Cheesy, or if you just love grilled cheese sandwiches, you’ll probably love them too.
1/10 Feelings Of Guilt

Taylor Made Wings on the Geaux
I hate the conceit of writing the word “go” as “geaux.” Ugh. So horrible. But Taylor Made Wings on the Geaux is pretty good, even with that name. I ordered the teriyaki wings and hushpuppies. My dining companion was a little more adventurous and got the sweet whiskey Hawaiian BBQ wings. He made the better choice but thankfully let me pilfer a few of his wings for myself. The teriyaki were pretty straightforward, which isn’t a bad thing, but the Hawaiian wings were as complicated as their name would suggest. I’m guessing the Hawaiian part of their name alludes to the sweetness, which may come from pineapples or some other tropical fruit, but I honestly couldn’t tell. Nonetheless, they were sweet, smoky, and boozy. Y’all know I’m a wing super fan, and these were excellent wings. The hushpuppies, though, managed to outshine even the wings. They were perfectly crispy on the outside, soft and sweet on the inside, and just salty enough to remind you that they’re not actually a dessert item. It was one of the most satisfying lunches I’ve had in a long time, and since I ate it sitting on a bench in front of my office, that’s saying a lot.
9.5/10 Wing Super Fans