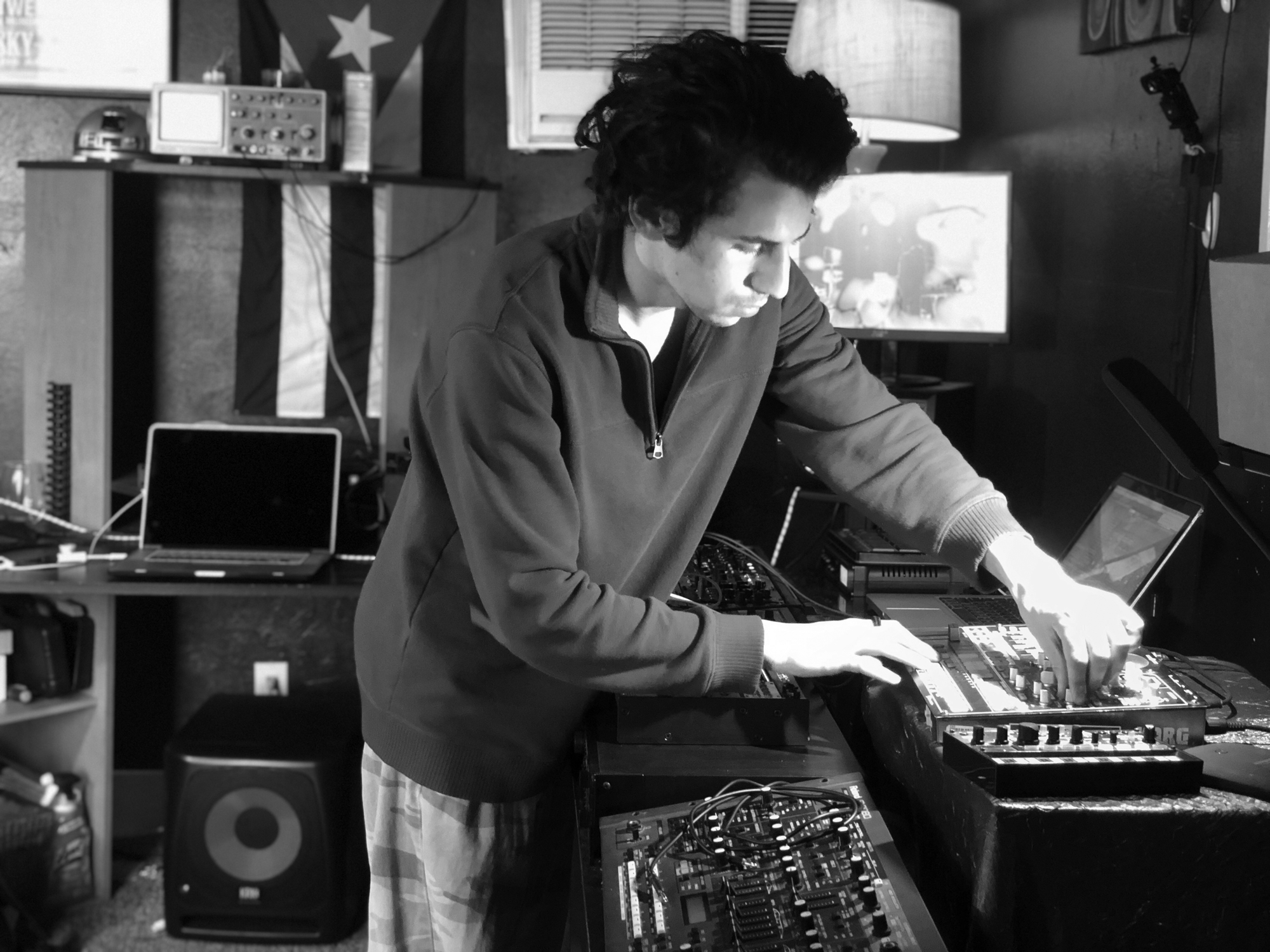 “When I hit this, it turns that one. It’s communicating with control voltage, which is, like, midi, but electricity, not 1s and 0s.” —TWANZ

Imagine a treehouse filled to the gills with laptops, MIDI controllers, pedals, cables, oscillators, and synthesizers. Now imagine you’re a French DJ from Baton Rouge who gets to play there for hours every day. It’s not a bad version of adulthood for Antoine Staib, a.k.a. TWANZ.

When we first open the gate and climb the steps to his digital den, I have a pretty specific preconceived image of the space inside. I am wrong. Every square inch of that creation station is covered in modules. I lose count less than halfway through, trying to quantify the sheer number of screens and controllers surrounding us.

The core of Staib’s setup is a completely customized modular synthesizer. “I spent time finding the sound that I was going for and testing out what equipment got me there. Each one of these pieces has a different purpose,” he explains. “The main elements are: effects, samplers, oscillators, and a polyamp preset, which basically records CV [control voltage], so I can save patches from the modular, with electricity.”

We break it down and go through each mod, starting with the 1010music Bitbox mk2 16-channel sampler. It’s pretty straightforward: a tiny silver box that stores samples on an SD card. Inspired by the box, we talk about what Staib enjoys sampling. “I’ll sample songs that I’ve already made, so I can make live changes on the tracks and perform without using a computer. I sample old records: mid ‘70s to mid ‘80s era has a lot of Rhodes and Wurlitzer with really pretty-sounding chords. I sample the end of the songs and the breakdowns. The less elements, the more simple it is, that’s the stuff I like to use that I can build on top of. I’m looking for simple, progressive chords that I can add as a nuance for the texture of the thing I’m building. Usually the samples are not the main element, they’re just an added instrumentation on top.”

Once the samples are stored, he runs them through an Erica Synths Black Hole DSP2, a multi effects unit. “The Black Hole does reverb, delay, ambiance, and widens things out in stereo. I can run anything out of it. Sometimes I’ll run full samples just to give them more character.”

As we talk, Staib is DJing and showing me the change of effects on a track he’s building over a local artist, A.J. Hall’s, sample pack beats.

“I play keys,” Staib tells me. “Once I’ve got a vibe with a bass and a synthy sound, I would bring in a keyboard and play. I can control these synthesizers with a keyboard, so I’d play on top of a loop I’ve created, like [the one we’re listening to], and record all of the layers.” 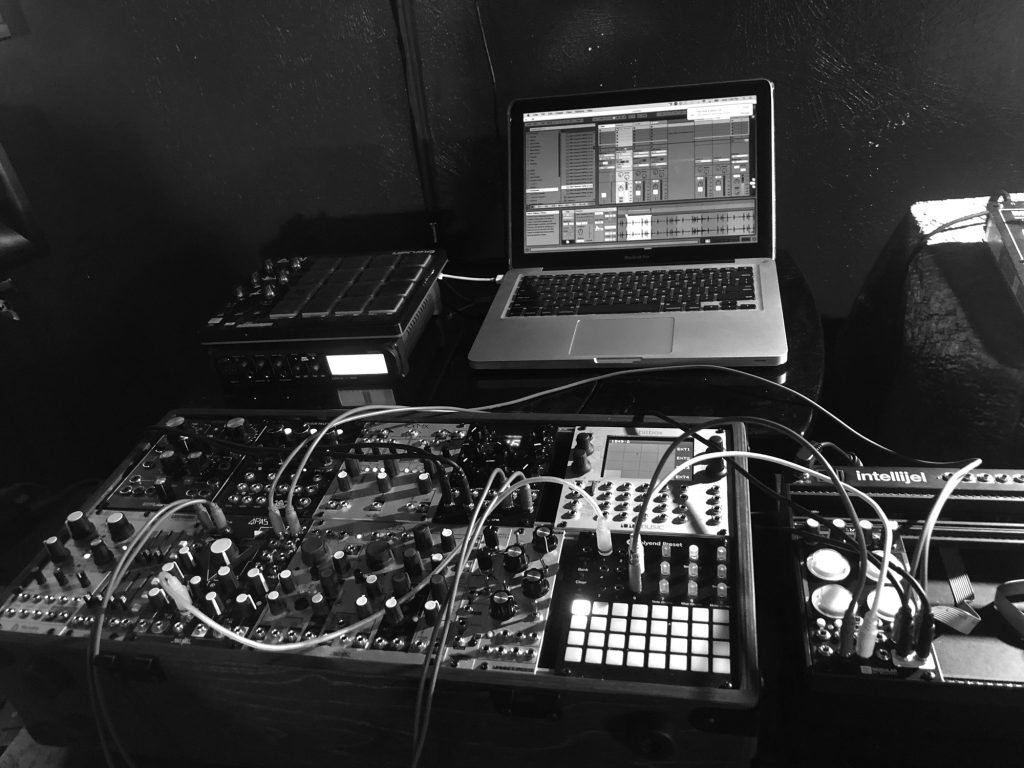 We move on to the QPAS. It’s a surprisingly sexy little module from Asheville, North Carolina. “This is basically a really complex controller—I use it to sculpt the sound, almost the way an engineer would control EQ in a studio and resonance.”

By my request, Staib turns on the Heath 25 MHz Oscilloscope, which does absolutely nothing for the sound but makes the waveforms visible on the tiny monitor of a ridiculously cool old-school hospital equipment-looking device.

Back to the useful tools, he explains, “The Polyend Preset is my controller. There’s no audio coming out of it. With the modular stuff, it can change everything in an instant, so I use this to recall the presets I’ve already created. It also determines how much of the effect is actually being applied.”

“The Black Market Colour Palette is part of something I’m building out. So far, it’s a tape saturator, another saturator, and Class A transistor—it’s a color module. I write sound in it. It’s subtle. It’s more of my mixing thing. I run it through this at the end to beef up my sound. The Intellijel is another box I’m still building.”

“The Roland JP-8080 is probably my oldest piece of equipment. They discontinued it in the early 2000s. It’s my favorite to compose with. There’s also my Korg Electribe EMX-1. It’s an all-in-one groove box. It can do synths, drums… you can technically bring samples into it, but it was made before the SD era. It takes smart media cards (nobody uses them anymore. They don’t even hold a gigabyte). I really like the vintage feel. It’s easy to play with. There’s not a lot of menu-diving. A lot of my equipment is from the early 2000s. In the late ‘90s, early 2000s there was a leap in technology where people were creating synthesizers that were polyphonic but digital. The switch to digital chips made everything smaller, cheaper.”

“My most unusual module is called a Modbap. People who make similar music to me created a module based off the SP-404. It does delay, tape stop, beat repeat, and it’s fun because it’s got arcade buttons. It comes from a specific genre of modular hip-hop, where people make hip-hop beats with modular gear.”

When I ask Staib if that’s the genre he considers himself to be in, he replies, “Yeah, modbap-futuristic-techno. I’d also be fine with electronic hip-hop, abstract hip-hop, breakbeat hip-hop, rhythmic bass, house, techno, futuristic techno hip-hop…”

I forget to even ask about the vibey live videos he makes to accompany his music, but his skills are needed for a recording session next door, so we descend the treehouse stairs and part.