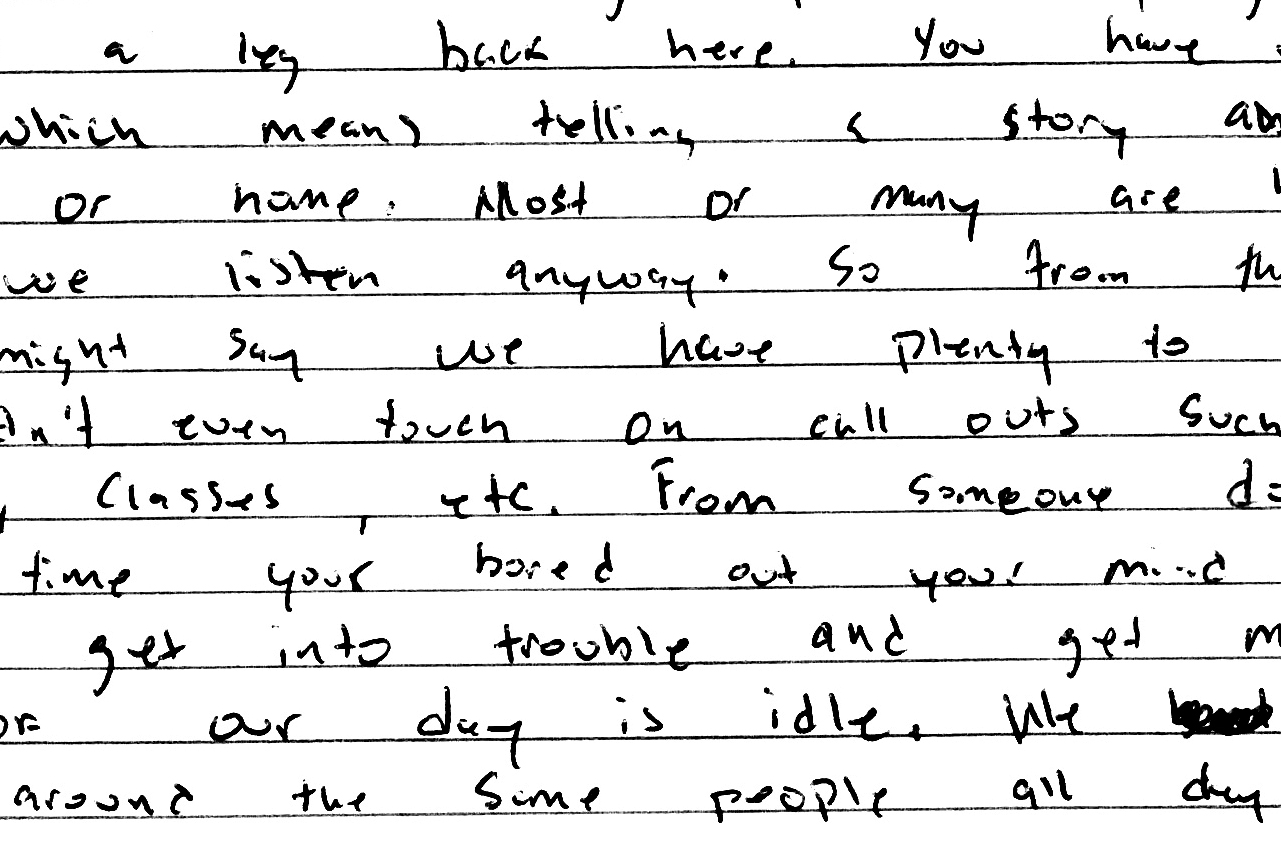 Our correspondent Yolo is currently serving a sentence at a facility in Ferriday, Louisiana. The following has been transcribed (with minimal edits for clarity and format) from handwritten letters. Because of barriers that restrict and complicate communication with people in prison, we are unable to independently corroborate claims herein.

Have you ever thought about what your [incarcerated] family and friends are doing for fun, enjoyment and/or recreation? Let me tell you about it. The D.O.C. handbook states that all D.O.C. inmates are to receive at least an hour of recreation/yard call a day. 2311 is what it’s called. However, this rule is hardly (if ever) followed in D.O.C. holding camps (satellite camps). An inmate may go days or weeks without leaving his cell or dorm for anything. Everything is delivered (commissary, chow, medical, etc.). And yard call is being postponed every day for a plethora of reasons such as weather, lack of security, being busy, and the list goes on. So with all that being said an inmate would have to find things for entertainment around the dorm.

Depending on your preference, that could be one of many things. If you’re into sports there’s gambling on every sport, also a good debate for every opinion. If you like card/board games there’s a long list of those for free and/or to gamble on. There’s books, mags, newspapers to read from, and radio, mp3s and iPods to listen to. You have a t.v. that most likely has some form of cable, although some facilities may only have a few local channels. You have workout groups that work out around the clock.

Then there’s contraband such as drugs, phones, cigs, etc. to use as you please, they just cost an arm and a leg back here. We have what we call epping, which means telling a story about yourself from jail or home. Most (or many) are bold face lies but we listen anyway. So from the outside looking in you might say we have plenty to do back here. And I didn’t even touch on call outs such as religion services, classes, etc. From someone doing time most of the time you’re bored out of your mind. That’s why so many of us get into trouble and get more time, because 75% of our day is idle. We hardly ever move.

You’re around the same people all day every day, so with all those things I named earlier you do with the same people. Eventually you get tired of the same opponents, people cheat, there’s bullying, the whole 9 yards. So you enter those tasks at your own risk. The t.v. is usually ran by a group of inmates that are violent and will pop off for anything. To use contraband you must be strong enough to hold and protect it, don’t mention smart enough, because it is illegal so the people are after it. Although some gamble, straight up most bets are schemes and are not handled fairly so that’s a whole other ball game. Some people are able to stay to themselves and read or play card games alone, while others move around the dorm jocing with/off fellow inmates. You’ll have your guys who can fix anything, maybe a tattoo artist or two. All those things and more to use as entertainment or recreation while in the dorm.

Now when rec/yard call is called a whole new realm of the jailing system is unlocked, because remember, in the dorm you’re around the same groups of guys 24/7 doing the same ole things. Now once doors are open to the yard (most facilities have a couple yards fenced off from one another) you’ll be able to see inmates you don’t normally get a chance to see (more epps, more lies). On the other hand, the yard isn’t only in your backyard. The back door to other dorms most likely leads to this yard also, so you’re able to contact and communicate with those dorms to pass notes, snacks, contraband, you name it. It could be one to three of these doors on your yard, with a yard to your right and left. So basically you’ve went from being able to contact maybe 25-35 other inmates, to a couple hundred just by walking out your back door.

Then you have your gym rats, we call them. They won’t miss an opportunity and tool to work on their bodies and work out. In the dorm it’s push-ups, sit-ups, water bags, and jumping jacks. On the outside you have sets of equipment to choose from such as weights bench, pull-up bars, field to run, etc., and your gym rats take every chance to use these that they can. So you have your inmates who come out to talk with friends, pass something, work out, to get fresh air and clear their heads, but last and certainly not least and my favorite of all activities on the yard, you have sports.

Now most facilities will have a basketball court, field for football or soccer, horseshoes, and volleyball net. Just as your gym rats don’t miss an opportunity to work out, you have your sport junkies that take every opportunity to pick up some sort of ball and go at it with the next inmate. Most battles are extremely competitive and bragging rights are always on the line, so things can get pretty heated at times, but we try to keep it in the name of the game. But you’re dealing with convicts, so it’s bound to get a little heated every once in a while. But it’s pure fun, nothing like some good competition to get the juices flowing. And I’ve always loved sports so this part is right up my alley. I try to attend every chance I get (which aren’t very many).

The last part of recreation is my least favorite of all and I still can’t fathom why us inmates do it, but it’s fighting one another for fun or because we can’t think of anything better to do. The worst part of it is, most times, the people fighting have nothing against each other and are only fighting so that they don’t get jumped by everyone else. For the love of me, I don’t know who came up with these rules, but it states that when “rec call” is called, every stand up man is to go to the day room and line up against the wall. Now whomever called “rec call” must be the first to fight, and when they’re done, anyone who has problems goes after that. Then it gets real stupid, if you ask me. If I’ve already fought and want to see any other two people fight, I voice it and if the dorm agrees they must fight or face the consequences, which could be one of many things like you get jumped, all your property stolen, you get trained (which means people take turns hitting you, and so much more). Now this I don’t agree with, but I have played a part in it. Well I didn’t have much of a choice, now that I think of it. SMH… If you’re ever wondering what is done for recreation behind bars, this can shine a light on your darkness.