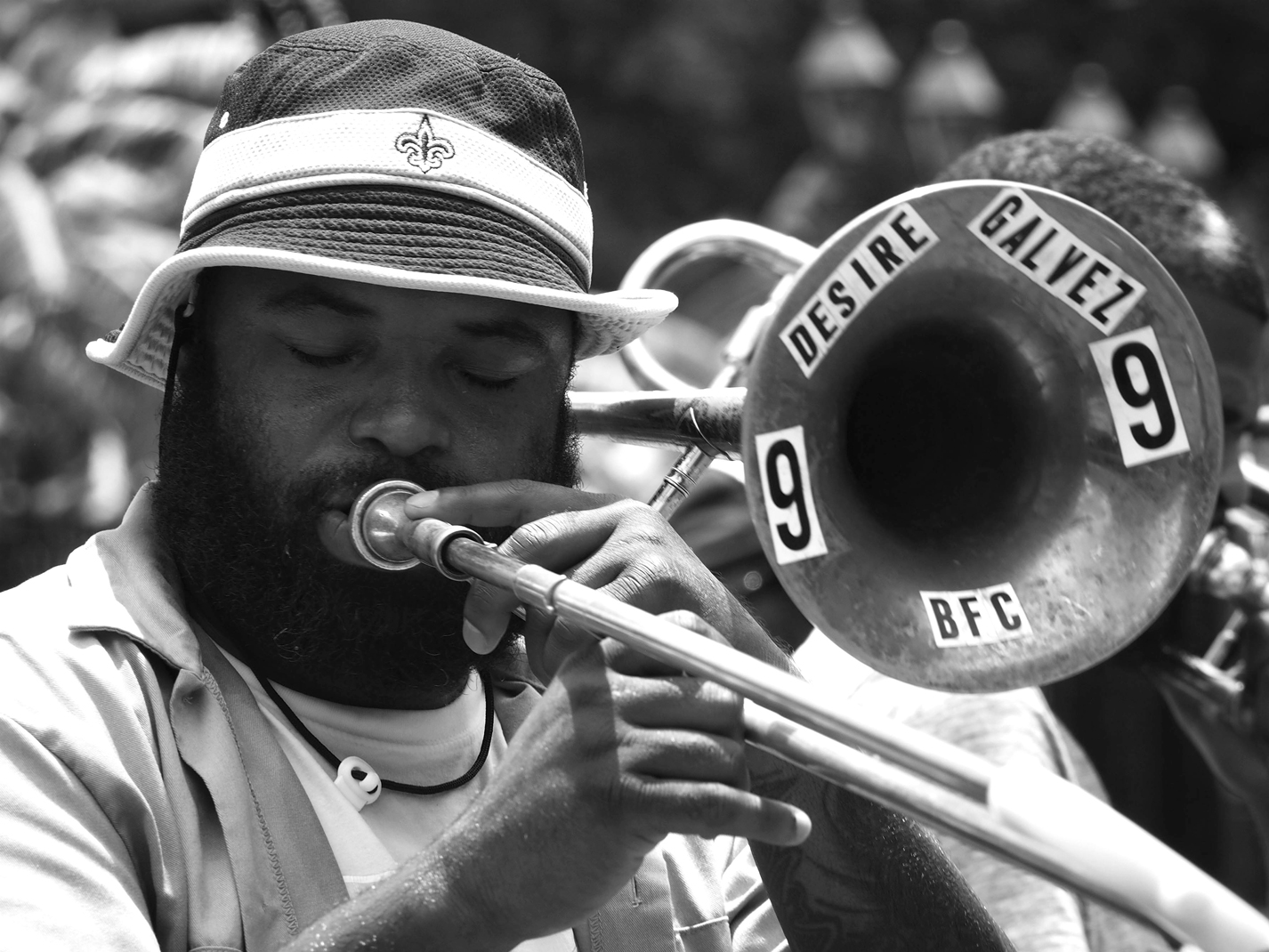 By RENARD BRIDGEWATER for MaCCNO September 2019

Playing in the high school marching band has been a natural stepping stone for many New Orleans musicians. In addition to learning the fundamentals of an instrument, the preparation and performances during weekly football games, combined with the cacophony of sounds and bright lights of Mardi Gras parades, create the perfect environment for these adolescents, one their future careers are built on. Trombonist Rashaad “Squirrel” Collins’ path to regular gigs as a member of Sporty’s Brass Band—as well as joining the Grammy-nominated Hot 8 Brass Band onstage at this year’s Jazz Fest—has been anything but normal.

After more than a decade away, he decided to return to the instrument that currently allows him to provide for his wife and family. “I graduated in 2000 and got off my horn. I stopped playing,” he recalls. One may think revisiting music is similar to riding a bike; however, there were some serious growing pains that the 9th Ward native had to make. “First of all, I was off my horn for 12 years. My chops are not there. They all the way gone. I had to build up my endurance… man, when I tell you it was a struggle…” At his first gig back, sitting in with the All-Star Brass Band, Squirrel found himself behind the proverbial 8 ball. With no rehearsal under his belt and the band calling out random notes onstage, Squirrel had no idea what to play. “That was a hell of an experience for me, dog. I was 30 years-old. I was going through some shit that people go through when they 16, 17.”

After playing with the All-Star Brass Band for several weeks, Squirrel was urged to find Wolf, a trombone player who performed all over the French Quarter. Never being formally introduced and not knowing what Wolf looked like, the search was on. “For at least a whole month, I was walking through the French Quarter just playing scales… hoping that that dude would hear me. I didn’t know where to find him,” says Squirrel. After a month, his playing led him to the corner of Bourbon and Canal Street, a corner well known for New Orleans street culture because of the TBC Brass Band. Here, the Kennedy High alumnus paid dues learning how to memorize music, and more often than not, playing for free. “I played in the Quarter for a year-and-a-half without getting paid! Every day going out there. Every now and then they might give me a little something,” exclaims Squirrel. At this time, he was living in Gretna and had to take the ferry home after a full day of busking until at least 10 p.m. Squirrel would have nightly conversations with the statue at the Algiers Ferry and found himself “blowing at the city” in frustration for not being compensated. Eventually, a fellow musician asked if he ever played in Jackson Square.

The “hard hitters” of the Square provided another valuable learning experience for Squirrel. One day while playing, the drummer of the Jackson Square All Stars mentioned he was playing in the wrong key. A moment later after communicating internally, the entire band moved to another bench, sans Squirrel, all in front of a crowd. “I feel like if anyone who would’ve stayed off their horn for 12 years and waited until they were 30, they would’ve said, ‘I’m not going through this.’ I went through humiliation, son,” says Squirrel. In July 2016, he first used the hashtag #TromboneTrapping in an online post. “I used to call Jackson Square ‘The Asylum.’ I got my trombone in my hand and it’s like we sitting in a trap. It feels like I’m trapped in the Square… We making money but, dog, there’s an easier way.” Despite its suffocating and repetitive nature, busking in the French Quarter allowed Squirrel to sharpen his skills and musicality, leading to further opportunities. “When you’re playing on the streets, it’s like you’re on stage. It’s no different, you just on the street but that’s the practice stage. How much time you put into that determines how quickly you can start gigging,” explains Squirrel. Over time, the trombonist has played with One Sound, New Creations, All For One, and Legacy Brass Bands, eventually leading and booking gigs with the latter.

For some artists, time is their only opposition. Although his journey has been abstract, in less than seven years, the Trombone Trapper has beaten the odds and made significant strides in his musicianship. “I had people that used to come tell me, ‘Squirrel, you moving fast.’ They’d tell me, ‘My first four or five years, I wasn’t doing all the things you was doing.’ I have high expectations for myself so I’m not gon say I’m never satisfied, but I have this thing about me I feel like I can always be doing better.”

There’s been a noticeable increase in issues affecting New Orleans culture. Here’s a quick rundown. Keep your eye on this page or follow us on social media for updates (facebook (maccnopage) or @musicculture504 on Instagram and Twitter).

This is scheduled for a vote on September 19. Some of the worst provisions, like the requirement for real-time surveillance cameras, have been removed. But there are still some issues with the ordinance, particularly a section that would give several city agencies the power to order an emergency shut down of any business that sells alcohol, which business owners think is ripe for abuse.

District C Councilmember Palmer spearheaded a study to examine limits to outdoor music and dining for businesses next to residential areas in the Treme, Marigny, and Bywater. It turns out the Department of Safety and Permits has decided that no new businesses anywhere in the city can have outdoor live music due to what we believe is a flawed reading of the Zoning Ordinance. For now, existing businesses with outdoor music should be able to continue to host performances, but no new business will be able to have music outside. We’re looking into the best way to address this situation to ensure New Orleans’ tradition of outdoor music will be able to continue.

In the past six weeks, there have been two arrests of street performers at the corner of Frenchmen and Chartres Streets—trumpeter Eugene Grant on July 8, and freestyle rapper Unscripted on August 15. Both were arrested specifically because they were performing, which is extremely uncommon. We are deeply concerned at the increasingly aggressive treatment of street performers and are working with a number of organizations to address this and hope to have some action steps soon.

We have confirmed that the Health Department is working on a new update to New Orleans’ Noise Ordinance. We don’t have any details other than they expect public input on the revisions in the Fall and Winter. We need to be ready!

The Music and Culture Coalition of New Orleans (MaCCNO) is a broad-based coalition and registered 501c3 non-profit corporation that collaborates with, organizes, and empowers the New Orleans music and cultural community to preserve and nurture the city’s culture, to translate community vision into policy change, and to create positive economic impact. This page is provided to MaCCNO as a community service and does not necessarily reflect the opinions or editorial policies of ANTIGRAVITY