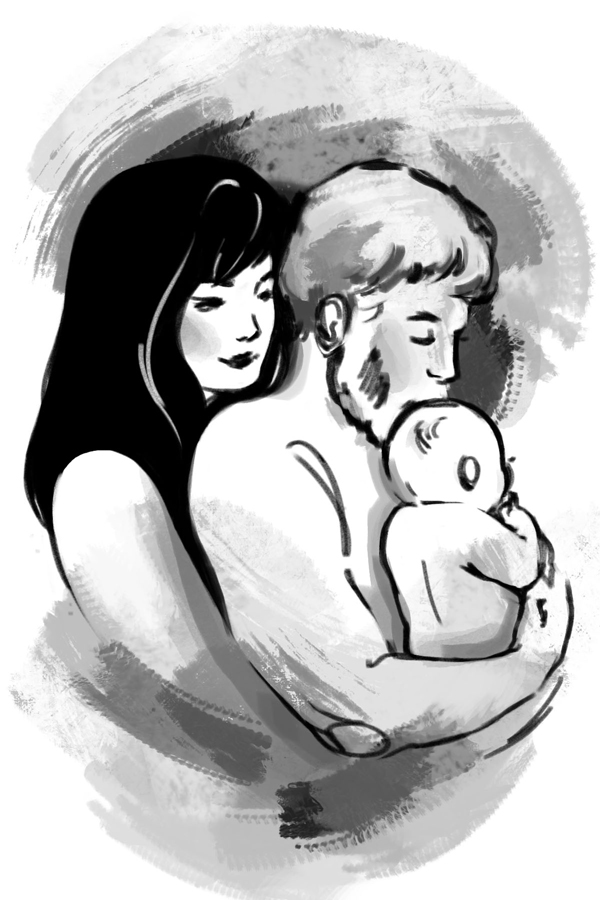 Like Mother’s Day before it, Father’s Day is rife with all sorts of warring emotions. Some people have difficult relationships with their fathers. They may be estranged; or perhaps they never even knew each other. Or maybe, like me, all the day holds for them is the promise of social media feeds filled with sweet posts and heartwarming photos that just serve as a reminder that you can’t send a Hallmark card to the cemetery. In anticipation of what I know is going to be a very difficult day for me, I have chosen to actively celebrate Father’s Day this year by not only honoring my father, but by recognizing all the amazing fathers in my life.

A GOOD MAN IS HARD TO FIND

In the last five years, I’ve had the distinct pleasure of watching some of my favorite people become fathers. To see them morph from often-drunken, somewhat-aimless 20-somethings into “someone’s dad” has been so much fun. They didn’t grow up overnight, of course; they still do plenty of stupid things. When you’re a kid, you’re convinced that being a parent means someone is a “real” adult. Turns out that’s only partly true.

What it does guarantee, though, is growth. I’ve watched these men, both my dear friends and my actual brother, as their hearts discovered rooms they didn’t even know existed before their children were born. I’ve seen them practice patience and model kindness. I’ve seen them change poopy diapers and braid hair and wipe away tears. I’ve seen them work with their wives and partners like a well-oiled unit, from curbing meltdowns to executing delicate car seat transfers.

Each of these men has a special place in my heart. And I am encouraged daily to see them protecting, shaping, and cultivating the future of our world. I love them and I love their kids. But what I love most is their love for their kids. In a world full-to-bursting with acrimony and hatred bred from toxic masculinity, they are a reminder that for every crappy dudebro in a bar harassing a poor woman who’s just trying to have a drink in peace, there is a man reading a fifth bedtime story to his insatiable toddler. There is a daddy putting a band-aid on a bobo or scrubbing sweet potato puree off a giggling little face. I believe in good men, because I know them.

Though we’ve been married just over a year, I’ve been with my husband John for nearly 12 years now. We got together just after college and have essentially grown into adults together. And while I’ve always known I wanted to be a mother, he told me once that while he figured he would one day be a father, he hadn’t really imagined much about it beyond that. So it has been surprising to see him dive so deeply into fatherhood these first six months of our son’s life.

I will never forget the look on his face when Emmett was born. But I have an equally vivid memory of one of those early nights just after coming home from the hospital. I was exhausted and my body still hadn’t really begun to bounce back from my marathon (41 hour) delivery. Every time I tried to nurse Emmett, I would have intensely painful cramps (nursing actually helps the uterus to shrink back to its normal size after delivery, so this was all normal, but it still hurt like hell). At one point, the cramps were so bad that they felt almost exactly like my labor contractions had felt. My back spasmed and I couldn’t help but weep (frankly I was probably feeling a bit of PTSD).

I sat there shaking, trying to keep my son properly latched so he could eat, and John sat behind me, applying counterpressure to my back, rubbing my shoulders, simply attempting to find any way he possibly could to help me relax. Once Emmett unlatched, he took him from my arms and paced the floor with him, gently bouncing him to sleep.

We were keeping the room dim to help facilitate day/night differentiation for Emmett, and by the muted light of that little silicone whale lamp, I watched my husband become something brand new that night. I had never been more attracted to him or felt more fiercely tied to him. This was the first night of many that he would wake with me and essentially hold my hand in the darkness as I struggled to find my way as a mother.

The next few weeks and months would test our bond even more, as I fought to beat back the darkness that threatened to swallow me whole following my father’s death. He was right there in the trenches with me, taking Emmett from my arms as I sprinted through the halls of the hospital at 3 a.m. after getting that terrible call from my brother, holding my hand as I fought back tremors and wails at the funeral, cradling my head as I lay in bed, convulsing with tears, going on and on about how unfair it was that my father would never hold his grandson. I even admitted to him that I felt resentful that his father would have that chance. I hated myself for those feelings. Frankly, I hated life. And I hated waking up every morning, but I kept doing it. Because he kept telling me that I could.

My husband isn’t a perfect person by any means (who among us is?) but he is my person. In my darkest hour, at my absolute worst, he saved me. But he didn’t do it by trying to fix me. He didn’t admonish me for being selfish or accuse me of slighting our son. He just sat with me in my pain. He let me rant and rave and scream and weep whenever I needed to. He held the broken pieces of me together until I found the strength to pick myself up and find some glue.

I’ve had the distinct pleasure of watching some of my favorite people become fathers. To see them morph from often-drunken, somewhat-aimless 20-somethings into “someone’s dad” has been so much fun.

He may have never daydreamed about being a father, but he is the greatest father our son could have. I watch them together and it fills me with a kind of joy I didn’t know I could experience. Our bedtime routine every night consists of a warm bath, a bottle, and a book. Watching my husband scrub between my son’s tiny toes or read to him animatedly about the bedtime habits of dinosaurs reminds me that my life still has purpose. That even in those moments where I am tempted to let the darkness take me, there exists such brilliant light.

FOREVER AND EVER, AMEN

You know, my dad was skeptical when he first met John. He thought he was a bit scrawny and maybe too brainy. I think he’d always hoped I would marry a man more like him: someone big and strong and rugged who owned plenty of guns. But over the years, he started to see what I saw. He grew to respect and love John, but he still wasn’t pleased with how long it took us to get married or have kids. In fact, when he awoke from heart surgery in 2013, the first thing he said to us was, “It’s time to shit or get off the pot, son. A woman don’t stay fertile forever, you know?”

That was my dad, 100%. He did not mince words! But he was quite happy with how things turned out. My mom made sure John knew that in the immediate aftermath of Emmett’s birth, my father had raved about how happy he was that I had found such a wonderful man to marry. While they may have seemed very different on the surface, deep down, I think they were very much alike. I feel so deeply cheated that my father isn’t here with me anymore, but I derive some comfort from knowing that he realized my heart was in good hands before he left.

I wrote the following words just days after his death and the officiant was kind enough to read them at the funeral. It sums up everything about who he was to me and what I will honor—and mourn—as I celebrate all the amazing fathers in my life this Father’s Day:

I’ve always been what my dad would call a busybody. As a child, I never shut up and I never sat still, so he dubbed me “Worm.” Despite my overactive drive, my dad always made sure to involve me in his life. I was a regular fishing companion of his, though I didn’t carry my weight at all. I was grossed out by the wriggling dirt in the styrofoam cup, so he had to bait my hook for me in addition to removing the fish. Essentially, I really just wanted to cast and reel. So he let me. Over and over again. Every Saturday. For years.

We would ride up to the river in the early morning light, listening to the oldies or country station in his truck, cooler packed with tiny bottles of coke (Pepsi for him and Dr. Pepper for me). He even took me hunting, despite knowing that I would talk incessantly and scare away all the deer. He taught me everything there was to know about the game of football, and it’s a passion we shared to his last days. Whenever someone jokes that women don’t understand football, I laugh to myself. And then I turn around and call what a penalty will be before the ref even turns on his mic. My daddy didn’t raise no fool.

In the end, I will remember my father for half a million wonderful small things. Precious moments and special looks and plenty of somewhat off-color jokes. But what he was to me, most of all, was a safe place. He was obviously a physically imposing figure, but it wasn’t just that. When I was sick as a child, I always requested to be able to wear one of his t-shirts, as I was convinced it sped up the healing process. And in the winter when the house was drafty, I always wanted to curl up next to him because he literally radiated heat.

He was comfort and safety personified. And even as I struck out on my own and built my own family, he remained that for me. If anything on my car ever broke, he was the first person I called. When I was in the throes of the hardest part of labor with my son Emmett just last month, he sent me a text that just said, “We love you, Worm.” And from two states away, through just a few words on a glowing phone screen, he instantly made me feel safer and less scared. I’ll miss so many things about my daddy, but I will miss that feeling most of all. 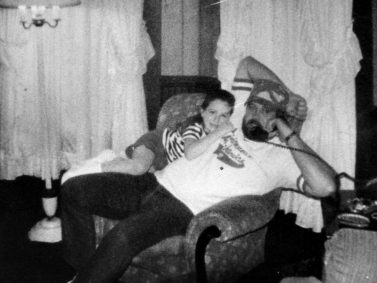 Unfortunately, my father never got a chance to meet my son. But I am reminded every time I look into his big blue eyes that there is a piece of Gary Floyd Hall in him. And in me. And that we, along with the rest of our family, will continue to think of him and speak of him—to tell his stories and laugh at his jokes—and that he will live on in each of us, in all the small and big ways. Because not even death is enough to dampen a spirit as big as my daddy’s.