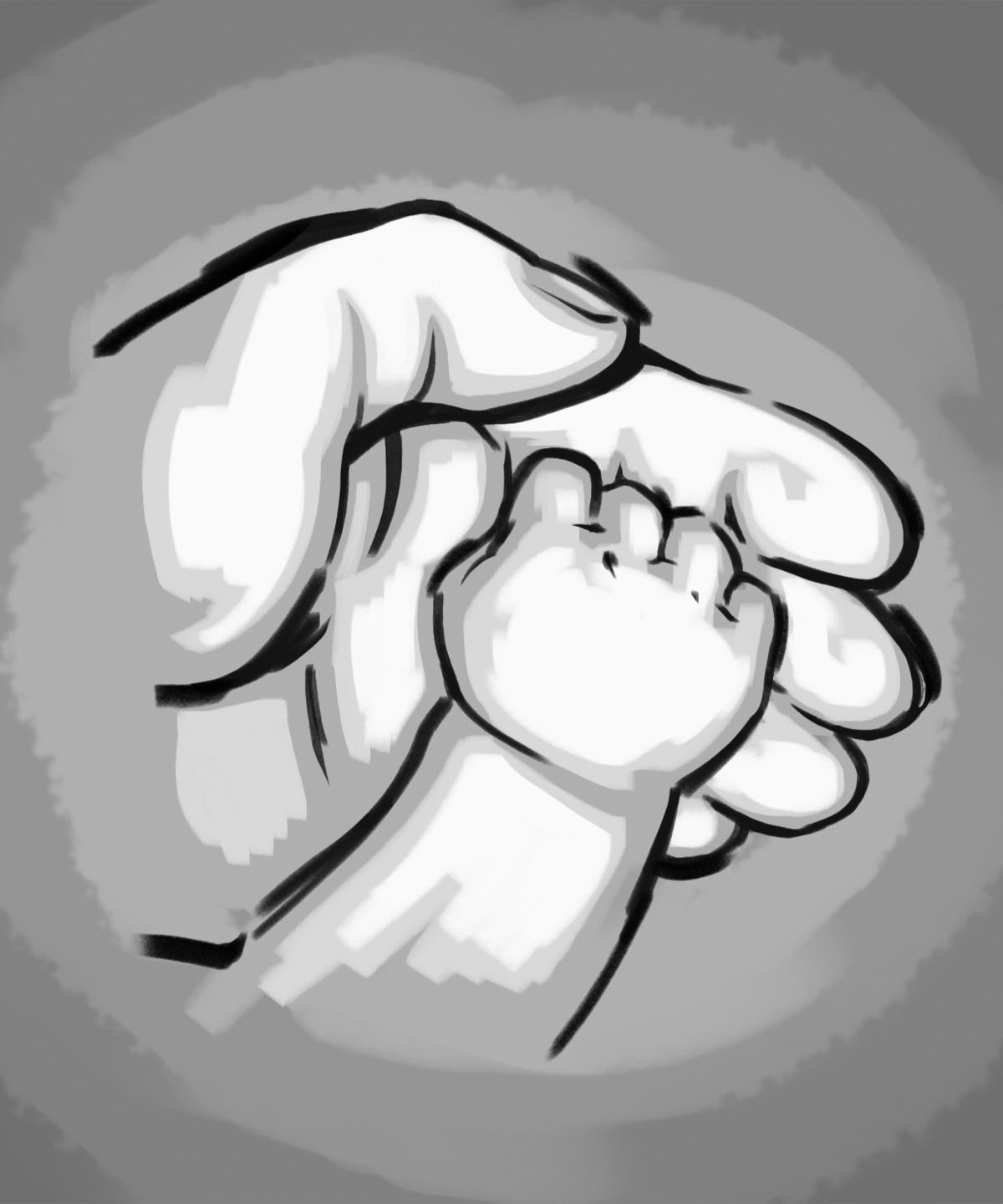 Now that we’ve survived the first year of parenthood, my husband John and I are finally allowing ourselves to think about what the next 10 to 20 years will look like for us. We hope to be able to have one more child, but we’re in no particular rush to do so right away.

While we are overwhelmed thinking about how we can stay in New Orleans—insane housing prices and the convoluted education system are a real peach—we’re also wondering more generally what Emmett’s life will look like. Who will he grow up to be? What will he love? What will make him happy? How will he remember us and his family?

It’s in that train of thought that I find myself feeling a bit helpless. I know that Emmett will never “love” my father in the way I had always imagined my child would. And that’s not his fault; he won’t get to have any of those formative experiences with his grandfather. He’ll only know him from pictures. He won’t remember the feeling of being held in his arms like I remember my grandfather holding me.

January 7 marks one year since we lost daddy. The universe has a monumentally unfair sense of timing, as the anniversary of his hospitalization, passing, and funeral pretty much overlaps my son’s birthday, my brother’s birthday, Christmas, and my birthday. I’m not sure when this time of year will be less awful for us, but I’m trying to focus on being grateful for my dad’s life instead of being enraged that it was snuffed out so suddenly.

With that in mind, I’ve decided to spend this first anniversary focusing on how I will help Emmett truly get to know his grandfather. I’ve been writing things down for months on little scraps of paper, tidbits and stories about who my dad really was. I did it because I want to paint a more nuanced picture of him than Emmett is likely to receive in 15 or 20 years when everyone is looking back through the distorted fog of time. So here’s the letter I wrote to give to my son when he’s older.

First off, you should know this: your Grandpa Moby loved you very, very much. He may have never gotten to hold you, but your birth—and your cousin Carter’s birth—were very special days for him. He had joked with me and your Uncle Payton for years that we were never going to give him any grandchildren, so when he got two in one year, he was fit to be tied!

Everyone had a feeling when I was pregnant that the baby would be a girl. I don’t know why, but Grandpa insisted from day one that it wasn’t true. He knew you were a boy. When we called to tell them you had finally arrived and I uttered the words, “You have a grandson” to your Grandma, I could hear Grandpa in the background. Shouts of “woohoo!” and “I told you it was a boy!” came pouring through the phone.

He was already planning to take you hunting one day. He figured your daddy could take you fishing, but he knew he’d have to be the one to teach you to hunt. He even instructed Grandma to start looking for some camouflage that would fit your tiny newborn body. He was, in every possible way, so excited that you were here.

As you’ve grown up, we have done our best to tell you all about him and help you understand what kind of man he was. A lot of times, talking about Grandpa has made us all sad. But it’s very important that we keep talking about him, because doing so is what keeps him alive in our hearts. Here are some things you may not know about him:

Grandpa was born in 1951, and he grew up living way out in the country with his mom, dad, two sisters, and three brothers. He lived next door to his grandparents. They didn’t have running water for most of his childhood, so he had lots of funny stories about the outhouse. Ask Uncle Payton to tell you why Grandpa said you always needed both a red and a white corn cob.

When he was a teenager, he worked at a soda fountain. All the old ladies who came in wanted him to make their malts because he was so handsome and polite.

He served in the Army during the Vietnam War. Because his brother was stationed in Vietnam, Grandpa was kept in Germany, away from the front lines. He spent most of his time there learning to desensitize land mines.

He got into a bit of trouble during his Army days. He had a penchant for bending the rules. He told me this meant he spent a lot of time peeling potatoes.

He once got caught by his commanding officer for sneaking off base. He was buying chocolate covered cherries at the store, and the officer made him sit down and eat every single one of them right then and there. He didn’t eat cherries for years after that!

His favorite flavors of ice cream were very unique. He loved Cherry Vanilla, Orange Pineapple, and Black Walnut—all things you don’t see much of anymore.

He was a good, law-abiding man, but he was arrested once. He was at a hotel bar waiting on some friends to join him when a man pulled his (rather long) hair and called him a bad name. Grandpa turned around very calmly and punched the man in the face, who then dropped to the floor. Grandpa turned around and told the bartender he knew the police would be called and he would gladly wait there for them, but could he please have one more beer while he waited.

He and Grandma eloped and were married in a small chapel in East Texas. Grandma’s parents weren’t happy about it at first, but as they got to know Grandpa, they grew to love him too.

He and Grandma both had amazing hair when they were younger. Their wedding photo looks like a shampoo ad from the 1970s.

Grandpa always referred to himself as a “veil child.” This means that when he was born, the remnants of the amniotic sac were draped over his head. In many cultures, this is a sign that a person will have special gifts. Mostly, Grandpa just tried to tell us he could see the future and used his “powers” to guess the correct multiple choice answer on the National Geographic quiz on Sunday nights.

He was a very gifted hunter. In addition to being a sharpshooter, he had great respect for nature and animals. He didn’t hunt just for sport and he believed in using every part of the animal. Hunting makes a lot of people sad, but Grandpa didn’t do it for trophies; he did it to put food on the table.

He was a welder by trade. His job was dangerous and physical, but he excelled at it and made a lot of friends in the 35 years he worked there.

He didn’t do too much cooking, but he did love to grill. In fact, he built his own grill and then made one for us too. He welded them himself out of leftover scrap metal lying around at his job.

Grandpa and Grandma’s house had very tall ceilings and we always had a huge tree at Christmas time. The regular tree stands you can buy at the store wouldn’t hold our trees, so Grandpa welded grandma a custom stand to put her monstrous trees in. He always fussed about how heavy the tree was when he had to bring it into the house, but once Grandma had the lights and ornaments on it, he was happy.

He loved to watch Westerns on Saturday mornings. Even better if he could do it while having a sausage, egg and cheese biscuit from Hardee’s.

He drank his coffee strong and black and usually had at least four cups a day.

He LOVED cheese. He always joked that if it’s good, cheese will make it better. His favorite kind was old fashioned red-wax hoop cheddar.

He liked all kinds of music, but was especially fond of Bluegrass, Zydeco, Motown, and classic Country.

He once insisted to Grandma that he could make his own blue jean cutoff shorts, so she let him. He cut them so short the pockets hung out below the fringe. He wore them anyway, because he didn’t want to be proven wrong.

He loved to scare all of mommy’s friends when she was younger by telling them the house was haunted. To be fair, it probably is.

People sometimes had a hard time understanding Grandpa, as he had a tendency to mumble. The first time daddy met him, he just shook his head and said “yes sir” a lot. Eventually he figured it out.

Grandpa was a bit of a sucker when it came to dogs. The dogs would beg him for food and even though he wasn’t supposed to, he’d slyly slip them a bite. Moments later he would say, “Get on now, dog!” and pretend nobody saw him feeding them.

His nickname for mommy was “Worm” because I never sat still and never shut up when I was a little girl.

He had an epic beard. He once had to shave it for work because the gas masks they had wouldn’t seal properly unless you were clean shaven. I came home from church one night to find his face totally bare and I cried for hours because I’d never actually seen him without facial hair. When he retired, he grew it out however he liked. At one point, he looked like a lost member of ZZ Top.

I always joked that he looked a bit like Monterey Jack from Rescue Rangers, but sounded like Foghorn Leghorn from Looney Tunes.

He was a massive fan of the Alabama Crimson Tide football team. When mommy was young, she cheered for Alabama with him. One day she decided she didn’t want to be an Alabama fan anymore, so she started cheering for Auburn. From then on, Grandpa referred to that as the day I broke his heart. He called me a “fence jumper” for the next 20 years.

He believed cornbread should be served with every meal, and that the only way to prepare it properly was in a cast iron skillet.

His favorite cookies were oatmeal raisin. Mom and Grandma would make dozens every Christmas and he would practically eat his weight in them.

He was a big man overall, but his hands were one of the first things people noticed about him. They were practically baseball mitts. But Grandma’s slender hands fit into his just perfectly, and his big arms gave the best hugs.

There is so much more I want to tell you. And I will. I will tell you all my stories so that one day you can tell your kids. Mommy is so sorry that you didn’t get to grow up with Grandpa around, but I want you to know that he is still here. He’s in me and he’s in you. I’m always happy to talk about him with you.