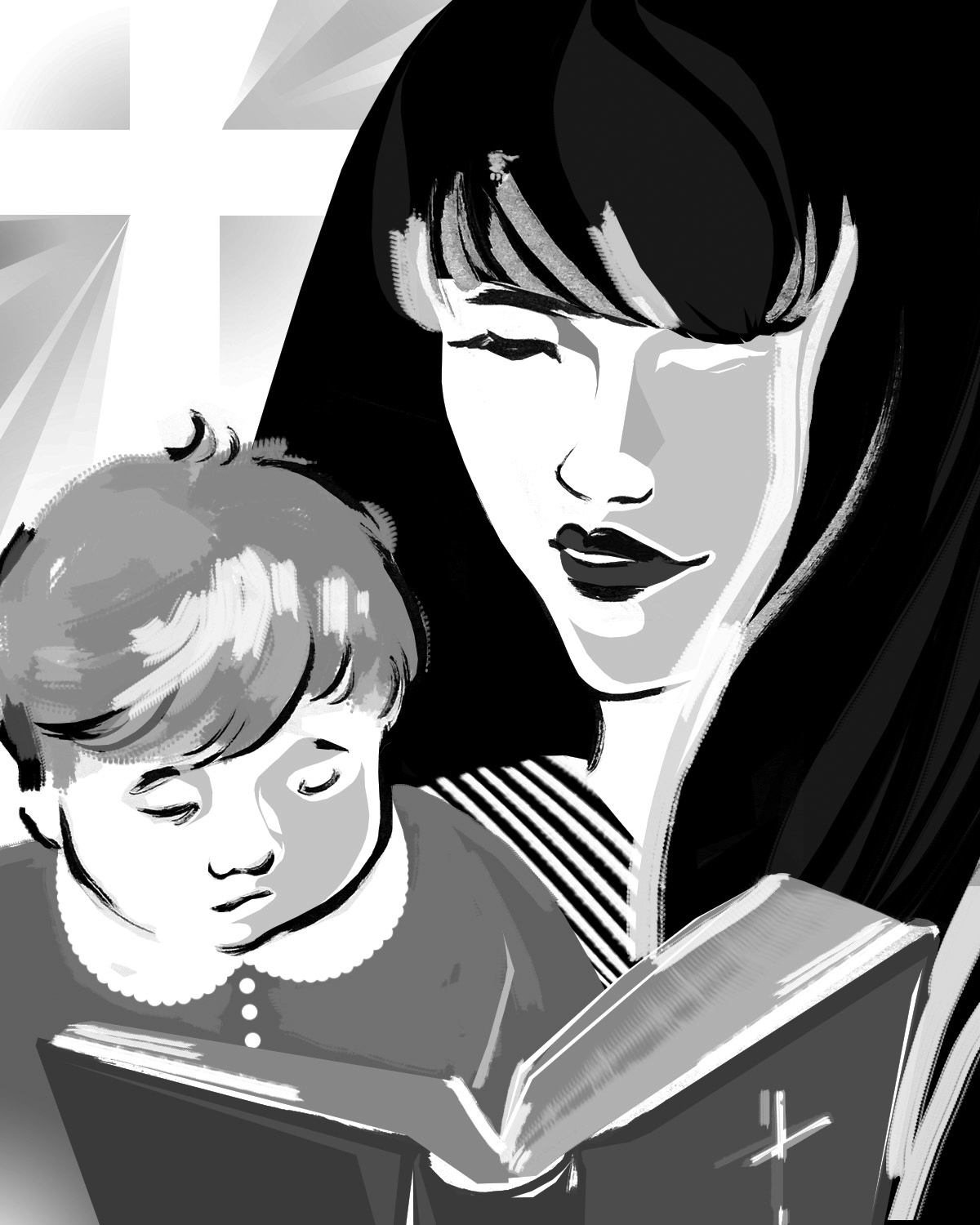 SPIRIT IN THE SKY

I was born and raised in the Deep South, so it probably isn’t surprising that I was raised religious. My family was Southern Baptist of the relatively devout variety. I was in church every Sunday morning, every Sunday night, every Wednesday night, and sometimes on Monday or Tuesday night too (for prayer meetings or community visitation), from birth until the day I left home at 18.

Unlike many of my peers, though, I wasn’t browbeaten by Christianity or by parents who were overly rigid or hypocritical. My parents were always honest with us about their shortcomings, but also encouraged us to aim higher and be better. When we inevitably did boneheaded things—as teenagers are want to do—they disciplined us, but they also showed us grace.

I was lucky enough to have a very insightful youth minister in my life as well. When I was filled with doubt after the death of my grandfather, I was reprimanded by our church’s lead pastor at the time. He told me that my questioning God was just Satan working in my heart. Seriously. He said that to me—a 15 year-old in the throes of mourning and pain. When I spoke to my youth minister, though, he told me that belief unquestioned isn’t really belief at all. He encouraged me to lean into those questions and pray about the answers.

Now, all of this is not to say that I didn’t see problems within the evangelical community I was raised in. It was incredibly exclusionary, and being in small town south Alabama, the church had its fair share of racists. Then there were the adults who were engaged in extramarital affairs, all the while preaching at the youth group that “True Love Waits” or some other platitude that was a variation of “the do as I say, not as I do” trope. Homosexual relationships were demonized. I was essentially told that you can’t be Christian if you’re not voting a straight Republican ticket. There was zero gray area in the discussion of abortion—“murder is murder,” they said, while also cheering the death penalty.

So yeah, it wasn’t all roses and sunshine, but it wasn’t the traumatic experience many of my peers recall from their youth. So when it came time to talk about religion as it pertained to my son, I was understandably torn.

Growing up, everything I knew about the Catholic faith was gleaned from television and movies. My mom liked to watch the midnight mass on Christmas Eve for its pomp and grandeur, but old school Baptists essentially treat Catholicism like a polytheistic religion. So you can imagine their reservations when I began dating a guy who had been raised Roman Catholic.

I think my mom always assumed I would convert, but I’ve never been drawn to the Catholic church, due to the large number of systemic problems within it. As it turned out, my husband felt as disconnected from the faith of his youth as I did from mine. It’s not uncommon for kids who were raised religious to “stray” during their early 20s. It’s almost expected, really.

When we were planning our wedding, we briefly considered finding a non-religious officiant, but that didn’t feel right to us. While neither of us felt at home in the denominations of our youth, we both still felt compelled to seal our marriage in a religious capacity. One of our dear friends, Matt, happens to be an Episcopal priest and he did us the honor of joining us in marriage. For what it’s worth, the ceremony was beautiful and my 92-year-old, dyed-in-the-wool Southern Baptist grandmother loved it (even all the Catholic-y bits).

We had visited a local Episcopal church (St. Anna’s) a few times before our wedding on the recommendation of a friend; and following our pre-wedding counseling with Matt, we started discussing in earnest the possibility of finding a church to call home. Everything I knew about the Episcopal church was about how it sat in relation to the Catholic church. I had always heard it jokingly called “Catholic Lite,” but saying that to an Episcopal priest is a really good way to get fussed at. As I was told, “There’s nothing ‘lite’ about our faith!”

Throughout my pregnancy, we visited St. Anna’s occasionally, each time feeling warmly welcomed and encouraged by the message. We talked about how once things “settled down” after the baby came, we’d visit a few other churches and make a decision. I could not have anticipated how very unsettled our lives would be in the months to come.

The details of what comes after death are foggy at best, even for the most devout believers. There is no playbook for the afterlife. But I found comfort in going to mass every Sunday and whispering my father’s name during the prayer for the departed. Something about reconnecting to the faith he raised me in—albeit in a very different denomination—helped me feel not so far away from him.

For those who don’t believe in God, death is often seen as the end. I have never, even in my furthest wanderings from faith, been able to believe or accept that. I respect that people do, but I would also hope they’d respect that I don’t. I’ve actually had people tell me—I suppose in an attempt to comfort me—that I should accept that my father is nothingness now. I’ll say this: no matter where you fall on the spectrum of religious belief, telling other people their faith (or lack thereof) is meaningless because it makes you feel superior or more intelligent is a pretty lousy way to go through life.

While we intended to visit other churches, we felt so at home at St. Anna’s that we didn’t feel the need to search anymore. We chose to take a 12-week course, meeting with a small group led by Father Bill Terry to discuss the history and life of the Episcopal faith. It was a chance to learn more about what the church believes and what the core mission of St. Anna’s truly is.

At the end of last summer, the class concluded. I was confirmed by the bishop and brought into fellowship with the Episcopal church. My husband was “received” by the church, which is all he needed to do since he had already been confirmed in a Catholic church. Thus began our journey as Episcopalians.

We have been members in regular attendance at St. Anna’s for just under a year now. I help with Gracious Goodies, the group that provides snacks after Sunday mass. I also joined the Altar Guild and got into the rotation as a reader—polishing chalices and reciting Psalms. My husband joined the St. Joseph’s Guild, which helps keep up the church via small repairs. Emmett spends every Sunday morning hanging out with Nicole—the amazing angel of a woman who runs Nana Anna’s Nursery—and he adores her.

We have slowly reintegrated ourselves into a walk of faith. That’s not to say we don’t still have doubts and questions. But the Episcopal church welcomes those challenges. It encourages deep thought and wrestling with the meaning of things. It sees faith as a journey rather than a destination. It strives to marry scripture with tradition and reason (known as “the three-legged stool”) when approaching any question of faith.

It is also a faith that welcomes all the children of God. We sit in mass every Sunday alongside other white people, young and old; but unlike any other church I’ve ever attended, we also sit alongside people of color, gay people, and homeless people. We are all one body, because we share one bread, one cup (quite literally—St. Anna’s practices common cup communion).

We chose to return to the church because we both felt drawn to giving faith another shot. We knew we had a child on the way and we remembered the positive things that emerged from our parents choosing to raise us in church. We hoped to impart the best of those lessons to our child too.

The mass at St. Anna’s is beautiful and elaborate (it’s an Anglo-Catholic church, which means the ceremony is very “high” church, and includes bells and incense), but that’s not what makes it our ideal church. That comes in its works. Whether it is the ministry that weekly sees to the distribution of clothing, toiletries, and food to the homeless people under the Claiborne overpass, or the after-school program that provides at-risk kids with nourishing meals, education, and extracurricular opportunities, St. Anna’s is always working.

There are no large endowments funding the church. There are a lot of leaky, creaky bits all over the building. But at its heart, St. Anna’s is the walking, talking love of God in action. Our motto is, “All are welcomed; none are shunned” and I’ve found this to be true. Wherever you are in your faith journey and whatever it is you’re struggling with, you can find rest there.

I was very honored to have Father Bill baptize Emmett at St. Anna’s this past February. In a mass dedicated to the memory of my father, we committed to raise our son in the Christian faith. To us, that means that we will raise him to be a helper. We will teach him to care for others and to fight for what is right in a world that perversely prioritizes money, power, and greed. We will teach him to walk in love, as Christ loved us. And hopefully he can help show those who have been hurt by the church what it really means to be Christ-like.