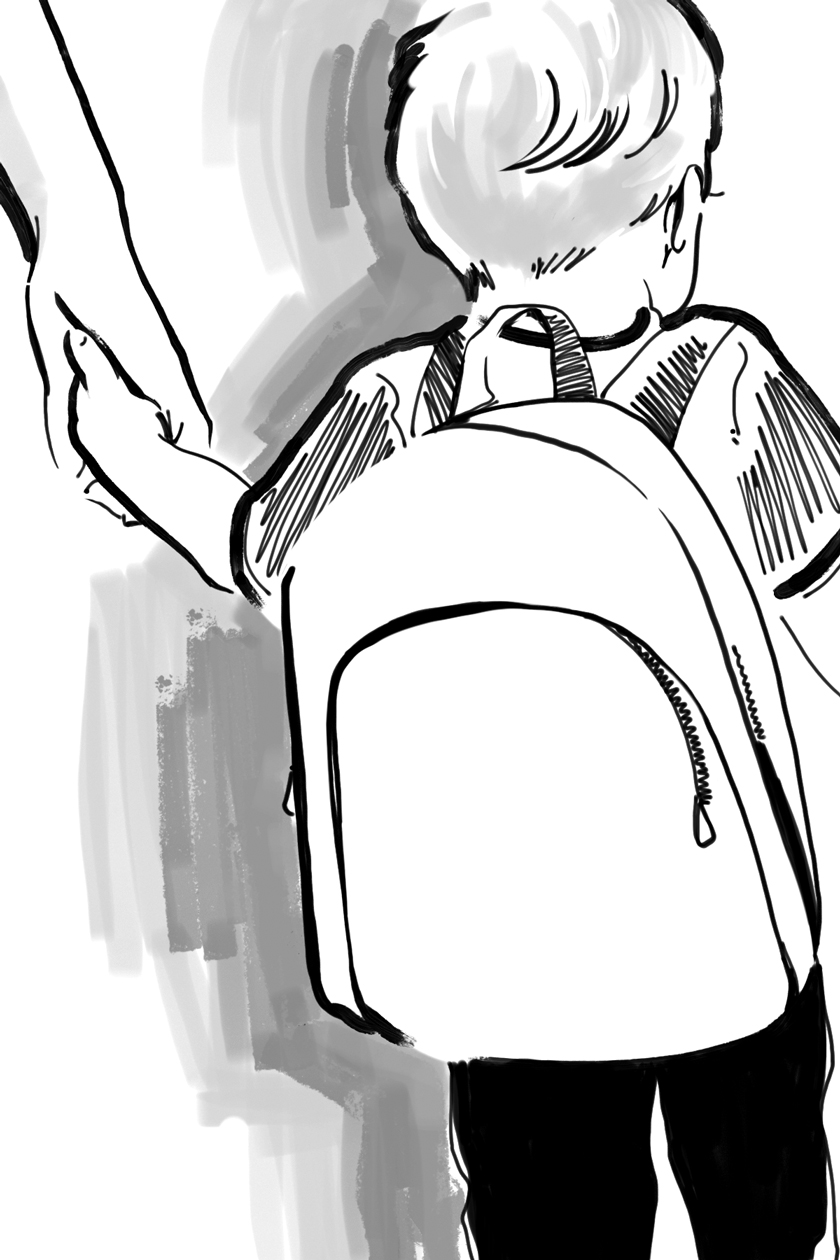 As we barrel towards our son Emmett’s second birthday, my husband John and I are deep in the glorious weeds of toddler parenting. This stage, we’re finding, is full of staggering emotions. Sometimes this comes in the form of frustration and helplessness over a meltdown that seemed to have no trigger. Or exhaustion after a day of nonstop movement. But more often, it comes cloaked in amazement. Watching our child develop such a strong and unique personality is truly one of the greatest joys we’ve experienced in our lives.

Very early on, Emmett showed us that autonomy is paramount for him. The ability to influence and control his environment and his place in that environment was the largest factor that affected him. Everything from his general mood down to his appetite and his sleep was impacted by whether or not he felt in control.

In my quest to read as many resources about parenting as I could, I discovered the endless, different frameworks and methods people use to approach questions of early childhood development. There’s Waldorf and Reggio Emilia, Attachment Parenting, and Free-Range Parenting. They all had points that appealed to me, but I didn’t feel like any of them truly spoke fully to who my son was—that is, until I stumbled upon the work of an Italian physician from the late 1800s.

I’d be lying if I said I had never heard the word “Montessori” before I became a mother, but I honestly had very little idea what it meant. I just assumed it was another fancy way to separate kids based on their parents’ finances and some perceived sense of giftedness or entitlement. But in reality, Maria Montessori’s earliest work was done with mentally disabled children, and her first opportunity to apply the methods she developed through that work was with children from low-income families.

Her driving belief was that children are capable of so much more than we realize. That our job is not to turn them into who they’re going to be, but rather support them in finding their way there. That with a thoughtfully prepared environment and just the right amount of assistance, any child can thrive, because they possess the natural abilities and initiative to do so. Hence Montessori is known as a child-led or child-focused approach.

Maria Montessori developed this method through countless hours of observation. She watched infants and toddlers and noted that without any real adult intervention, they were motivated intrinsically to gain knowledge and mastery of things. Montessori is all about respecting the child as a capable individual with their own drives and needs. It creates a purposeful space for us to interact with children that doesn’t infantilize them or demand things of them if they’re not ready.

The more I learned about the Montessori Method, the more I realized that we had already been sort of doing it. What felt natural to us was to find any and every way for Emmett to be independent. He wanted to brush his own teeth, so we let him. He wanted to pick which diaper to wear, so we let him. He resented using a baby fork, so we gave him the smallest real one we could find in our drawer.

And little by little, he went from being fussy and frustrated, to being confident and happy. Seeing how those steps improved his experience, we were inspired to look further into what Montessori could do for him. As luck would have it, the universe dropped a gift in our laps at that exact moment.

We were lucky to find amazing nursery care for Emmett on a part-time basis when he was 14 months old. This allowed me two full days a week to focus on my freelance writing work, and it helped him come out of his shell and learn to socialize with others. We were still living on the East Bank at the time and his school, Nurture Nursery, was a quick ten minute drive away.

The teachers were so loving and kind, and the environment lived up to its name as a truly a nurturing, supportive space. Emmett flourished so well there that when we bought a house on the West Bank, I spent two months continuing to drive there and back twice a week just to keep him in that environment.

We had zero intentions of moving him to another school, even though many people told us we could easily find a more convenient, cheaper Mother’s Day Out program on the West Bank. The benefits he was receiving at Nurture Nursery made the commute worth it for us, but I would be lying if I said it wasn’t taxing. We were burning through twice as much gas for the car as we had before the move, and the hour round-trip for drop-off and pick-up was really cutting into my productive work time.

When I saw a post about a new Montessori preschool opening in Algiers Point, I shrugged it off at first. I felt a real sense of commitment to our nursery and I knew how happy Emmett was there. But the more I thought about it, the more it felt like kismet. I had been digging into all this literature about the benefits of Montessori and it seemed like the pedagogy spoke directly to my son’s needs. So I reluctantly emailed the director to discuss a “maybe one day” switch.

A week or two passed and I emailed back and forth with the director, progressively feeling more and more like I was being drawn to make this move. We set up a tour and within ten minutes of being in the space, the decision was clear. Emmett was in love. Everything had been so purposefully prepared for little people and he seemed to walk in and be immediately at home.

I felt very torn about pulling my son from a nursery full of amazing people where I knew he was being so well taken care of. They had given me relief and space in a time when I needed it so very badly, and for that I will forever be grateful. But once we made the leap, I was confident it had been the right thing to do.

From his very first day at Algiers Point Montessori, Emmett never cried at drop-off. At pick-up, he’s always happy to see me, but he doesn’t rush into my arms either. He smiles and waves and then continues working with whatever materials he was engrossed in before I arrived. He is relaxed, confident, and happy.

Part of that is probably just his age, and the fact that he had the benefit of getting used to daycare at an early age. But I also think the kind of environment created by using the Montessori approach is one that facilitates calm and peace in a unique way, and it has resulted in him truly blossoming.

Much like every other aspect of parenting I’ve discovered thus far, there are people who go way hard in the world of Montessori. It’s difficult to say what exactly is “true” Montessori, since  Dr. Montessori has been dead for nearly 70 years and we have no idea what her take on current parenting trends might be. But believe me—that doesn’t stop people on the internet from arguing about it.

There are plenty of criticisms of this method: that it makes children grow up too fast, that it lacks discipline and allows the child to run things, that it’s only for wealthy people, that it creates children who don’t recognize authority figures, that it doesn’t prepare kids for the real world.

By the same token, hardline Montessorians have their own thoughts about the predominant parenting culture of today: that it creates children who are coddled and reliant on adults for everything, that children are addicted to screens and branded cartoon characters, that schooling is more focused on tests and grades than actual acquisition of knowledge, and that forcing children to live and work within rigid adult frameworks stifles their very soul.

Me? I land somewhere in the middle. I once dubbed our family crunchy-adjacent, and I like to think we’ve now become Montessori-ish as well. I love the parts of this method that encourage independence, but I’m also not all-in on it. I love the idea of freedom within limits and that’s what we’re leaning into.

I’m not going to deprive my child of books that feature talking animals just because Montessori says that fantasy isn’t necessary. I’m not taking my kid out of his crib and moving him to a floor bed because the method insists that’s important. It took us a full year to get him to even think of sleeping through the night, so until he starts climbing out of it, you can pry that crib from my cold dead hands.

Montessori encourages practical life skills like washing hands and cleaning up spills. I love that, and my kid loves feeling like he’s helping out. So we sort laundry together and I let him press the start button on the dryer. I let him hand me utensils when we unload the dishwasher. He carries cups of water from the bathroom to the dining room to fill up the dogs’ water bowls every morning.

He can stand on a chair and help me prepare dinner, but I’m not giving him a knife and letting him chop vegetables at 20 months old (yes, people do this). My husband and I both drink our water from stainless steel canteens, so I’m not giving my toddler a glass tumbler to carry around.

I may not necessarily be a “real” Montessori mom, but I’m OK with that. The benefits I have already seen from semi-implementing this method with Emmett have been tangible. He loves going to school, and his increased confidence has translated into an explosion of skills. He’s become quite verbal, and is showing signs of readiness for potty learning. Tune in next month to see how that’s going!

If you’re interested in how Montessori might be able to help your child uncover their potential, here are a few resources I’ve found helpful.

Montessori Guide
montessoriguide.org
A site for Montessori professionals to deepen their practice. Helped me get a handle on the more scientific aspects of the method.

Montessori 101
facebook.com/groups/montessori101
Facebook group run by Nicole Kavanugh and Aubrey Hargis; also a good spot for crowdsourcing ideas and getting inspiration for cultivating Montessori-friendly spaces in your home.

If you’re hoping to get your child involved with Montessori-inspired education in New Orleans, here are some great options:

Audubon Charter School
auduboncharter.com
Public charter school located Uptown with Montessori-focused Pre-K 3 through 8th grade classes. Admission is only available through the OneApp program and this is the only officially Montessori-certified school in the parish.

Harriet Tubman Charter School
tubmancharterschool.org
Public charter school in Algiers on the West Bank. Their kindergarten, first, and second grade program is Montessori-inspired and sees all three ages combined in a unified classroom. Admission is only available through the OneApp program.