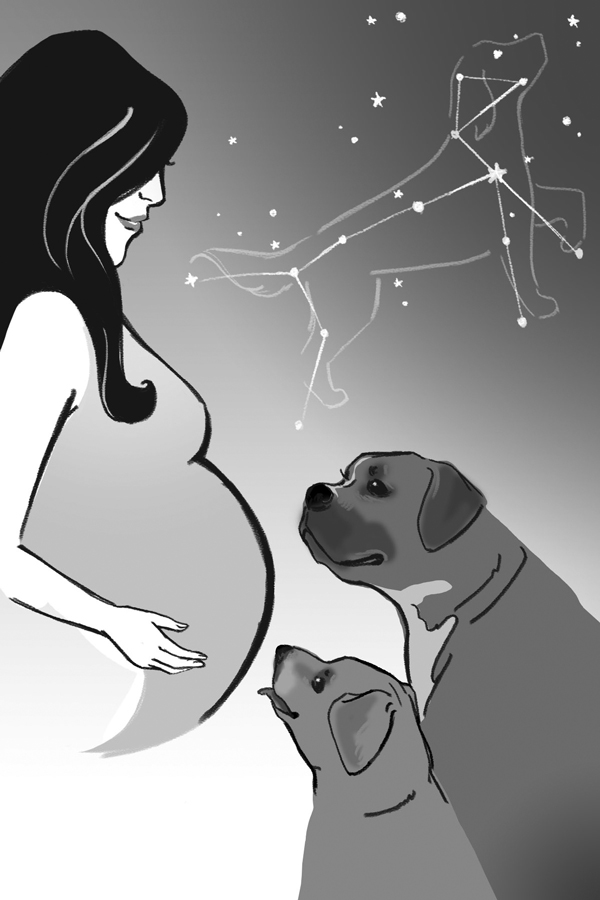 GONE TO THE DOGS

Welcome back to the final countdown! As this issue debuts, I’m hitting the 36 week mark of my pregnancy—a mere four weeks away from the expected delivery date. Since the last installment, I’ve seen two physical therapists and been put on a regimen to mitigate the pelvic pain that started flaring up as I entered my third trimester.

It was confirmed that one side of my pelvis had tilted backwards as relaxin flooded my system, leaving me a bit of a jangly mess (see last month’s column). I’m now wearing a nifty belt across my hips that quite literally serves to hold my pelvis together as I walk. It also appears I had some strain in the round ligament on that side. A combination of targeted exercises and massage seems to have it under control though, and I’ve never been more grateful to have such resources at my disposal!

This month, I’d like to talk about getting ready for the baby. Everyone knows about the nesting urge and it’s expected that parents-to-be will kick into high gear on house cleaning and reorganization as the due date approaches. And we’re doing all that (though not nearly fast enough for my liking, if I’m telling the truth). But the second huge component of getting our family ready for this big change is a little hairier.

I love my dogs with a ferocity that borders on insanity. If I could take them everywhere with me, I would. I genuinely like spending time with them that much. They are, essentially, our kids and our lives in many ways revolve around them.

We’ve been told over and over again during my pregnancy that once the baby arrives, the dogs will suddenly stop mattering to us. As someone who has worked in animal rescue for 15 years, this statement makes me cringe. I can’t tell you how many pets I’ve seen surrendered to the shelter because owners were “making space for baby” or some such nonsense.

Every pet owner will have different challenges when preparing their furry friends for a new baby, but the cases in which the situation is truly incompatible are few and far between. It will take work and it will take time, but it can be done!

A TAIL OF TWO BLOCKHEADS

We adopted Vito from the SPCA nine years ago after he was brought in by a good Samaritan, having been found bloodied and bruised on a golf course. He was aged at “around 2 years old” and had the perfect personality for me—mostly laid back with pops of energy and an affinity for snuggles. We had him DNA tested a few years back and the results came back as an even split of four breeds: Labrador Retriever, Staffordshire Terrier, Chinese Shar-Pei, and Yorkshire Terrier. We don’t know his exact age of course, but we estimate that he’s somewhere around 10 to 13 years-old now. With age, he has certainly become more needy and, in many ways, more anxious. He becomes virtually incapacitated when it storms and is now also suffering from tremors in his limbs.

Lyra also came from the SPCA, about five years ago. She is a 50/50 mix of American Pit Bull Terrier and Boxer and was relinquished by a woman who is a regular at the shelter. She has two purebred “show” dogs that she refuses to have sterilized, so when they inevitably have another round of puppies, any that she can’t sell get dumped at the shelter. In her earlier years, Lyra had some serious issues with dog-aggression, but she’s mellowed significantly with age (she’s 6 now). She still barks at the wind and her head is filled largely with cotton candy and rainbows, but at her core, she is a sweet and gentle soul. While largely agreeable, she is also very physically affectionate and does not seem to comprehend her size.

I’ve anticipated for some time how my dogs would react to us having a child. And thus far, those assumptions have born themselves out. Vito is anxious around children. He’s made uncomfortable when they raise their voices or make sudden movements. He’s never shown any aggression towards a child, but instead searches for a hiding spot to avoid interaction. Lyra, on the other hand, would gladly nap in a pile of children if it meant she got to lick their little fingers and toes and smell their sweet noggins. As you can see, a one-size-fits-all approach to baby prep isn’t going to work in my house.

Courtney Bayer is a Canine Behavior Trainer with the LA-SPCA and she helps to spearhead their community training initiatives. I spoke with her about some of the most common pitfalls and misconceptions about integrating a baby into your dog’s life. The worst mistake you can make? Waiting until the last minute. The second behind that? Thinking that blocking off the nursery will solve everything. “People tend to think all the ‘baby stuff’ is going to happen in a specific area, like the nursery, and they don’t understand that they will also spend time with the baby in the kitchen and normal living areas,” Bayer says. “So that baby paraphernalia will be ALL OVER the house.”

I began a few months ago trying to get the dogs used to the idea of a baby. I felt a little nutty at first, but I played audio tracks of a baby crying. I started slow and then ramped up. Vito, as I expected, got immediately nervous and began whining and pacing. I simply gave him reassuring pats and went about my normal business. Lyra mostly just stared quizzically at my laptop. Eventually, I could play the track at a serious volume for ten solid minutes and neither dog paid any attention. We can of course hope that sustained wailing won’t be a regular reality in our lives, but best to prepare for the worst, right?

Another easy tripping spot for pups is that baby toys can seem a lot like dog toys. And with all the sensory-focused toys on the market, you can bet your baby will have plenty of things that light up and make noise, all of which is grade-A dog bait. “Baby stuff is very enticing to dogs,” Bayer says. “I always make sure new parents take things out of the boxes, put batteries in them and get the dog used to the lights, noises, and smells right away. Don’t stick the Baby Einstein walker in the closet until baby is old enough to use it!”

Other pre-arrival prep items that we’re planning to do include walking the dogs with the stroller (yes, an empty stroller) to get them accustomed to that addition, and to have them ride in the car with the car seat installed. We began, on our last trip, putting them in the cargo area of my SUV instead of the back seat, where they normally ride. There was some initial confusion and fussing, but they quickly adapted. If your dog isn’t as eager to do so, there exists mesh and/or metal barriers that you can put between the cargo hold and the back seat to keep your pup from trying to launch himself over the gap, keeping both baby and dog safe!

Speaking of changing routines, there is a line of thought that says you should essentially start ignoring your dog before the baby arrives in order to prepare them for the steep decrease in attention they’re likely to get during the newborn stage. While I wouldn’t go so far as to validate a complete dismissal of your pet, there is something to be said for pulling back a bit. “We don’t pay attention to how much we give our dogs eye contact or just a brief pat on the head as they pass us in the hallway,” Bayer says. “Try to be conscious of that, and start phasing it out for a while.” Otherwise, you may be faced with a dog who acts out and who sees the baby as the direct reason for the sudden decrease in attention.

We also plan to take two small throw blankets to the hospital with us and make sure to use them while holding the baby. My husband will then bring those home and put them in the dogs’ crates, so they can begin learning to recognize the smell of the baby and to link it to our scents as well, even before we actually bring the baby into our home. Overall, positive association is the name of the game! “Once the baby is home, try to pay more attention to the dog when the baby is around, so the dog associates him or her with good things,” Bayer says.

Don’t get discouraged if acclimation doesn’t happen right away. Focus on taking the best care of everyone that you can and don’t be afraid to ask for help. “Hire a trainer, have someone on-call to take the dog for a walk, or board him for a few days,” Bayer says. “Don’t feel bad about keeping the dog separated from the child if you need to. Adjustment can take a week or a year.”

Bayer also recommends associating time with the baby with highly prized food treats (think hot dogs, cheese, peanut butter, meats etc.) to reinforce that the baby equals good things. Stick with it and eventually your furry friend should get on board. “Cats and dogs and other mammals all learn by association,” she says. “Pair the baby stuff with the best food treats for your animals and make sure everyone has their own personal space.”

If you’re still struggling, know that there are resources out there that can help you both care for your baby and not give up your pets. “Familypaws.com has a hotline and is one of the best website/resources on the internet,” Bayer says. “Locally, we offer private training and have a network of behavior and training specialists that can help families achieve their goals.”

We understand that our biggest challenges personally will be mitigating Vito’s anxiety about this strange new addition and monitoring Lyra closely to ensure that she gives the baby ample space and doesn’t accidentally overpower it with her size. But I’m confident that we can make it work in a way that doesn’t shortchange any of our children, whether they’ve got two legs or four.

If you’re struggling with finding a way to make your life work with both pets and a baby, please reach out. You can email me and I’m happy to connect you with any resources I can. Also, the next installment of the LA-SPCA’s “Dogs & Babies” course for expectant parents will take place on Saturday, December 2nd. For more information and registration, visit la-spca.org.