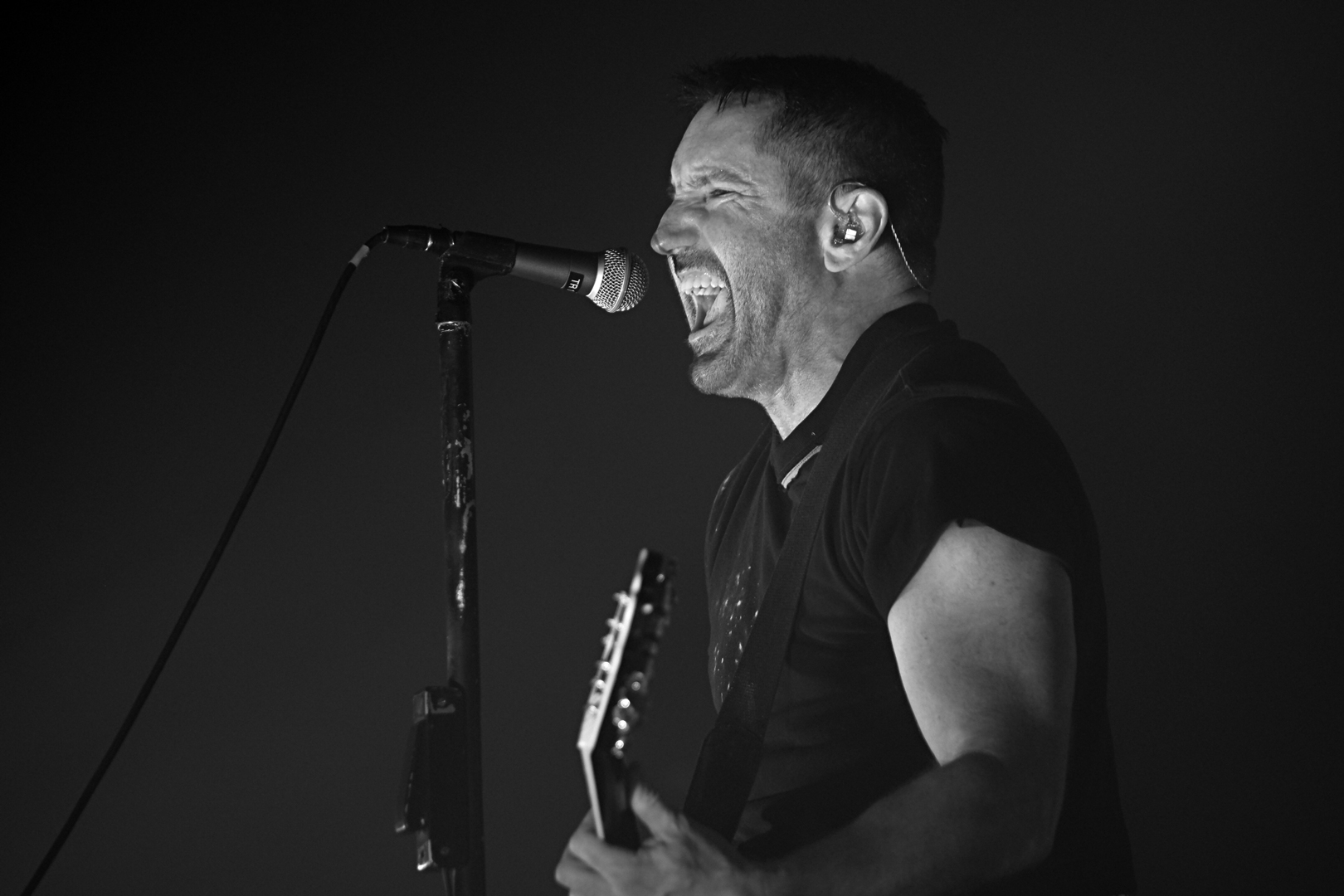 Trent Reznor used to be a scary guy, at least in public. While he was reportedly a well-adjusted child and teenager in 1970s rural Pennsylvania, his early records paint a picture of a distinctly disturbed individual. In the mid-‘90s, when Nine Inch Nails reached peak popularity, he grew into his dark lyrics, turning to severe drug use to deal with sudden celebrity. His onstage antics increased in depravity, from slathering himself in corn starch and destroying his guitar to actual episodes of violent self-harm. During these years, when he wasn’t on tour or recording at Le Pig (the studio he built in the L.A. home where the 1969 Manson Family murders took place), he lived in New Orleans.

Reznor’s brand of grim-faced, industrial nihilism inspired and encapsulated a generation of leather-clad goths now headbanging into their 40s. These Children of Korn were out in force for NIN’s three-day stint at the Saenger Theatre (the longest stop on their Cold and Black and Infinite tour, other than four closing dates at L.A.’s Palladium), many of them bringing their own offspring along for the ride. In the bar line, I eavesdropped on a conversation: “So y’all are lawyers now?” a woman in a Tool t-shirt asked two portly, gray-haired men, one of whom wore a wallet chain.

My generation of angsty rock fans has experienced Reznor as more of an elder statesman than a menace to the status quo. He sobered up shortly after the millennium change and subsequently left New Orleans and his Magazine Street recording spot, Nothing Studios, to live in L.A. full-time. Since then, he’s become a husband and a father of four. He’s in excellent physical shape and has transubstantiated his anger at the system into an entrepreneurial drive. He was the Chief Creative Officer of the failed Beats Electronics subscription service (codenamed “Project Daisy”) and played a similar role in the 2015 launch of Apple Music. After leaving Interscope in 2007 and publicly criticizing the exploitative practices of the dying major labels, he went independent for a while and even fan-sourced GarageBand remixes of his music. But in 2012, he signed with Columbia Records and has since stayed put.

NIN was preceded Sunday by industrial house DJ Daniel Avery (replacing synth-pop duo Kite Base, who opened the first two shows) and beloved Scottish shoegazers The Jesus and Mary Chain, who played a relaxed, professional set comprised of hits that stood on their own without fanfare. Reznor and his four-piece backing band took the opposite approach, entering the Saenger stage to blinding strobe lights as “Pinion,” a track from his 1992 Broken EP, blasted through the theater. They started off their set with “Mr. Self-Destruct” and “Piggy,” the opening tracks from The Downward Spiral (1994), NIN’s most commercially successful album. Both tracks drip with angst and anger on the record, but no matter how intensely Reznor eyed the crowd or how deeply he crouched at the mic stand, there was a disconnect between those emotions and the Saenger’s setting. It’s hard to feel united in hate in that ornate playhouse, beneath the star-spangled ceiling and gaze of Greek statues that line the auditorium’s upper rim.

Still, Reznor managed to put on a captivating show. Age and clean living may have tamed his revolutionary spirit, but his music remains a force, and he’s had plenty of practice performing it. His touring band, which has gone through multiple personnel changes throughout the years, is in excellent form. It currently includes longtime collaborator and multi-instrumentalist Alessandro Cortini, guitar virtuoso Robin Finck, and drum phenom Ilan Rubin who, at 30, is the youngest member of the group by more than a decade. By the end of the night, all of them (Reznor included) had picked up at least three instruments.

The only exception was Atticus Ross who, as of 2016, is the first and only musician to join Reznor as an official (recording) member of NIN. Before that, he had already collaborated with Reznor extensively, playing in his live band for years and, more recently, working with him on the original score of three David Fincher films, including The Social Network (2010), for which the pair won both the Academy Award and the Golden Globe for Best Original Score. Ross made himself scarce Sunday, hiding in plain sight behind the boards while the rest of the band darted across the stage, changing roles at a head-spinning pace.

The setlist was completely different on each night of NIN’s New Orleans mini-residency—a testament to the band’s skill and Reznor’s commitment to the diehard fans who bought tickets to all three shows. The only tracks that stayed in place were “Head Like a Hole,” which closed the regular set, and “Hurt” (NIN’s most recognizable song), which closed the encore. Notably missing from Sunday’s set was “Closer,” which remains in contention with “The Whisper Song” for creepiest piece of music ever to grace the radio waves, but is nonetheless NIN’s second biggest hit. While Saturday listeners got to hear 53-year-old Reznor profess his desire to “fuck you like an animal,” Sunday patrons had to settle for watching him daydream about fucking “everyone in the world” (“I Do Not Want This”).

Some Reznor lyrics have not aged gracefully, but his musicianship has. The best moment of the night came about halfway through the show when he paid tribute to his late mentor, collaborator, and friend David Bowie. His quiet cover of “I Can’t Give Everything Away,” the closer on Bowie’s final album, Blackstar, morphed into a gorgeous take on “Subterraneans” (from 1977’s Low) on which Rubin played electric cello and Reznor played sax. Oftentimes, tributes to dead idols can feel saccharine and self-serving, but this one truly seemed to come from the heart, more so than any of the expensive theatrics that took center stage the rest of the evening. Reznor’s angst card may be all out of swipes, but his power as a frontman remains as strong as ever, when he uses it right.