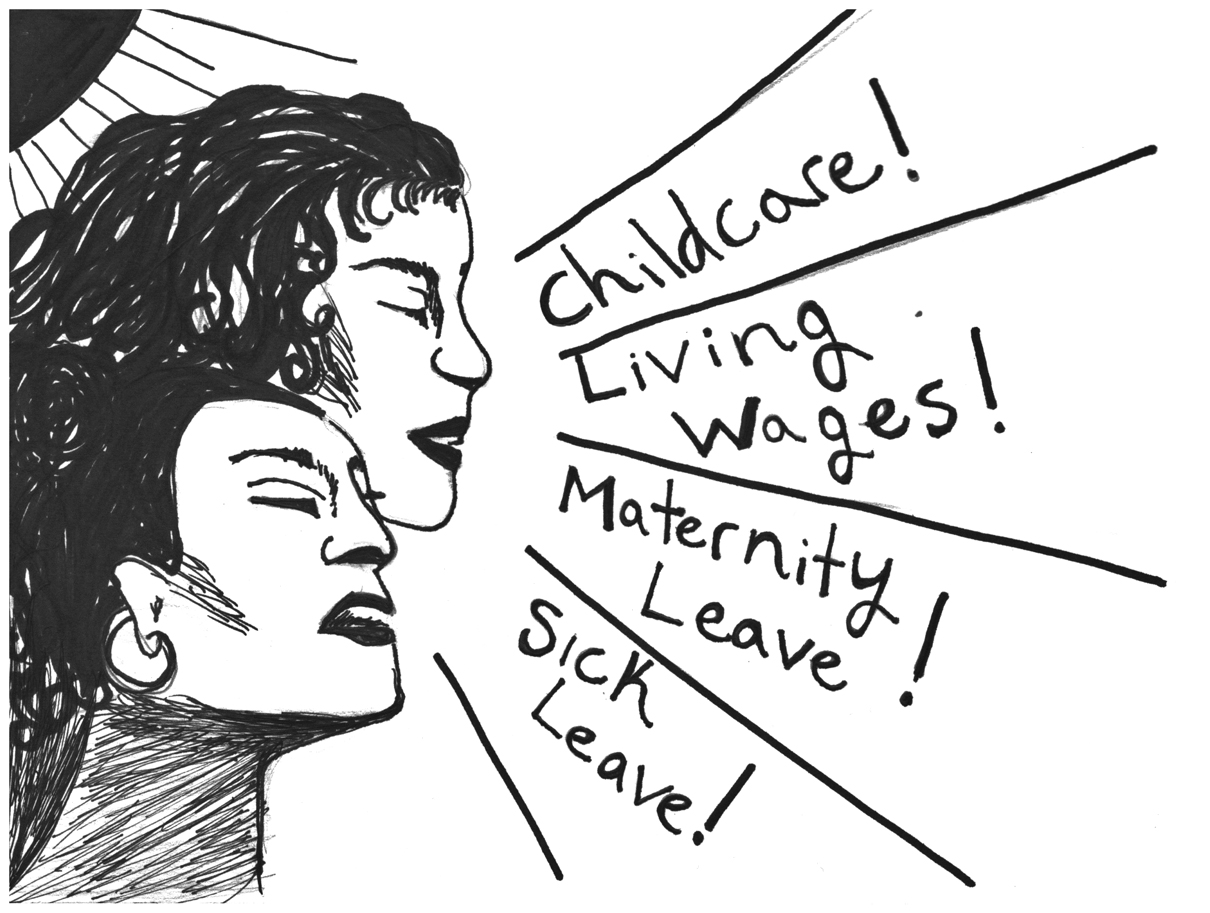 Since 2017, the New Orleans Hospitality Workers Alliance (NOHWA) has been building a movement to fight for workplace rights. Their efforts have culminated in a proposed city ordinance that would give the most basic rights to hospitality workers, such as paid sick days, 12 hour rest periods between shifts, and shift schedules received 14 days in advance. These are a few of the many demands of the ordinance. In order to bring further attention to hospitality workers’ plight, the NOHWA and the Peoples’ Assembly have organized a call to action—on March 16 for International Working Women’s Day—to honor women hospitality workers as well as bring attention to hotel tax revenue allocation. A majority of hotel taxes (75%) are funneled into four tourism industry organizations: the Louisiana Stadium and Exposition District, the New Orleans Ernest N. Morial Convention Center, New Orleans and Company (formerly the New Orleans Convention and Visitors Bureau), and the New Orleans Tourism Marketing Corporation. Last May the NOHWA gathered at the monthly Tourism Marketing Corporation meeting to demand the hotel tax revenue be returned to the people for such things as free childcare centers, fully funded early education, and health care coverage for all hospitality workers. To better understand the importance of NOWHA, the Peoples’ Assembly, International Working Women’s Day, and hotel tax revenue, I sat down with Ashlee Pintos (Peoples’ Assembly) and Meg Maloney (NOHWA) to talk about these issues.

What is the history of International Working Women’s day?

International Working Women’s Day was established to mark the anniversary of when young women garment workers in New York City went on strike for 13 weeks in what was called “The uprising of the 20,000” in 1909. This uprising sparked five years of revolt that transformed the garment industry. To honor this struggle, women’s rights organizer and socialist Clara Zetkin proposed IWWD at the international women’s conference in 1910. At this conference there were over 100 women delegates from 17 different countries. IWWD was created to draw the connection between the fight for workers’ power and the struggle against women’s oppression. Since, hundreds of millions of women around the world have participated in rallies and strikes for IWWD. What is also important to recognize is that this effort has not solely been women but people of all genders who support these causes.

Why was March 16 chosen instead of the annual celebration on March 8?

AP: Historically, the date of IWWD has not always been on March 8. While this is the date that is most nationally recognized, working women around the world have demonstrated on varying days throughout March. We decided to set our demonstration for March 16, which is a Saturday (as opposed to March 8, a Friday), to give ourselves the time to maximize outreach as well as guarantee that as many women as possible could be present that day. We chose this day specifically to create a platform for ourselves as working women and hospitality workers in New Orleans to guarantee that our voices are heard. This day has maintained its working class character in many places around the world, where working class women are the organizers, speakers, and strikers on this day. We want to see the same working class character of IWWD implemented here in New Orleans. It is our principled goal to give the mic to working class and poor women, verses giving it to upper middle class (predominantly white) women in power or politicians whose voices are often already heard.

Meg, can you talk more about the New Orleans Hospitality Workers Alliance?

Meg Maloney: The Hospitality Workers Alliance is an organization run by and for hospitality workers. We have long been fed up with our treatment: low pay, no sick leave, no maternity leave, no protection from racial or sexual harassment. Hospitality workers in this city generate over $8 billion a year for the state of Louisiana, yet we have little to no rights. We came together as a group in early 2017 to discuss how we felt: tired of watching friends and co-workers get fired for being pregnant or taking off for a family emergency, tired of working for weeks on end while sick, with no health insurance or sick leave. On this basis we began to organize as workers in our industry.

We in the alliance have made it our mission to reach out to other hospitality workers in New Orleans, to build solidarity in our workplaces, to create safe meeting spaces… letter deliveries, picketlines, marches, speak outs at city council, etc. We understand that only us hospitality workers will truly represent our interests in a city where those in power directly profit off of our labor and exploitation. The oppressive conditions are this way intentionally: it all equals high profits in the books of the uber rich business owners of the city. For this reason we’ve created our own media source by producing a monthly industry newsletter called Serve The People. If we are ever going to have the power that we deserve in our city and at our jobs, we need to spread an understanding of the tourism industry from our perspective: the worker’s perspective. We are all different in our specific circumstances. There is inequality among the workers in this industry—between different genders, different races, and different legal status. But the majority of us live in a similar reality: the reality of poverty. We use this newsletter to connect hospitality workers with an awareness of our shared struggles. We will spread this throughout the city, to as many workplaces as possible, to link the workers of New Orleans.

Who is the New Orleans Peoples’ Assembly?  What does the organization stand for?

AP: The Peoples’ Assembly is a mass organization of New Orleans workers that will fight the bosses [and] local government to demand better conditions: higher wages, affordable housing, improved public transportation, quality public education for our children, and affordable health care. The city budget of Orleans Parish designates 63% of $615 million dollars toward cops, jails, and reactive measures, while only allocating 3% of the budget to children and families, and 1% toward job development. The priorities of the city are clearly based on where the money is going. Moreover, the little that is designated for children, families, and job development is not necessarily for the kinds of programs that are accessible, sustainable, community based, or solution oriented.

So rather than complain about it, or give in to the powers that supposedly be, we organize toward solutions. The people have the real power. Our “Fight Back Manifesto” outlines 10 key issues in the city that we feel we must organize for and prioritize—of which the Hospitality Workers Alliance’s Bill of Rights is one. The “Fight Back Manifesto” is not intended to cover every single issue and instance of concern. It does address key areas that we collectively are affected by, and must organize for, as immediate priorities. As we achieve these demands, we will be in better position to expand our goals. We oppose and will resist what harms our communities, while building toward tangible solutions to allow the masses of working class people a chance to live lives that are healthy and whole. For any elected official or office holder, we call on you to support this program or move out of the way as an obstacle.

“[NOHWA] came together as a group in early 2017 to discuss how we felt: tired of watching friends and co-workers get fired for being pregnant or taking off for a family emergency, tired of working for weeks on end while sick, with no health insurance or sick leave.”

What inspired the two organizations to join forces to organize an International Working Women’s Day march?

MM: As mentioned previously, on the Peoples’ Assembly Fight Back Manifesto, #4 is the demand for the NOHWA Bill of Rights and Work Week Ordinance to be implemented. While the Peoples’ Assembly focuses on the working people of New Orleans as a whole, the NOHWA can be seen as a branch off of it that focuses solely on those in and affected by the hospitality industry. Since both organizations recognize that if the hospitality workers were to be uplifted and win some real concrete gains, it would benefit everybody. It is in our interest to support this effort. Furthermore, women’s issues are working class issues. To us, working together is an obvious and powerful decision.

Is there a particular theme for the march?

AP: Well, of course, the general theme is working class women and those who support them. But more specifically, we are focusing on the $180 million in tax money that is stolen from our budget yearly. The NOHWA has done a lot of work to uncover this issue and since our demonstration at the Tourism Marketing Corporation meeting last May, several politicians, such as [Mayor LaToya] Cantrell, have touched on this issue. Money generated through taxes such as the Hotel Occupancy tax and the Food and Beverage Tax does not go into our budget but rather goes into funds for big businesses and corporations to play around with. Since our organization has brought this to light, politicians like Cantrell have made soft attempts to get back a fraction of the money. For us, we demand all of it… We’re demanding the $180 million a year in stolen taxes go to: $20 million to fully fund all early childhood education; $50 million for sick, maternity leave, vacation pay, and a pension fund for hospitality workers; $50 million go into health coverage for all hospitality workers; $40 million go to fully funded, free, accessible child care centers; $20 million be used for infrastructure like fixing streets.

What are some of the ways working women can be involved in this work after the march?

MM: Every working class person in New Orleans as well as those who want to truly support our community are more than welcome to join the New Orleans Peoples’ Assembly and  Hospitality Workers Alliance in the streets on March 16th, as well as help organize other working women for the day. We particularly encourage hospitality workers to join us in the organizing leading up to the march, to be in the streets on March 16th, and to join the Hospitality Workers Alliance so we can build together collectively year round.

The International Working Women’s Day Call to Action will be Saturday, March 16 at 2 p.m., starting at Congo Square (701 N. Rampart Street). For more information on the The New Orleans Peoples’ Assembly, check out peoplesassemblyneworleans.org; for more info on the New Orleans Hospitality Workers Alliance, check out nohwa.org.