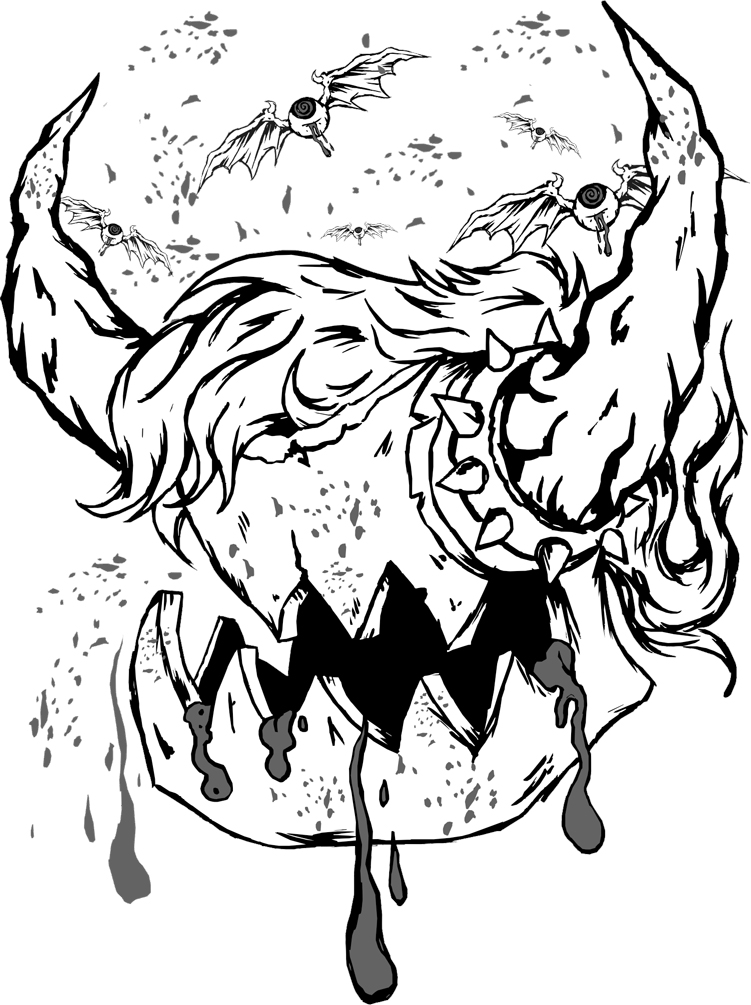 In the grand theatrical tradition of Screamin’ Jay Hawkins, Lord Sutch, and Alice Cooper, GWAR has been wreaking havoc since 1984. Like a combination of KISS and Gallagher, GWAR combines vile cheapness and messy interactions with an adoring crowd to put on an unparalleled concert. Within five years of each other, GWAR was nominated for a Grammy and featured on an episode of The Jerry Springer Show. Who else can make that claim to fame? You also won’t find another band that shreds to a song called “Meat Sandwich” while beheading the Pope. Even though the band’s lineup changes rather frequently, rhythm guitarist Balsac the Jaws of Death has been a character since the original lineup, and he is the longest-running consistent character since Oderus Urungus, their longtime leader, died in 2014. I was lucky enough—really lucky, because they are the first band I ever saw live—to chat with this alien creature via email, touching on topics as elegant as the story behind his costume, his hatred of all humankind, and how he would murder me if given the chance.

First off, the question that’s on everyone’s mind: Which celebrity on-stage murder are you the most proud of?
Really? That question is on everyone’s mind? Somehow I doubt your accuracy. In fact, I know beyond any doubt, that question was not on my mind until you placed it there, and I curse you for having done so. I don’t take pride in killing. Assigning such human attributes to the actions of gods is meaningless. Does the mighty lion feel proud when he slays the gazelle? No! There is no need for juvenile feelings. It is simply the order of things; your place on the food chain. You are worthless and weak, and we are GWAR. Therefore, you must die.

When will we have a deluxe Blu-ray release of your Grammy-nominated film Phallus in Wonderland?
Ah yes, thank you for asking about our new album instead of a film we made almost three decades ago. Our latest record chronicles our epic struggles over the past few years since we lost our leader, Oderus Urungus, to the foul fiend, death. It also tells of the apocalyptic War on GWAR that the human race has launched against us. And it will be out in October 2017.

What’s your favorite way to drown your minion-audiences: with a shitton of blood or semen?
My bodily fluids are far too valuable to waste on audiences, but Blothar is fond of using his four pronged bag of dicks to fill the pit with filth.

Why the bear-trap face?
The better to chomp your fucking head off, my dear. (That was a Little Red Riding Hood reference. I’m sorry, I know you’re not that well read.)

Given how divisive the country currently is, how soon will it be before GWAR enslaves us all and takes us to a Metal Wonderland?
Why in the name of fuck would we take you with us? Believe me, if I had a way back to Metal Metal Land, I would never befoul it with human filth.

You guys have ANOTHER record???
Why did you feel the need to capitalize “another”? Are you implying that we’ve put out too many records already? I’m starting to lose patience with you and your inane questions. If this interview were being conducted in person instead of through e-mail, this is the point where I would slowly impale you on my sword and enjoy the sweet music of you gargling the blood that flows into your throat as you struggle to take your dying breath.

You’re one of the longest-running creatures in the band, and you’ve co-written a ton of music. How will you challenge yourself over the NEXT 35 years?
What? How do you manage to continue to ask questions as the pool of your blood grows larger on the floor around you!?

At last year’s Riot Fest in Chicago, you skinned Donald Trump alive. Your band has also previously slain Barack Obama, and I personally witnessed the band murder Dubya. Is that the best you can do?!
I must quiet this voice that keeps echoing from beyond the grave! Your skull flattens beneath repeated blows from my cloven hoof. The satisfying splat as brain matter and bone fragment fly, staining the fur on powerful legs, finally brings silence. That is the best I can do.

GWAR will be performing at The Shrine on Airline (a.k.a. Zephyr Field) as part of the Vans Warped Tour on June 28th. For more info, check out gwar.net and vanswarpedtour.com.