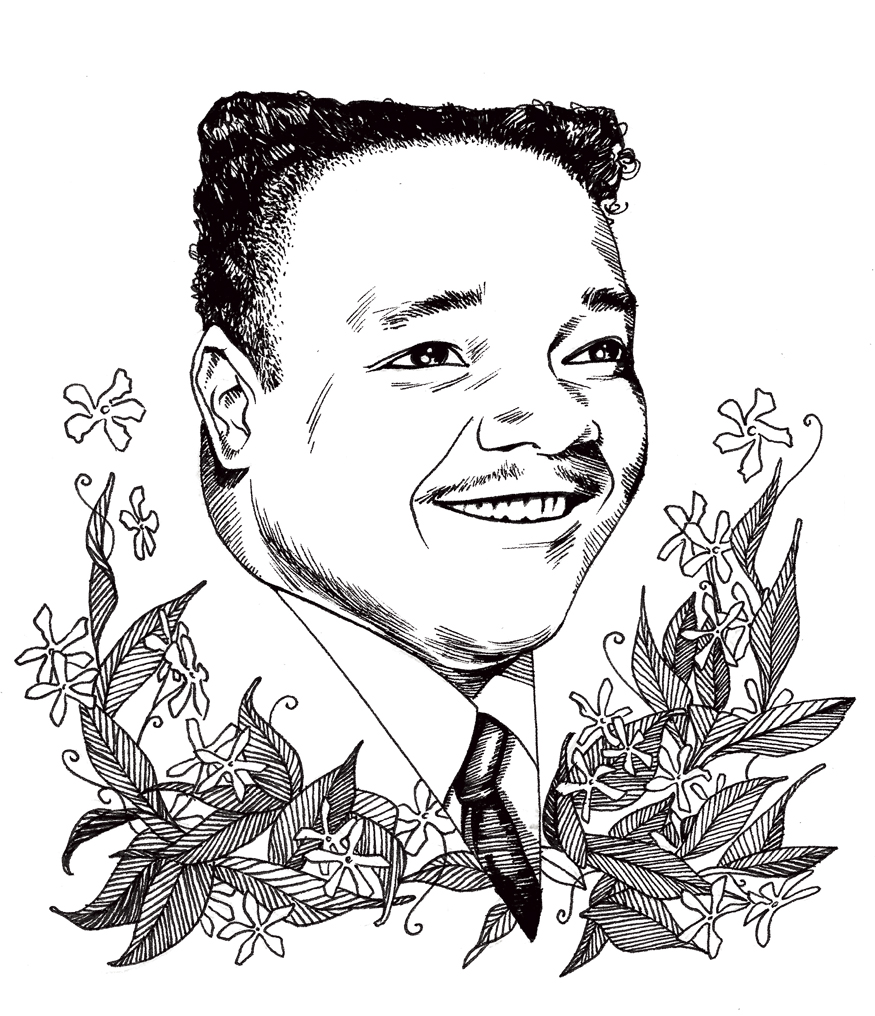 When I’m home, every morning I wake up and brush my teeth, make coffee, then sit at the piano for a bit before settling to work in the studio. Almost without fail, it’s a Fats Domino tune that comes out. When I was very young I had a stack of 45s handed down from relatives to play on my first record player, and there were a few Fats sides in there. The other records in that stack were Elvis, ‘50s/‘60s pop, country, and R&B hits. Nobody told me the influence Fats had on these other artists, but somehow I felt it. The songs, those melodies, and his voice dug their way into my subconscious. As an only child in the suburbs of North Baton Rouge, in my bedroom playing coffee-can drums with toy drumsticks and listening to a hand-me-down record player, I somehow knew those Fats records were essential. I didn’t become a tiny Fats fan or anything; it was just an understanding. There was Fats Domino, and there was everyone else.

Growing up here during the ‘70s and ‘80s, that easy mix of New Orleans R&B, Cajun music, country, blues, and rock and roll that occurred naturally in South Louisiana and Southeast Texas seemed like it was everywhere. I heard it around my parents and their friends, on local country radio, and just generally among the ambience of being a kid in Louisiana at the time. Much later, I’d hear it called swamp pop, but back then, it was just “good ol’ rock and roll,” or “Louisiana Music.” I never thought much about it—it was just always there. I associated it with family friends coming over to play music with dad and getting to run around with their kids; the ladies shouting in the kitchen, listening to AM radio football and drinking margaritas; the smell of something good in a pot on the stove. They mostly played old time, folk, and bluegrass, but depending on who was there, those South Louisiana melodies always seeped through.

I had piano lessons as a kid, but it was music that I didn’t care for at the time. I wanted to play rock and roll, and I wanted to do it on the guitar. After playing guitar for years in bands, my friends and I started buying up vintage keyboards on eBay. Back then they were cheap and plentiful. I started getting more calls for keys than guitar, so I figured I should tighten up my keys playing. Without thinking, the first thing I wanted to do was triplets in the right hand and that swamp pop rhythm in the left. There wasn’t a question that playing that groove in all keys was the first thing I needed to get down. The essential shit. Fats Domino. I’d played everything I thought I wanted on guitar—rock, punk, R&B, funk, old country, weird art rock—but here at the piano, suddenly the sounds on those old 45s came bursting out. The most satisfying thing in the world was to play a Fats rhythm on piano.

Fast forward a few years, I joined The Special Men and it was about the most fun I’d had making music. There were a number of Fats/Bartholomew tunes in the set, and we played to a packed 9th Ward dive bar every Monday. The first few weeks I found myself nervous as hell sitting at the piano. Not because the music was challenging, but because, “Who the fuck do I think I am?? FATS DOMINO played this music in this neighborhood!” It was at about that point I realized I’d been chasing the feeling of playing this music with a band since the beginning, and if I was forced at gunpoint to pick only one kind of music to play from here on out, it would be an easy choice.

There’s a lot to say about Domino’s band and piano playing—the sly economy and effortless power to rock the house, the way he would mold what in other hands could be a wild boogie into a lean, fundamental rock and roll, like on “All By Myself”—as well as his influence on other musicians: how “Be My Guest” arguably did for ska what “The Fat Man” did for rock and roll. But I hear much less about his voice. Aside from the songs themselves, that voice has always been my favorite part of his music. His accent came through in singing that conveyed an honest combination of conviviality, empathy, longing, and more than a little cockiness. He draws out and emphasizes “heart” and “part” in “Ain’t That A Shame.” Domino would dip some notes just a bit lower than other singers would have, and he’d lay something heavy down without disrupting the party. When he sang about going to Kansas City, you knew he would be running the scene upon arrival. When it’s right it sounds easy, and it always sounded like it came easy to Fats.

Without Fats Domino, there would still be incredible music in South Louisiana. We’d still cook, drink, and play music together, love one another and enjoy life. The music, however, would probably sound a lot different. The thing is, so would music from just about everywhere else. Fats distilled this essence of South Louisiana and gave it to the universe—and it resonated. Loudly. I woke on Wednesday, October 25th saddened to learn the world had become a place without Fats Domino, but grateful for our fortune that he didn’t leave before his work was done. I then brushed my teeth, made coffee, sat down at the piano and started playing triplets, like I do almost every morning. Thanks, Fats, for that and a lot more.