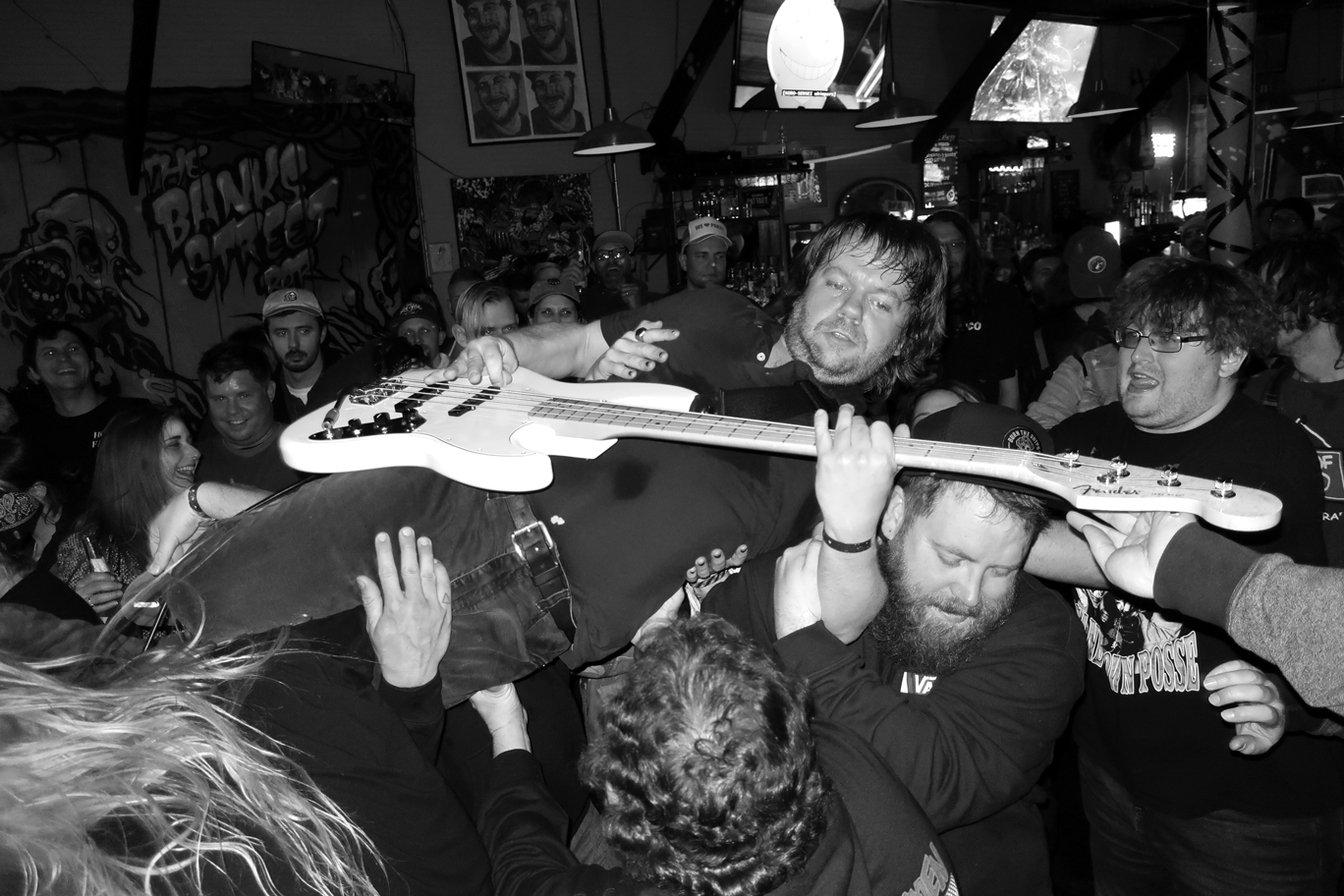 While ANTIGRAVITY took a moment to hit pause, New Orleans dove deep into Mardi Gras madness. As always, music was at the forefront of the celebration. Here are some hazy recollections of just a few things that happened while the AG engine was in the shop.

After taking a year off to watch their health and rest their feet, parade favorites like Egg Yolk Jubilee and Panorama Brass Band eagerly returned to the streets to usher in the Mardi Gras season. People danced across the pavement and yelled in celebration as they took in the sights and sounds of tradition returning to New Orleans. It felt right to watch Benny Jones Sr., a founding member of Treme Brass Band, reign over krewedelusion as “King Goliath & Captain of New Orleans.” After all, what would Mardi Gras be without music? For that matter, what would New Orleans be without music?

High energy Japanese band CHAI made their New Orleans debut right as the city began to devolve into the thick of Mardi Gras chaos. As openers for downer pop icon Mitski at the Civic, they had the difficult task of winning over the audience at a show that sold out long before they even got added to the bill. CHAI took to the stage striking slick dance poses in shiny metallic cloaks like some kind of outer space popstars. They weaved through celebratory synth tunes, 8-bit beat battles, and rock songs challenging archaic beauty standards, all while keeping up highly-coordinated dances. The most striking moment came toward the end of their set when they played the slow-paced “Donuts Mind If I Do.” The dark room slowly filled with light as the crowd, completely unprompted, decided to wave their cell phone flashlights along to the tune. While CHAI walked in as strangers to the audience, they walked away as new friends. Later that week, the band learned the hard reality of touring the States when someone stole their trailer in Austin.

While a good portion of New Orleans fought over shoes at Muses, George Clinton and Parliament-Funkadelic tore the roof off the Howlin’ Wolf! Clinton led a gigantic space crew featuring three generations of his family line alongside longtime P-Funk veterans like guitarist Michael Hampton. The mob grew in size when Jason Neville jumped up to get in on the fun and bark during “Atomic Dog.” Clinton’s robe was absolutely drenched in sweat by the end of the three-hour-long spectacle. He’s going harder at 80 than a lot of folks a quarter of his age!

On Lundi Gras, Quintron and Miss Pussycat helped christen the new One Eyed Jacks on Decatur Street—or at least they were supposed to. Instead, a mysterious band called Bobby M.G. and the Qreeps showed up in their place. M.G., who strikingly resembles a permed-up Quintron, opened the set by apologizing and explaining that Q and P were busy developing Louisiana’s cutest cats NFTs in San Francisco. With that, he and his top notch Missouri band busted into a 15-minute-long version of their single “Mardi Gras Creep” before diving into a lengthy night of Q and P covers. Most of the band dressed in pickle costumes in tribute to fallen New Orleans rock‘n’roll great King Louie, who passed away earlier that month. Missing Monuments drummer Aaron Hill jumped behind the kit for a touching rendition of Louie’s “Heading for the Big City Lights” while the group’s female singer Bobbie M.G. delivered a dancing puppet show in Louie’s honor. The lengthy set ended during the late, late hours with yet another extended version of “Mardi Gras Creep.”

The next evening, local stoner metal band Mars ushered in the end of Mardi Gras with their annual gig at Carnaval Lounge. Their set began with the traditional tossing of Mars’ signature holiday goodies into the crowd while squealing feedback turned into slow, dragging riffs. As the air filled with a pungent aroma, the room soon gave way to a massive moshing frenzy worthy of the space’s past identity as Siberia. A cover of Nirvana’s “Territorial Pissings” (dedicated to Hollise Murphy and everyone else we’ve lost) pushed the room to especially rowdy heights.

Lil Rascals Brass Band cut it up when they played their first gig in probably 15 years at the New Orleans Original Brass Fest on March 14. While they started out as Lil Rascals, the members aren’t so little nowadays. Many of them, such as Corey Henry and Vincent Broussard, have grown to be among the city’s most in-demand horn players in the two decades since the Rascals’ seminal album Buck It Like a Horse. Fans weren’t the only ones excited to see the band’s return to the stage. Over the set, an ever-growing cast of characters stepped up, excited to blow their horns or dance to the beat. At one point, they were steaming through certified classics like a locomotive with three snare drummers at the heart of the engine! Fest headliner Glen David Andrews didn’t show up early enough for them to bust out the iconic collab “Knock With Me – Rock With Me,” but, frankly, they didn’t need him. This was Lil Rascals’ moment to shine again and boy did they.

Later that night, PEARS headlined a stacked bill of local underground heavy hitters at Banks Street Bar. Throughout the set, PEARS singer Zach Quinn twisted his thin body around the dirty bar stage and then rose to pick up the mic stand with his teeth. The punk band navigated their way through chaotic tunes, such as “Pepaw” and “Cumshots,” while also making time for a cover of Santana’s “Smooth” and an original Hormel Chili jingle in the style of KoRn. Few can match their signature blend of razor-sharp punk and absurdist humor. Skramz revivalists UT/EX opened the night with singer Coral Mercy repeatedly lunging into the crowd to scream emotive lyrics over speedy guitar and pummeling drums. In between bite-sized samples of Britney Spears and Shakira, fellow opener BRAT pierced skulls with a mean mixture of thrash and hardcore.

The following night, Lonnie Holley wailed fiery poetics about polluted rivers, the horrors of war, and brains full of digitalization when he performed his second set at the Music Box Village. Mikel Patrick Avery, Kyp Malone, Spirit McIntyre, and Quintron came together to utilize the space’s unique musical infrastructure to soundtrack Holley’s bold vision. An improvised collage of clinks, clangs, thuds, and hums served as the grounds for Holley to call to something higher, something seemingly intangible to the rest of us. Together, he and his collaborators touched our souls and tuned our ears to a higher frequency rarely heard. The weekend of performances served as an opportunity to highlight Holley’s new addition to the space: “The Sound of Freedom in Captivity.” The musical sculpture features a large metal bird with wings stretching far beyond the confines of its cage. Holley ended the night’s set from within the cage, where he preached “Use music all around the world to free us of our captivity.” 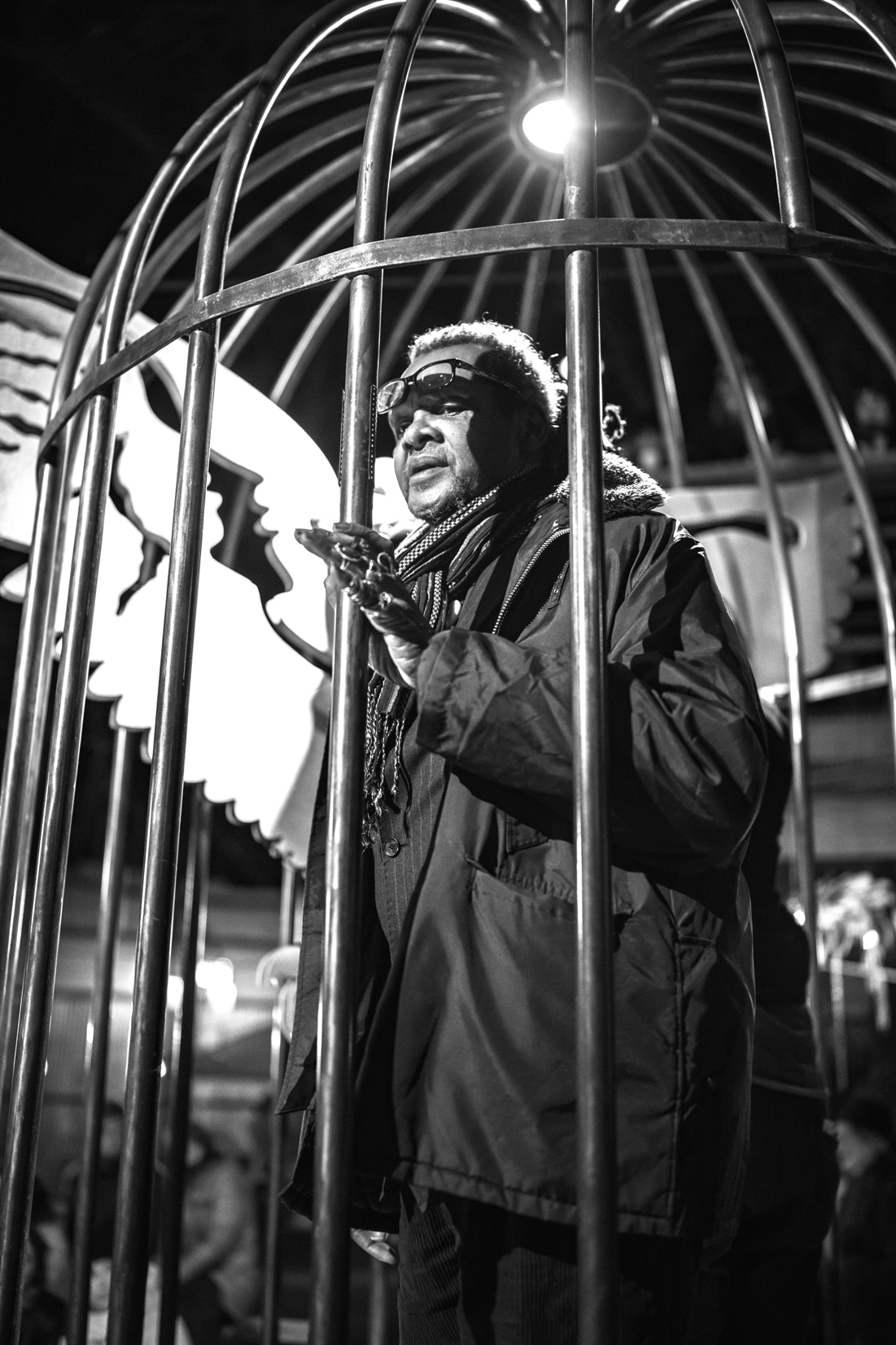