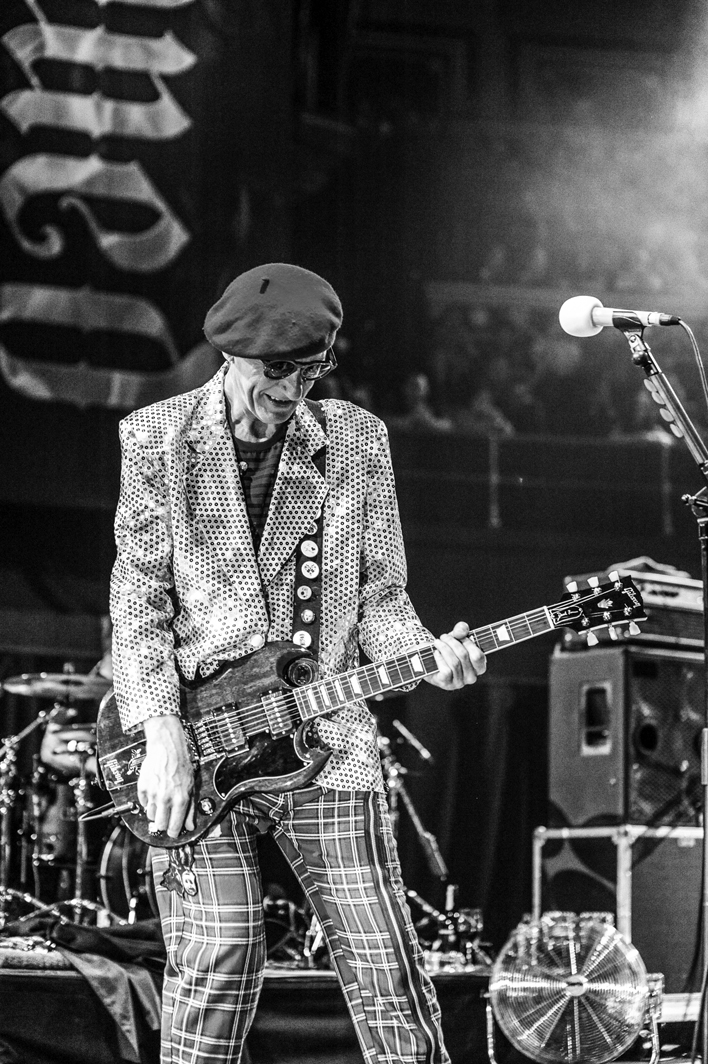 For now, put aside the politics-cum-post-punk of “Generals” from 1982’s Strawberries or the gothy Romanticism of “Street of Dreams” on 1985’s Phantasmagoria, all of which had their influence on their decade’s music. The band’s current tour is celebrating the 40th anniversary of 1977’s Damned Damned Damned. From a historical standpoint, it’s one of the most essential early punk records, if not the most essential for all of the “firsts” associated with its release. As evidenced on the unstoppable brashness of the bass-led “Neat Neat Neat” or the pre-shoegaze lushness of the main guitar riff on “Fan Club,” tracks on the band’s eponymous, Nick Lowe produced album forged the way for countless punk and alt-rock sub-genres that developed during the 1980s and 1990s. Honestly, could we have Minor Threat—or any hardcore, for that matter—without the 58-second-long track “Stab Your Back”?

I was lucky enough to chat with Captain Sensible—one of two members of the original lineup (along with singer Dave Vanian) on this tour—about the current political climate, keeping the band’s ever-changing sound consistently fresh, and their forthcoming album release.

What do you feel separated you from the other early British punk groups (Sex Pistols, The Clash, etc.)?
While our rivals waited for a major label to come knocking with big wads of cash, The Damned did it the punk way, signing with Stiff, one of the first ever indie labels, working from a shop in unfashionable Paddington. Stiff bands would be put to work packing each other’s records, roadying for one another and generally helping out. For example, fellow Stiff artist Nick Lowe produced our album, and managed to capture the manic energy of our live set pretty well, I thought. He didn’t overproduce it, that’s for sure! While we got on well with the likes of Glen Matlock and Joe Strummer, the band’s managers were at each other’s throats trying to get preeminence for their respective groups. Somehow The Damned have maintained a kinda outsider status, which suits me fine. We don’t like to hobnob with celebrities or network in the corporate rock world. In fact, we make a point of slagging off most other bands: well, I do anyway. Apart from guitaring, that’s my job— ”Oh, don’t worry about him… that’s Captain Sensible. He hates everyone!” There’s a lot of pirate imagery about currently, but that sums us up: punk pirates who don’t give a fuck. Love us or hate us, as long as there’s some sort of reaction, that’s fine.

Throughout the years, The Damned has arguably covered many of the punk sub-genres that have developed since the fast-and-loud Damned Damned Damned. What do you think the band’s influence has been regarding the growth of punk subgenres like hardcore, pop punk, etc.?
It’s been a musical adventure in The Damned. We hated to repeat ourselves, which explains the different vibe to successive albums. There were some objections, but mostly people found the journey fun. And we certainly did: being lucky enough to have existed in a time when a label would block book a few weeks in a studio and let you make whatever music you fancied. I don’t imagine that happens too often the e days. Nice to be cited as an influence too, but the thing newer bands could learn from listening to our first album is the sheer recklessness of it all: from a time before Auto-Tune and Quantise were invented, there’s a glorious, unabandoned mania in those grooves. It’d be nice to hear more “honesty” in today’s music. Perfection is overrated; let the rock ‘n’ roll and a few rough edges shine through! Funnily enough, people are always posting snippets online about unlikely bands performing Damned tunes: U2, Oasis, Coldplay, for example. Good luck to them, but I can’t imagine what it must be like to be in a mega band like that, being responsible for loads of staff and all that pressure to sell, sell, sell. I prefer to be a lazy bastard, only getting out to do gigs when I’m totally broke.

John Doe from X told me once that the group had such a dynamism to their sound because they all had different musical interests (everything from folk and punk to poetry and rockabilly). Do you think your lineup changes were essential to keep your style ever-changing, or was it a central motive to constantly change the band’s sound?
When we started out there was no punk to have been influenced by; but of course, each of us, we had accumulated sizeable record collections. I was interested to see Miles Davis and Coltrane in Brian’s, alongside MC5 and Stooges, of course. Dave’s is more movie soundtracks and organ recitals, whereas mine is wall-to-wall glam rock with a smattering of psych pop. When founder and guitar maestro Brian [James] left the band all those years ago, without our leader and guitar hero, we were not considered to have a hope in hell of surviving. After all, none of the rest of us had any history of songwriting. Amazingly we discovered we not only could write but that we were quite good at it. Who’d have predicted that? But it’s the mix of different ideas we bring as individuals to the table that makes The Damned so eclectic: songs you’d think would never work suddenly sound “right” when in a band context. There is a Damned sound, but it’s hard to define.

How is the new record coming along? What can we expect?
I’d no idea what Pledge [the band’s current label] was, but when told it [would allow] us to make the album we wanted to make, without a record label bloke watching over your shoulder, I was there. So we can pretty much do what we like, which in the ‘80s would’ve meant getting comprehensively sloshed and wrecking the studio and getting thrown out of a few along the way for those sort of capers. Probably not this time, though, being considerably older. But only marginally wiser. Pinch, Stu, and Monty are such great players, though. They’re going to get a chance to flex their muscles musically. This is a band that can break out of a song structure and really jam it up. Each album we’ve made sounds different from the last one, and this one will continue that trend. It’s fun to experiment, to be creative, take a few risks. The only shame is not releasing before the world tour, but to have boshed out a half-finished album would be wrong. I have Sgt. Pepper and Pet Sounds in my record collection, played ‘em to death over the years, and unlikely as it sounds, always aspire to achieve those standards.

You’ve played a bunch of different instruments in the band. What’s your favorite instrument to play, and does it change from song to song?
You have to admire people who can pick up a new instrument and get an acceptable sound out of it. I’ll have a go at anything, not suffering from stuff like embarrassment (which explains the onstage nudity back in the day) or fear of failure, and can generally plonk away in the studio until I get it right. Sitar, tubular bells, Hammond organ, harpsichord, mellotron, etc. I love all those sounds. I’m sure there’ll be plenty of that on the new album. Yeah baby!

Is your political party/protest group, the Blah! Party, still active? If so, what political positions are your group currently advocating for or against?
What a ghastly choice there was(n’t) in the recent U.S. election: between an unapologetic warmonger and a megalomaniac businessman. What a nightmare. Would Bernie have been a better choice? I like to think so, but then again I thought that when Tony Blair was elected, and look what happened. Same with Obama: even I bought the “change you can believe in” bit. I’m now at the cynical stage: I don’t trust the bastards and won’t be pinning my hopes on any new hopefuls ever again. We have to be thankful to the mainstream media for opening a debate on “fake news” though. That’s encouraging, because the focus of attention there has gone straight back on the dodgy garbage they’ve been peddling for years themselves. You have to laugh, don’t you? As for the Blah! Party, I gave that up as I can’t organize my dirty laundry let alone a political party. But if I was still in that game, I’d be advocating less war, with the huge cost savings that would generate, which I’d dedicate to fostering a more caring society. Especially for the old folks of which I am now one.

The Damned 40th Anniversary U.S. Tour hits House of Blues on May 16th. For more info, check out officialdamned.com.