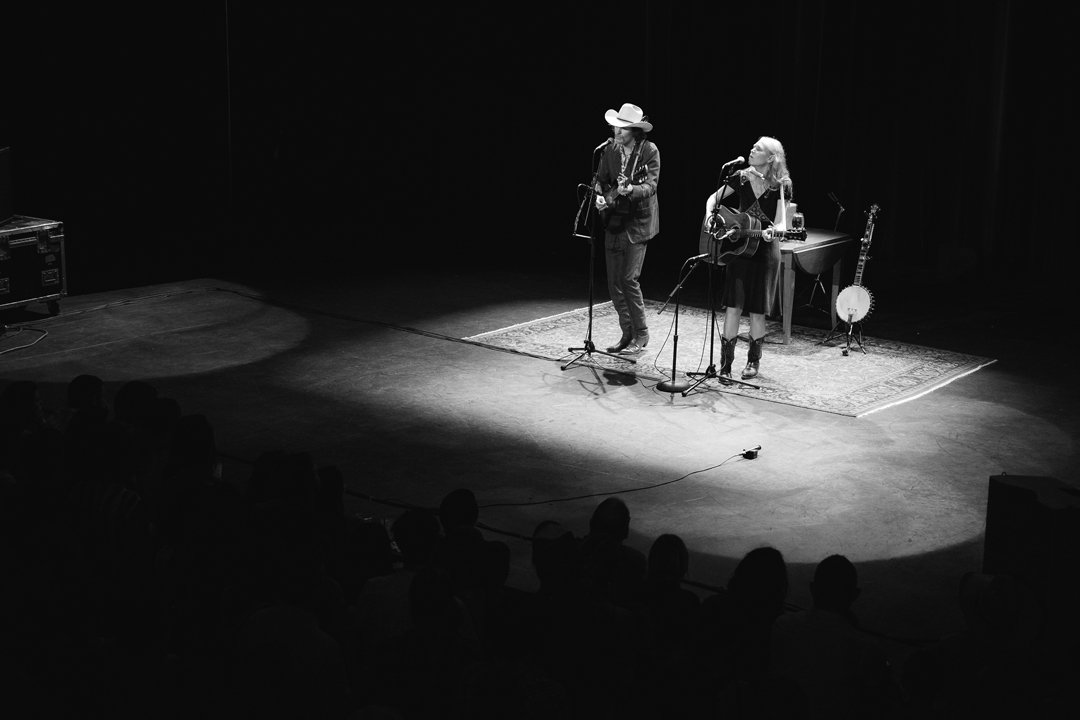 Gillian Welch, accompanied by her partner in life and music David Rawlings, performed two sets and four encores to a packed, enraptured house on a Sunday night at the Civic Theater. I missed the first set, which included material from The Harrow and the Harvest, Revival, Time (The Revelator), and 2003’s Soul Journey, the rerelease for which their tour was in support. As though LARPing an actual Gillian Welch song, I had been sitting outside the concert crying in a pickup truck. The horrible realization that I was missing out on one of my favorite living songwriters created a feedback loop with my pre-existing anguish and anxiety, and immobilized me for an hour. When I joined the show-in-progress, though, I quickly found myself in like company, a sea of giddy watery-eyed people in our favorite dresses. The stage was set with a rug, a table, instrument stands (banjo, two guitars), and two wine glasses. I perceived it as arranged with Biblical symmetry, intimidated by the performers even in their absence. Gillian and David have been playing together for almost three decades. Now that infidelity has severed Sonic Youth’s Kim and Thurston, and the veil of mortality has divided Dead Moon’s Fred and Toody, I cling to their union all the more fiercely, my staunch aversion to hero-worship overpowered by mawkish romanticism. The way they play together, the way their voices blend, synchronicity and unison don’t do it justice—it’s downright eerie. Individually and together they maintain a delicate balance of expert technical chops and raw emotion; although live, Rawlings’ maniacal soloing can trample on Welch’s sparse tunes in a way that deviates from the signature restraint of the recordings. The set list seemed improvised but didn’t lag. Welch, who even when smiling, retains a faint cast of Dorothea Lange’s “Migrant Mother,” bestowed us with a few offhand remarks between songs. “Do you ever have a skirt that just twists around on you while you wear it?” Gillian asked us, removing her apparently uncooperative harmonica neck rack after “Wrecking Ball.” We laughed—pleased to relate—but for all the rack’s apparent malfunction, she never blew a sour note. The duo switched instruments throughout the performance. A floor mic captured Welch’s clogging in “Six White Horses”—she stepped forward without ceremony, hoisted the hem of her dress, and clogged the shit out of that song. Afterward, demurely, she told us she only knew those two steps, but that they’d served her well. Whether Gillian Welch is singing an oblique diss track about musicstreaming services (“Everything is Free”) or about a morose cowherd (“Hard Times”), the message is always as germane as it is timeless. Life is imbued with a sense of imminent and immanent collapse, or said better by Welch, “It’s a mean old world, heavy in need/That big machine is just picking up speed.” This is dark Americana, perhaps the genre best equipped to tackle these times, and Gillian Welch is its perfect avatar. The encores included a cover of shape note legend Albert Brumley’s “I’ll Fly Away” and Soul Journey’s standout “Look at Miss Ohio.” The crowd roared in appreciation of Jefferson Airplane’s “White Rabbit,” the final encore of the night. I’d personally hoped for the show to end with the 14 minute epic “I Dream A Highway” to send us home battered and crawling. That was greedy of me though, and I could have had my fill of the darker tunes if I’d only caught songs in the first set like “Tennessee,” one of my all time favorites, kind of an inverse “Miss Ohio,” a bad-girl anthem sans the winsome redemption. But I didn’t leave disappointed, not even in myself, just lucky to have been there and to have borne witness.