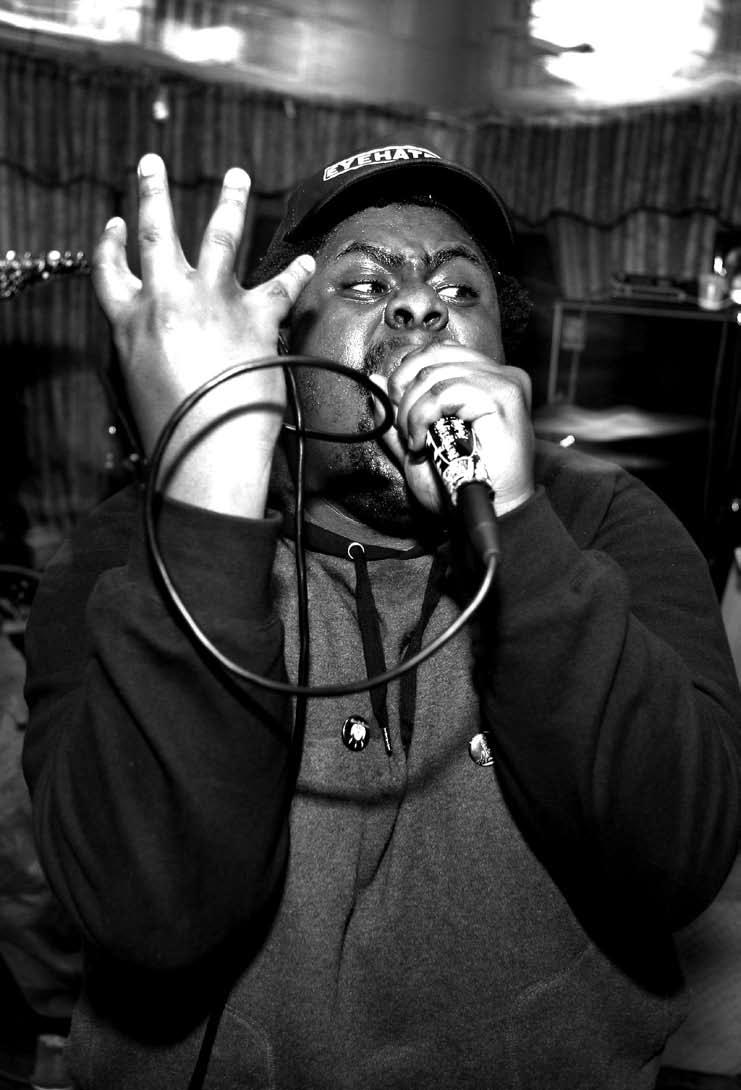 The sound of New Orleans powerviolence act Fat Stupid Ugly People perfectly dovetails with their name. Brief, jagged songs are punctuated by rapid tempo shifts with vocals that are alternately bellowed or screeched by what sounds like a total maniac. At times it all seems so unhinged, you fear the band might just come apart at the seams until they take a sharp turn and deliver a crushing breakdown, pulling everything into sharp focus. For ten years now, Hollise Murphy (vocals) John Angus Schexnayder (guitar) and Chris Prince (drums) have been delivering their hybrid of aware, darkly humorous hardcore and metal with no sign of slowing down anytime soon. I caught up with the band to find out what has kept them going and what to expect in their next decade of mayhem.

Since it’s the ten year anniversary of Fat Stupid Ugly People, have there been changes as the band has evolved? This can be both internal and external.

Hollise Murphy: I guess we’ve seen a lot of bands come and go in the New Orleans scene, ones that have had a high stature at one time. Either because they went on to do other things or they don’t associate with the scene that much anymore. We’ve also seen new bands rise up like Ossacrux, Criminal Slang, Classhole, and Gristnam. Those bands have really stepped up and shown that the heart and spirit of the New Orleans underground will never die. And I feel like personally in the band we’ve really focused on producing high-quality, genre-defining music by challenging ourselves to stay fresh and cutting edge. This is in our delivery and approach, our private ethics as well as our structure.

Speaking of the New Orleans scene and its ebb and flow, do you find that there’s a certain level that bands reach or is it just that some bands come to the fore while others recede?

Chris Prince: I think it’s harder to get people to come out to shows than it was ten years ago, actually. It seems to me that at that time, there were more people coming out to the shows. Like when Dixie Tavern was around.

John Angus Schexnayder: We didn’t really start getting bigger crowds until about our seventh or eighth year in. It took a while to build up a fan base. Now we are getting bigger shows lately, opening for big-name bands. That also draws a lot of people.

It’s obvious that F.S.U.P. isn’t just a garden variety hardcore band. What do you think it takes to stay fresh and exciting in today’s landscape of aggressive music?

CP: I guess the first thing is what I’d say to a lot of bands, which is stop trying to sound a certain way. Some acts just try so hard to sound like this band or that band that they like, but all they’re doing is replicating something that’s already being done. In F.S.U.P. we all have different influences that we mix together—punk bands, hardcore bands, metal bands… and I think that’s what it takes—having a lot of variety in where you’re coming from.

JAS: When we first started off it was like a mediocre hardcore band. But over the years we’ve become a multi-genre thing. It took us a while to figure out where we wanted to go and a lot of people have said that we have a powerviolence sound, so that’s the direction that we’ve been heading lately. 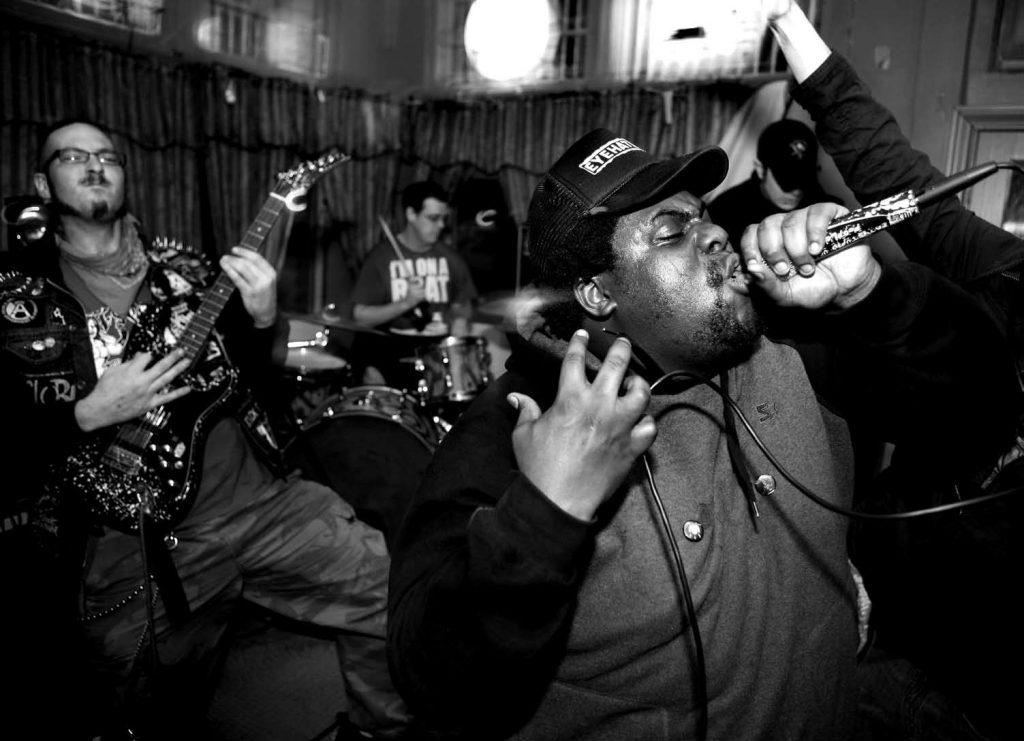 Is that a good way to describe the band, as a powerviolence act? Is that a label that F.S.U.P. is comfortable with?

As a general rule, extreme music shows such as hardcore or metal can be violent. These types of shows aren’t for the faint of heart. Is this something your band encourages or is it just an article of faith that it happens?

JAS: There’s not really a lot of violence that goes on at our shows. I mean there’s mosh pits going on, people being rowdy, but powerviolence is just a style of music that started in the ‘80s.

CP: I think the violence pertains mainly to the aggressiveness of the music. I personally don’t condone just slugging someone at a show. I’ve seen people at shows just walking into the crowd and randomly hitting people. I don’t condone things like that.

JAS: We wrote a song called “Metal Karate Kids.” It’s about these kids that were going into mosh pits and doing spin kicks, throwing elbows and that sort of thing.

It does make sense in a way, that people would use this sort of music to vent frustration and rage.

CP: It’s all about being able to release, you know? A lot of hardcore bands have aggressive lyrics and they get people really pumped up and things get out of control. People get drunk, fights happen…

JAS: People punch each other in the face on accident!

CP: Like our song “Kick You In The Face And Put It On Youtube.” That’s a joke, we’re not telling people to go out and do that. [laughs]

JAS: A lot of our songs have a comedic edge to them. And we’re working with shorter songs that have titles like that, ones that revolve around weird subject matter.

HM: What we’re really trying to go for is a sound, a delivery and a presentation that is often imitated and never duplicated. I say that because of our structure and our willingness to stay fresh and against the grain. It allows us to present ourselves at a more intriguing level to a listener of styles such as hardcore. I think that Angus has really helped us find that structure, coming up with new songs and titles.

Considering that the name of the band and the music you play isn’t considered what is traditionally pretty, are those observations or a mission statement overall?

JAS: Well, the name of the band came from a list of names I had and Fat Stupid Ugly People stuck out like a sore thumb, so we decided to go with that.

HM: It’s more of a shock value sort of thing. We wanted to see how far we could push the envelope. We just wanted to express ourselves in a unique manner. 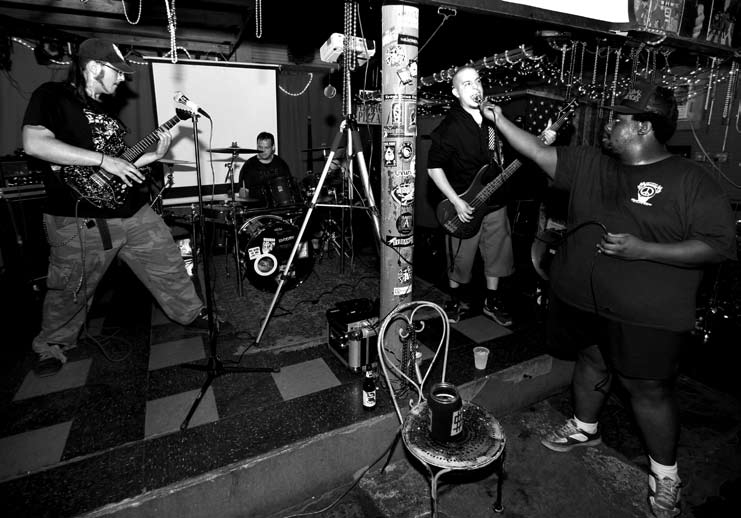 Being an underground New Orleans band for over ten years, have you had any trouble with the law—any noise complaints or shows being shut down?

CP: We’ve only had a couple, maybe three, shows that have been shut down. Two were house shows and one was at the Buddha Belly. One of the house shows was in the Broadmoor area of town and they just asked us to stop playing. It hasn’t been anything too crazy; no one has gotten arrested, no violence in our experiences.

JAS: Our second show was another house show in Luling. The parents didn’t like all the crazy rowdiness going on, so they just shut us down after the fourth song. And the Buddha Belly show, they told the opening band that they had to turn the volume down. We went on because one of the other bands was like “fuck this” and left, so we played and nobody told us anything.

CP: If you have any kind of violent problems with the cops, then it’s really on you. A lot of the time if you’re cool with them, they’ll be cool with you. This band hasn’t had any problems with the cops; especially these days since we don’t play as many house parties. We tend to play places like Siberia where they’re really on it. They don’t have any trouble with that sort of thing.

Since the “FSUP Weight Loss Program” EP is now available on the Internet for free, does that mean that there are new recordings in the works?

HM: Yes. We don’t have a title for it as of yet. We’re trying to come up with a title that works with our current sound. We have a list of things; potential song or album titles that we’re considering while we create. In some ways, they are inspirations for while we create the ferocious sound that is Fat Stupid Ugly People. And I think that the listeners will find that out for themselves once it’s released.

JAS: It’s probably going to be an EP. The songs are all really short. I don’t think the whole thing will be more than 15 minutes long.

The best hardcore albums aren’t much longer that that, so it makes sense.

HM: We want to deliver short, fast, meaningful songs that get the crowd pumped to a whole new level, songs that get people moshing and acting frivolously amongst their peers while listening to our sonic defecation.

Is there going to be a tour to support the new recording ?

JAS: We’ve played a few gigs close to home. Hattiesburg, Baton Rouge… HM: While we haven’t been able to do a full tour, we have played out of our comfort zone by playing away from home. And we’ve gotten positive reception everywhere we’ve played so far. That’s helped us continue to want to deliver this to the U.S. eventually. As a young up-and-coming band, we’re excited about the challenges it presents. We want to bring people the Murder Capitol powerviolence that is Fat Stupid Ugly People.

Sometimes it seems almost a cliche to say you’re from New Orleans. Is it something that you are proud of or just another place to call home?

HM: It has definitely molded our sound to a definitive level in that we’re able to reach a larger audience. It’s helped us open for bigger bands, making us want to step up our game regarding the quality of what we do.

So what do Fat Stupid Ugly People eat, anyway?

JAS: We eat punk rock, shit grindcore and wipe our asses with metal.

CP: I just eat pizza. All the time.

I think the time has come for Hollise to reveal that he is in fact a time traveler. People from all over the city have stories of going to a show in one part of town and seeing Hollise. Then they go to another show the same night and Hollise is already there as well. How do you exist in two places at once?

HM: Through the power of Greyhound buses and other random travel methods, I am able to transport myself mentally, physically, and spiritually to any available show that is deserving of my attention. [laughs] I just love to support various bands from all over the world and due to the accessibility that I have currently, I’m able to be there for my friends. I like to be able to show a level of support; it means a lot.