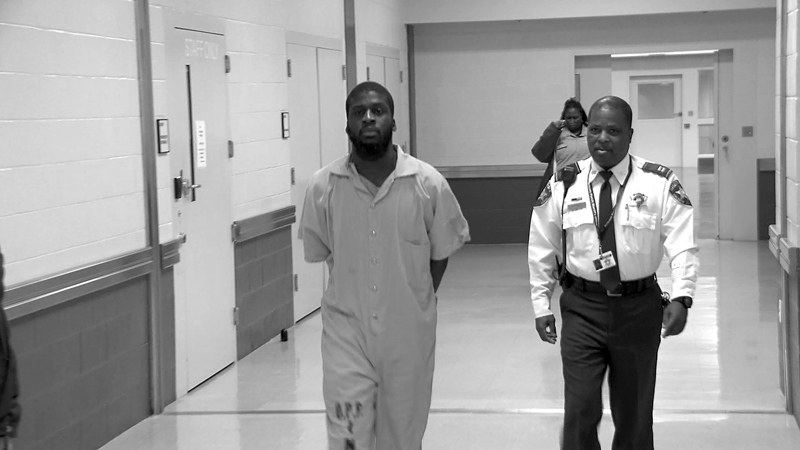 The oppression doled out to those in the hands of Orleans Parish Criminal District Court comes in many forms, and Guilty Until Proven Guilty covers many of them. Mandatory minimums, multiple billings, and a non-unanimous jury law dating back to the 19th century elucidate the draconian nature of everyday proceedings. With appalling regularity, innocent people spend years—sometimes the remainder of their lives—behind bars for crimes they didn’t commit. There’s an abundance of evidence to demonstrate that the system is severely broken. Harry Moses, an award-winning documentarian, set out to tell a part of this story and craft a candid look at the failings of the New Orleans criminal justice system.

You’ve been making documentaries since the late 1960s. How did the creation of Guilty Until Proven Guilty come about and what compelled you to tell this story?
I’ve been making films on the subject of race throughout my career. When Ferguson happened, I decided I wanted to do a four-hour series called “Race In America.” “Guilty Until Proven Guilty” is the initial hour in the series. What compelled me to tell this particular story was a brief interview I did in 2016 with an inmate at the Orleans Parish jail, Tim Conerly, who had been charged with armed robbery; and after two-plus years in jail was still waiting for his day in court. Tim’s predicament seemed emblematic of several failings in the criminal justice system that are explored more fully in the documentary.

Do you view the criminal justice system in New Orleans as an anomaly? Or would it be more accurate to say that it is representative of how police, prosecutors, and court systems work throughout the country, only more severe?
In truth, I came to New Orleans because it is a leading example of a nationwide malfunctioning criminal justice system in which Louisiana has one of the country’s highest rates of incarceration. After more than a year spent researching and filming this documentary, there is little question that the criminal justice system in Louisiana and elsewhere treats poor and African-American defendants differently than those who are white, or have more resources. (New Orleans District Attorney Leon Cannizzaro disagrees). At the same time, many of the problems that we saw in New Orleans—long waits in jail before trial, long sentences for non-violent crimes, a bail bond system penalizing the poor—take place throughout America.

The film juxtaposes Leon Cannizzarro, the current Orleans Parish District Attorney, and Jason Williams, the New Orleans City Council President and one of the DA’s most outspoken political opponents. What’s the significance of emphasizing their contrasting viewpoints in your film?
Leon Cannizzaro is a “law and order” District Attorney known for his aggressive approach to prosecution. Jason Williams believes that we need to be “smart on crime;” that “putting people in jail for as many years as you can get as a prosecutor has not proven [to be] a good crime reduction strategy.” The conflict between the two men epitomizes the debate that’s going on in cities all across America.

You were able to gain access to jails and prisons for filmed interviews. As a filmmaker, can you talk about being inside those facilities and the process of collecting stories from incarcerated people?
It’s getting inside the facilities that’s the tough part. Once you do I’ve found that most people are eager to tell their stories.

Your film delves into the intense choice the accused are often faced with: plea or trial. Can you say a few words about this dilemma and the role it plays in shaping the outcomes of criminal convictions?
In New Orleans, the habitual offender statute is like a sword of Damocles hanging over the head of defendants with one or more previous felonies. A guilty verdict often results in a prosecutor requesting the judge to file a multiple bill, which drastically increases the mandatory minimum sentence. The young man in our film, Tim Conerly, had to decide between accepting a seven year plea agreement (reduced to five years for time already served), or going to trial, losing, and being sentenced to a minimum of 49½ years in prison without the possibility of parole. This was doubly difficult for Tim because of his long held claim of innocence and his public defender’s belief that he could win at trial. It is my own view that no human being should be faced with such a choice.

Can you explain Louisiana’s non-unanimous jury law and how it factors into the state’s high rates of incarceration?
Louisiana is one of only two states in the country that allows non-unanimous jury verdicts. This may change after November 6, when voters will decide whether to change this law. Non-unanimous juries date back to the Louisiana Constitutional Convention of 1898 and its avowed intent to “establish the supremacy of the white race.” As Tim Conerly’s public defender, Will Snowden, explains in the film: Only 10 out of 12 voters need to agree to convict, which he says “makes it easier to convict Black folks, and that if Black folks got on the jury, their votes would not count.”

How do you interpret Louisiana’s preoccupation with incarcerating young Black men?
I wouldn’t call it a preoccupation. I would call it a failure of society.

While making Guilty Until Proven Guilty, how did your ideas about criminal justice change or evolve?
If anything, the experience left me more convinced than before that almost everything about the criminal justice system needs rethinking: from the treatment of African-Americans and the poor caught up in this system, to improved police training, to reforming the bail bond system, to charging fewer people with minor offenses, to speedier trials, to better job training for prisoners, to the restoration of basic rights for those who have served their time and are re-entering society.

Was there any one moment during the making of the film that you found particularly impactful?
The interviews I did with Tim Conerly. He’s a young Black man who was raised under dire circumstances and is still struggling to overcome them. It’s easy for society to dismiss people like Tim. They are not dismissable.

Who did you make this documentary for and what do you hope your audience takes away from watching it?
Like every film I’ve made, the hope is to bring understanding to a serious and complicated issue through characters that grip an audience, and hopefully to get that audience involved in the issue.

The world premiere of Guilty Until Proven Guilty (directed by Harry Moses) will be screening as part of the Change-Makers lineup on Tuesday, October 23 and Wednesday, October 24 at the CAC. For more information on the film, check out guiltyuntilprovenguiltyfilm.com