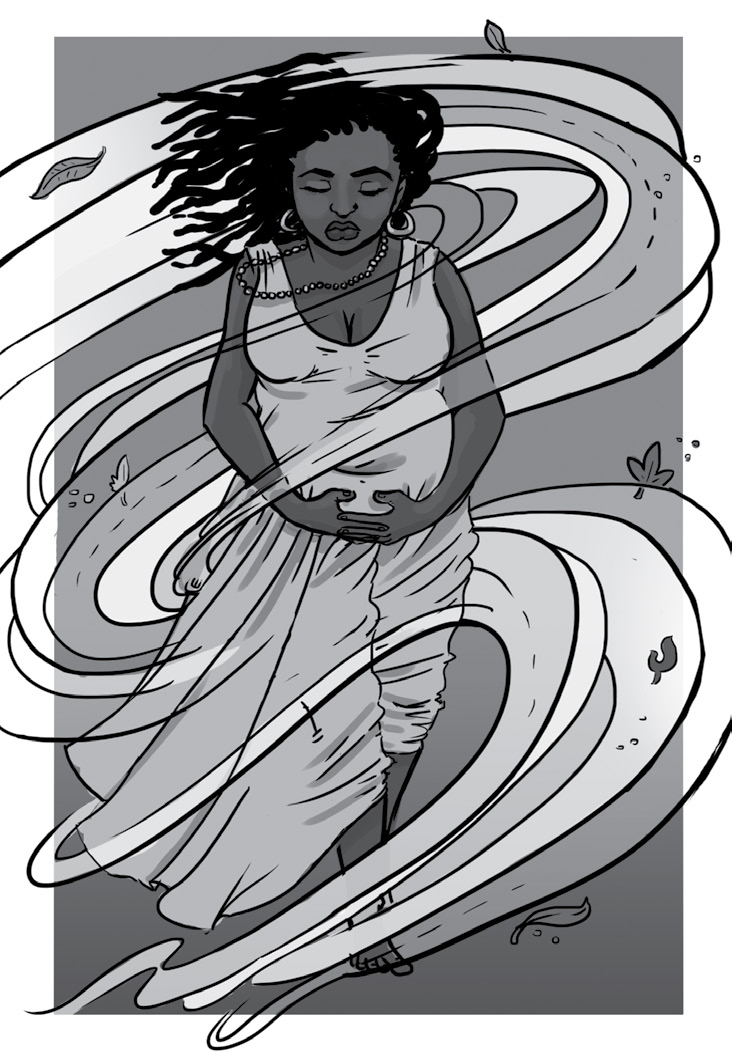 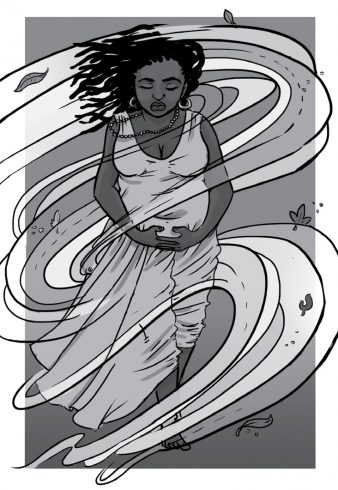 The word “doula” comes from the ancient Greek, meaning “a woman who serves.” A doula is a professional who provides continuous emotional, physical, and educational support to the mother before, during, and after labor. My passion for women’s health led me to join Birthmark Doula Collective in 2013. Our collective is committed to families throughout their journeys in pregnancy, childbirth, and the very first stages of parenthood. As the gap of wealth distribution in the United States widens, low and no income women and children continue to be the sacrificial lambs on the frontline of survival, especially Women of Color. The emotional support, resources, and advocacy that doulas provide can be the difference between negative and positive beginnings and birth outcomes for them. Utilizing birthwork as a platform for social justice, a percentage of our births, prenatal classes, and lactation consultations are offered for free or sliding scale to qualifying families. We believe that all families deserve a doula, regardless of income. The following story is an actual account of one of these families and how they benefited from receiving doula services. The mother’s name has been changed to protect her identity.

During our second prenatal visit we closed the door, sat together, and held hands in a darkened room at the women’s shelter. Deja began to cry. My colleague suggested we pray with her, if that’s what she desired. She told us her spirit felt weak and prayer is what she needed most. As we held space for her I’m not sure which poured out faster, her stream of tears or the staccato prayers to her Orisha deities. She was a dam filling beyond capacity. She told us her roommate and staff at the shelter were controlling and hostile toward her.

She did her best to maintain an amenable environment and partial peace of mind for herself and the new life within her. She judiciously hid her voice, a few prized material possessions, and Yoruba faith. She told us as soon as she had the baby and stable, private housing, the first thing she was going to do was set up her prayer altar for protection. At our next visit, she told me I would be blessed for allowing her to profess her prayers and wounds shamelessly. 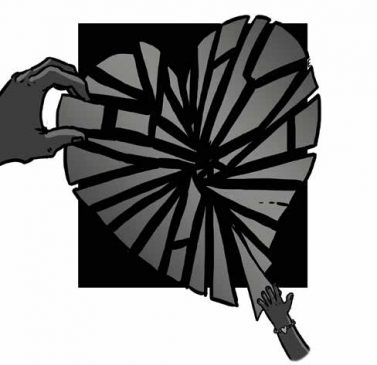 Deja’s heart was soft as sand. Surely the immeasurable shattered pieces of her broken heart couldn’t be classified as hardened. Her pregnancy was a joyous, yet grim reminder of the past. She had been kidnapped and taken thousands of miles away from her family. She was a survivor of sex trafficking. As her nightmares collided with reality, it became harder for her to distinguish the truth from her imagination. Sometimes she couldn’t control the paranoia and voices that often kept her company. She said the voices were like companions and became her haven when she was living in hell. By the time she executed her plan to flee her captors, she was pregnant. One of the men who repeatedly forced himself upon her was the father.

She contacted loved ones for support when able. Even if it was long distance, loving words from familiar voices comforted her. Yet, the balm that soothed her broken heart was also a bitter dagger. These same vessels she sought for love spoke death to the life inside of her. They told her, “you need to get rid of it before it’s too late.” “Don’t keep the child, it’s not blessed.” “Don’t curse yourself. You will be reminded of him every time you look at the baby’s face.” She asked me “but can’t they understand that my baby is my joy? She is my last hope, the one thing I am most proud of in my life. She’s my heart.” Even if no one else celebrated her rite of passage into motherhood, I am grateful fate chose me to support her transition. I told her how brave and courageous she was to choose life. Awaiting her heart’s arrival, she felt small rays of hope as she began placing her life’s pieces back together.

Deja called me at dawn to let me know her water had broken. An ambulance was on its way to get her. I told her I would meet her at the hospital. When I arrived, she kept saying how happy she was to see me. Other than myself, her donated car seat carrier and scattered bags were the only pieces of familiarity to keep her company in the labor and delivery suite. Her OBGYN was with another client, who was also in labor. Since he was unavailable, she was assigned a resident whom she’d never met before.  The resident had no knowledge of her extreme circumstances. Her routine of departing and entering Deja’s room to check on the progressing labor is the standard in theory. Yet her words created an atmosphere Deja had known all too well—one of control and demeaning hostility.

As I did my best to maintain Deja’s privacy and keep the door closed, I could hear the resident’s whispers about her to several curious nursing and medical students. She called Deja “non-compliant” and “irresponsible.” I was filled with so much rage. I didn’t want Deja to sense my feelings. I thought to myself, “How could she be so callous? Maybe I should take the resident aside and tell her Deja was unable to attend her last three appointments because she was leaving the shelter. She had a hard time finding someone willing to help her move.” Even if I did explain my client’s situation, I doubted it would make much difference. Racism and classism are unforgiving regardless of personal circumstance. Time was of the essence. I forced myself to suppress my internal conflict and refocus. As a doula, my assignment was to support a woman in labor, not petition a medical resident for compassion.

The next time she entered the room, a group of students and a clipboard full of papers accompanied her. In between contractions, the resident lectured Deja on the importance of birth control. She repeatedly explained the benefits of her receiving a contraceptive implant, which could quickly be inserted inside of her immediately after giving birth. Maybe in the resident’s mind, preventing the tragedy of another inner city child being born to a low-income single mother was the preeminent concern at the time.

Clearly all of the credentials in the world do not translate into one being fluent in empathy.

There were several more instances of the resident coming and going. Throughout all of this, Deja was overcome with silence and had hidden her voice once again. I attempted to remove her from that hiding place. “How are you feeling? Do you understand what the resident is trying to tell you? Do you need me to explain anything she said? How can I help you at this moment?” She didn’t respond. Then I pleaded “I can’t help you if you don’t tell me.”

All of a sudden Deja screamed out loud: “Why is she talking to me about birth control? Doesn’t she know sex is the last thing on my mind? I can’t take this pain anymore. I’m just ready to have this baby!” I told her to mimic the low deep breaths we had practiced. A few minutes later, I laid the cool cloth across her forehead as she’d requested. I pressed firmly on the center of the small of her back with one hand. I held her hand with the other. I whispered in her ear “You are beautiful. Do you know how strong you are? You are doing an amazing job. The only thing that matters in the world, at this moment, is you and your baby girl. Remember, you have the right to question and refuse any intervention that is not medically necessary. I cannot tell her ‘no,’ but you can. This is your body. Remember to use your voice and tell her.”

I knocked on the door of her new efficiency with great excitement and anticipation. She couldn’t wait to give me a  tour. This particular afternoon, her home was teeming with sunshine and love. I was so happy she had a private sanctuary for herself, the baby, and her altar. She was full of gratitude. I asked Deja how she was feeling. Often after labor, everyone is so focused on the bundle of joy, they forget the mother needs warmth and attention as well.

“Jamilla, I can’t tell you how happy I am that I had you as my doula. I was so afraid. Everything happened so fast! I’m proud of myself and I’m happy my baby is healthy. I will tell you this, if I had been alone I would have signed those papers to receive the birth control. I was in so much pain I would have done anything just to make the resident leave me alone and stop asking. I’m glad you reassured me that it was okay to tell her no.”

“Deja, you were amazing. You had everything you needed at the time. I just reminded you that it was okay to stand in your power. Things are really coming together well for you. Please let me know if there are any additional resources or community organizations I can connect you to. I do have an important question, though: do you have any desires or goals at this time for your new family?”

She replied “I hope by this time next year that I can move my baby into a bigger apartment and have a part-time job at least. I plan to continue visits with my home health nurse and take advantage of whatever opportunities I can. I am not where I want to be, but I truly thank the Spirits that I am not where I used to be. I am hopeful for my future.” It seemed as if all of her pieces had fallen into place.