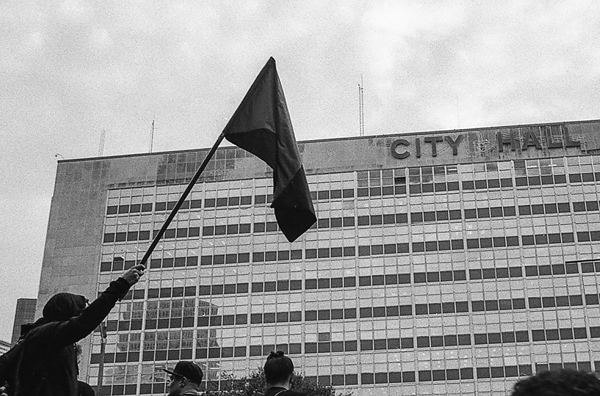 If you’re hep enough to be reading ANTIGRAVITY you’ve likely seen the footage of white nationalist Richard Spencer getting decked during Trump’s inauguration. Step close, reader. Closer! I showered yesterday, it’s fine. Lean in—I’m going to whisper to you exactly who punched him! Are you ready?

It was a brave idealist, who wore a mask to do right in an unjust world.

It wasn’t a liberal who punched Richard Spencer. It wasn’t someone with a placard advocating electoral college reform, or someone who thinks the mark of a “good” protest is its being so acceptable to the status quo that police hug the protesters.

Who punched the Nazi, in this moment a hundred thousand keypad warriors have fetishized? A masked-up troublemaker.

Already, online alt-Nazis are hunting the heroine or hero who clocked Spencer, putting bounties on the puncher’s head. We are at war against fascism, on a national scale and here in New Orleans. Once you accept that truth, you must also accept how urgently we need the masked-up troublemakers— as many of them as possible. We need risk-takers, Nazi-punchers, revolutionaries who defy the law. We don’t stand a fucking chance without them.

So… which side are you on in this fight? The side of Trump, the emboldened Nazis and “law and order,” or the side of those who wear black, cover their faces, and take direct action?

You may not agree with every action some of these masked-up folks are alleged to take. A mask is no guarantee of virtue, merely an indication that the wearer understands what we all should: a fascist is in power, and the state and its ever-increasing surveillance apparatus are our shared deadly enemy.

In local news, our mayor now wants New Orleans bars to close their doors at 3 a.m. while (in the Gambit’s reporting) “a network of law enforcement tightens pedestrian traffic.” Are you stoked about the proposed hyperproliferation of new license plate readers, “remote sensing technology,” K-9 units, and above all, the giant citywide system of hundreds of cameras feeding into a central NOPD databank?

All these exciting new #safety measures were unveiled mere days after NOPD Chief Harrison announced, during Carnival season, that anyone spotted wearing a mask in the French Quarter after dark would be summarily arrested… if they appeared to be protesting. If they wore a mask in daytime, they would be given the courtesy of a warning before arrest.

I find this troubling, since given our political climate, I am solidly on the side of maskers. Which side are you on?

IN CAMERA AND OFF CAMERA

When it comes to crowd control, NOPD’s 8th District, responsible for the French Quarter, has two modes. One mode is unique to their precinct: a sophisticated multi-pronged set of strategies for corralling and subduing unruly groups of civilians. When that mode fails, as it did on the night of Friday, January 20th, the 8th reverts to the mode that is every other District’s default: busting heads and then lying their asses off.

“Turn off your body cameras,” an NOPD officer* yelled repeatedly. They’d waded into the anti-Trump crowd that fateful Friday night, grabbing for and indiscriminately whaling on every non-cop within reach. The group NOPD attacked was large—well over a hundred, augmented by bystanders who’d joined in.

Whether or not you know it, our freedom and future depend on people who are willing to risk arrest.

NOPD whipped the absolute living shit out of the 15 alleged protesters they arrested in the French Quarter on Inauguration Day, and if you doubt that for even a second, you don’t know anything about NOPD. After the ass-beatings came the lies— miraculously, the 15 unfortunates NOPD happened to snatch out of the crowd that night just so happened to be responsible for absolutely everything. That’s according to the arrest reports, which are exact duplicates with only the names of the arrestees changed, something the judge at the subsequent arraignment criticized repeatedly. Nevertheless, the charges are piled high for the #J20NOLA arrestees, each heaping helping of felonies topped with the grim cherry of a charge for “Masking.”

ROSES ARE RED, VIOLENCE IS BLUE

The violence of NOPD, while extreme, was fairly typical of this notorious and thoroughly discredited cesspool of badged thugs. Oddly, however, it was the protesters themselves whom some affixed with the epithet “violent.” If you think NOPD aren’t violent, it’s hard to know where to begin. NOPD kill people. NOPD rape people. NOPD routinely beat the hell out of people—and overwhelmingly, they target poor people of color.

Meanwhile, these “violent” alleged protesters are accused of property damage. Not hurting people, but damaging mere things. They’re accused of breaking the windows of the banks who demolished our economy and rendered thousands houseless, accused of spray-painting slogans against the terrifying tyrant who that day formalized his grip on America’s reins.

Of course there’s always a couple cops who claim to have been injured, though just as in Baton Rouge during the Alton Sterling protests last summer, press-conference boohooing about police being maimed by flying bricks never seems to end up backed by specifics. We know one officer is out of action after damaging his knee running somebody down. That gets called “felony battery of an officer” and carries a multi-year prison sentence.

Contrasted to NOPD, anyone would look like a saint—including the 15 kids now facing years or decades in OPP for allegedly writing “Fuck Trump” on a Starbucks.

The insane overcharges piled on these young people’s heads are part of a pattern. Earlier that same Friday, in Washington D.C., credentialed press and legal observers were scooped up along with masked protesters and given unprecedentedly heavy felony charges. The message from the police state is clear and chilling.

Obviously these 15 kids facing felonies are only a drop in the bucket of blood that is our city’s horrendous “criminal” “justice” system, but I’m here to tell you that whether or not you know it, our freedom and future depend on people who are willing to risk arrest. It’s true locally, it’s true nationally, and it’s true beyond the arbitrary and entirely fictive borders set by the government entities claiming dominion over Earth.

You might not be comfortable risking arrest. If you’re white and of at least middle-class means, you might be able to avoid arrest even as more and more of those who actively resist are shredded by \ the pointy teeth of our District Attorney, the rabid rat terrier Leon Cannizzaro. You might be able to hide from what’s happening an keep inventing reasons why fighting oppression should follow rules the oppressors set.

There are words for people like you, hard words weighted with history, with the blood of all those who suffered while “good” and “respectable” folk did their best to go about business as usual.

As always, I would urge you to study your conscience and side with the maskers. A great step would be contributing, even anonymously, to the arrestees’ legal fund. 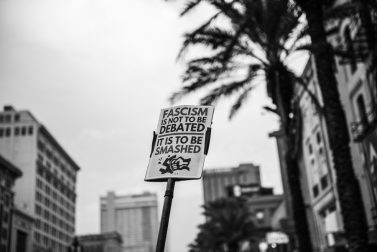 WON’T SOMEONE PLEASE THINK OF THE CRUISERS

But enough about those who committed the outrage of masking, nu? When there’s alleged wrongdoing, it’s important to center the voices of the victims. Readers of NOLA.com or Mayor Landrieu’s Twitter were treated the following Saturday to exactly that: a bathetic essay by spotlight-chaser and “local” Fraternal Order of Police mouthpiece Jake Lundy, consigned to desk-jockeydom after shooting a man in the ass.

Lundy’s letter seeks to emphasize the seriousness of Friday night’s actions by stirringly eulogizing the NOPD cruiser allegedly damaged by the protesters. Lundy declares police officers’ vehicle “their chapel,” meaning vandalizing one is not merely a gesture against police or private property but blasphemy— profanation of a religious site.

“Most people,” Lundy assures us, “will never understand our relationship with these cars.” Likely true—even other branches of law enforcement, namely the feds and the state troopers, have been befuddled and frustrated by NOPD’s staunch refusal to leave their cruisers and actually walk a beat. Now it’s clear, however: NOPD aren’t lazy, they’re just extremely pious. They’re in their chapels… constantly praying, one must assume!

Lundy’s letter runs through a timeworn greatest-hits medley of anti-protester tropes, including the centuries-reliable dog whistle of Outside Agitators. The protesters were “‘anarchists’ from Portland,” sneers Lundy, who hails from legendarily gritty Athens (Georgia) and moved here after Katrina.

He concludes by solemnly mourning that the SUV in question will be unable to participate in an upcoming officer’s funeral parade. Openly comparing a car getting paint on it to a cop being killed strikes me as being in doubtful taste. “Blue-and-white automotive lives matter!” Then again, ¯\_(ツ)_/¯ The letter is so absurd that even the ultra-reactionary NOLA.com commenters fell about laughing, mocking Lundy’s taxpayer-funded “safe space” and calling the car “Pastor Snowflake’s cruising cathedral.”

WHEN MASKS ARE OUTLAWED…

If you haven’t faced a felony in New Orleans, I’m not sure you can imagine how terrifying it is. Whatever you think of some alleged broken windows, the long fight for the #J20NOLA arrestees will provide all of us with opportunities to show solidarity against oppression and with dissent. There will be countless hearings, and the fundraisers are ongoing.

A big part of how systemic repression works is through making us feel alone: our experiences of mass oppression are deeply isolating. Think of poor people ground down by capitalism and denied opportunity, each bearing a personal sense of shame for a poverty that is systemically imposed. Think of women privately experiencing shame for the gendered harassment and assaults they all experience under patriarchy.

Do not let dissidents with the courage to protest feel alone. Support them, materially and emotionally. Support them online and in person. Recognize our common enemy and demonstrate solidarity. Doing so is in your own interests. We are at war against fascism. It won’t be polite, and it won’t be won through obeying the fascists. There are Nazis to be punched. We need masked idealists.

For more info on the #J20NOLA arrestees and how to help, check out tiny.cc/j20nolasupport

*The print version of this article incorrectly identifies the officer as Brian McAdam, when in fact no such person under that name is currently employed by NOPD. ANTIGRAVITY regrets the error.